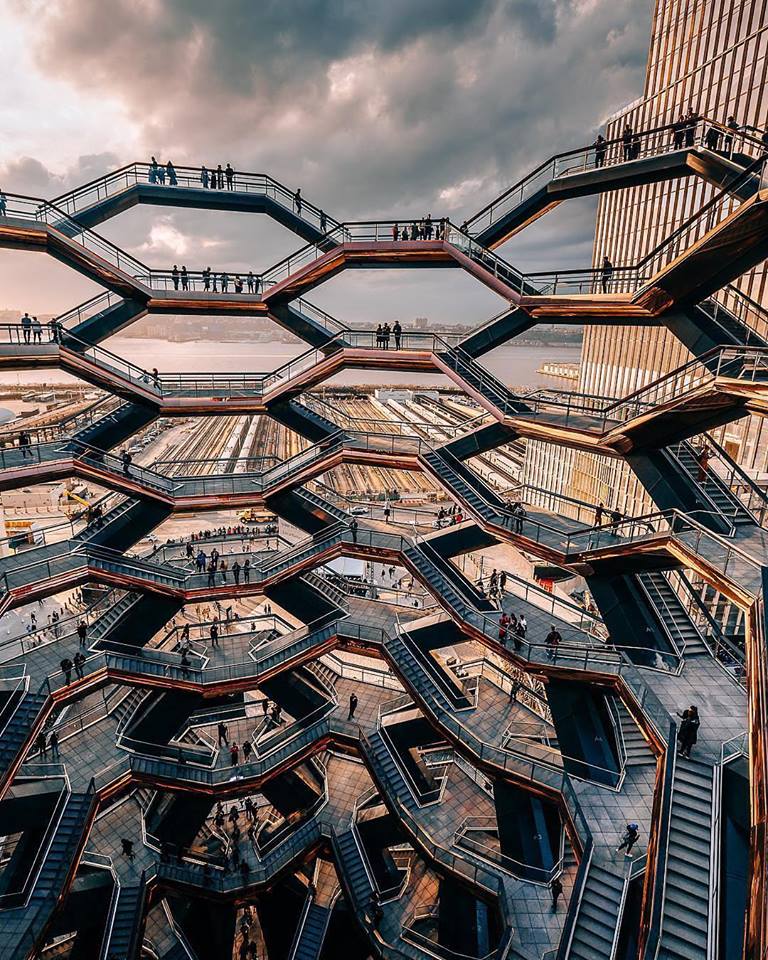 The first pick was given in 2012. After 7 years of work, New York's new sustainable neighborhood, Hudson Yards is completed, in its first phase. Work will continue, however, until 2024, for a complete completion of this “mega project” which will have cost 25 billions of dollars. The hour of inaugurations has struck. This 15 mars, shops and restaurants will be part of the celebration, although shops have been open there since 2015, but the highlight of the show will surely be access to the monumental structure "The Vessel" which sits in the middle of the 1,5 million m2.

Imagined by famous British designer Thomas Heatherwick, this spiral staircase, top 45 meters, is made of 154 stairs interconnected, is 2.500 marches. A technical feat, architectural but also artistic. To access this staircase at 200 millions of dollars, reservation is required. Open every day, from 10 hours at 19 hours, from the 15 mars, access to this new architectural treasure is free.

In terms of colossal projects, Heatherwick is not ready to try. The designer of 49 years, at the head of a team of 100 people in his London office, collaborates with renowned architects like Barjke Ingels or Norman Foster, on projects like Google’s headquarters in Mountain View in California or The Bund Finance Center in Shanghai. Passionate about sculpture, we owe him the “Paternoster Vents”, in London. Without doubt one of the first sketches of The Vessel…

To reserve your place it is here : https://www.hudsonyardsnewyork.com/reserve 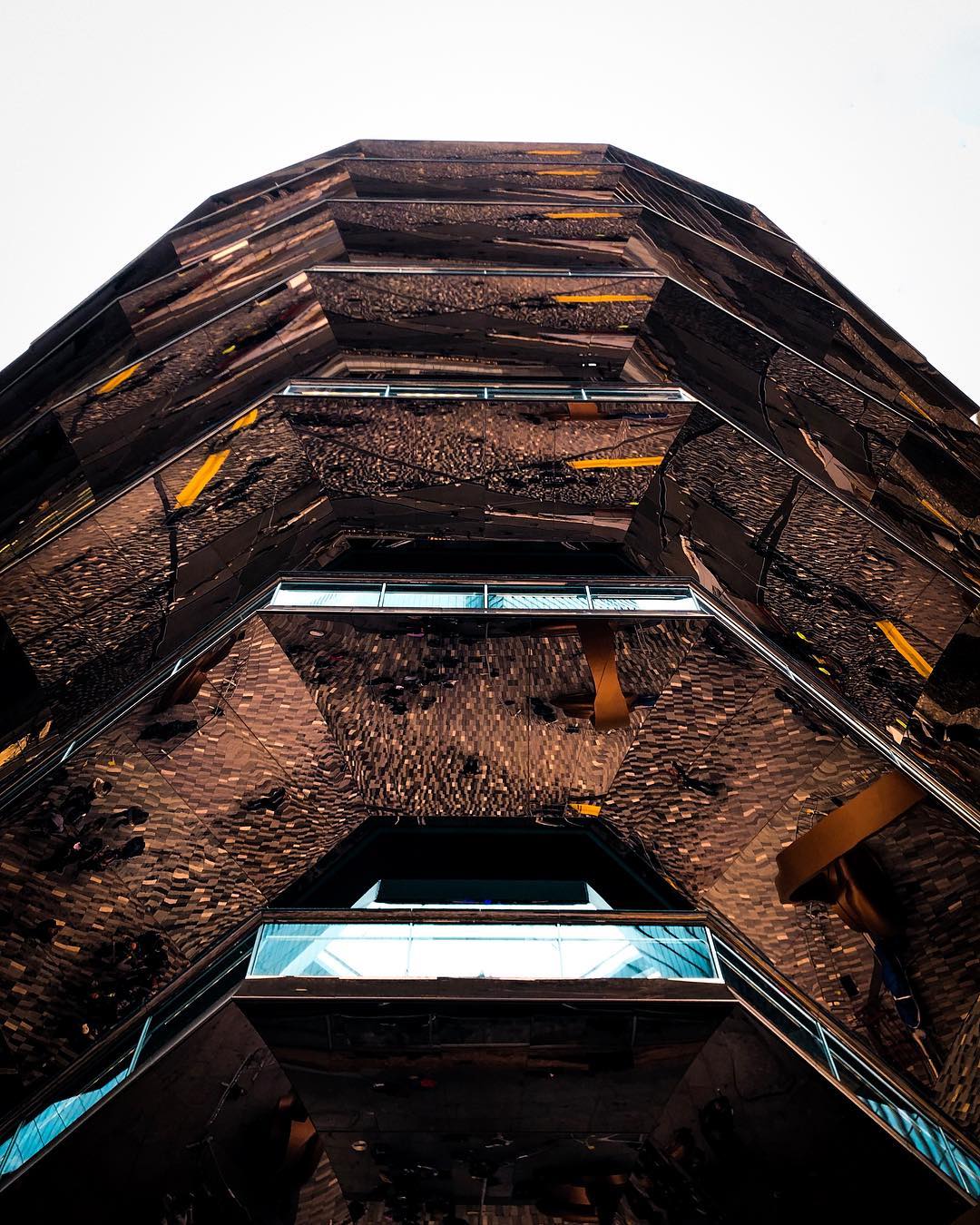 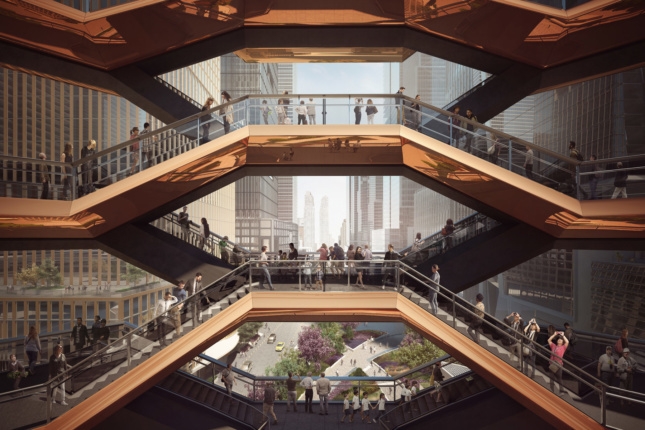 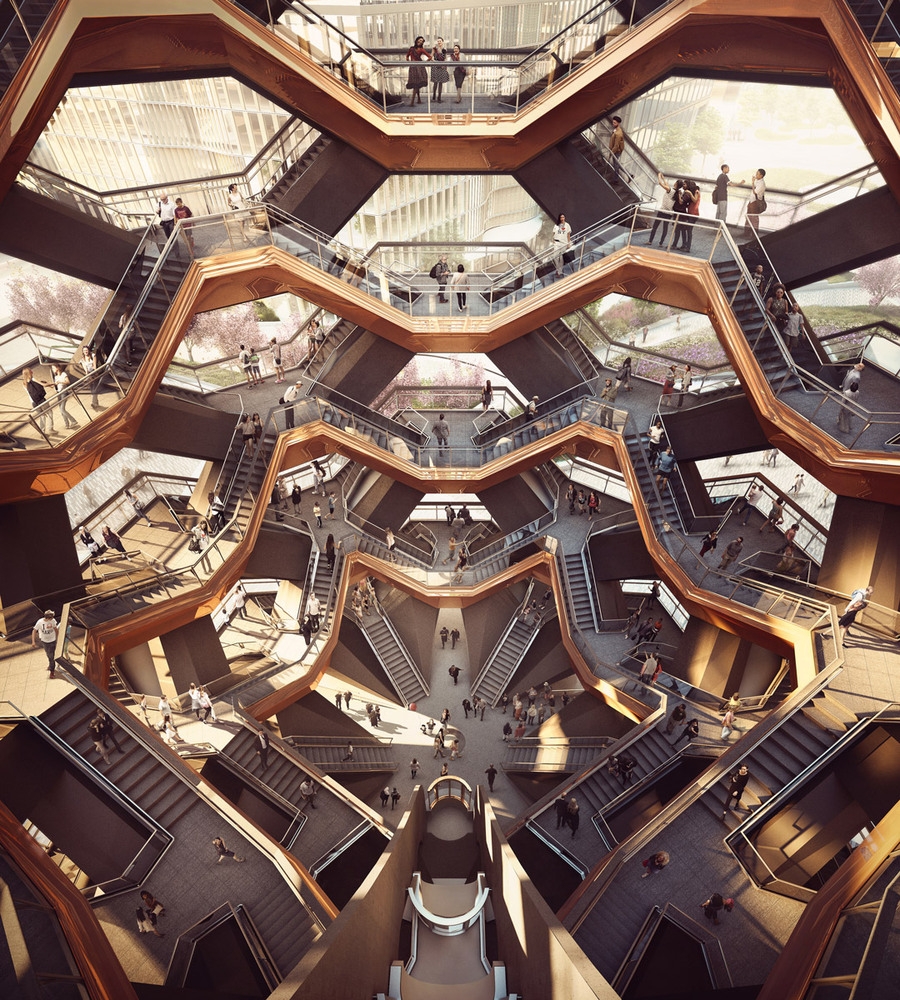 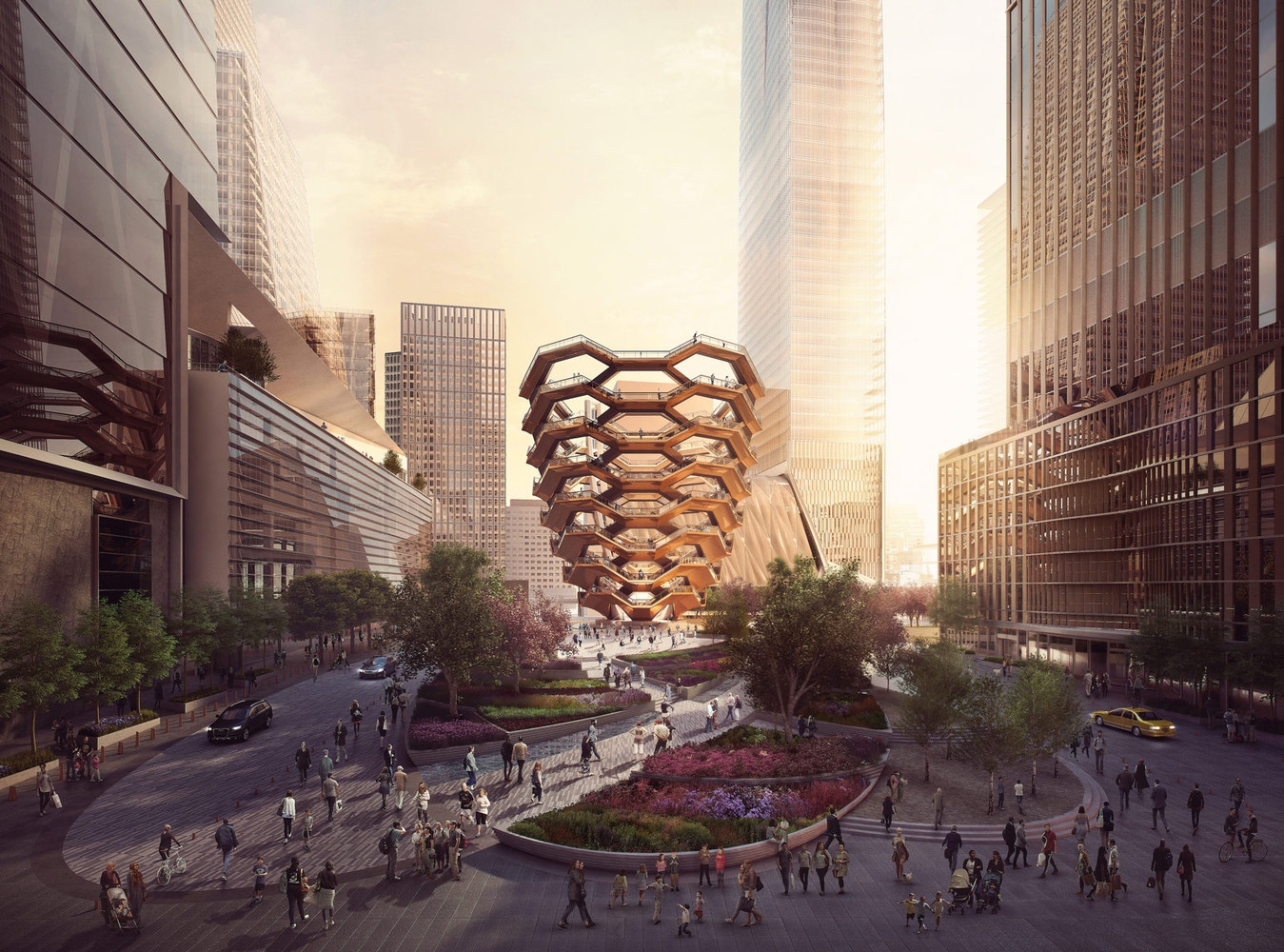 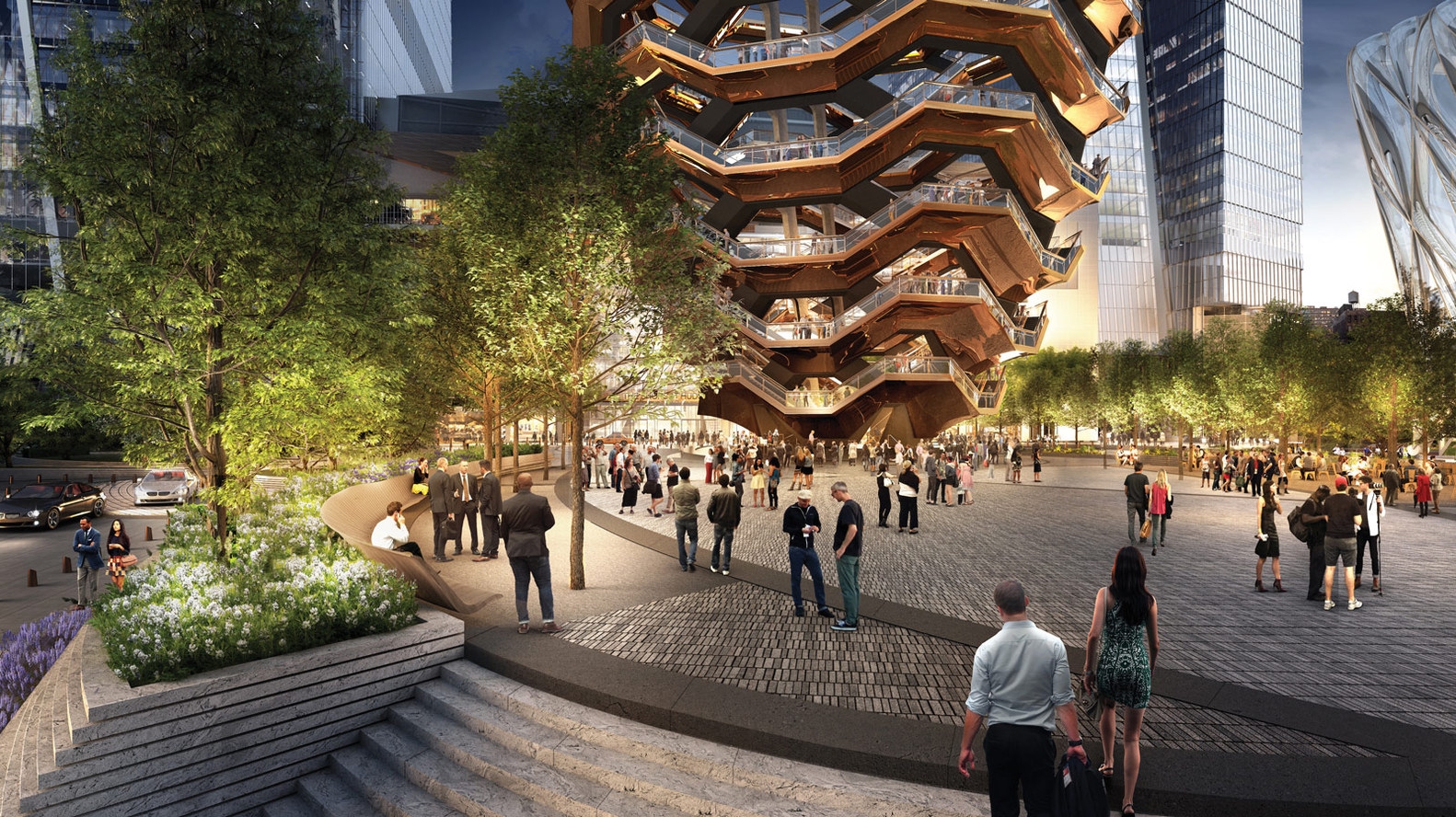 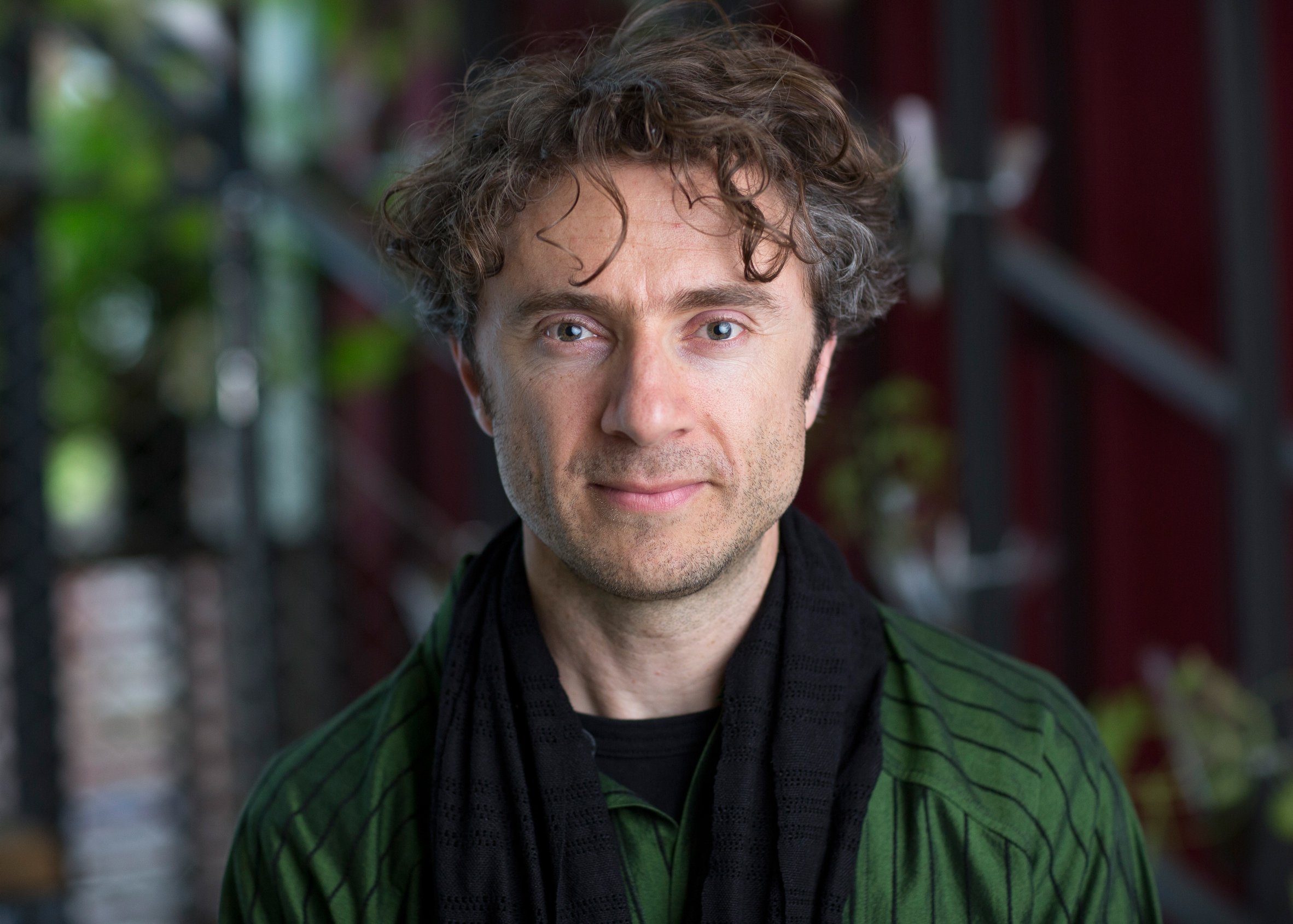 Thomas Heatherwick, founder and design director Heatherwick Studio:
Is one of the greatest designers in the world whose career has taken him from New York to Singapore ... and from London to Shanghai.

Thomas Heatherwick: founder and director of Heatherwick Studio design is one of the greatest designers in the world whose career has taken him from New York to Singapore ... and from London to Shanghai.

Here we look at five of the most impressive construction projects! Heatherwick revealed plans for the canal side shopping center in King's Cross, London

2. Garden Bridge goes to construction despite the ongoing controversy.

3. BIG Heatherwick and reworking the design of Google HQ for the smaller Mountain View site

4. Heatherwick launches for the channel side of the shopping center King's Cross, London

5. Products and buildings are the same, this Heatherwick, while designers are turning to architecture. 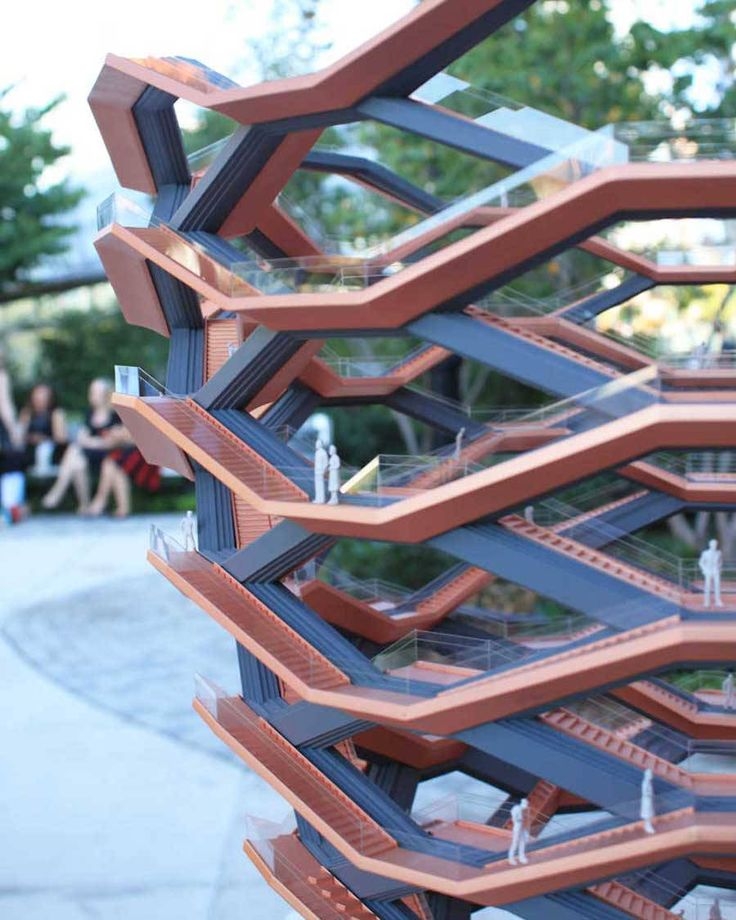 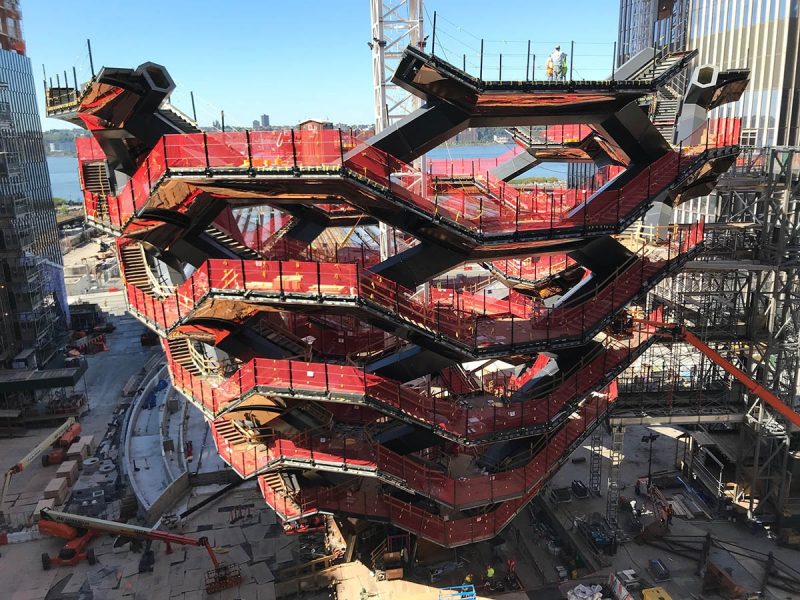 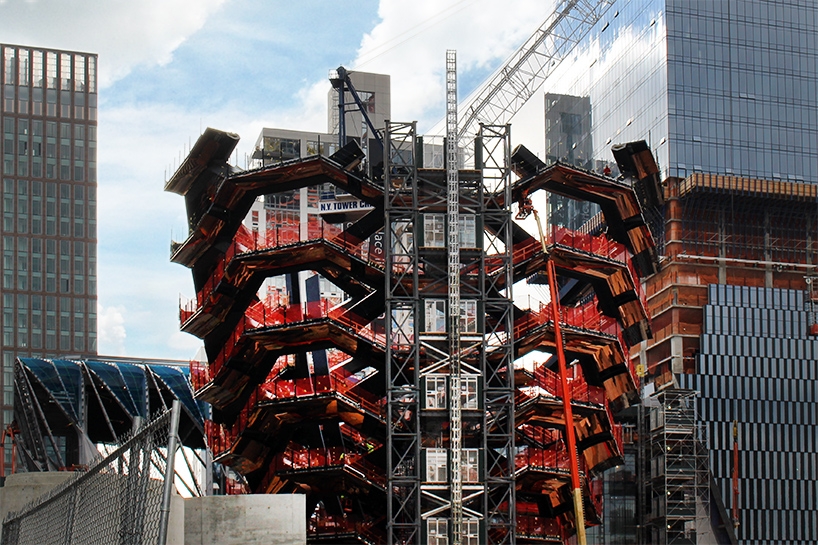 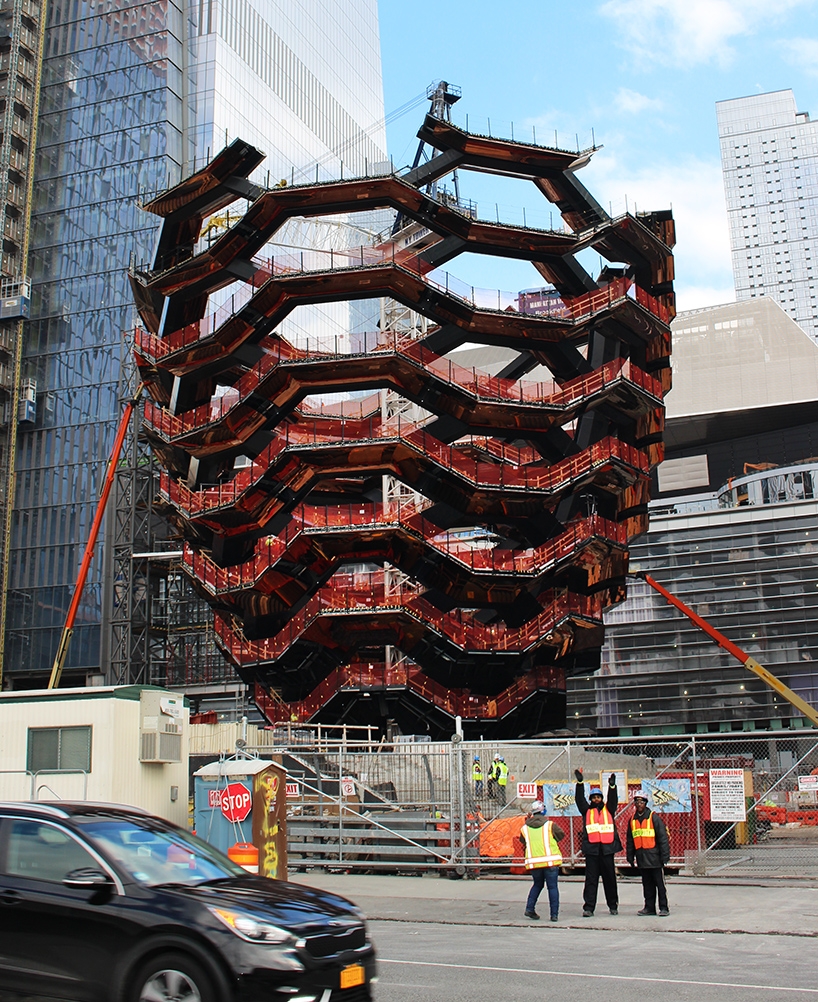 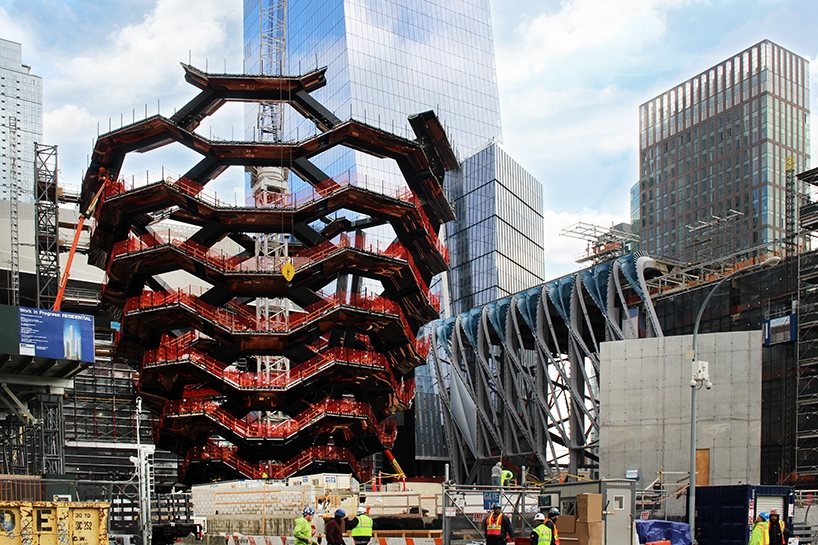 called ” Vessel “ – Hudson Yards, New York. The first plans show that the giant red structure began to take shape, and five floors of movement of the structure is almost complete.. 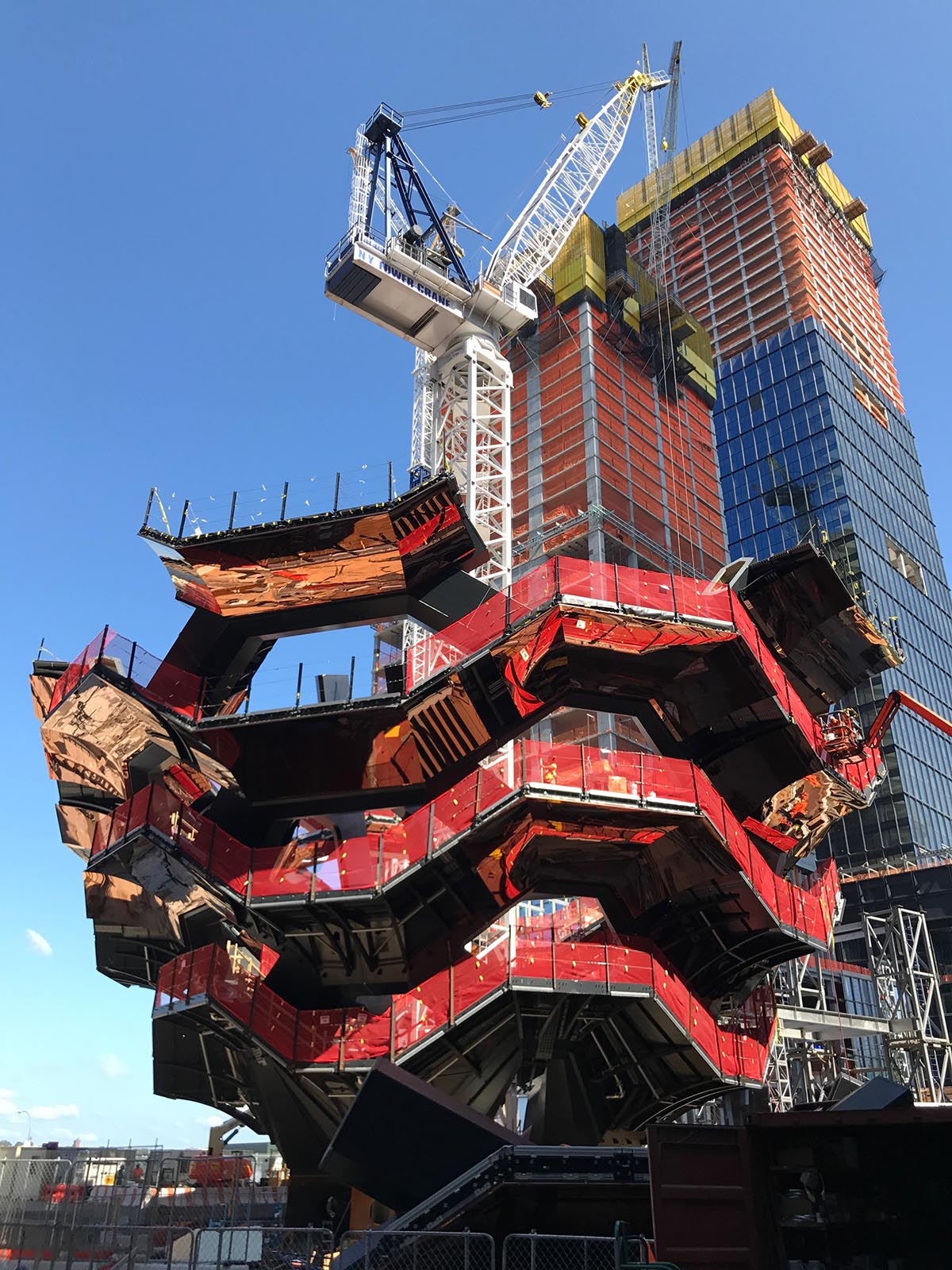 Starting construction in April of this year, the huge steel staircase will be a public centerpiece for Hudson Yards, a new development 11 hectares (110 000 square meters) located in the Upper West Side of Manhattan, over a huge yard. 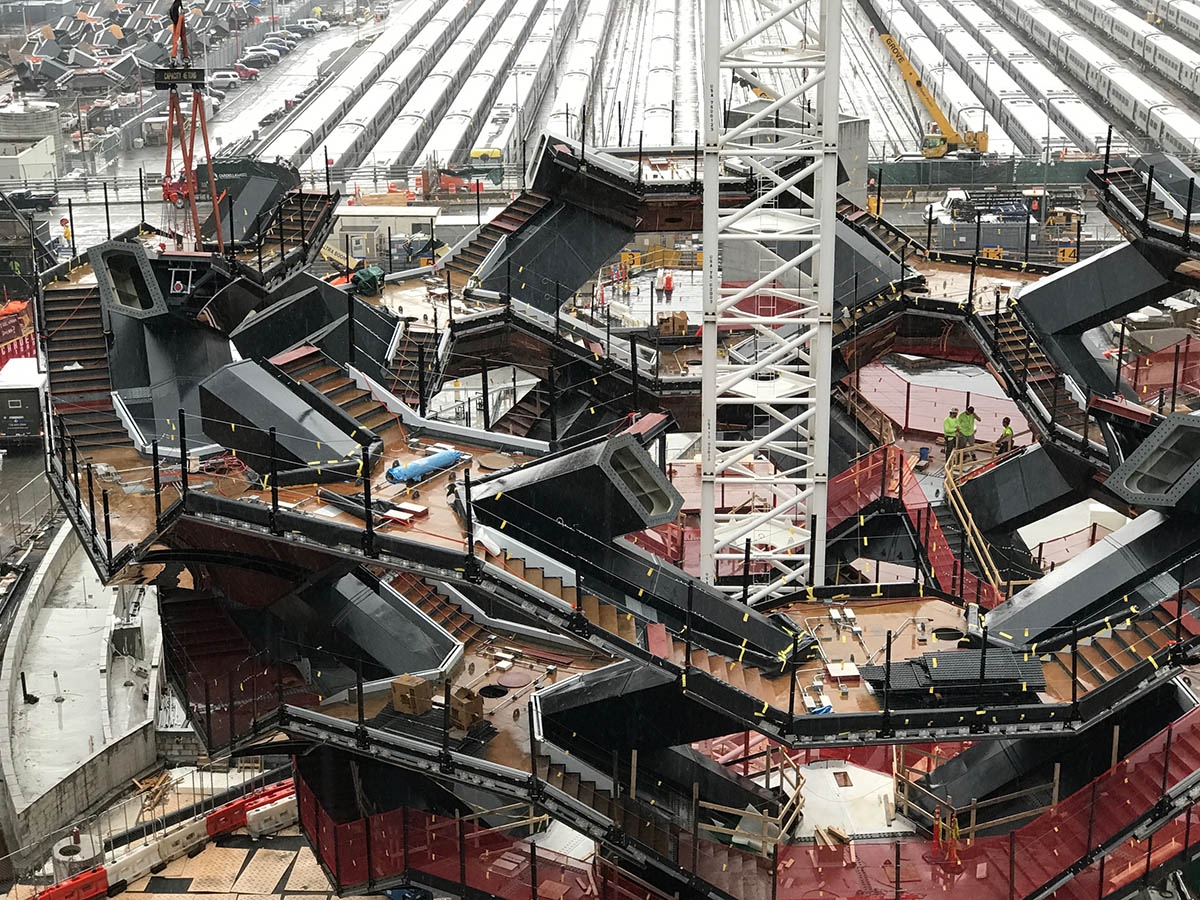 80 individual platforms are prefabricated by Cimolai SpA . in their Monfalcone, an Italian manufacturer and a steel structure construction company, and shipped to New York where they will be assembled on site. 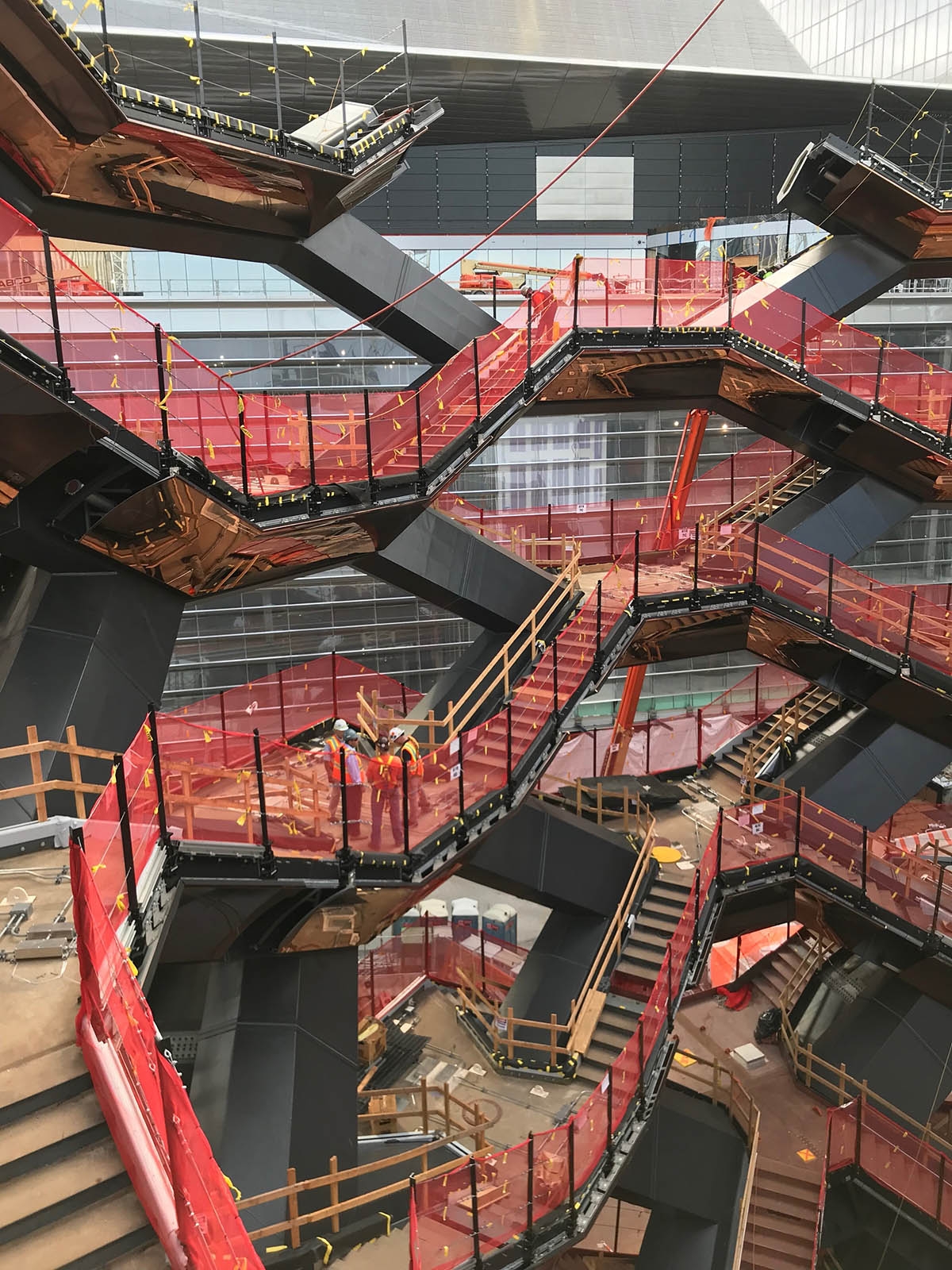 The Heatherwick Studio company Thomas Heatherwick has created a massive public staircase waterfall that visitors can directly use, touch and create a sense of belonging to its bold iconic structure. The draft Heatherwick is as playful urban landmark that visitors can climb, spend time and explore different feelings related to its complexity and materiality. 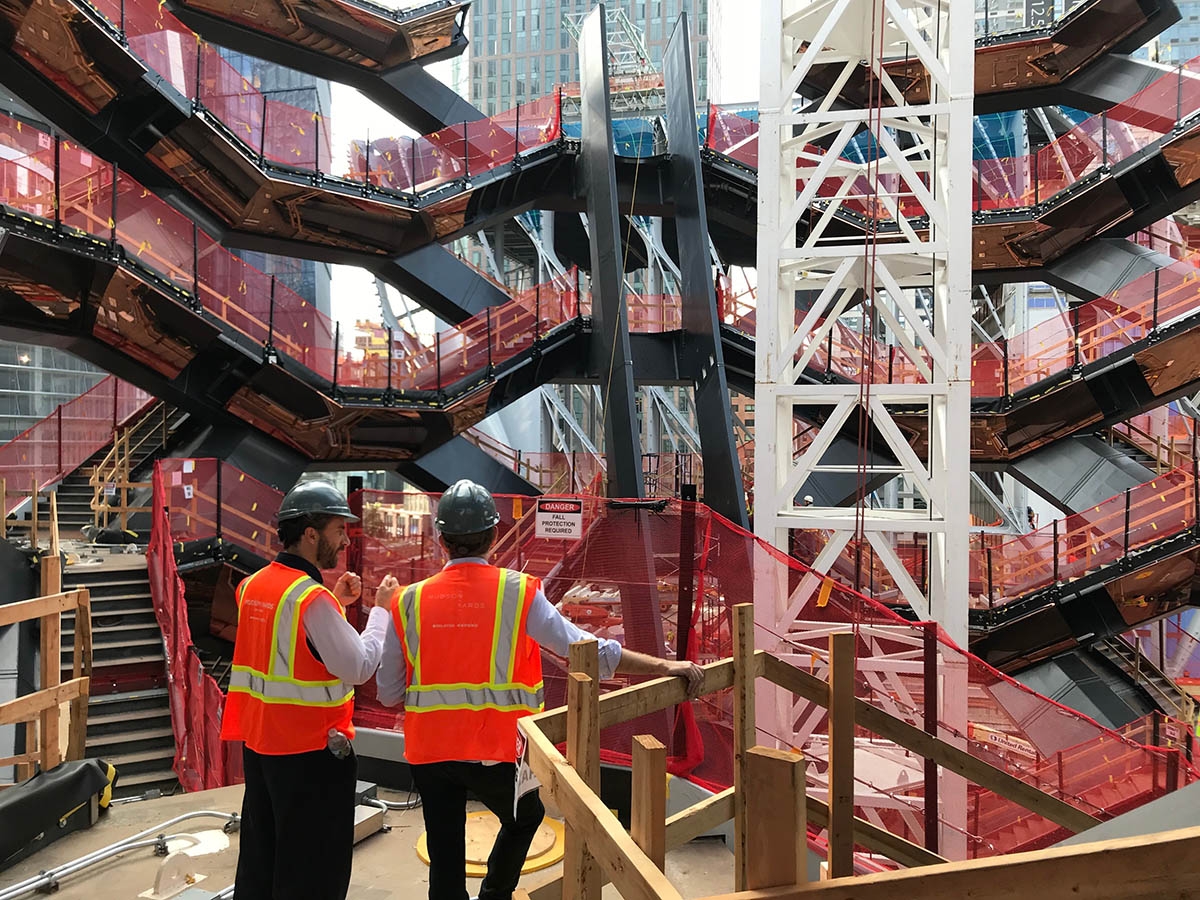 Inspired by ancient stepwells India, the studio has sought to evoke the powerful effect of their not repeated, flights and landings that reach land. The structure is composed of 154 stairs interconnected, from 2 500 marches and 80 individual platforms arranged around its vertical perimeter. “The effect of up and down the stairs of the ship creates a personal rhythm in visitors”, said Heatherwick Studio. 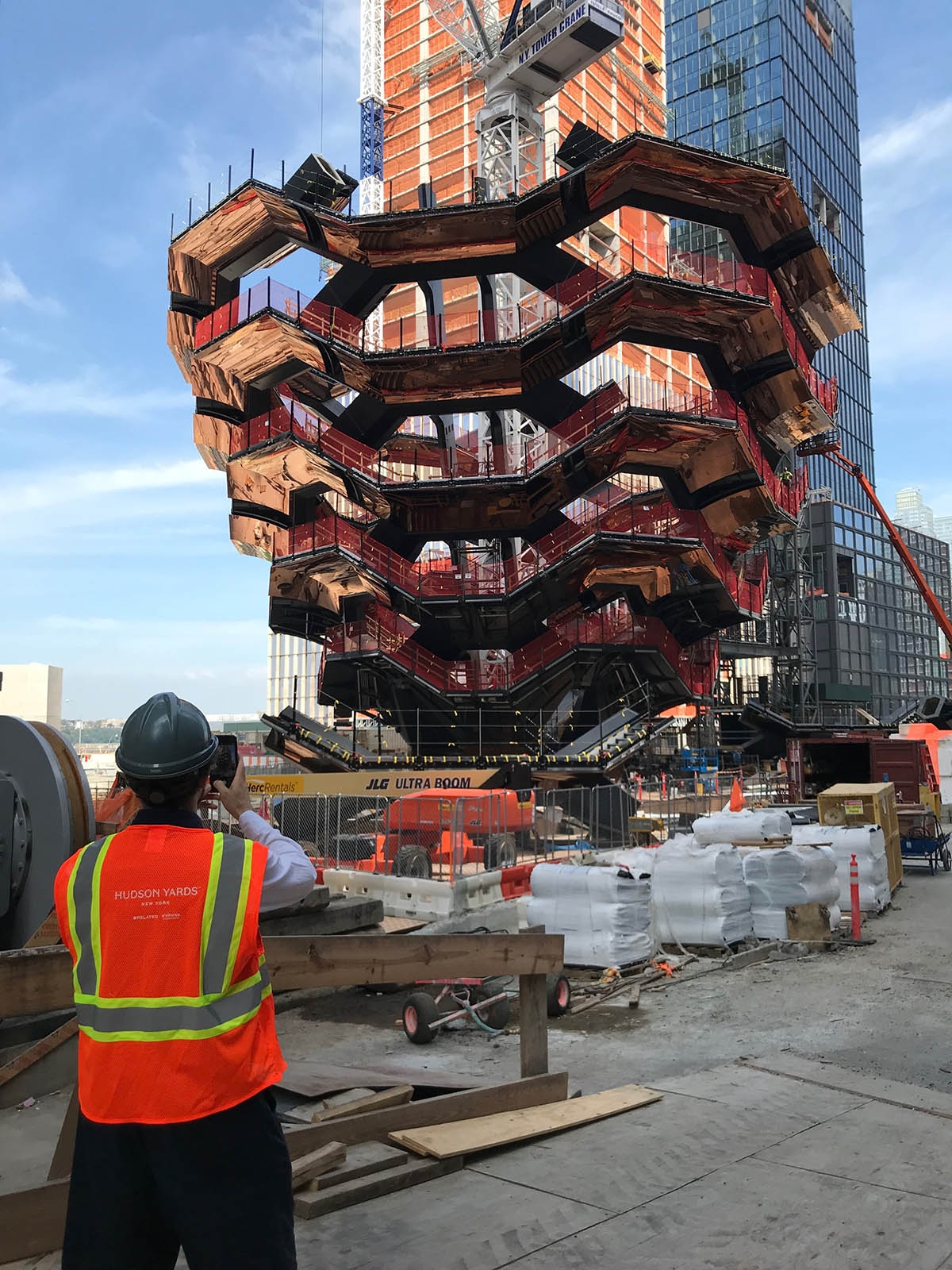 The project, derived from the idea of ​​Stephen Ross – President of related companies , one of the developers of the project, should cost 200 million in total. The structure of 46 meters high is made of polished copper below, contrasting with flood painted steel surfaces of complex architectural framework. Each component of the structure weighs almost 100 000 books. 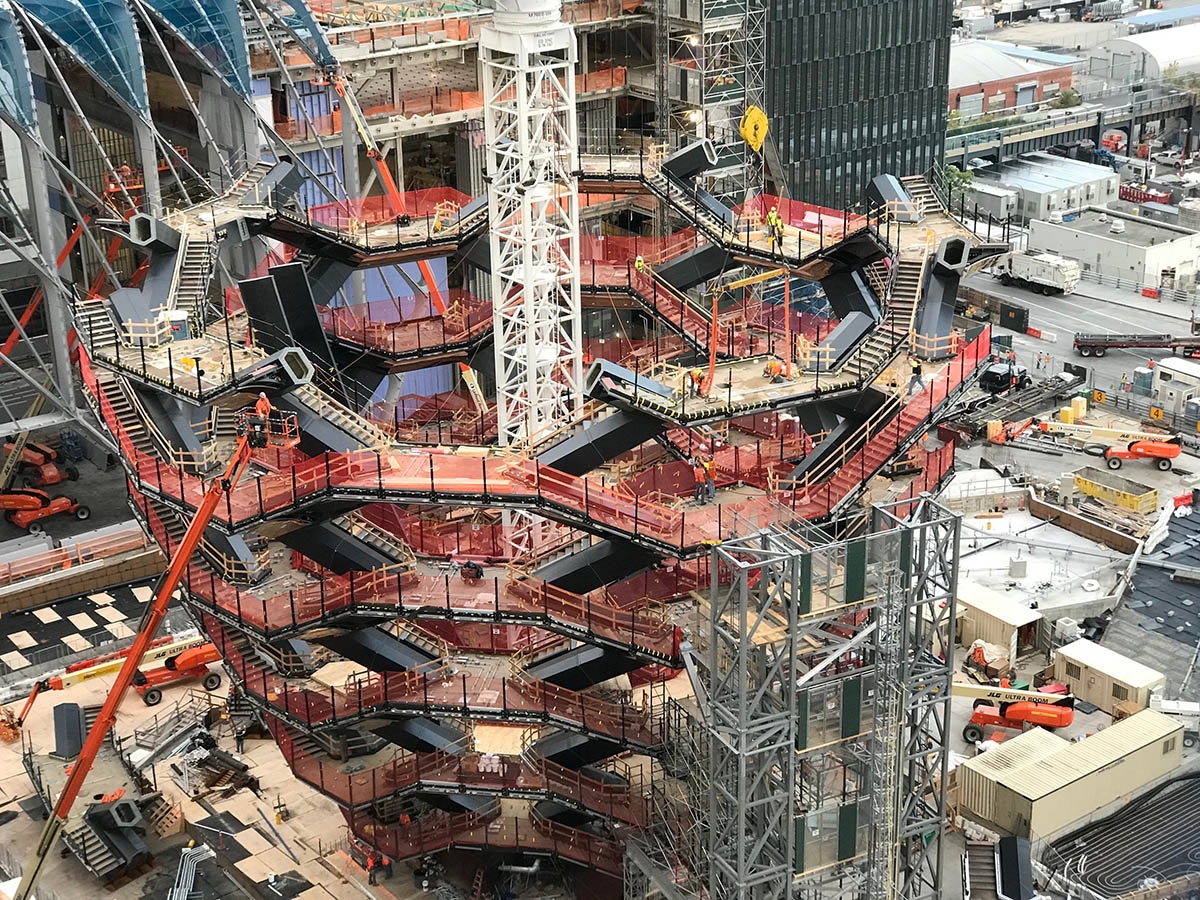 Animating the structure with reflections of the surrounding city, this giant will form a vibrant urban intervention at the heart of this great new neighborhood. “Vessel is the Hudson Yards plan to create a significant public inheritance to New York”. 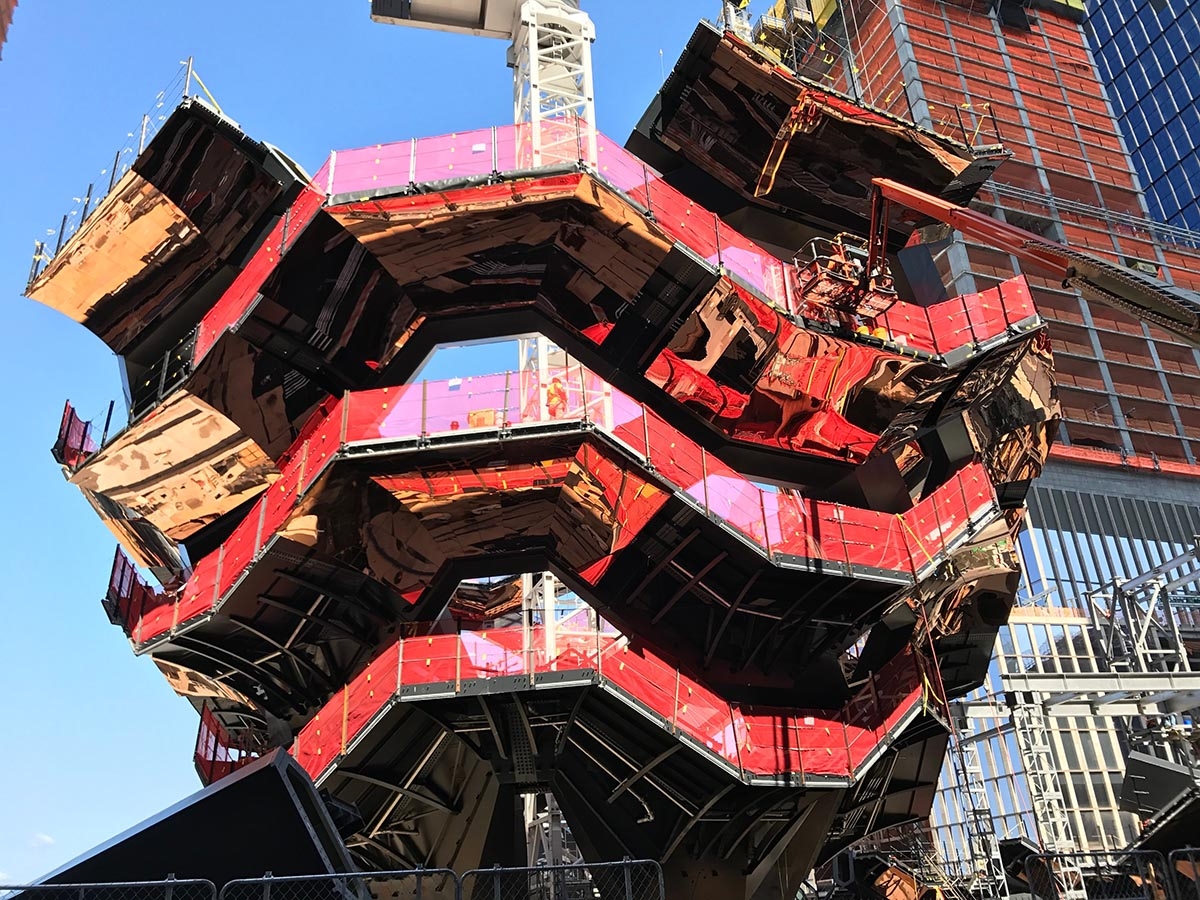 Encompassing a total area of 2 210 square meters, this massive structure host 1 000 visitors at a time, as described by Stephen Ross in one of his statements. The ship should be completed by the end of this year and should be open to the public in the fall 2018, and all of the public square and gardens. Heatherwick Studio has unveiled the first conceptual images for Vessel in September 2016. The studio works in close collaboration with AKT, CIMOLAI, the landscape architecture studio Nelson Byrd Woltz , Kohn Pedersen Fox Associates and engineering firm Thornton Tomasetti on this project. Hudson Yards is developed by related companies and Oxford Properties Group.

As soon as that I would have new Photos I will put you right here : 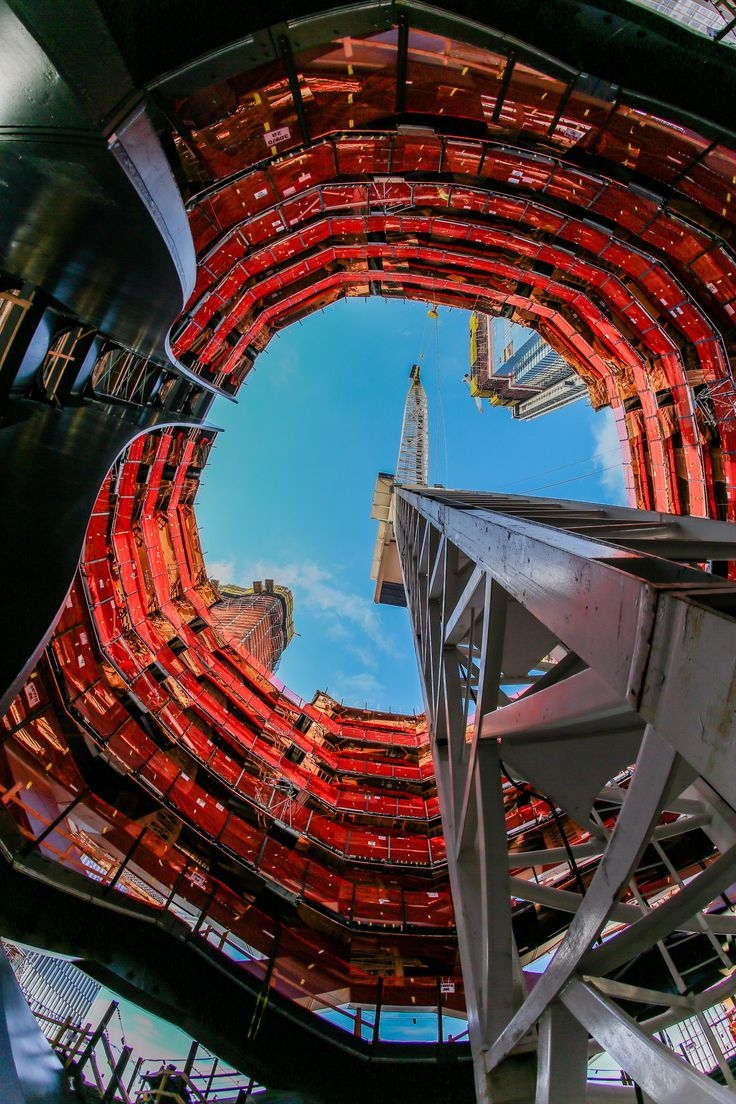 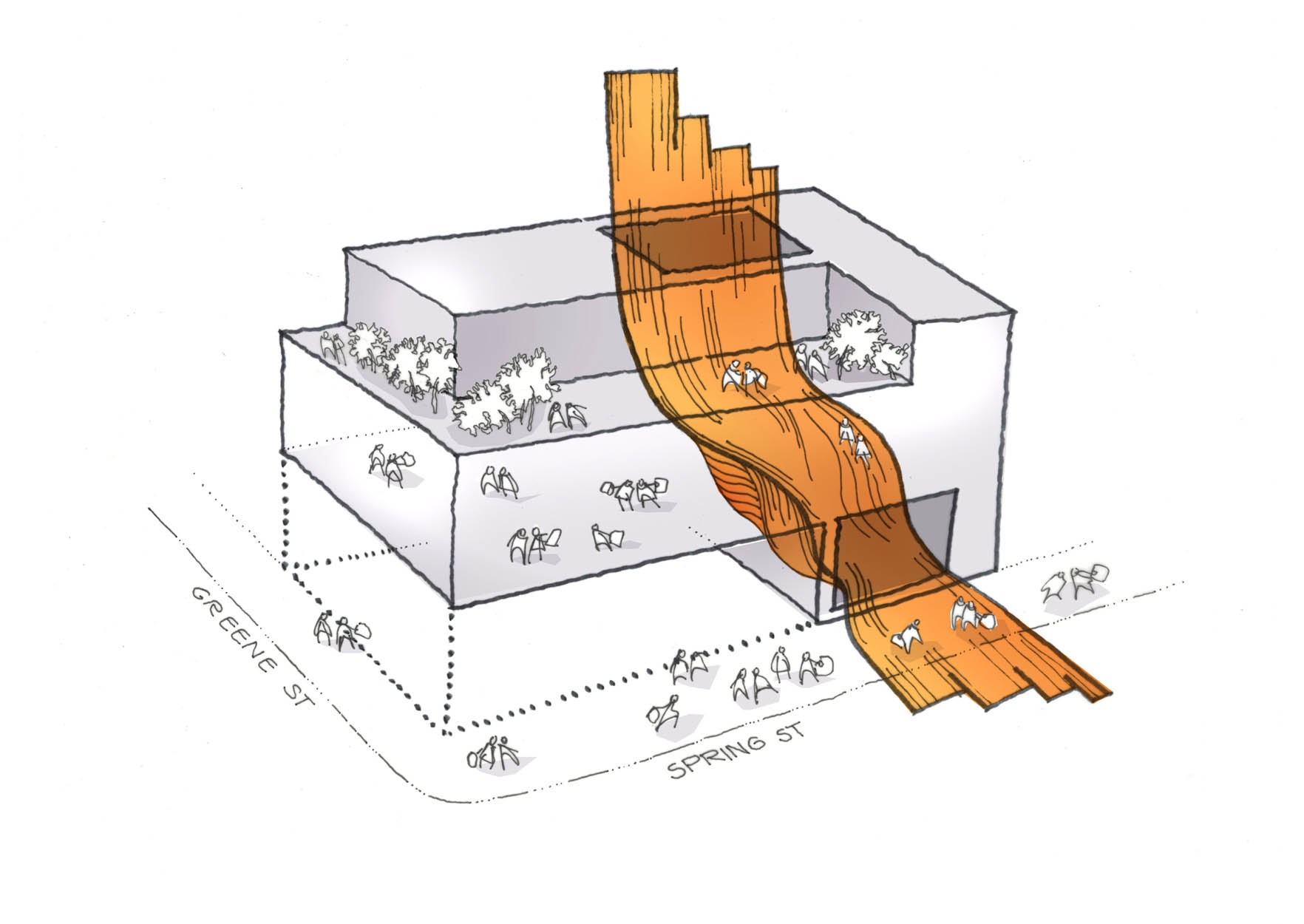 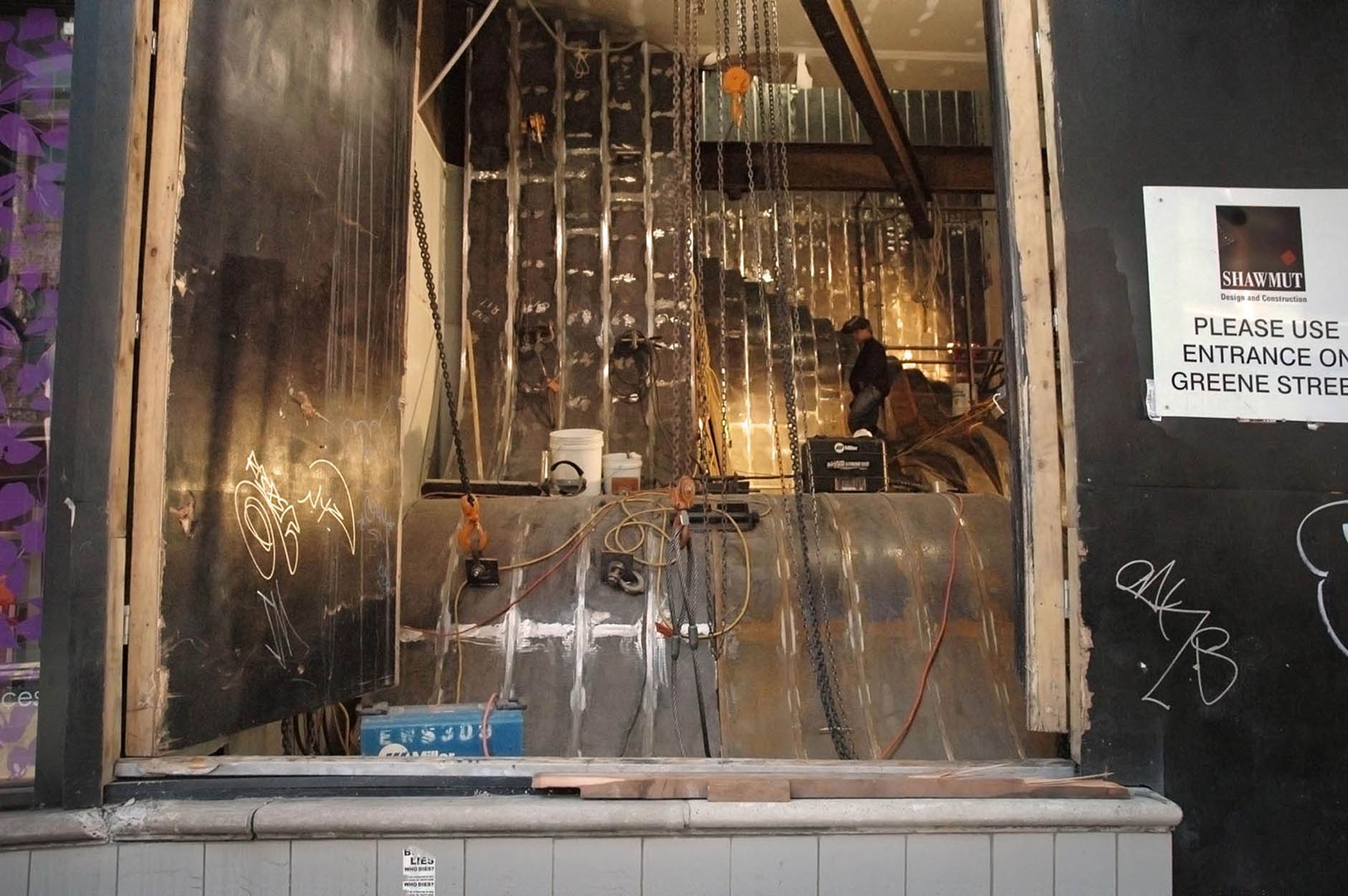 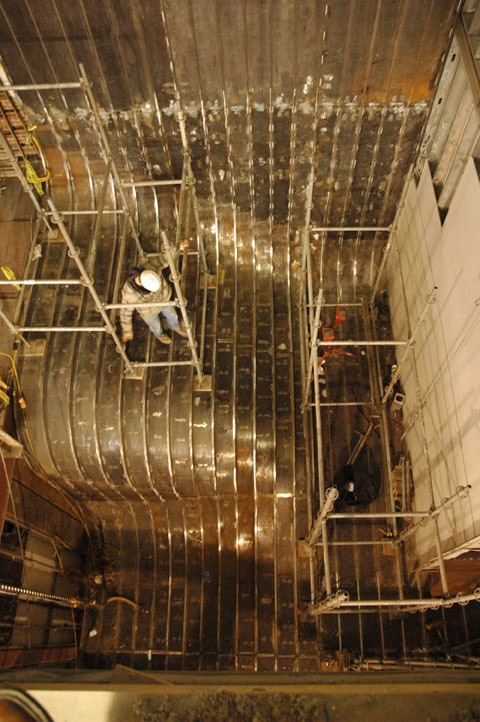 Magasin Longchamp de New York, Heatherwick Studio.
This store belongs to a major brand specializing in accessories and leather work. It was built in 2006 with an innovative design with the & rsquo; staircase being the & rsquo; distinctive element compared to d & rsquo; other local.

This space is divided into three stages, the first is the most important and in which we will focus to the & rsquo; analysis of local. This plant has a structure which forms a succession of different levels through the curves to achieve the & rsquo; next stage.
It is also achieved by placing an open and fluid staircase in the center, which helps the three floors are visible from all its extension and it n & rsquo; there is no obstacle to the passage of light.
L & rsquo; staircase we have mentioned gives the & rsquo; space fluidity and dynamism through the curves and inequality that mimic a current d & rsquo; water that falls to the ground. This causes a feeling of imbalance, d & rsquo; & rsquo asymmetry and, instability.
L & rsquo; within this store seems to s & rsquo; inspire works of & rsquo; Art Nouveau of the late. Nineteenth and early twentieth. This style was destined to break all previous ideas based on the representation of natural forms and the & rsquo; incorporation of industrial materials such as iron and glass. These characteristics can be observed mainly in the & rsquo; staircase and exhibitors from our store. L & rsquo; staircase, as we & rsquo; have said, represents a kind of cascade as it joins the various levels, is made of & rsquo; hot rolled steel for the structure and the curved glass balustrade. 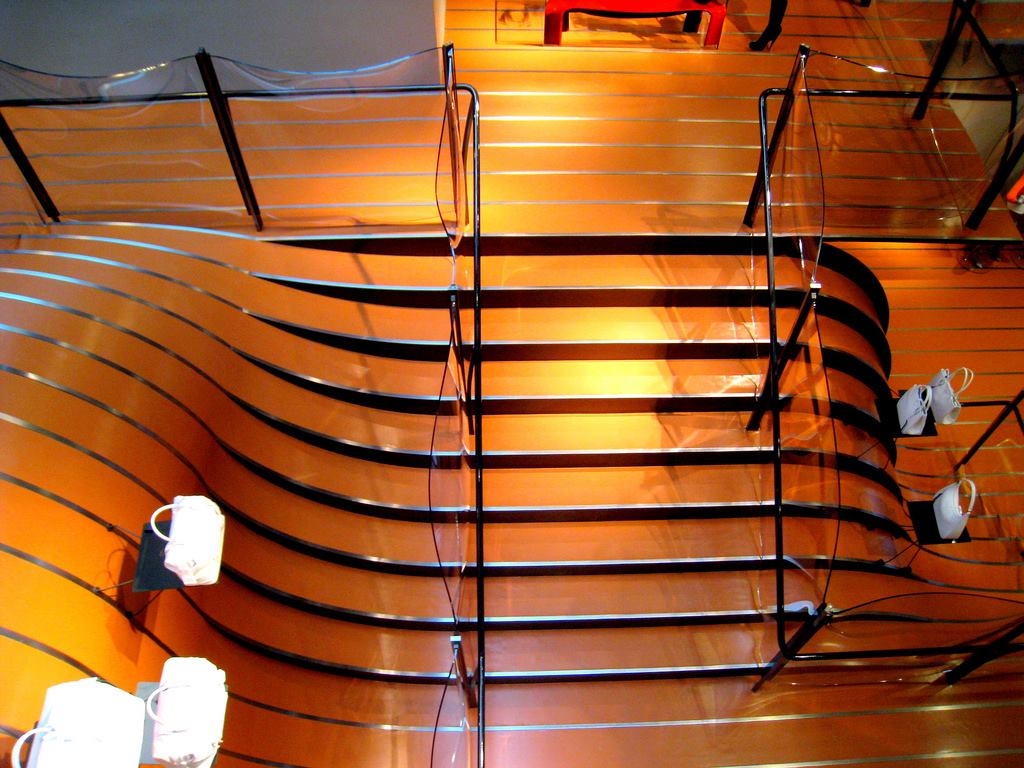 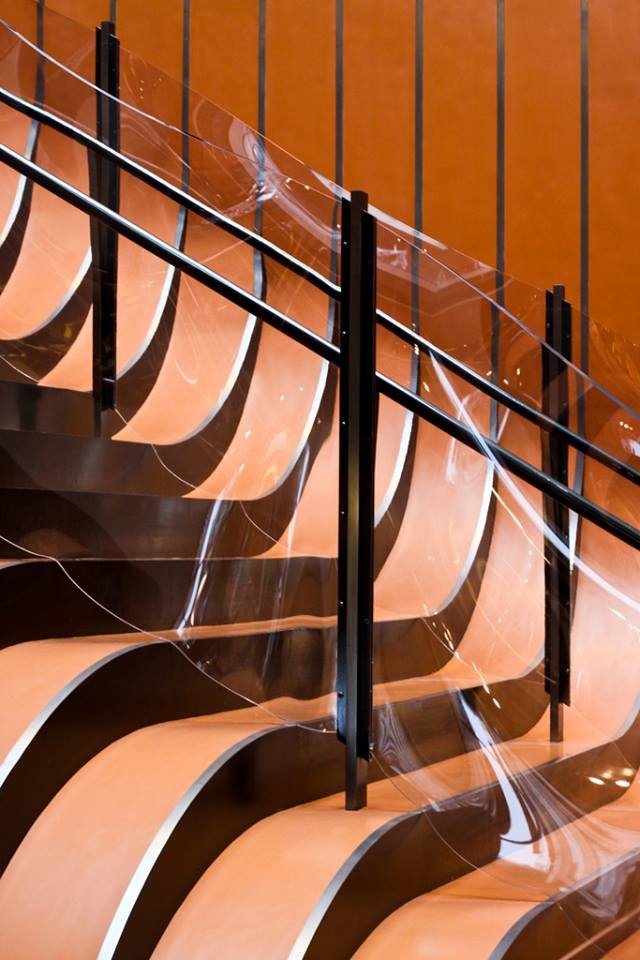 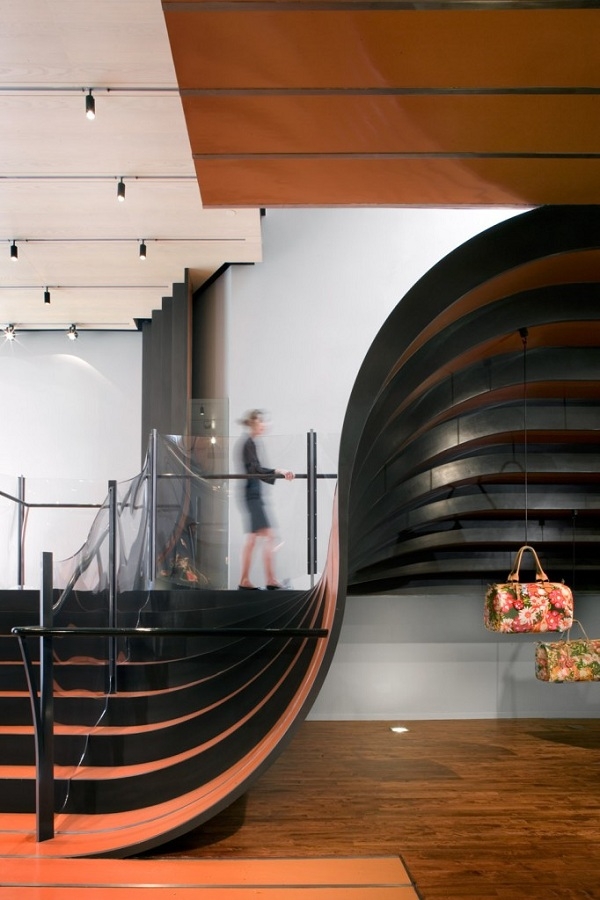 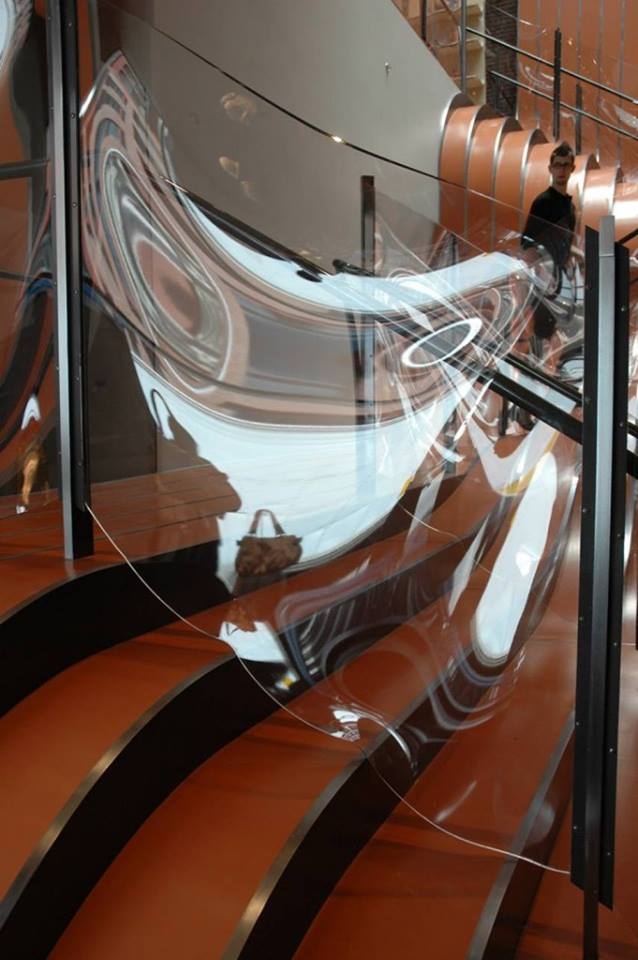 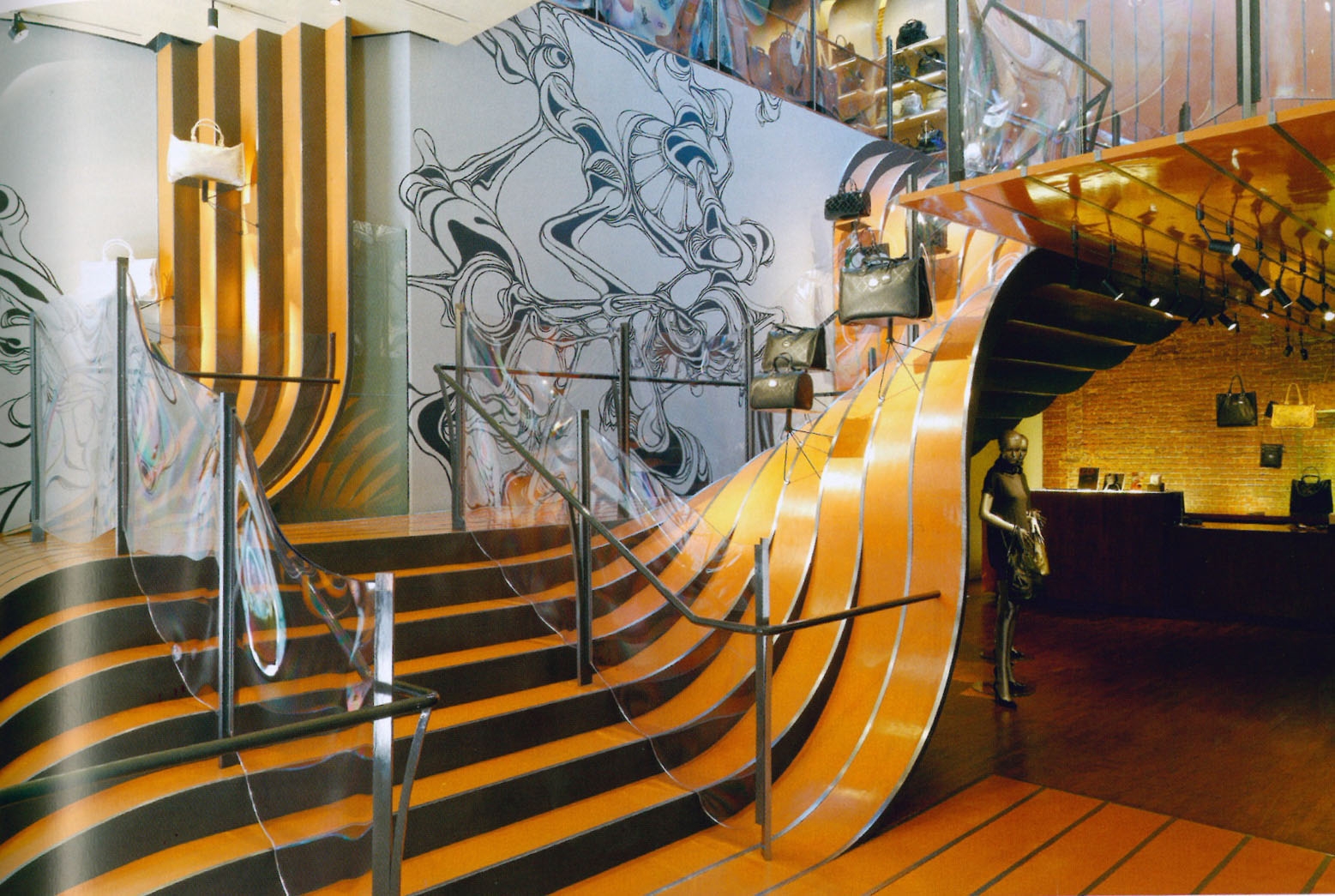