History of the water castles (U.S.A)

A water tank formed over 1000 parts of plexiglass

All civilizations have faced there, since the water tower marked an evolution both technical and organizational. So, Rome had 19 aqueducts, 250 water towers and 1352 fountains that the water was channeled into the city 100 A.D. The water tower has been sidelined for some time, replaced by the system of "water carrier". It was in the 19th century that the water tower reappeared : the water tower is linked to the development of steam railways, consuming lots of water. The water is obtained from a deep well with an electric pump.

The inlet pipe enters the reservoir from the outside top. The outlet tube is threaded into the side of the reservoir just above the floor, and is automatically closed by a weight. Once the galvanized iron spout is pulled by the hands of the train and the rear end of the nozzle hits the outlet of discharge pipe, the valve is opened, which allows water to flow freely. The tapping method of the discharge pipe in the side of the vessel above the floor will get clearer water, because mud and sediments that gather on the tank floor can not be emptied into the pipe. The gauge mark to the height of the water in the tub is a mounting ring about a vertical post, as a mast, Roof. The ring or the circular disc moves up and down of the pole according to the height of the float in galvanized iron within the tank, allowing men railway to see from a distance how much water is in the tank, without having to wait until they get up TO and facing the reservoir.

In 1923, 23% common feature of a water distribution network at home and 30% rural communities in the aftermath of the Second World War. Between 1950 and 1970, Planning has resulted in many water towers construction for that 1980, almost all of French have home water. The water tower has experienced a decline phase 1980, following the emergence of underground tanks. A water tower is a structure intended to store water, and generally placed on a geographical summit to allow it to be distributed under pressure. Storing water in a reservoir acts as a buffer between the flow requested by subscribers and the flow provided by the pumping station.. It allows to avoid starting too often the pumps and protect. Such reserve also helps cope with exceptional demands in fire.

Built for the Universal Exhibition of 1982.

Every city deserves a skyscraper civic monument size to its preferred crop.

The Water Tower was built in Rosemont 1982 and has since become widely recognized for his work painting art, renewed 1990 and 1998. The large capacity (500.000 gallons) turn is inverted teardrop design modern. The Water Tower Rosemont goes against its bold, bright colors and pink design itself, which breaks the monotony of the structure and green stem red rose.

Decoration and landscape integration. It's hard to hide a water tower because it is often very high structures located on the heights. So, why not highlight them with decorations that can range from a simple one-time reproduction of a monumental fresco of the identity of a city or a region.

the Peachoid (known as The Peach) was ordered to be built in 1980-1981 by the Board of Public Works Gaffney, and contractors took five months to design and mold steel. A sheet of seven tons, 60 feet long was applied on one side. An artist from New Jersey, Peter Freudenberg, painted sphere after studying the local fisheries for many hours. It has taken fifty gallons of paint in twenty colors. According to the official literature, the Peachoid boldly “set the record on what state is the largest fishery producer in the South. Contrary to popular belief, this is not Georgia.”

An illustration of a water tower. 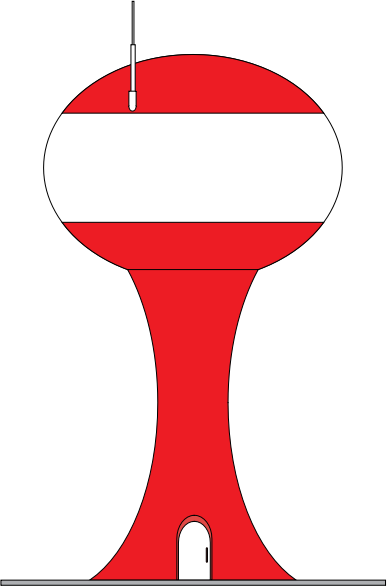 Earthoid water tank, Germantown, MD
33 years, Earthoid water tank is located on the Germantown campus of Montgomery College Germantown, Maryland. The globular large tank holds an impressive 100ft 2 million gallons and displays a very accurate, difficult to paint reproduction of our planet in all its oceanic, the glory infested by typhoon Peter Freudenberg. The reservoir of’ water Earthoid survived a close brush with’ municipal economy in early 2011 , when local authorities were asked to choose between restoring the fresco of Freudenberg or repainting the tank as a baseball. Fortunately, the common sense’ won and restoration is underway. “The Earthoid became a symbol for the community and Montgomery College,” said Commissioner Montgomery County Gene Counihan. “It is one of the most important monuments in the county of Montgomery.”

Fairfax, SD received a new water tower in 2015 a project to upgrade done by Tripp County Water District of’ user. So, with the old and the new !
Is great job they Demolition! (see the timelapse of the new building of the tower of’ water in my videos)

HOW DOES WATER TANK ?

It must be located higher than consumers, so the water is conducted to them via the distribution network through the pressure exerted, according to the principle of communicating vessels(1). Through pump, water is propelled upwardly into the bottom of the tank to fill. The water is then sent to a gravity system that will ensure its delivery to all homes.

This system is used for water supply in 90 % New York buildings of more than 6 floors.

(1) On earth, Water knows down under the influence of its own weight. It can also keep the same height as that given to it in the original, For example, in this pipe. On the other hand, it can not rise above its original level without a helping hand. this help, it is the pumping system that will provide it.

Water tower on a New York rooftop, water tanks provide good pressure in the apartments. They can be used as a water reserve in case of fire because the law requires 2 separate water sources for a building.

An estimated 15.000 water tanks on the roofs of New York distributed in the five boroughs.

And here's a water tank 1 million gallons to clean !

Because the infrastructure will, water towers are quite picturesque. Some people turn houses once the city not need them. Pop Chart Lab designers have created a visual ode to New York City water tower taxonomy . But why exactly do we need to store our water hundreds of feet- over the city ?

Most water towers are fairly simple machines . L’ clean water, is pumped through the tower, where it is stored in a large tank could hold a million or more gallons enough’ water to run this particular city for a day. When the region needs’ water, water pumps use the force of gravity to provide high water pressure. Because they work with gravity, they must be larger than the buildings they provide the’ water in order to reach the upper floors. Each additional foot of height in a tower of water increases the pressure of’ water .43 PSI.

Here is a basic outline of what a water tower system looks like :
keep the’ high soil water plays another important role in the infrastructure of the city. It allows low use of water pumps regions . Generally, water demand of a city varies throughout the day. Many people take showers before work and’ school, but fewer people are being’ execution plenty of water 3 hours without a water tower, the municipality should buy a large water pump and powerful enough to meet the peak demand in the morning , which would largely be lost during slow parts of the day for’ use of’ water (more incur additional expenses). Instead of that, municipalities can buy a pump just large enough to meet demand on average water in the area for the day, and that the power of the water tower take over for the time with the demand that exceeds the pump capacity. When the request of’ water drops at night, the pump may replace water in the tower. In addition , if the power is off and the city's water pumps fail, the tower of’ Water can keep the’ running water gently for at least 24 hours.

Out of curiosity ! Go inside a water tower in Edmond, Oklahoma !