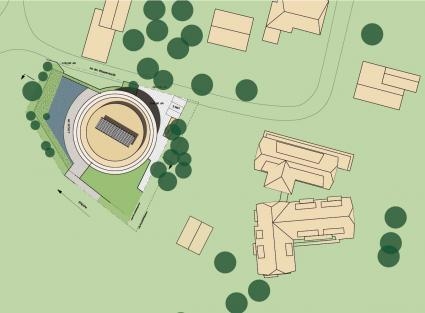 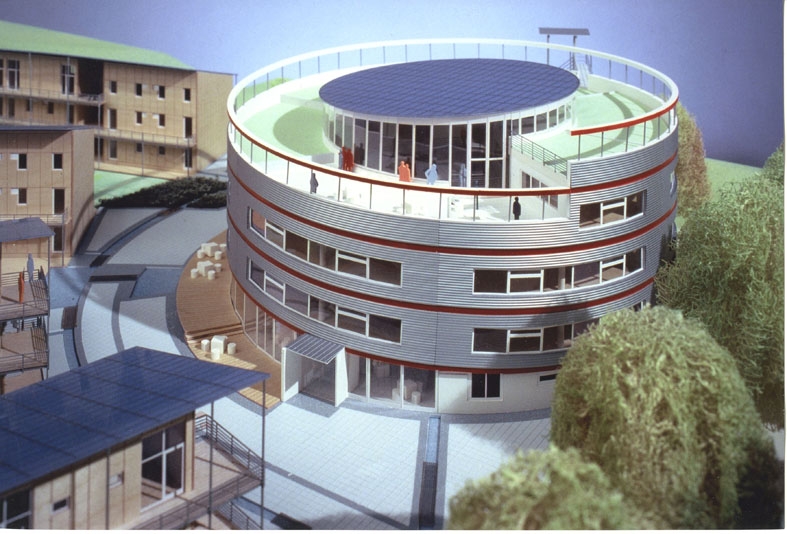 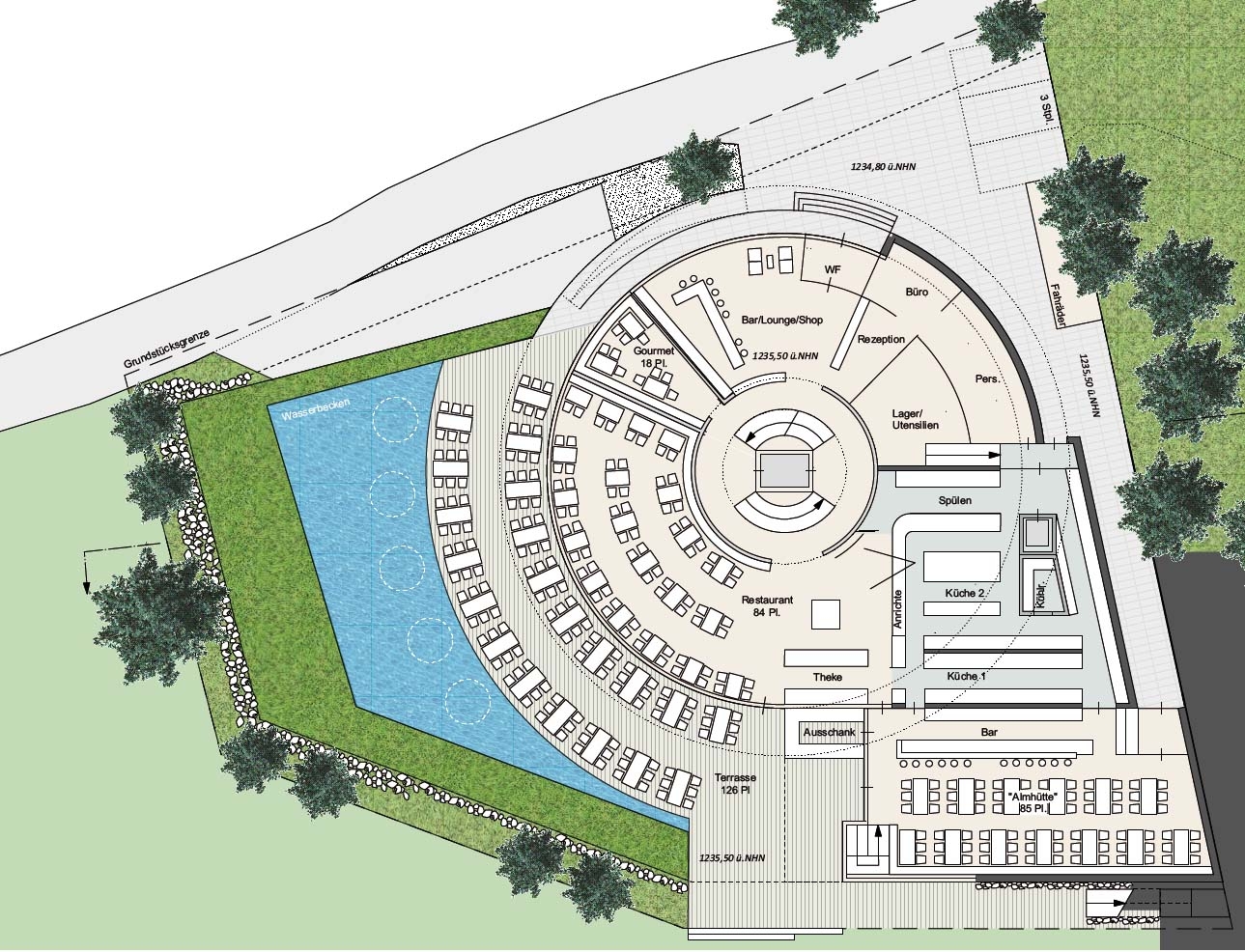 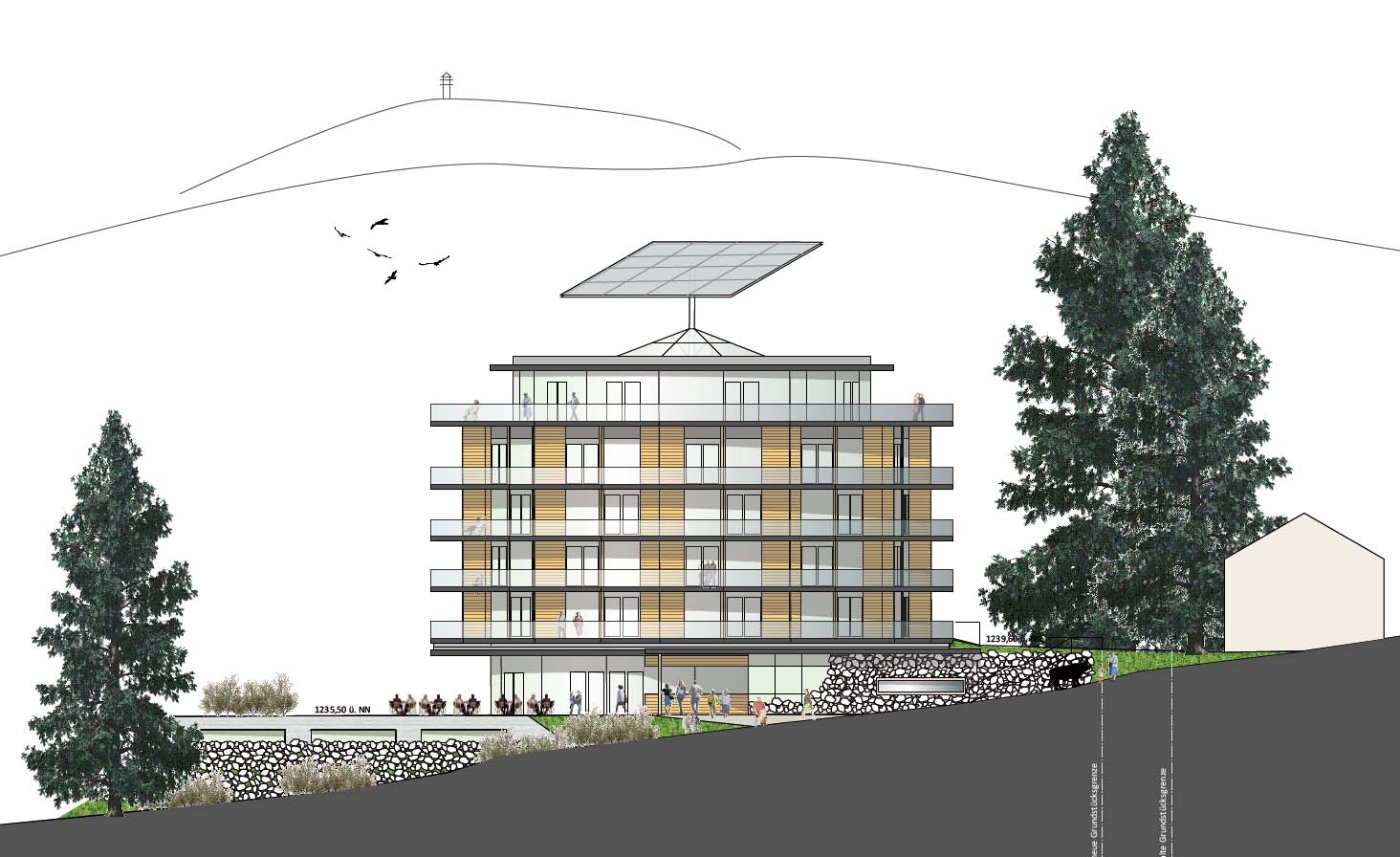 south elevation // In the midst of winter sports and recreation on the mountain "Feldberg" in the Black Forest, Hotel Heliotrope will be built. The cylinder-shaped building has four floors, the upper three floors and loft with the wellness rotatably space. In the center of the hotel building is the circular lobby, with the central access portion that leads to all floors. The elevator, stairs and the bearings form a structural unit which descends to the basement. The reception and restaurants are on the ground floor. Right here, we also find a special restaurant for skiers and hikers with a large terrace facing south and south-west overlooking the ski slope nearby. There is also a hotel lounge with a bar, a second restaurant for hotel guests and a third high quality gourmet restaurant.

Floor Plan // Each of the three upper floors are nine apartments and a larger suite. All rooms with large windows from floor to ceiling and balcony in front of them have spectacular views - or rather, in a central building, they have new views and changing perspectives. A special attraction is the rooftop garden (at 1250 meters). From the apartments, the view from the rooftop terrace joins the enchanting landscape of the Black Forest, to the mountains "Feldberg" and "Belchen". Right here, you will find the spa area with a large roof garden. Outside, there is a Jacuzzi, inside a sauna, a relaxation room and fitness. In addition, cooking school is housed here. The building is crowned by a large photovoltaic system, following the sun regardless of the building, and casts shadows on the outdoor terrace in summer.

Section // In the basement there is an underground garage with 30 parking spaces, toilets and storage space for restaurants and hotel rooms as well as technical and auxiliary and ski lockers. Access is by road "An der Wiesenquelle" The slope of the street allows entries to the ground floor in both underground parking and access to the hotel, the result is an extraordinary building in spectacular scenery restaurants and hotels.

Rolf Disch (1944) born in Freiburg im Breisgau, is a German architect whose work focuses on green building and solar architecture Disch has participated in the development of Vauban (ecological district of Freiburg) and it is also known for Heliotrop, its rotating passive house. 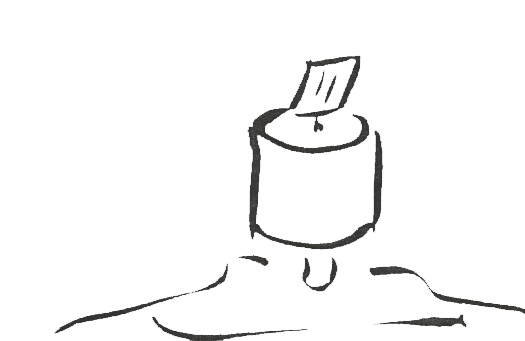 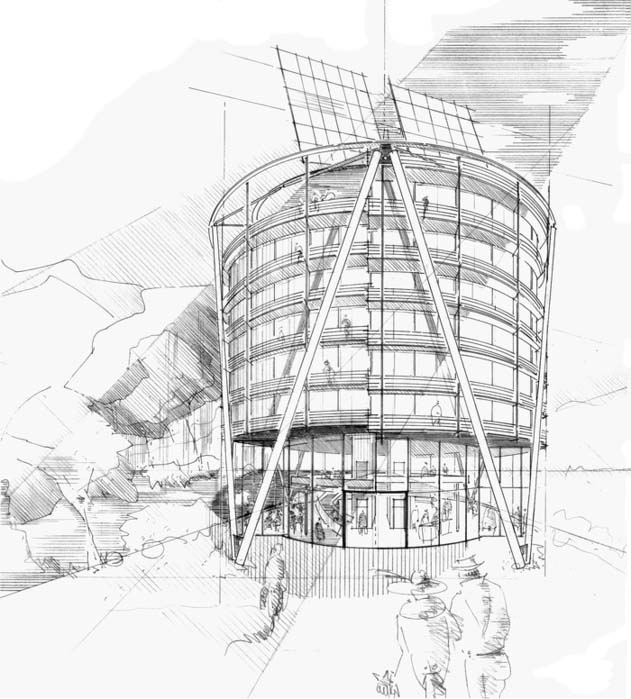 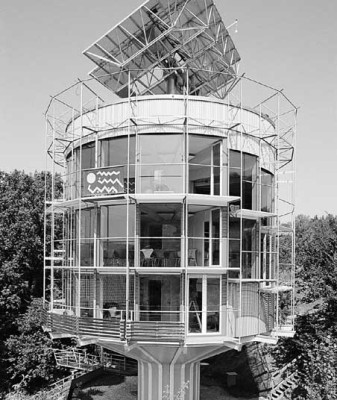 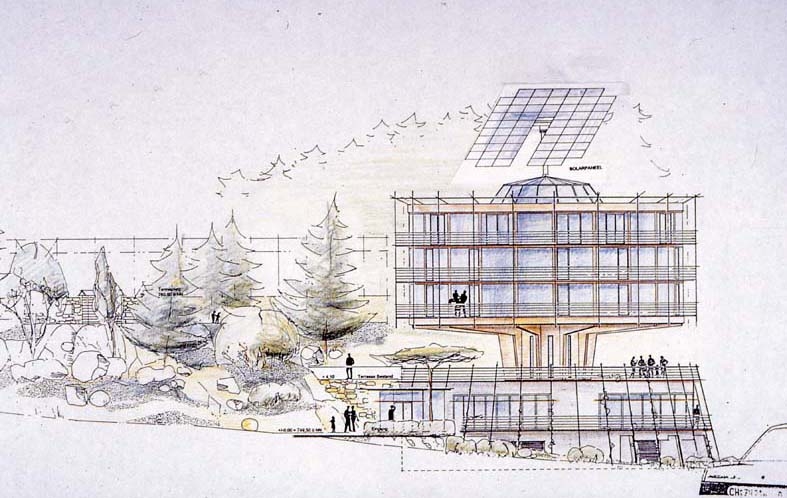 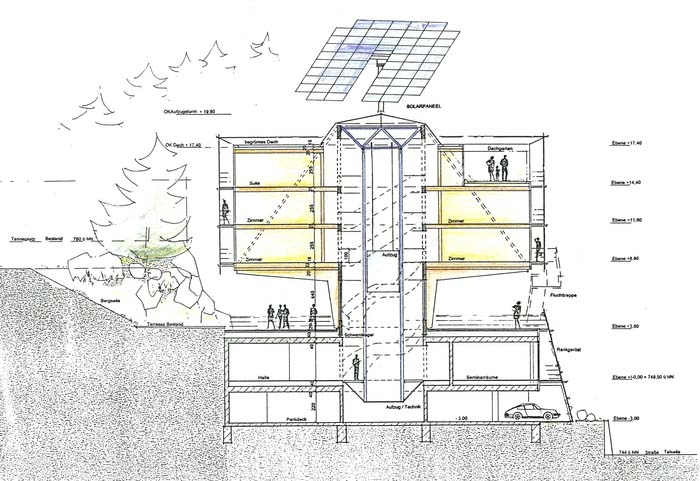 “Heliotrope is a residential building and innovative office, which has the shape of a shaft with a cylindrical crown. It is glazed on a closed side of the other side. almost like a sunflower turns to the sun, as a motor and a rotating mechanism do its glossy side of the sun if necessary. The remainder of the outer skin is highly thermally insulated, helping to minimize heat loss in winter Zion Miss Trans. This allows optimal performance of the solar energy. 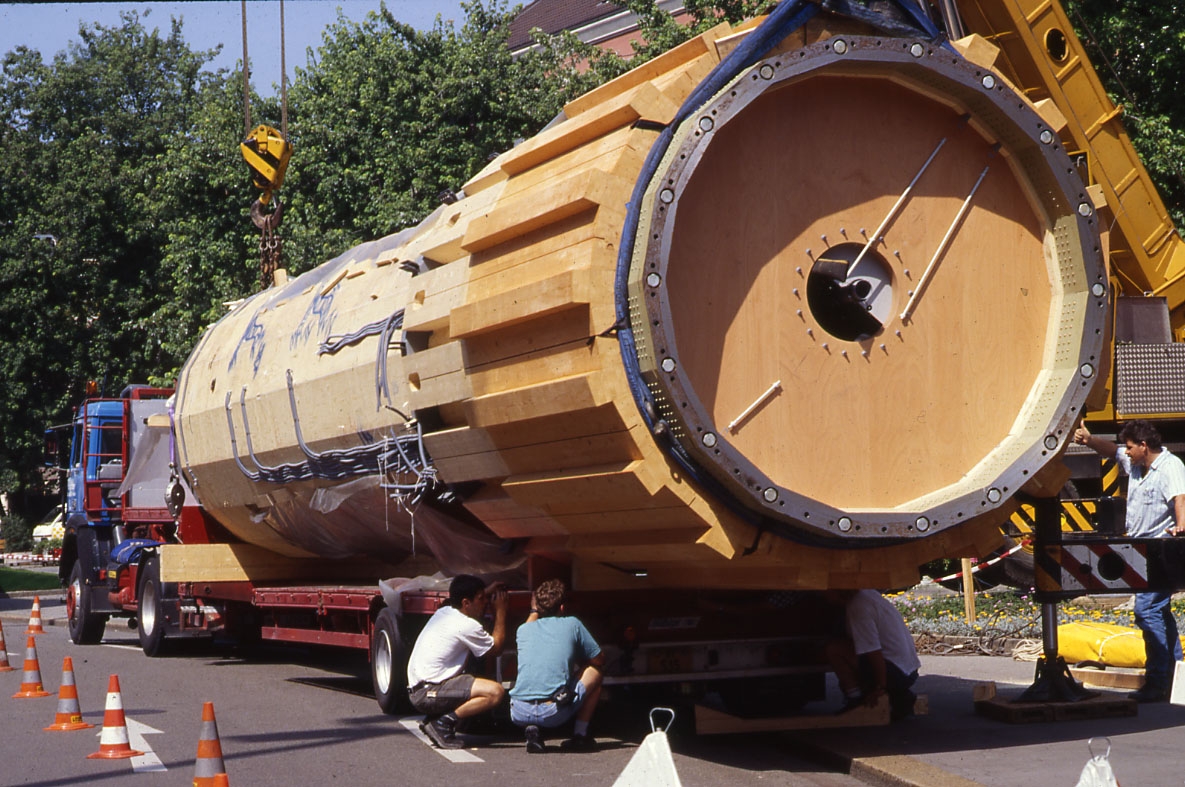 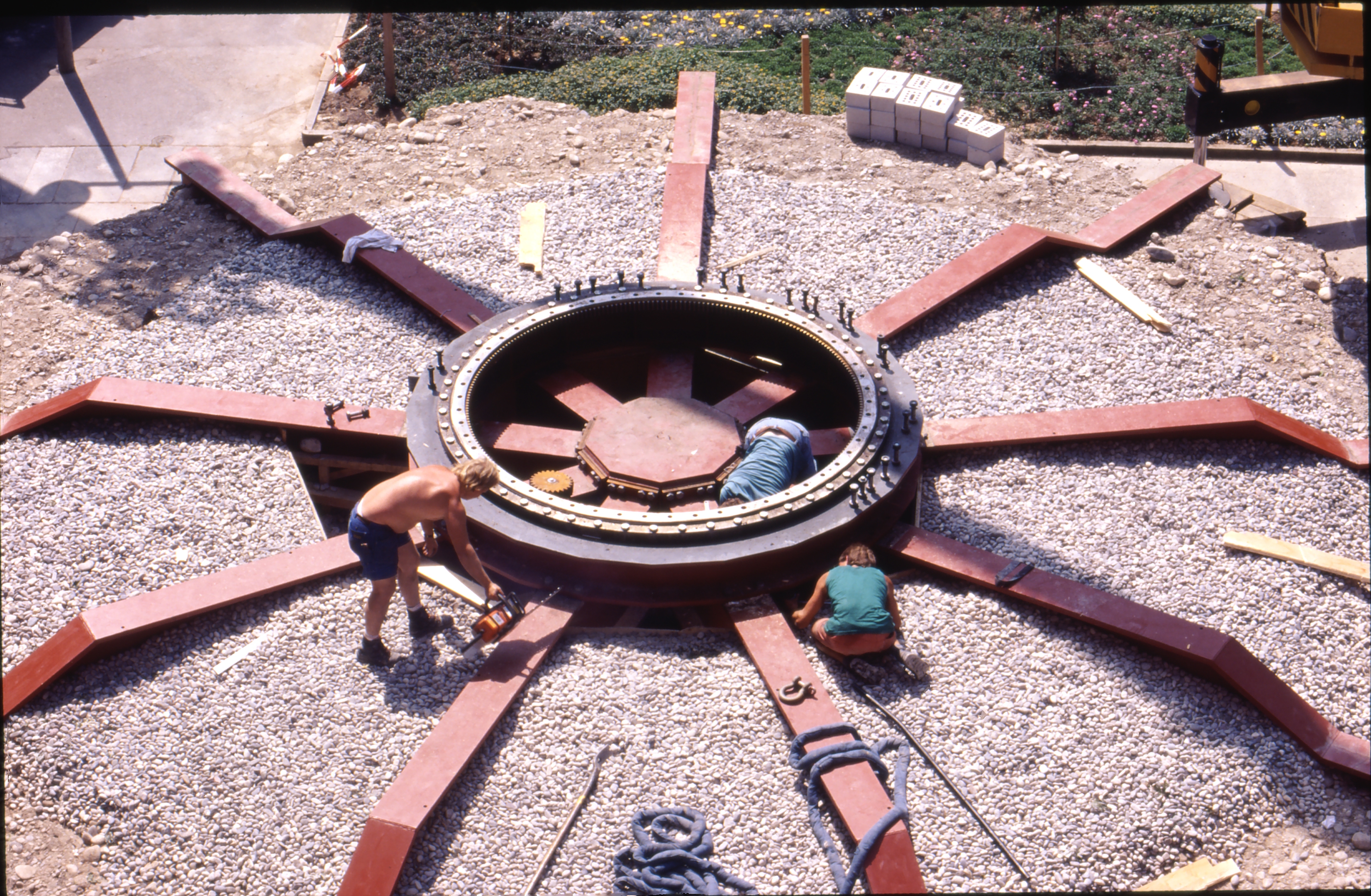 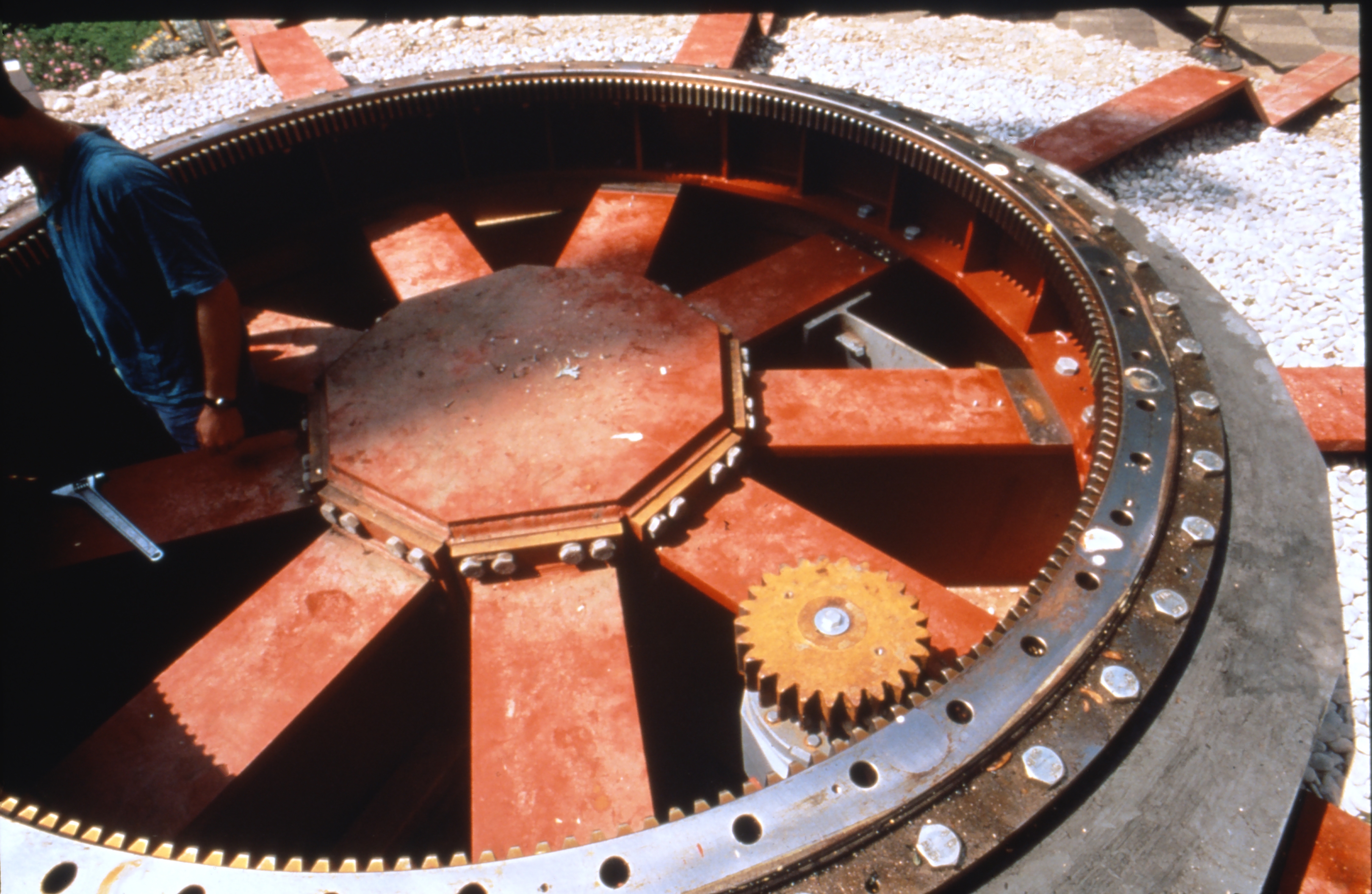 The building consists of three main parts: At the bottom is anchored in the reinforced concrete base where the technical equipment for the mechanical and energy storage are housed. Leaves, the vertical tube connecting laminated, which serves to turn the axis of rotation of the segmental floor levels of "Treehouse" starts. It connects the underground technical area with the work plans and the roof terrace. The floors are made of a wooden frame and are fixed to the central axis. Basically, all the vertical risers bundle distribution of heat in the media of the house.

The cylindrical core functions in turn as a pin, around which the steps for the development of residential and office space. Individual space segments screw with a height difference of 90 centimeters spirally around the center upwards and forms, as it, a second, Spiral staircase external, a three-dimensional space continuum. Each room is accessed directly from the stair tower. The Treehouse is preceded by a cylindrical panoramic balcony, who – like segments themselves – at stages increases.

The upper level is reserved for electricity. For it, a photovoltaic system was installed on the roof terrace, which also track the sun. This provides more power than the building can consume the same period.

The excess electricity is injected into the network. In Heliotrop find modern house technology for applications d & rsquo; insulation and heat recovery. Built with green materials constantly, the building will be a model for a rational and prudent use of natural resources. Because of its symbolism, Heliotrope has a high recognition value, making it an international symbol of a solar architecture peak. “ 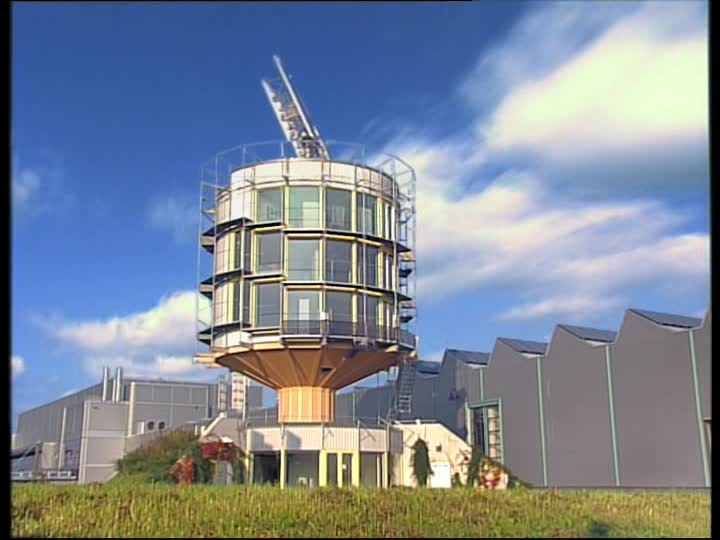 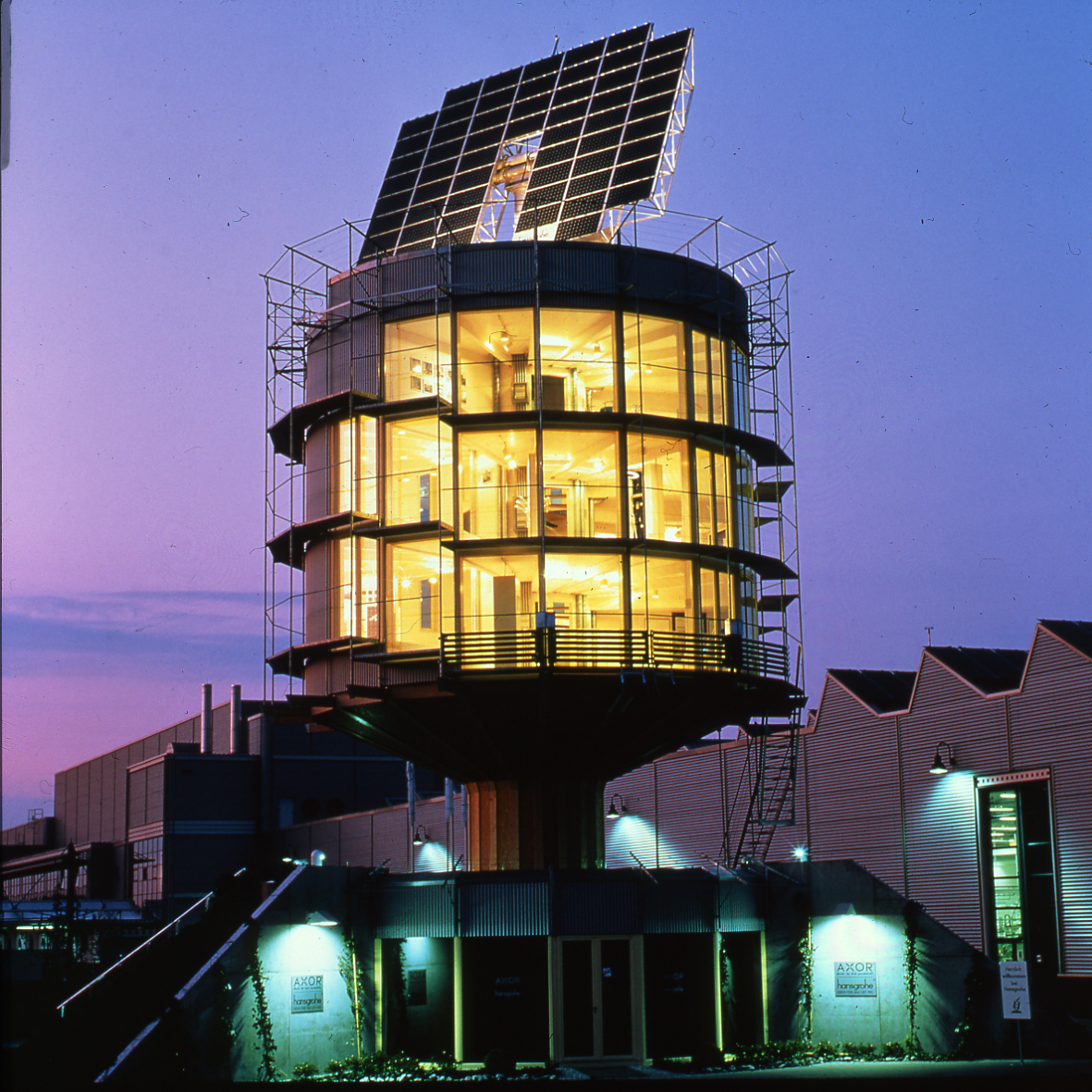 The question is- which is Heliotrop ? The answer is quite simple; It is a solar house that is able to turn and led to rising Sonnenschiff solar development and the German solar industry in that it is today. This amazing house was designed and developed by architect Ralph Disch in 1994. It is able to generate five times the energy it consumes. The magic happens in his ability to turn so as to face the sun, despite the sun's position in the sky. It is also based on using the triple glazed thermal glass windows along a large solar panel which is mounted on the roof and a few solar tubes. Heliotrop is known as the & rsquo; one of the first truly zero d & rsquo homes; World Energy.

The building was named after a biological process that is called heliotropism which is used by plants in the Arctic to capture the maximum amount of light during the growing season is much shorter than anywhere else. Heliotrope, however, also includes a biological process more known paraheliotropism that allows plants to turn away to avoid direct sunlight. The Heliotrope does this by using its side that is thermally insulated side wood instead of glass and can provide shade when necessary.

Solar time 6,6 kilowatts which is mounted on top of Heliotrope can generate enough energy to maintain the net energy of the positive structure. A handrail system has also been integrated on the roof and double as solar thermal tube providing heat and hot water. Greywater and rainwater is collected and reused. The house also features a toilet composting system. The interest in Ralph Disch Solar began there about 25 when he fought to prevent the construction of a nuclear power plant is going near the hometown of Freiburg, in Germany. He is now running his own architecture firm, Rolf Disch Solar Architecture and is known as a solar pioneer in retail, residential and commercial designs.

Further energy is the name given to the concept of buildings being able to generate more power they consume and Disch developed this while building Heliotrope. Disch lives in the prototype itself, while two others were built as, each costing of 2 millions $, and located in Offenburg and Hilpolstein. The entire structure rotates around a central pole which is about 14 meters high and has a central staircase and electrical installation. It was built modularly and can be compared to the "house of the rotating shaft idea.

Is a rotating solar house by architect Rolf Disch, built in 1994 in Freiburg im Breisgau, Germany. positive energy balance. She used to produce what is necessary for its own energy consumption :
dual axis photovoltaic tracking system
a geothermal heat exchange system
a cogeneration system used to heat buildings and generate electricity
an internal composting system, for organic waste. 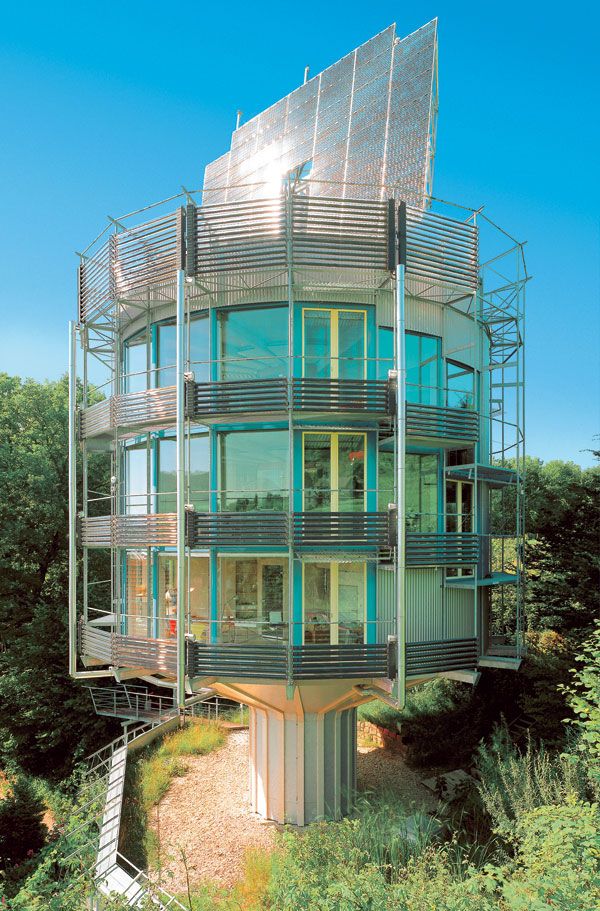 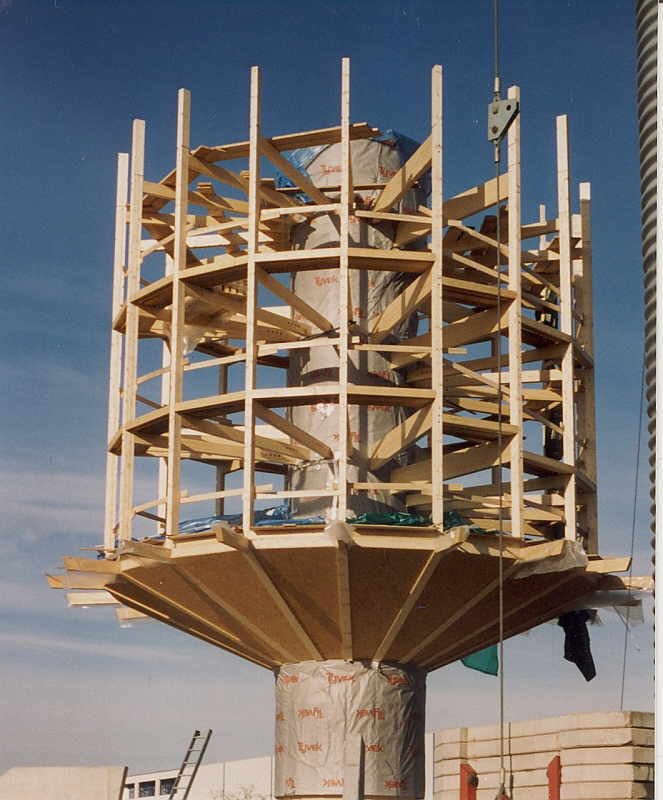 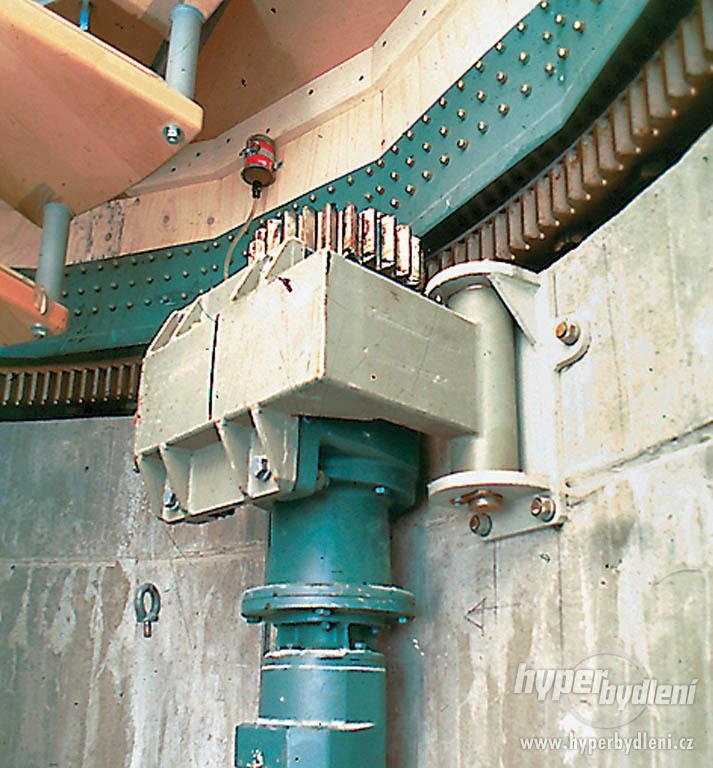 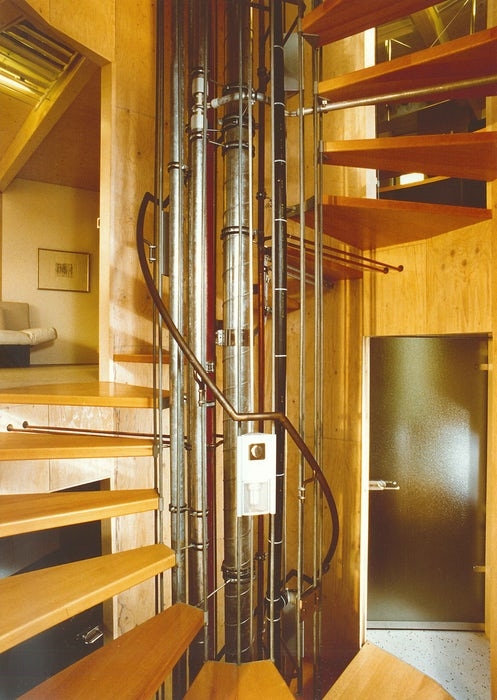 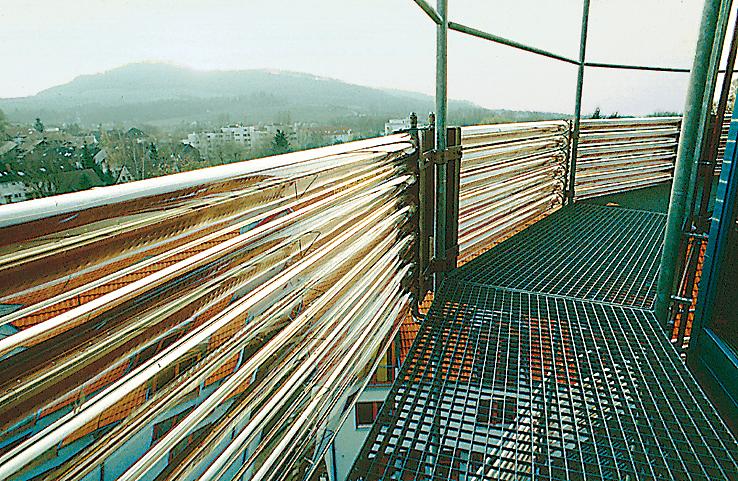 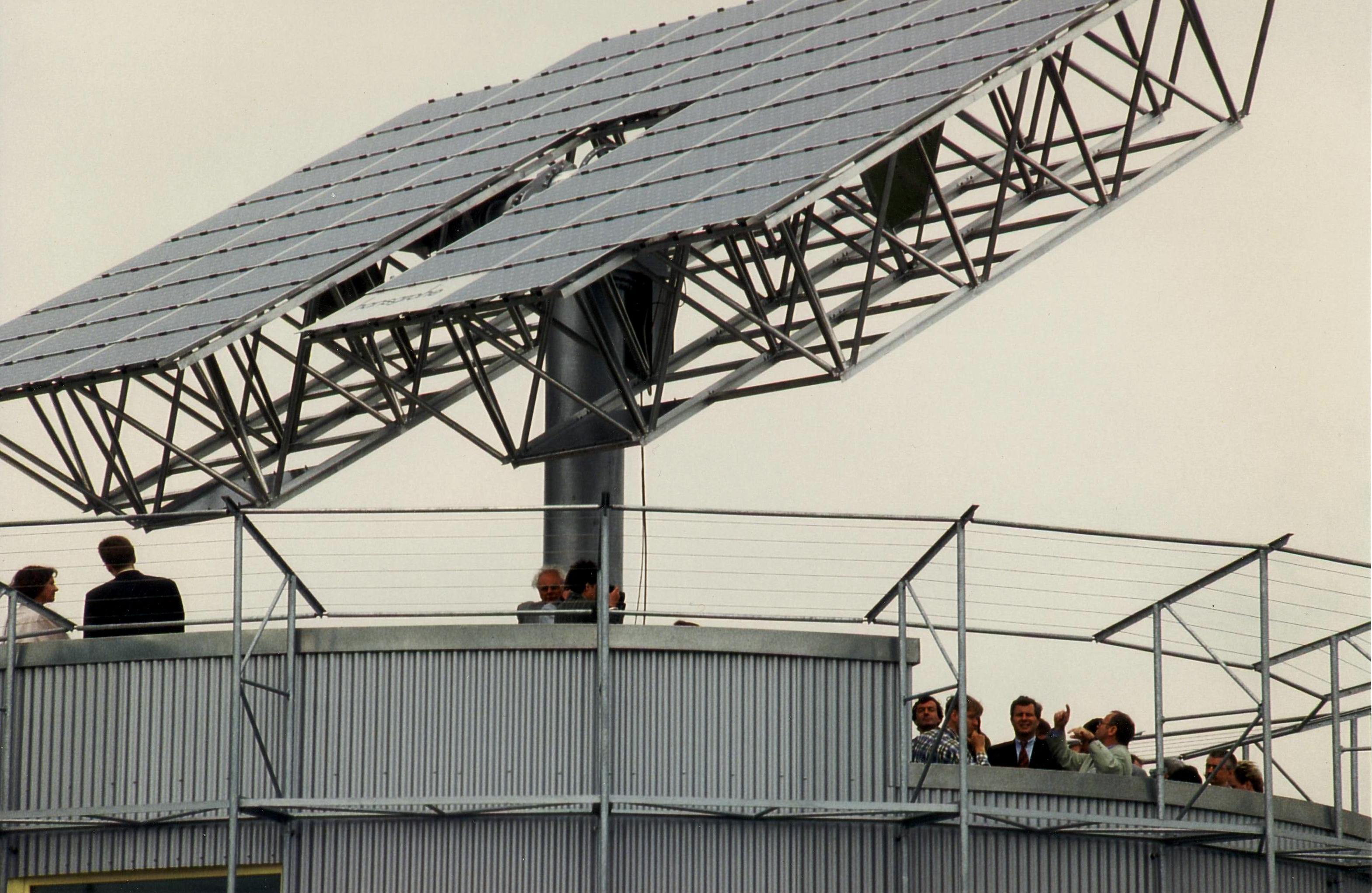 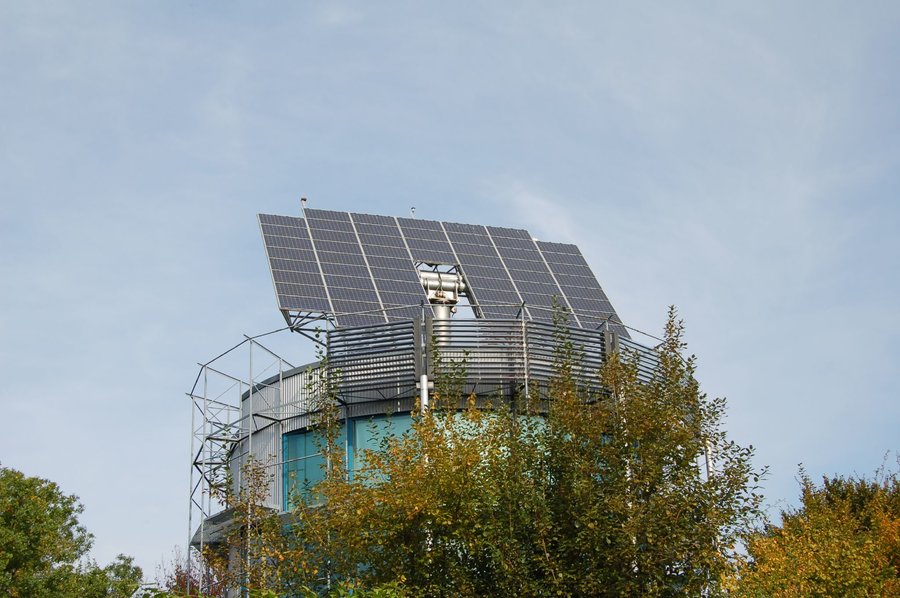 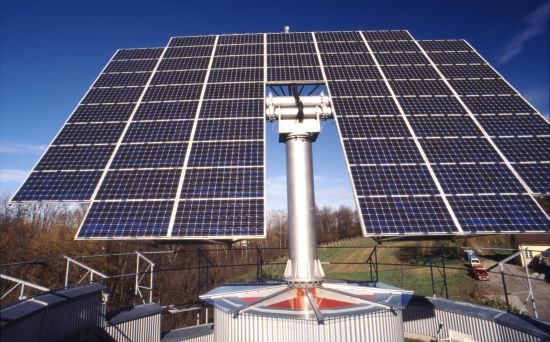 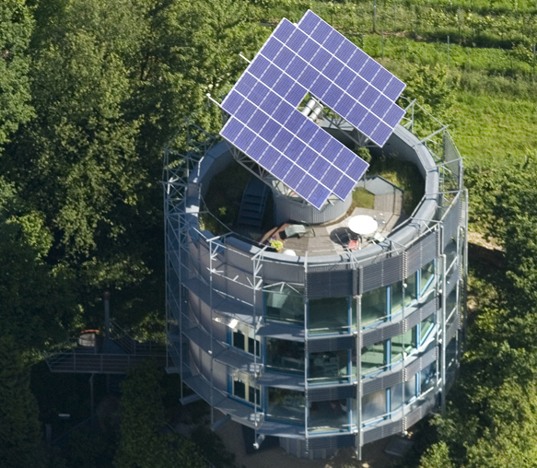 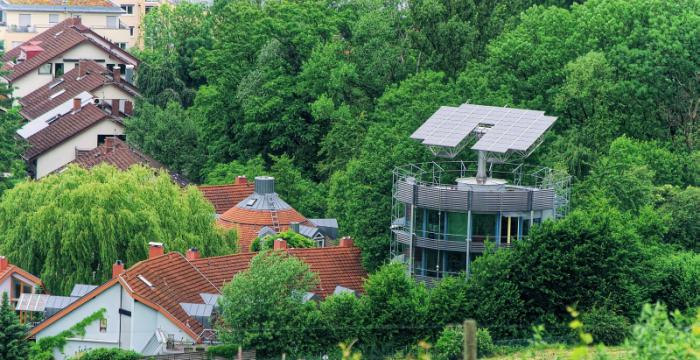 It's in 1994 the architect Rolf Dish planted in his city of Freiburg in Germany, a seed that since, continues to grow. At the time Germany is shared, because trying to decide if she will give up or not nuclear energy . Rolf Dish does not believe in nuclear, and does not want to plant in his city. He said while he has to do something to show his countrymen that another way is possible.
Rotation, it takes full advantage of the sun, allowing daylight in if its triple-glazed windows and energize its large solar panel mounted on the roof and solar thermal tubes. The result is one of the first modern zero-energy houses in the world – generate five times the energy it uses.

Thus he develops his personal residence : l’héliotrope (etymologically : "Following the sun"), that was just the first positive energy house. Better than that, because the ratios of the house "more energy" - batie ago 15 years - show that it produces 5 times more energy than it consumes.

The somewhat unusual villa, takes advantage of the sun following its course 365 days a year. The 6,6 Kwh solar panels on the roof than sufficient to supply it with energy. But beyond lean production, Heliotrope foremost advocates rational consumption. Equipped with triple glazing, a solar water heating system through the front pipes, recovery of rainwater, dry toilets ... the list of equipment for the rational consumption without charge comfort is long. Finally, since 15 years, architect resells the surplus to its common network.

Certainly, the design of the house is a bit too particular have developed, However, on the principles, Rolf Dish was really the precursor of any facilities that are emerging only now. His project Heliotrope then allowed him to duplicate his experience on a whole neighborhood : that of Sonnenschiff, also produces 4 times more energy than it consumes…

If only every city had its Rolf Dish ... 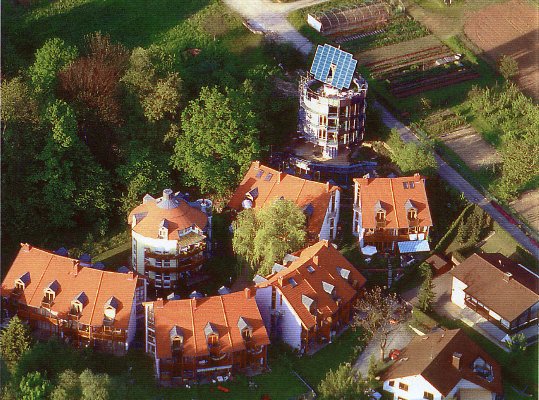 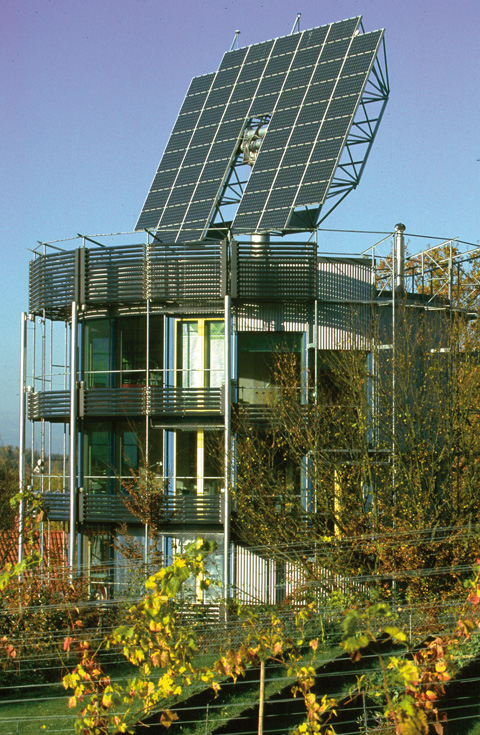 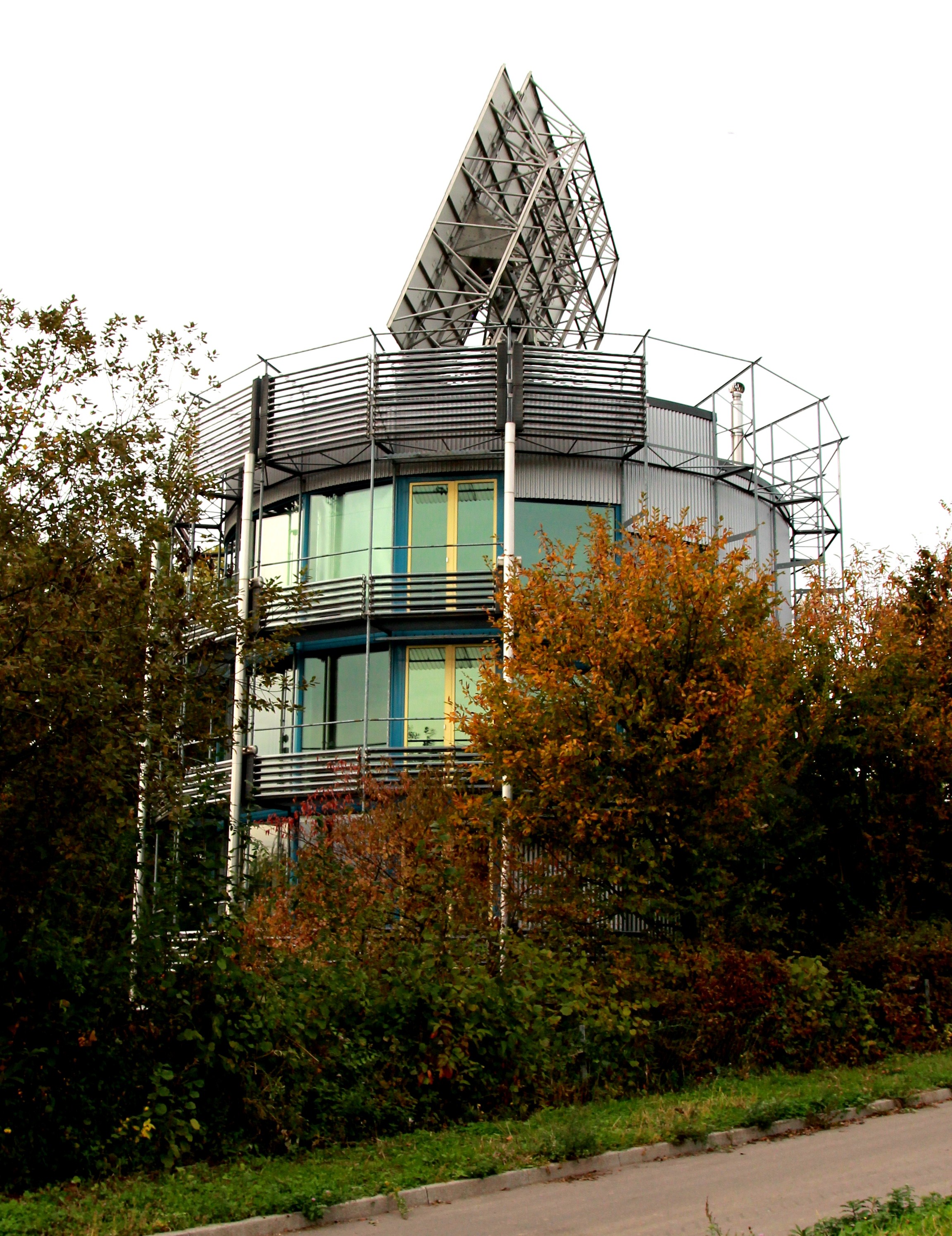 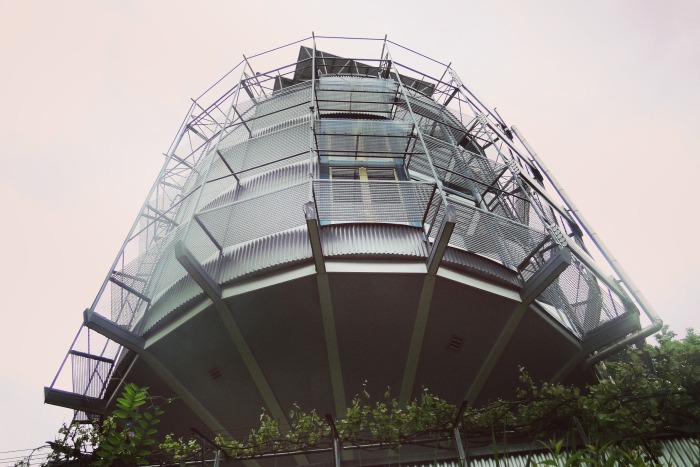 16-02- 2016
Héliotrope (https://enerfip.fr/projets/heliotrope) is a solar power project using a system of monitoring the movement of the sun to maximize energy production.
Heliotrope's goal is to produce clean, renewable energy that will be injected into the local network and consumed, inter alia, by neighboring villagers. By using tracking system of the sun's path (Heliotrope in French and in English Trackers), the production of the plant will be more efficient than a conventional fixed PV plant.
in parallel, this citizen crowdfunding allows Altergie Development to improve its regional roots in Provence where it already operates a plant. It also allows him to consider the achievement of other photovoltaic projects.