The story of the Suleica

In 1958, Ferdinand Schäfer is interested in the idea of ​​making polyester caravans. 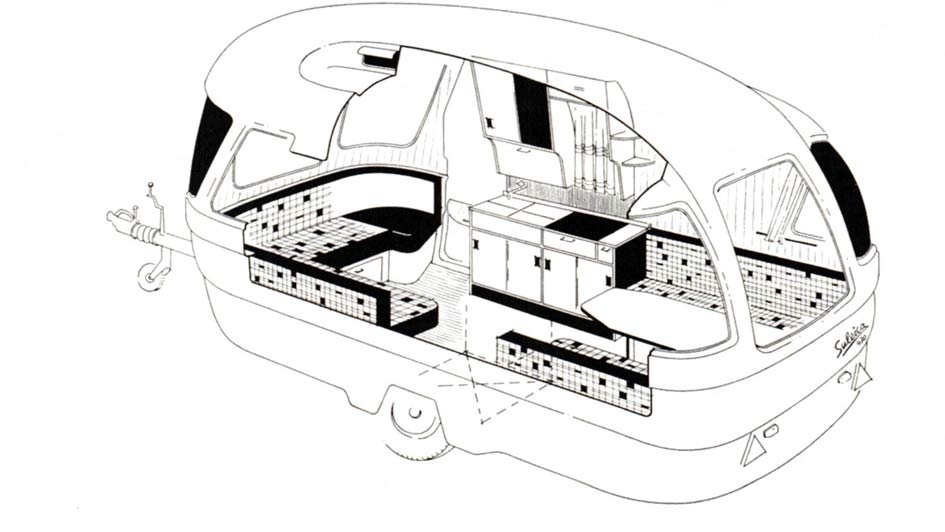 Today, This Dutch company still exists and continues to build plastic caravans as the Biod .

Schäfer described the benefits of building its Suleica as follows: Due to the sensitive design with materials and a special support profile, the entire housing is bolted to the chassis without unsupported and without stiffening the interior construction with only 6 bolts.

Whether 4,30 m long, 2 m plus large, a comfortably equipped caravan with a slight height 2,05 m, weighs only 580 kg, was not there. The prototype I is measured and weighed, however, lighter series about 20 kg lighter. 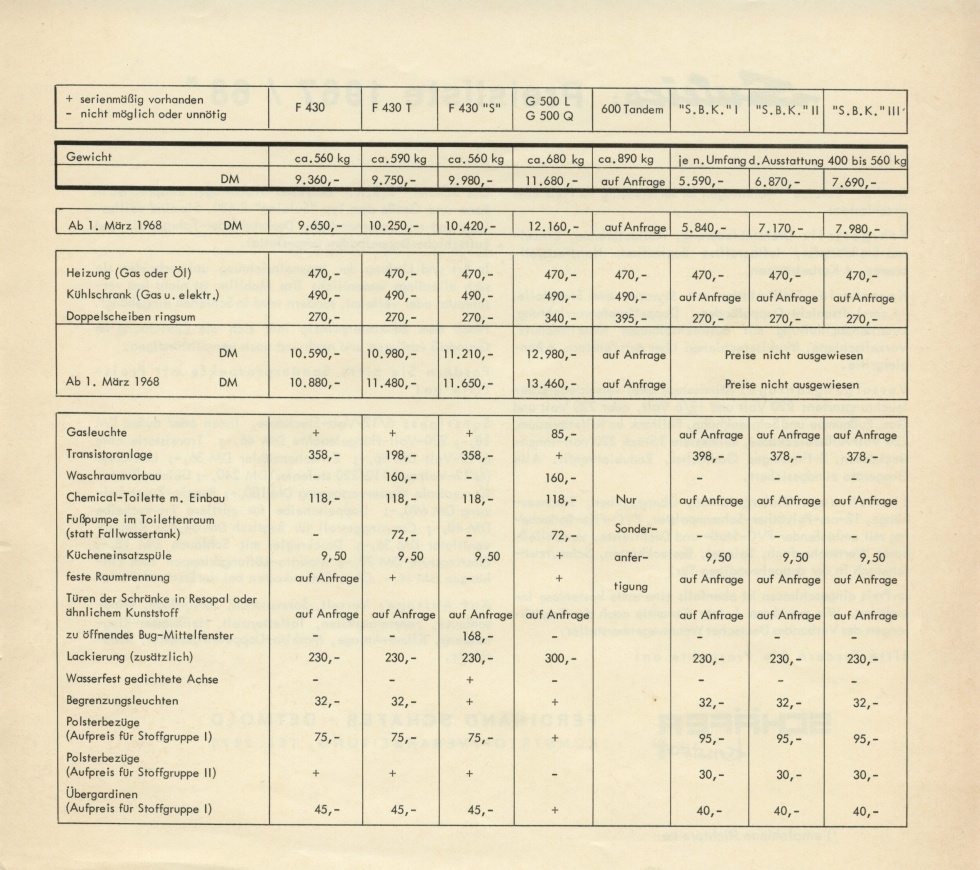 As can be seen from the above design sketches, there are important actually built models. So, the door of one room was not left as shown in the sketch, but on the right hinged, which led to many 430 s due to the application of force to complications. The door should first be made in two parts, closed watertight by rubber profiles on the vehicle. The windows are missing very narrow frame and wheel arches in the drawings. 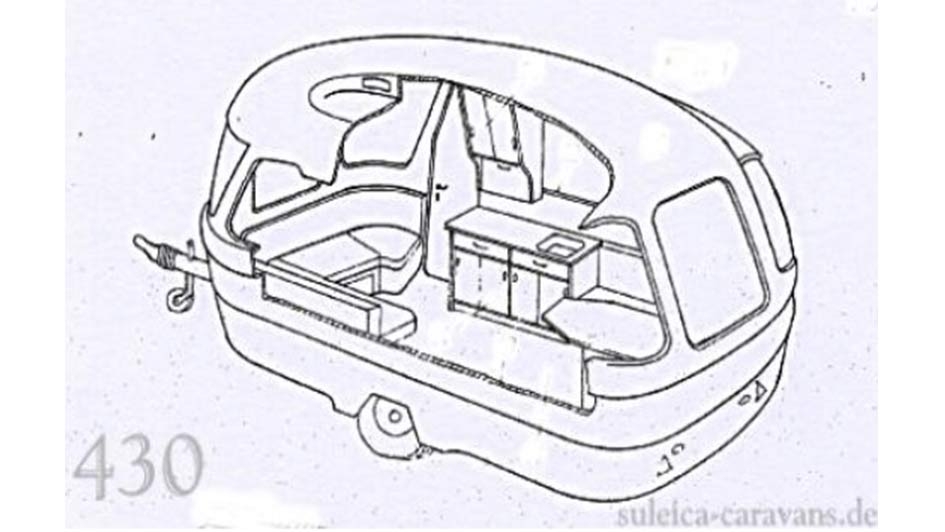 Extract from the application of utility model 1961:
The body is suitably stiffened by belt-shaped reinforcing elements arranged at approximately mid-height; Furthermore, it can be strengthened by a stepped configuration in the longitudinal direction. In addition, the cover can be enhanced by a contrast of the roof sides, for example, extending at right angles to a roof rib reinforcing rib. The belt reinforcement extends at mid-height in the horizontal plane around the entire caravan. At the forefront, This building is a little lower and saved to provide a relatively distant direct window now. The lower area of ​​the caravan is designed gradually and thus obtain a useful additional stability.

In the utility model applications 1961 and 1962, use as a personal watercraft is always treated, in which case the vehicle axle, which is advantageously outside the tub or the like, is designed to be waterproof. Since the case has a certain depth as watercraft, it is particularly advantageous to form the gate of the two ways of housing, so that the lower part can be locked with water. For this purpose, it may be appropriate to provide the door rubber gaskets or similar. The upper part of the door can then be opened or closed independently of the lower part of the door .

The first prototype was produced in 1961. In 1962, mass production of Suleica 430 a ddebunked. The prototype still differed in details later production model and had eg other taillights and a visible overhang at the front. In production plants, everything was made on the one hand. At the beginning was a form with which Suleica could be stratified.

After Suleica was laminated with GRP / polyester using the original mold, we could admire the first Suleica shell. 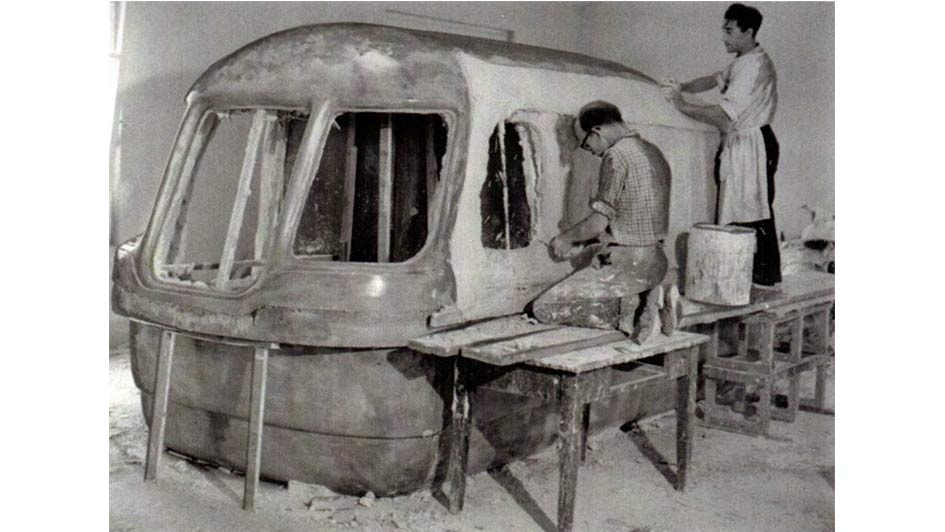 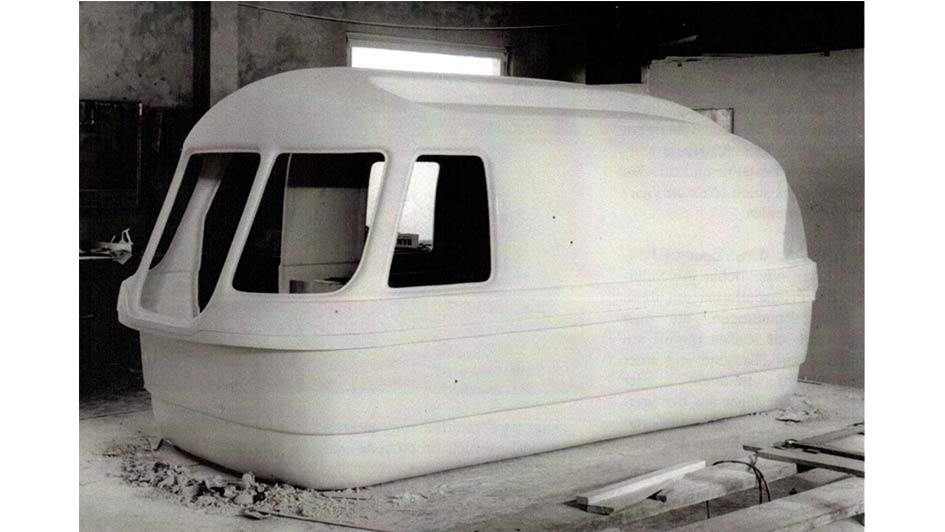 Thereafter, much manual labor was invested Suleica to take him to the road. We had to work on external values, but also on inner values.

outside: the wings to be installed later. Openings for lantern windows were sawn. Joints, the Windows (Plexiglas double glazing) and lighting should be installed. As a frame, almost all Suleica chassis were built by the company Hahn. The frame had a torsion bar and an overrun brake. The first Suleica got 800kg axles, later also of the factory were also installed 1000kg and 1200kg axles.

Inside: coverage was insulated with styrofoam, on which the breathable brokerage felt was glued as panel. The furniture was mostly thin plywood. The sink and stove were standard equipment, a refrigerator and a gas heater, however, were special accessories.

In 1961 the first prototype ready to ride was finished in 1962, serial production was launched ! 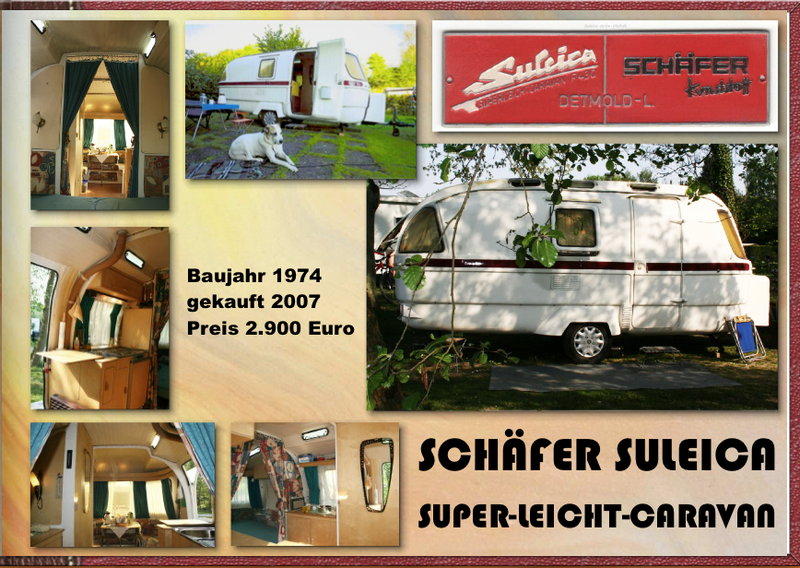 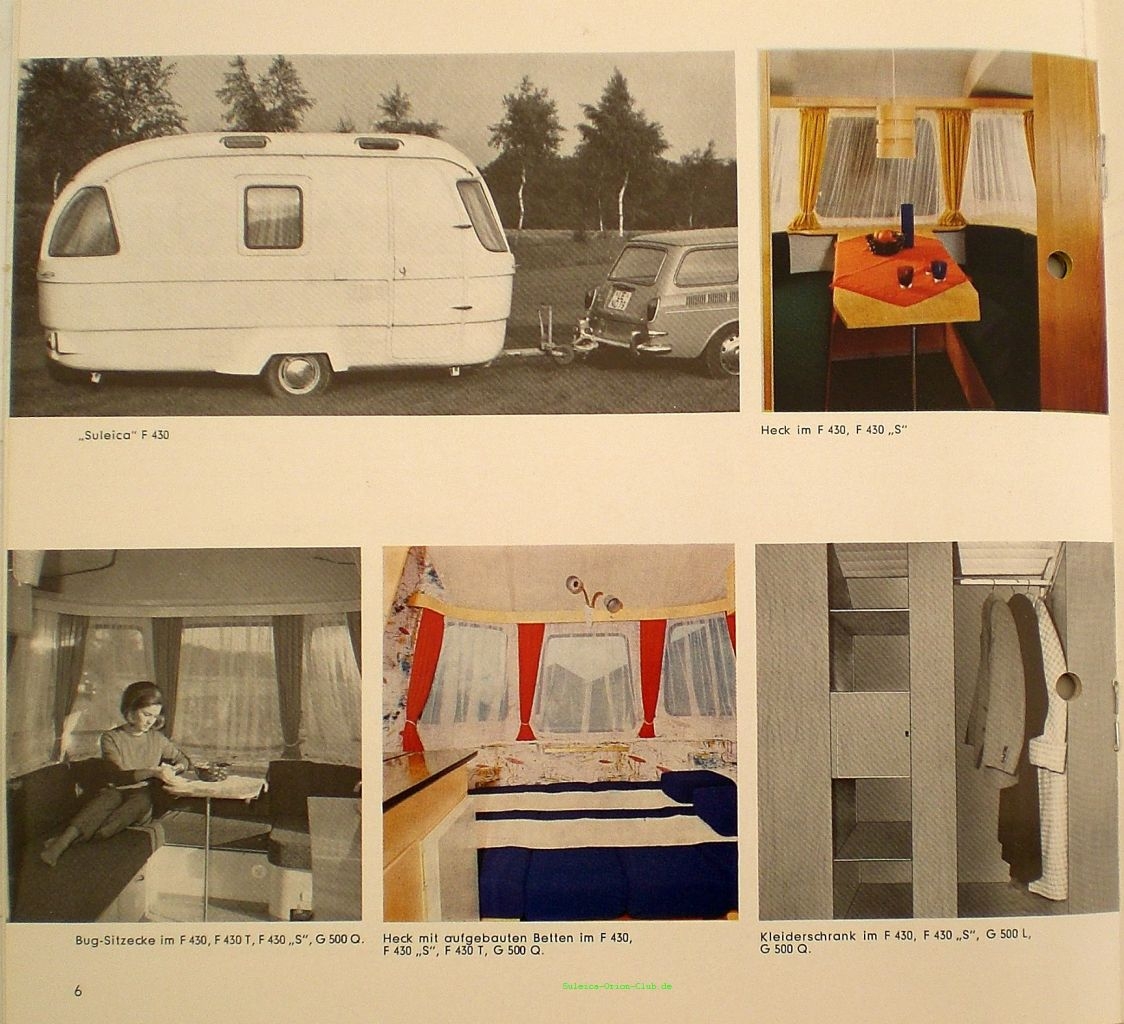 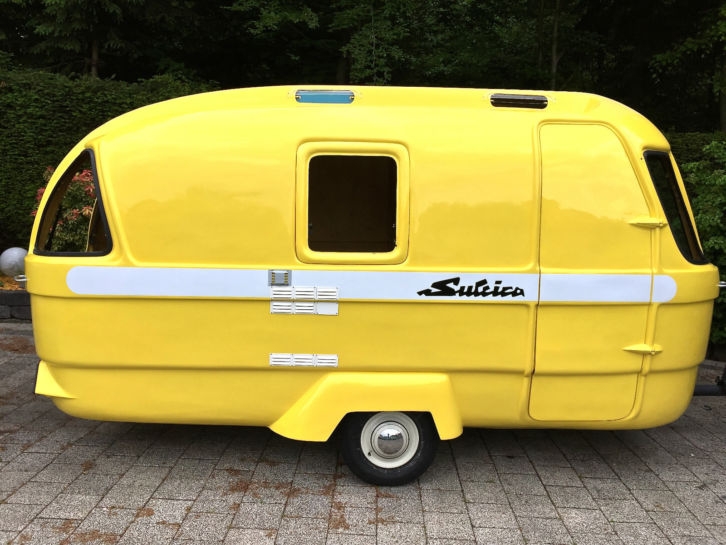 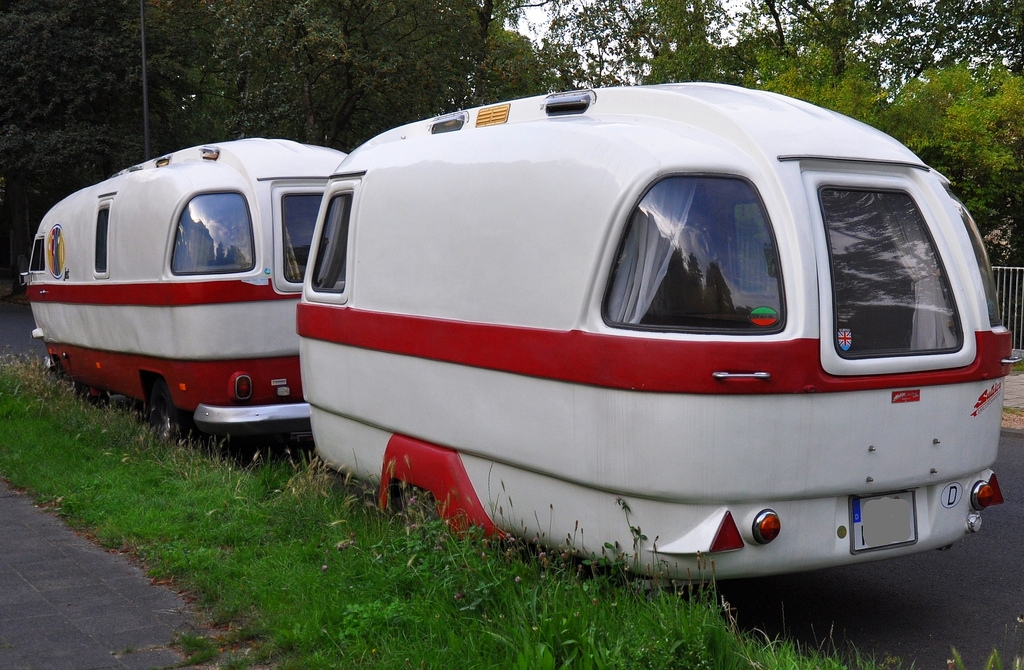 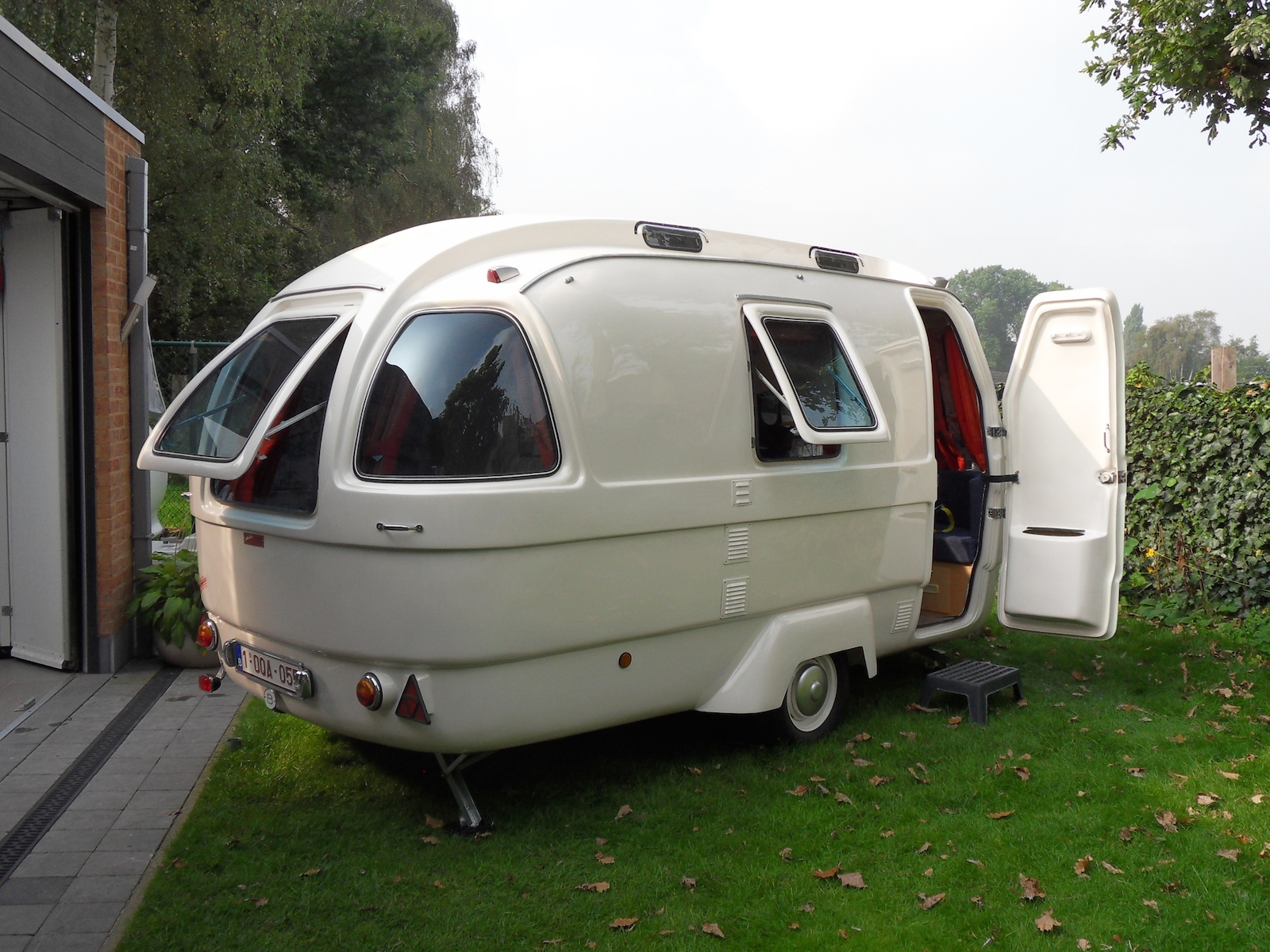 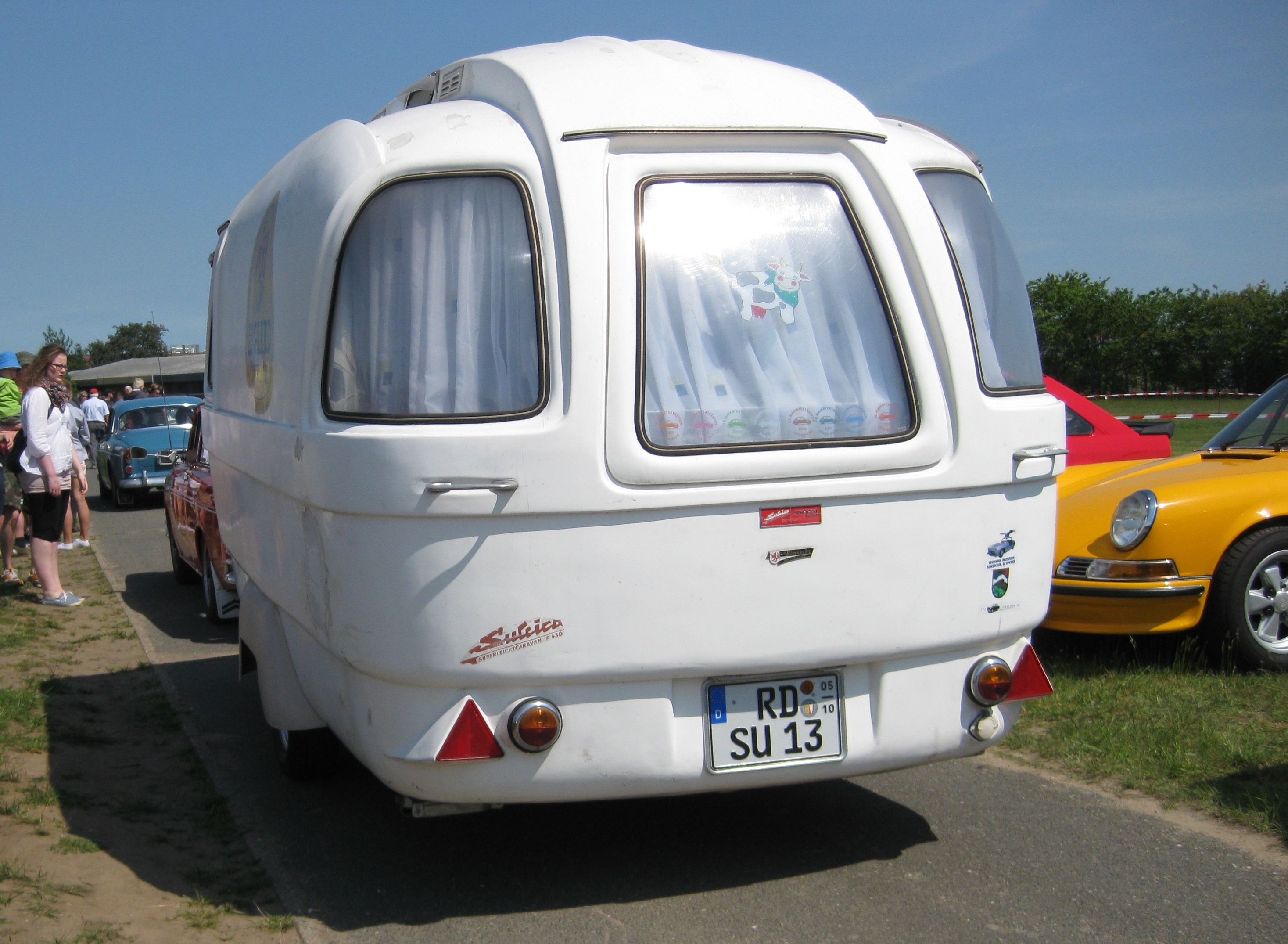 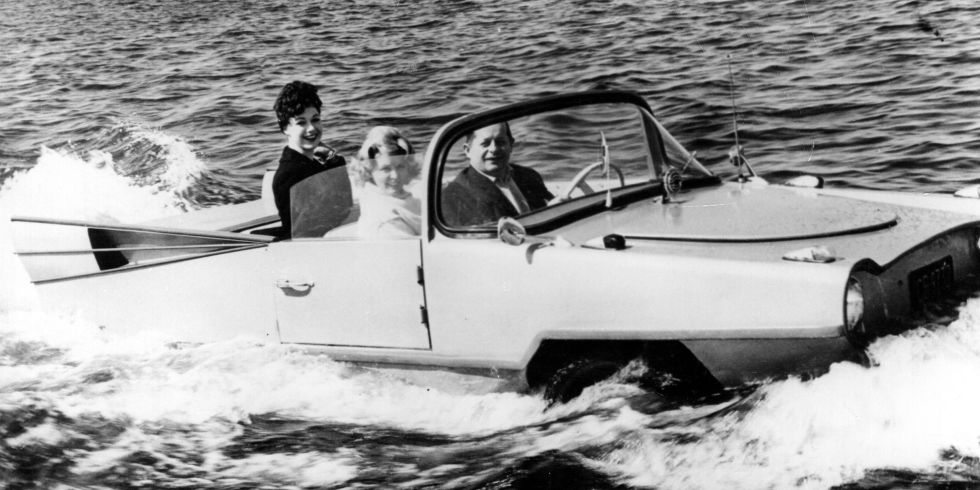 Video of the mini Amphicar but why not ?

with approximately 3 878 Products in Germany 1961 at 1968, Amphicar is the only amphibious automobile ever produced in series for everyday use. Available in four colors (Beach White, Regatta Red, Lagoon Blue et Fjord Green), about 3 046 Amphicars were imported to the United States over the years 1960. called the “model 770”, Amphicar has a maximum speed of 7 mph on water and 70 mph field (hence the name). The double helix thread of nylon and a special transmission both parties allow the use of wheels and the car's propellers, independently or simultaneously. Gaskets in robust rubber ensure that there is no infiltration of water into the passenger area. In 1965, two Amphicars sailed successfully in the Yukon River in Alaska and two others crossed the Channel 1968 – against strong waves 20 feet and strong winds. Finally, the mode of transport peerless found a place on the big screen, with Amphicars appearing in popular films like Rotten to the Core (1965) et The President’s Analyst (1967). Nowadays, it is rare to meet a Amphatèque. In fact, the only place the general public can experience riding in an Amphicar is at THE BOATHOUSE in Disney Springs , Disney World.

It would say a little Family Walk in the water.. 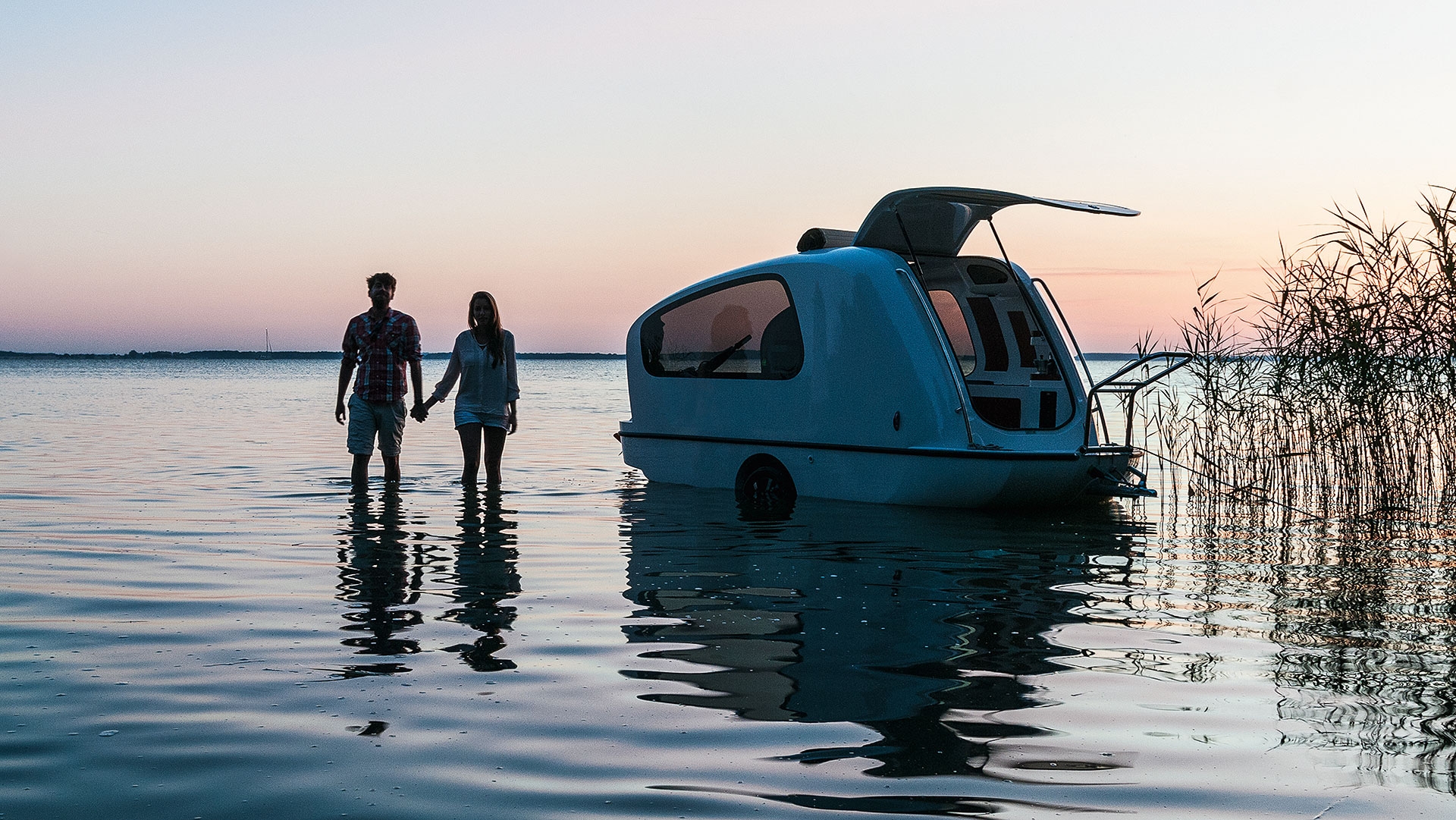