Artists and artists "I am an enemy of the heroic in art because I believe that pathos makes people small”, Erwin Wurm said at the start of his exhibition in Frankfurt. His work is one of the most interesting, funniest and brightest contemporary artists.

Erwin Wurm is a sculptor born in Austria 1954. He lives and works in Vienna, in Austria. Erwin Wurm has been very influenced, in his early years at the Art Academy of Vienna, by approaches the Fluxus artists. In the mid 90, he designed a series of "One Minute Sculptures", where he asks himself or models with unexpected positions, cluttered with everyday objects, prompting the viewer to question the very definition of sculpture. It seeks to use the "shortest path" to the creation of a sculpture, a quick and clear form, sometimes humorous. Like his sculptures are ephemeral and temporary, they are captured photo or video.

Austrian sculptor born living in Vienna, which is famous for its humorous approach to formalism. What does it mean? Fundamentally, it addresses everyday objects with the eye of an artist, using humor to seduce and surprise the audience. Everyday objects, like cars. His famous series "Fat Car 'is puffy real cars, obese, sized with polyurethane foam and polystyrene foam covered with lacquer. Some said that the work is intended to criticize consumer culture in western society, but what is much more fun to think too hard about the meaning of life, is looking for some amazing sculptures Fat Car Wurm.

“Grease” is carefully molded polyurethane foam and polystyrene foam into natural shapes that we are more likely to see on a human body than on a car body.. Finished with a coat of lacquer, these Fat Cars seem to be on the verge of breaking the limits of their bodywork. In 2004, Wurm launched the “Fat Convertible” ; two years later, l'”UFO”, a car without wheels.

Wurm's work is part of the transformation of everyday objects into sculptures with absurd appearance that make the audience laugh. The creation of a work is then to Wurm an emancipation process : is freeing objects from their familiar context and make sense out of joint. It is also a challenge everyday objects process. Despite his vis-à-vis distancing of the movement "Fluxus", his work retains the major inspiration of this movement, which urges us to explore ” art ” in the course of daily life and in the conditions of individual existence of the common object.

2010 – His sculptures distort the world Erwin Wurm is a joyful cynical companion who at the same time brings the enigmatic despair of everyday life to express. Aspects of the cultural program (ZDF) un portrait de Erwin Wurm.

Taking the issue of obesity, Wurm probe the link between power, the richness and body weight. He also wants to offer a scathing critique of our current value system, the advertising world asks us to stay slim , but consume more.

Erwin Wurm, one of the most important sculptors of international renown Austria, was concerned about the expansion of the concept of sculpture since the 1980. Wurm is primarily a sculptor, and sculptural traditional concerns such as the relationship between the object and the base, the function of the seriousness, fixing the form, and handling the volume, play through all his work.

increasing, remodeling or removing volume the usual interests of many a sculptor – are given a new twist in the work of Wurm. Volume and volume’ add are treated as matters sociocrital. In 1993, Erwin Wurm wrote a book’ instructions on how to win two dress sizes in eight days. Eight years later, he made his first “Fat Car” by plumping an existing car with Styrofoam and fiberglass, which lead to, a pitiful chubby version of the original model sportsy.

Before the door’ entrance is a sculpture of the spectacular setting awaits visitors in the museum. Erwin Wurm (born in 1954), to’ internationally for his "One Minute Sculptures" as he is known for his “gras” and deformed objects presented in Wolfsburg, the motor city, in “sausage grease position” VW (Erwin Wurm). Of the “curry Bus” is at the noon show – Volkswagen sold Currywurst – original of course. With its bizarre twisted deformed cars like the Renault 25, which apparently put himself in the curve or, Volkswagen bus “telekinetic” curve, the sculptor made his idiosyncratic, humorous popular philosophical view in everyday objects. 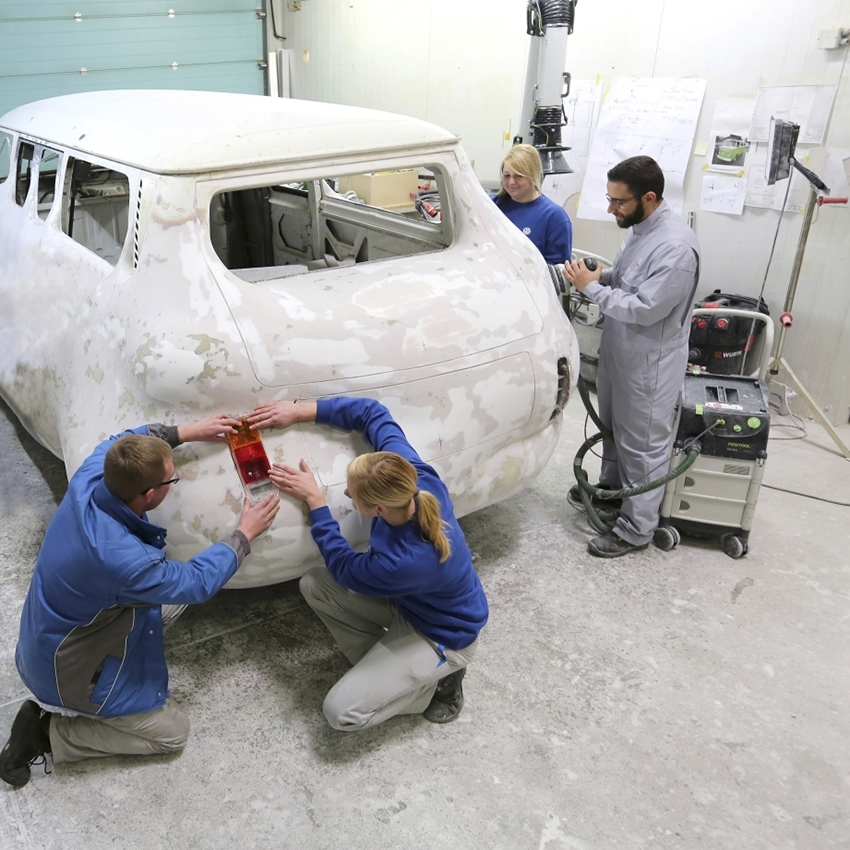 Volkswagen trainees and retirees built at the same time the artist Erwin Wurm and the Kunstmuseum Wolfsburg in the VW ( vintage connoisseurs speak of van T2b) an art Currywurstbude.

You do not dream, it’s a house overturned on the roof of a building.. Rest assured, this is not a photo montage. It is a full-size detached house that has been built into the roof of the Museum Museum of Modern Art (Mumok) Vienna in Austria !

Who had this strange idea ?
This artist, who willingly plays on the absurd, and explained his idea to the press: “The house is a symbol of nostalgia narrow and conservative, colliding with the museum, institutionalized temple of the muses”. It took four giant cranes to hoist Erwin Wurm home 24 meters tall and he had to use ten tonnes of cement and steel to achieve “House attack” (the attack on the house).
Sadly, you can not currently see this reversed unusual house on the roof of the building Mumok. Indeed, she stayed only during the duration of exposure “Keep a cool head” (Keeping carefree) of 27 October 2006 to February 2007.

For the artist who swallowed the world (Hatje Cantz) Erwin Wurm says : I am interested in the daily life. All materials around me might be useful, and objects, the subjects involved in contemporary society. My work speaks of the entity as a whole human being : physics, the spiritual, psychological and political.

Erwin Wurm is known for his humorous approach to formalism. About the use of humor in his work, Erwin Wurm said in an interview :
If you approach things with a sense of humor, people immediately assume that you are not taken seriously. But I think the truth about society and human existence can be approached in different ways. You do not always have to be serious, sarcastic : humor can help you see things in a lighter way. More recently, Erwin Wurm has worked on a series of "big sculptures cars" that are swollen, obese, sculptures grandeur nature. His latest works jostle consumerism.
His sculptures are distorted visions of the world ... but not necessarily false.

For his one-minute-sculptures had the opportunity to work in the Lille metropolis. For the occasion, fried booth to more 8 tons strangely shaped, as fondues. This aspect is reminiscent of his research on sculpture and plastic forms.. He works for the destruction of the form, deforming to obesity or anorexia, and more recently, making her literally melt. for Euralille, he revisits a strong marker of identity North, the chip stand. Freed from its original form, the volume of the house gives the impression of a soft, creamy mass. This gesture, Erwin Wurm allows the house to become sculptural work. Here the form plays with function, it questions and surprises.

Between Lille Europe station and the shopping center Euralille

Exposition “Wear Me Out ” (Wear me out) by Erwin Wurm in Antwerp Midelheim.

The Fat Car is parked in the grounds of the Hotel Dubocage de Bléville, old mansion transformed into a museum, located in the historic heart of Le Havre, Saint-François district. It occupies the courtyard of the building, where are also located 26 chairs made by Quebec sculptor Michel Goulet.
Magician of Forms, volumes and proportions, Austrian artist Erwin Wurm has given this car shapes that place it somewhere between exacerbated pride… and daddy-beard ! His fat car has all the finery of a real vehicle, with a gray body, metallic, similar to the most common models in circulation. But her obese curves and chubby seats, flesh-colored, express the excessiveness of industrial societies where man seems to exist through overconsumption ...

2013 – a short presentation of the exhibition and performance of Erwin Wurm,
"Wittgenstein's Grammar of Physical Education"
until June 1st 2013 at Galerie Thaddaeus Ropac, paris Pantin.
Video by Nikolai Saoulski.