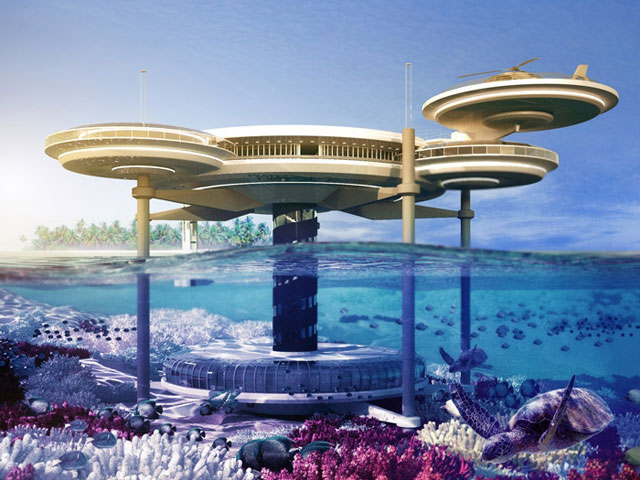 The water will be built partly under water. There will be two discs. A water above and the other submerged, which will be 10 meters deep. The two are connected by stairs and elevators, which allow access to rooms. The hotel will have 21 bedrooms, a lobby and a bar. The rooms have transparent walls, with special lighting. So, you can even see the smallest water sports. should cost 120 millions of dollars. The company responsible for the hotel's design is the Deep Ocean Technology (DOT). It states that all safety measures will be taken so that customers are not at risk. The objective of the Ministry of Transport is a part is built above the sea level, high enough that we do not take risks for tsunamis and floods. In turn, the submerged part will be a mechanism to automatically increase the surface in case of danger. With this project, Dubai is expected to receive another innovation. The Department of Transportation estimates that water hotel will also open a new field for the creation of underwater ecosystems. 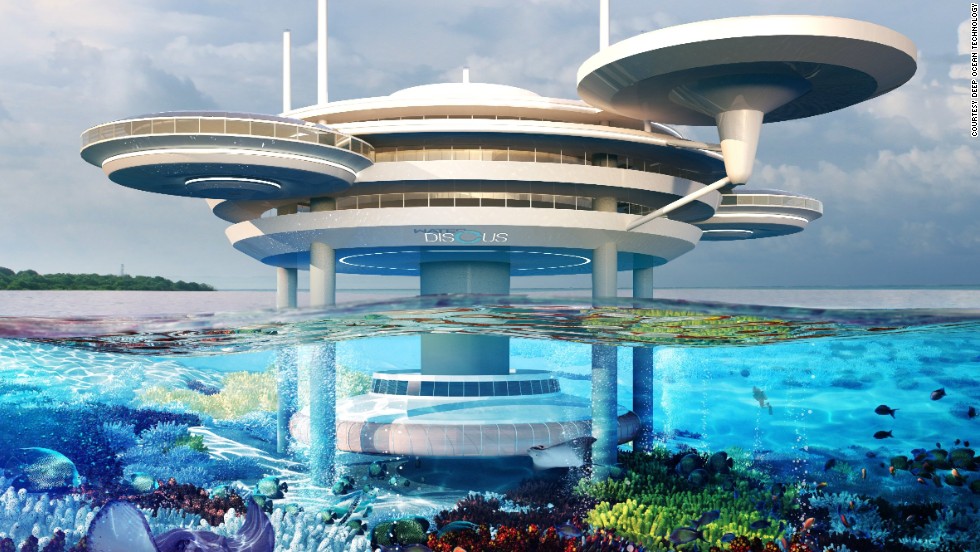 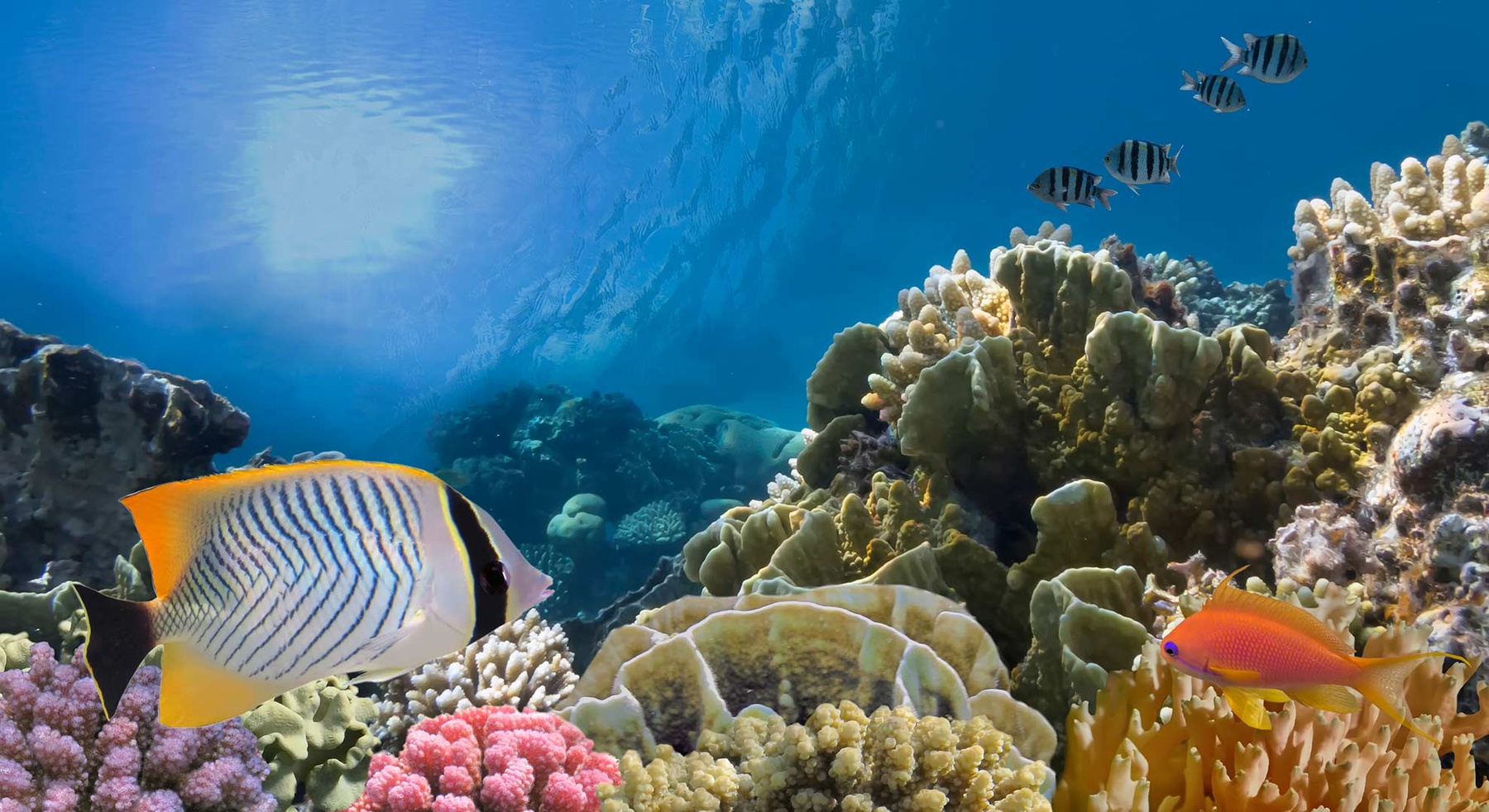 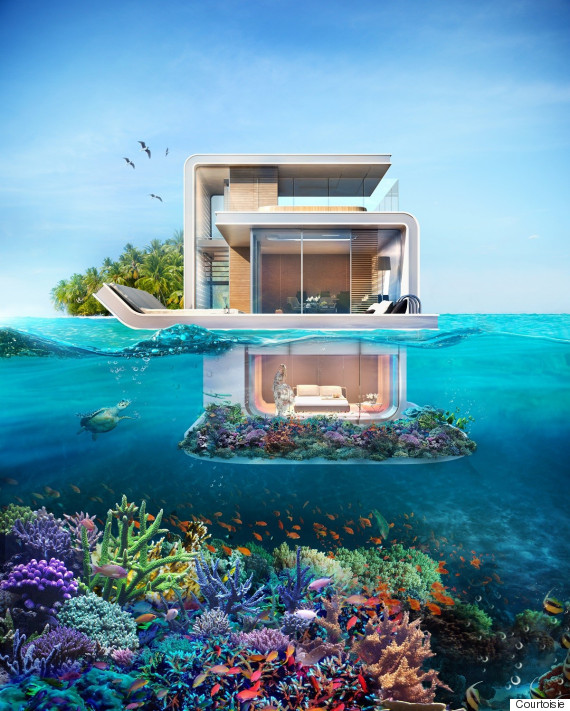 The company of Russian architecture Remistudio took the concept of an artificial biosphere and went to sea with his vision for the floating hotel “Ark”. Designed to withstand floods, tides and rising levels of the ocean as well as earthquakes and other natural disasters, the concept of the hotel and operate independently float to the surface of a lake, providing green and autonomous environment for customers, likely, Never have from ! Normally ! The Ark shell design has acres and cable system that maintains an even weight distribution to withstand earthquakes, while the prefabricated frame allows quick and easy building. The interior garden provides a lush escape for guests by acting as greenhouse and enough daylight is filtered in the inner rooms to reduce the need for lighting. The design also incorporates photovoltaic solar cells, a rainwater collection system and a frame which is protected by a layer éthylétrafluoroéthylène (ETFE) self-cleaning, recyclable – the same material used in the Beijing National Aquatics Center Apart from the eco-titles, This is an amazing design that looks straight out of a science fiction movie. We can only hope that the worst predictions of global warming are inaccurate and do not become the holiday destination chosen 22nd century. The arch was designed by Remistudio with the help of the International Union of Architects Program “Architecture for Disaster Relief”. 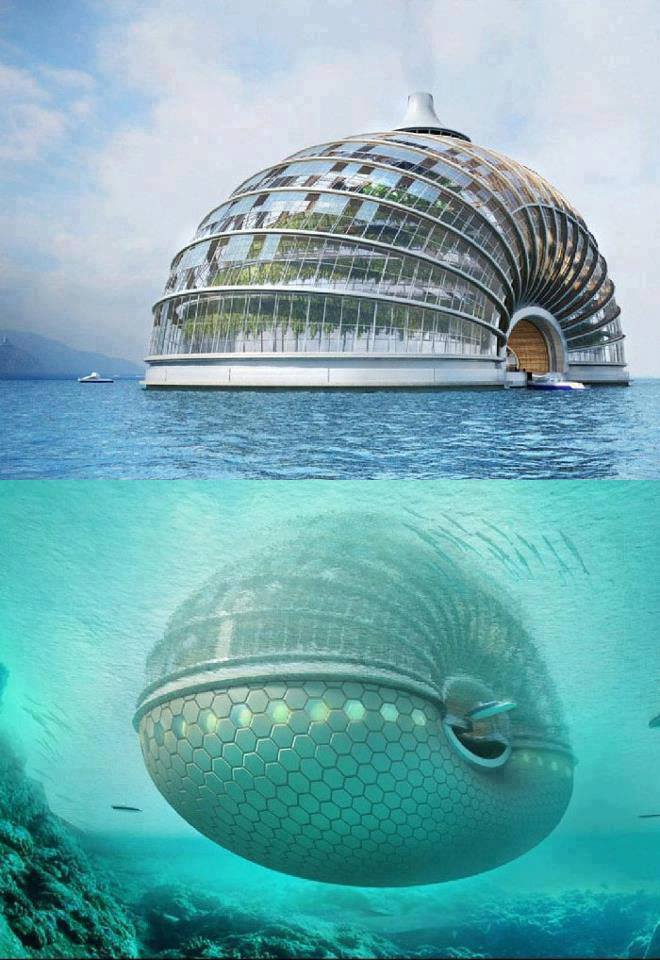 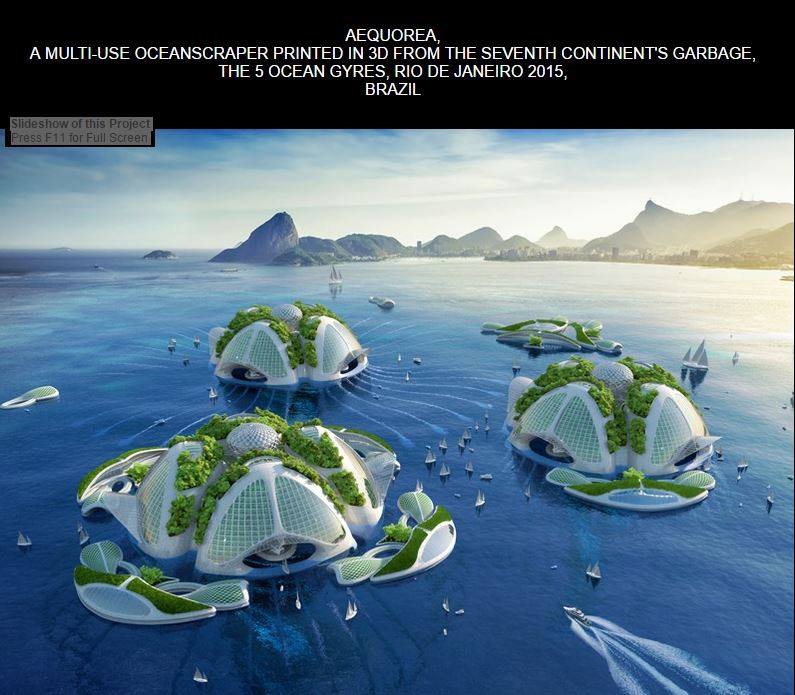 This "high-Ocean" is printed in 3D in a material composed of algae and marine plastic waste recycled…Vincent Callebaut, architect best known for having been commissioned by the city of Paris to d & rsquo; imagine what could resemble the French capital d & rsquo; here thirty years in the Paris Smart City project 2050, has recently unveiled a new project "futuristic", called Aequorea.

As usual, l & rsquo; French architect plays on a symbiosis between nature found, environmental responsibility and planning. It is through a fictitious open letter, Written by Oceane, girl 15 years and citizen d & rsquo; Aequorea in 2050, the project is presented. Aequorea is a "high-ocean", veritable floating village printed in 3D with a composite material made of seaweed and plastic waste from the "seventh continent", or 27 million tonnes of rubbish produced by the & rsquo; s humanity & rsquo; clash, imprisoned by ocean currents. Bio-inspired, the project firm & rsquo; architect named after the d & rsquo; a jellyfish. Built in different floors, Surface is accessed through four marinas, to d & rsquo; land under a dome 500 meters in diameter, that blends greenhouses, fields & rsquo; organic farming and community gardens. Under the & rsquo; water, four tentacles allow the Aequorea to "swim", for stability, prevent seasickness, and create the & rsquo; energy for its development.

Autosuffisante, this underwater city uses multiple means to provide renewable electricity to its 20 000 potential residents, renamed "Aquanauts" in the discourse of OCEANE. The field d & rsquo; turbines lining the seabed s & rsquo; adds, inter alia, a central océanothermique, using the temperature difference between warm surface waters and colder those depths to produce more d & rsquo; electricity. It also allows, through a separation process of the & rsquo; water and salt, to make the & rsquo; fresh and sea water potable. Aequorea should s & rsquo; & rsquo push up; a thousand meters below the surface, sure 250 floors, which will host housing, but also fablabs, offices, coworking spaces, underwater farms or science laboratories. Although obviously still at the stage of research and development, the cost of building such a project is currently estimated at around 1950 euros per square meter by Vincent Callebaut Architectures.

Anti-Smog : a breath of & rsquo; oxygen to Paris

Anti-Smog is not a science fiction movie title but the name of a project by the Belgian architect Vincent Callebaut. This futuristic ecological site aims to recycle and purify the polluted air in the Paris region. Right here, we think sustainable development, we consume renewable energy design and construct ! Discover the project in pictures.

Flying saucer, No futuristic city, right here, one enters just in the sphere of Vincent Callebaut. The young architect has created Anti-Smog, a green building and design consists of two structures 100% sustainable development. Original forms, they are closely connected to each other by a gateway.

Located in the 19th arrondissement of Paris near the Canal of Ourq, this ecological prototype wants self-sufficient, responsive to its environment and especially decontaminating. The first building, called Solar Drop, looks like a flying saucer. It has a photovoltaic blue roof 250 m2 that captures sunlight to convert into energy. Made from "green" (titanium dioxide, polyester fiber ...), its superstructure reduces air pollution. Solar Drop also has the ability to absorb and retrain, by photocatalytic effect, the cloud of toxic gas emitted from the Parisian traffic. Cosy and bright, this ecological bubble will house a cafeteria and a large multipurpose room exhibitions.

Closely linked to the Solar Drop, the Tower of the Winds (Tower Wind) rises in the sky 45 meters high like a spiral that goes to infinity. Glass composed, the facade splits to reveal a fiber structure of polyester cushions covered with plant. Furthermore, small wind vertically fixed nestle in small slots. Objective of this equipment : recover the prevailing winds. At the top of the building, a hanging garden just finish the race of the spiral. If for now, this project remains hypothetical, it none the less daring both environmental and architectural plan. challenge therefore for this "urban graft 'that aims to purify the air in Paris. 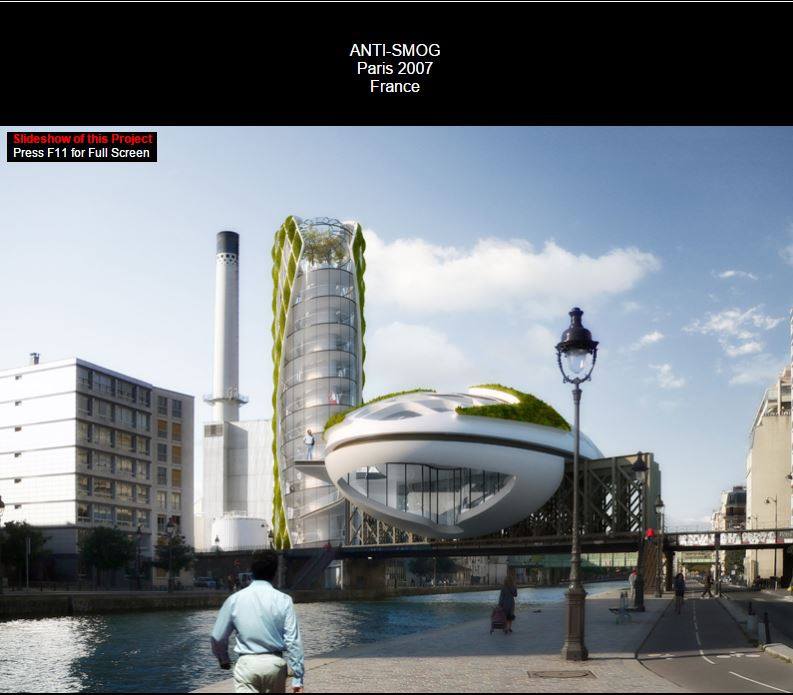 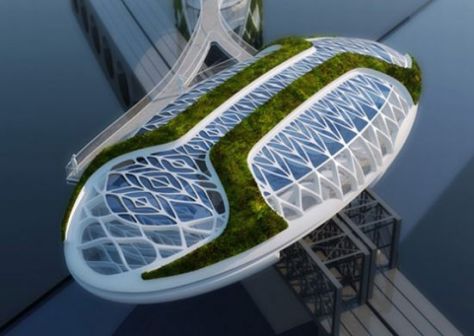 Each roller is a true eco-district of this new vertical city model. structurally, they consist of steel rings which come to be bent around horizontal double decks. These rings are connected to the central spine by Vierendeel beams which allow a maximum of flexibility and spatial modularity. These huge beams form a cross plan that receives individual programming of each roller. The interstitial spaces between the cross and skin megaliths hosting large hanging gardens foster as greenhouses. Real live rock playing their cantilever, crystalline rollers are eco-designed from renewable energies. Open air, an epidermis of photovoltaic solar cells and thermal photo ID and axial turbines forest cover zenith roofs dotted with orchards and vegetable gardens hanging. Each roller thus has a positive energy balance, so in electrical terms, calorific, a food. The "Asian Cairn" summarizes our architectural philosophy that turns cities into ecosystems, neighborhoods in forests and buildings in mature trees transforming each constraint into opportunity and each waste into renewable natural resource ! The master plan is designed as three interlocking spirals that represent 3 elements that are fire, land and water, all arranged around the air located in the middle. Each spiral is wound around two megalithic towers and form of urban ecosystems réimplantant biodiversity at the heart of the city in the form of large public orchards and fields of urban agriculture. Large pools of viticulture and vast phytoremediation lagoons there are recycling gray water discharged from the inhabited vertical farms. 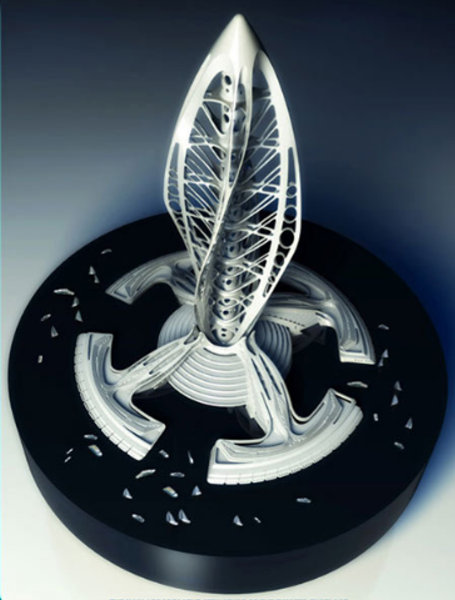 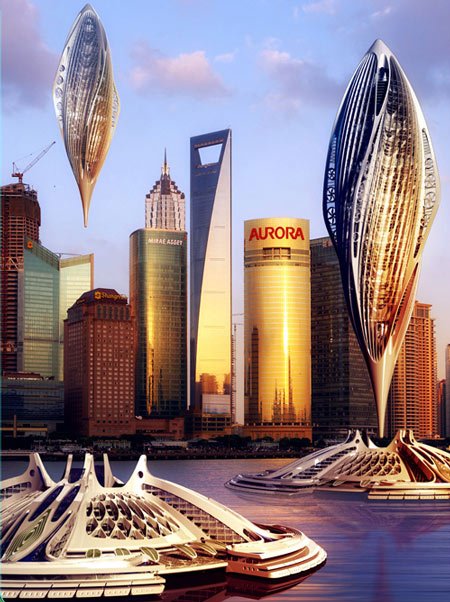 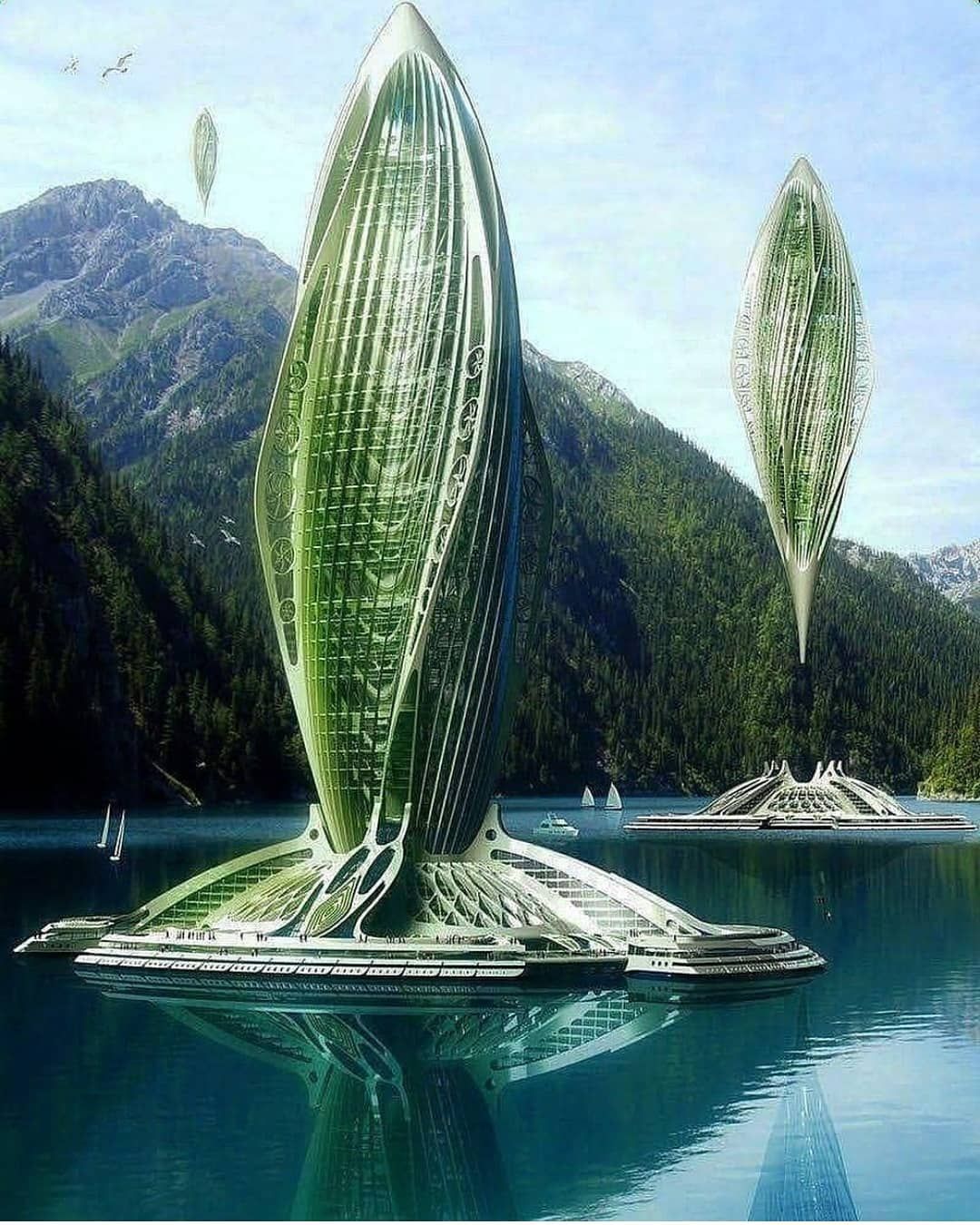 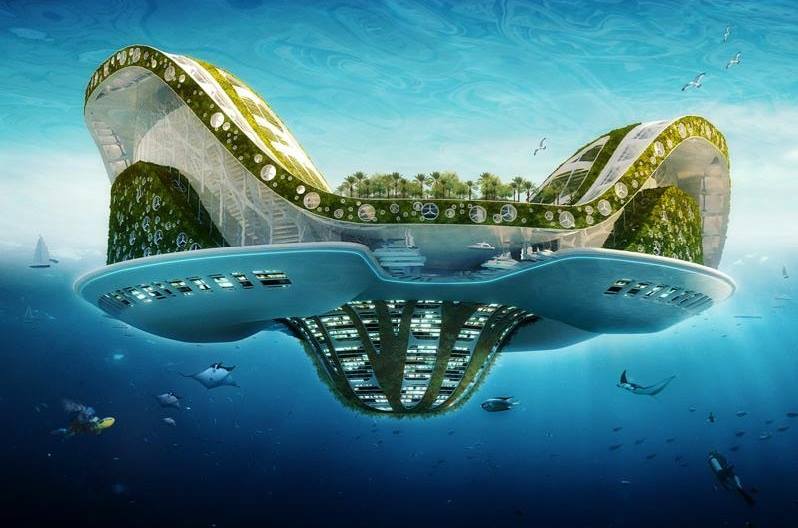 "City in the sky" is a concept on an imaginary peaceful oasis in the- above the city developed and polluted mega where’ one can escape the everyday noise and stress. The concept is inspired by the lotus flower that is known for its ability to emerge- over troubled waters pure and clean. Although realistically presented, the concept does not intend to be realistic in terms of structure’ engineering or real life environment. music and sound design by Georgi Marinov.