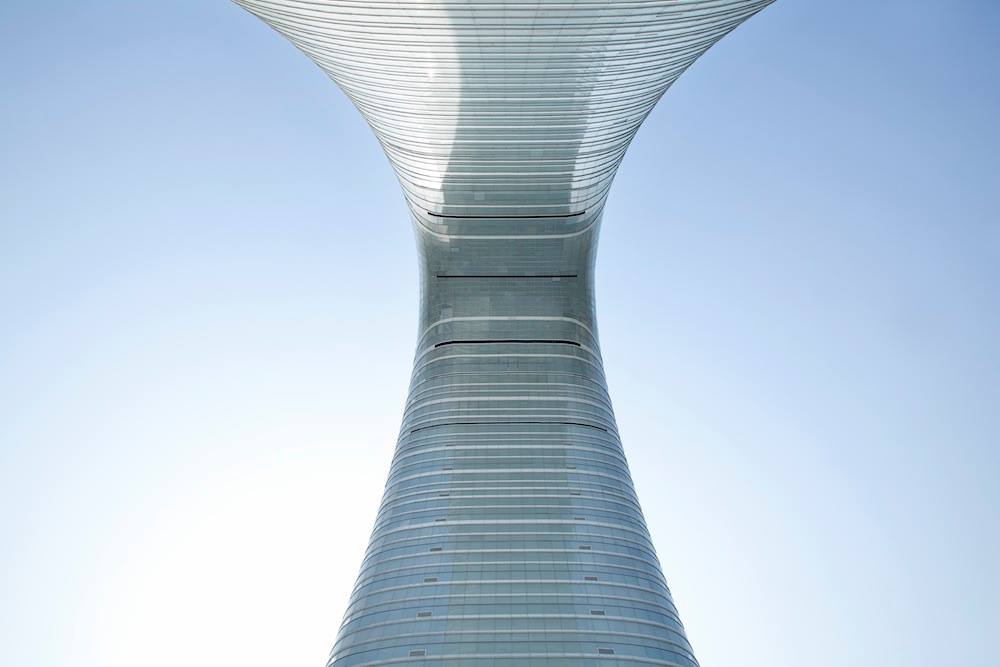 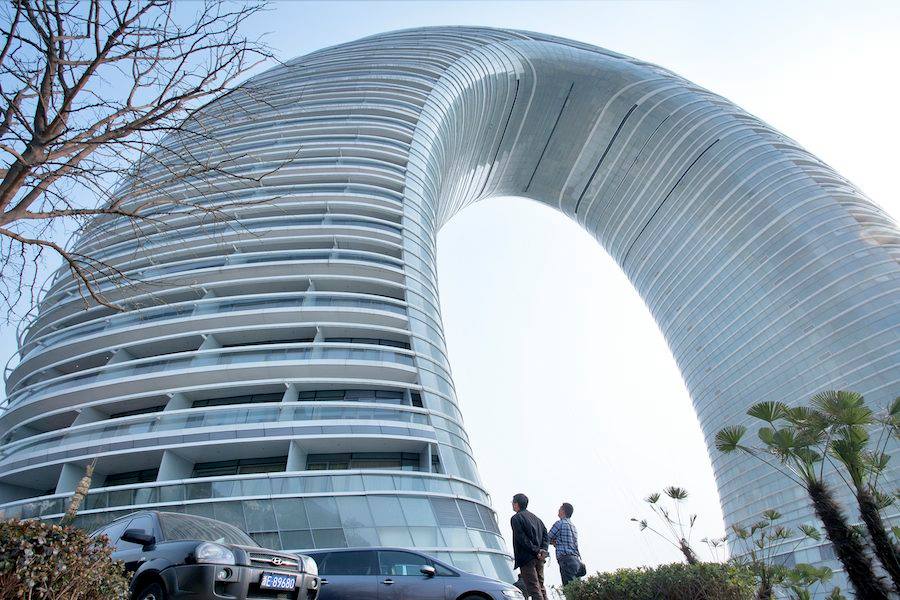 One might think that this hotel does not exist yet, it does exist

More than 100 meters high and 116 meters wide, this exceptional hotel experience extends over an area of 75 hectares, bidder 321 bedrooms 40 suites, 37 presidential villas and suites. The investment 1,5 billion shows the importance of this business, resulting in a total floor area of 95 000 square meters.

This impressive hotel is the optimal answer to the site settings and context in general. Fundamental to the logic of the unique shape of this impressive design but bold is the idea that the building consists of hotel rooms that require a lot of natural light and cross ventilation. In addition, the horizontal section and forms ensure lake view for every room, independently of its position. The metal façade becomes luminous night with an LED system on the envelope displays animated textures and colorful patterns, also reflected on the lake surface, creating a playful atmosphere and aesthetically pleasing. This peaceful architectural statement gives the impression of a door, while leaving the water's edge of Lake. Almost passive during the day, this night very strict building turns into a roller coaster of the visual effect, welcoming guests.

The Visionary Studio MAD Architects designed the Moon Sheraton Hotel on Nan lac Tai in China to underline the link between man and nature.
The ancient Romans said Nomen Omen … So we guess they must have planned MAD Architects Sheraton Hotel project Moon Hotel from the rise over Nan Lake Tai, mid – way between Shanghai and Hangzhou. MAD architecture is famous for developing futuristic architecture based on a contemporary interpretation of nature. Moon Hotel Sheraton perfectly reflects this philosophy by integrating’ architecture with the & rsquo; environment … But also taking full advantage of the waterfront of the & rsquo; building. Indeed, the circular structure is its reflection in the & rsquo; water, creating a surreal image and a real connection between ghost and. When the night falls, l & rsquo; entire building is lit brilliantly by both its interior and exterior lighting. soft light jacket around & rsquo; hotel and & rsquo; water, resembling the rising moon over the lake, but also the creation of & rsquo; a 8, a lucky number in Chinese culture.

The form & rsquo; clear ring posed a great challenge for the structural design. A core of reinforced concrete tube with high capacity, light weight and excellent resistance to earthquakes has been implemented to reduce pollution & rsquo; environment during construction. The curved mesh surface structure makes the solid construction. L & rsquo; hotel facade is covered with d & rsquo layers; white aluminum rings and fine textured glass, bringing the illusion. The annular shape of the & rsquo; hotel allows all rooms for a nice view while increasing natural light in all directions. L & rsquo; public space like arc at the top has great views open and can act as a “site in the & rsquo; air” for large-scale activities. The Moon Hotel emphasizes the harmony of’ man and nature and enhances the sensual and spiritual experience of visitors, becoming probably Huzhou new symbol of’ humanity and nature “. 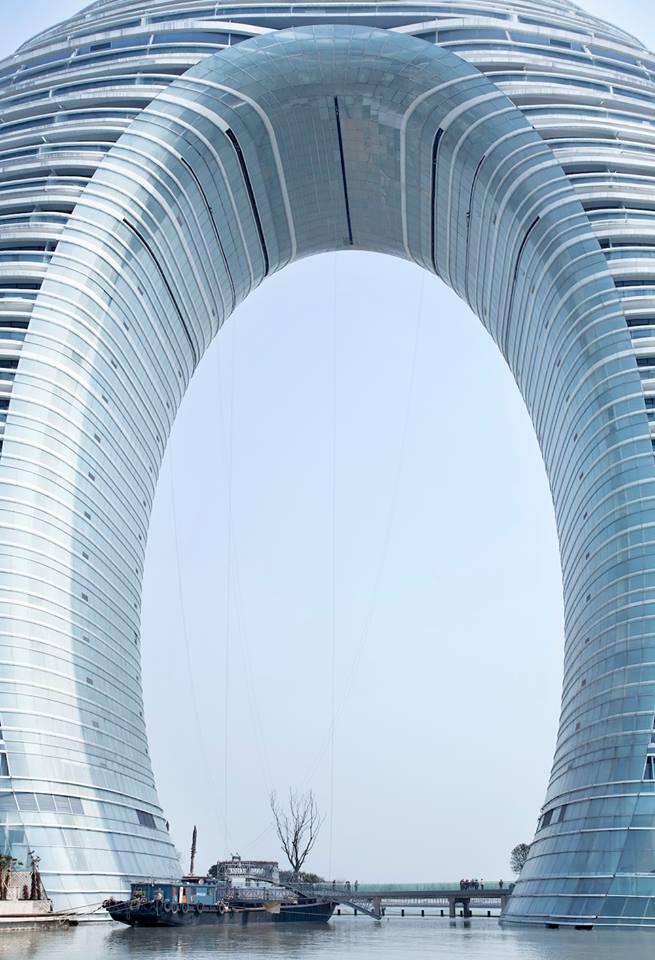 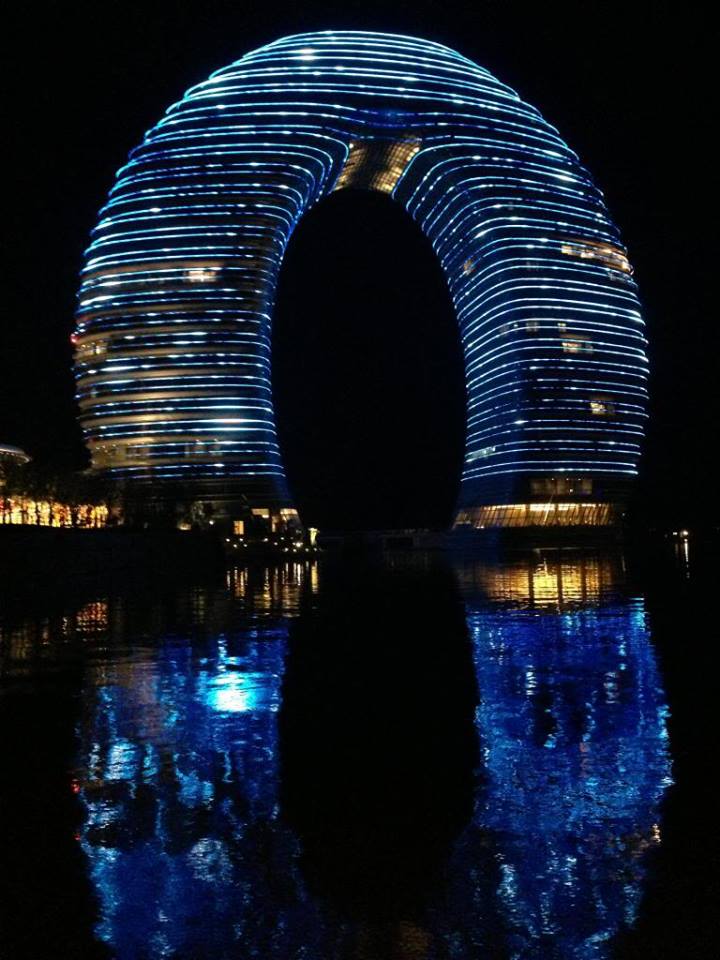 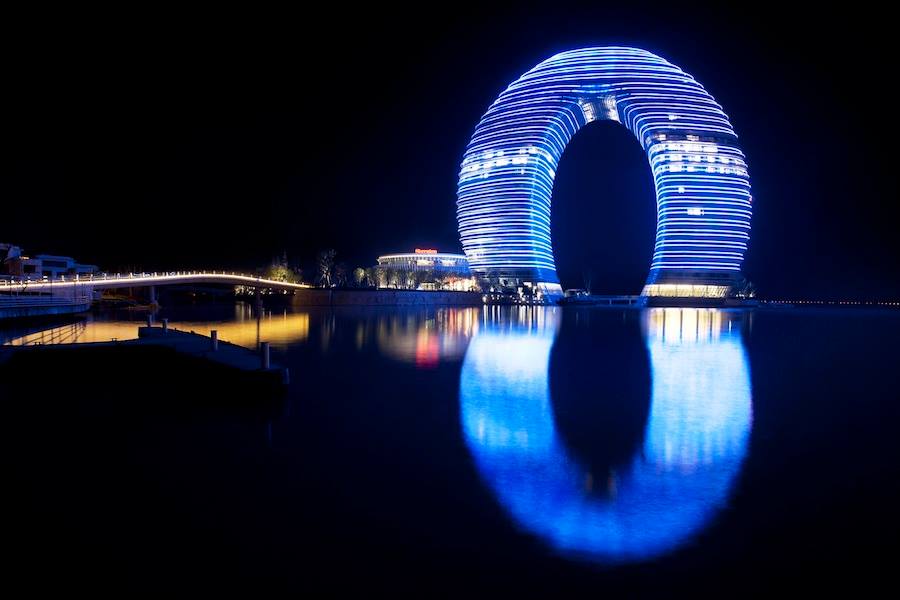 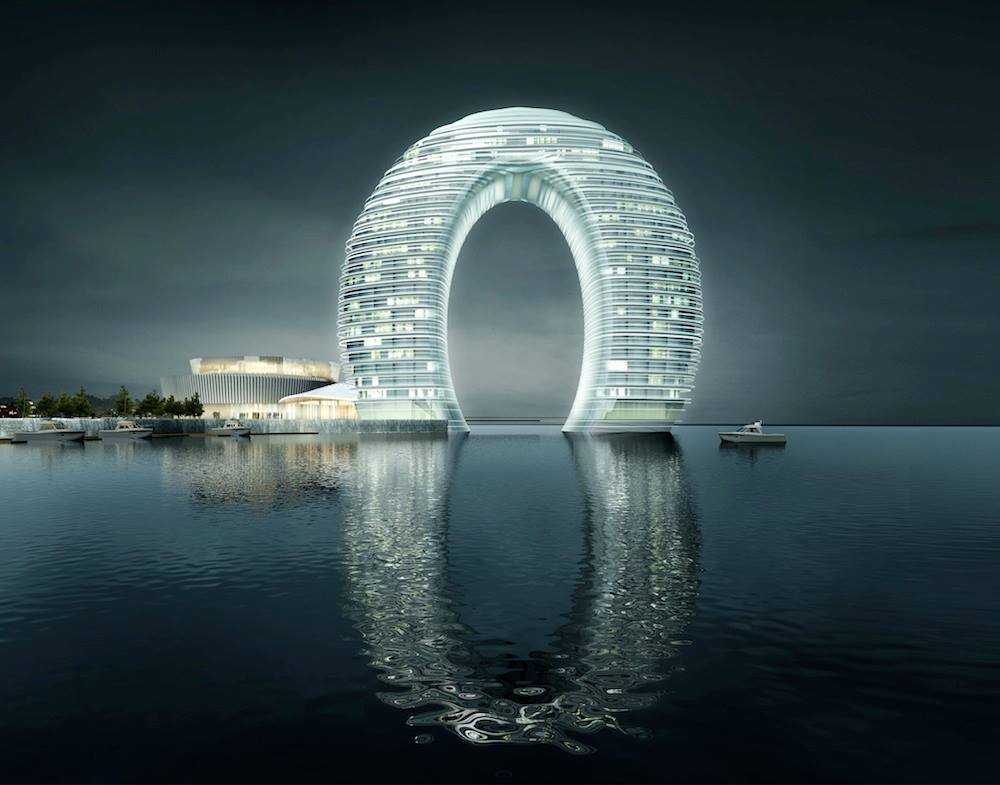 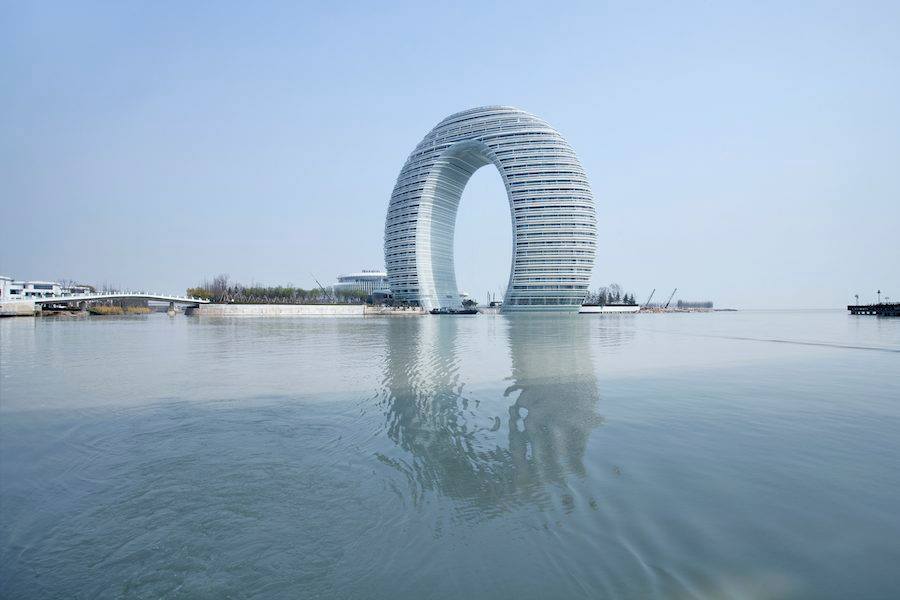 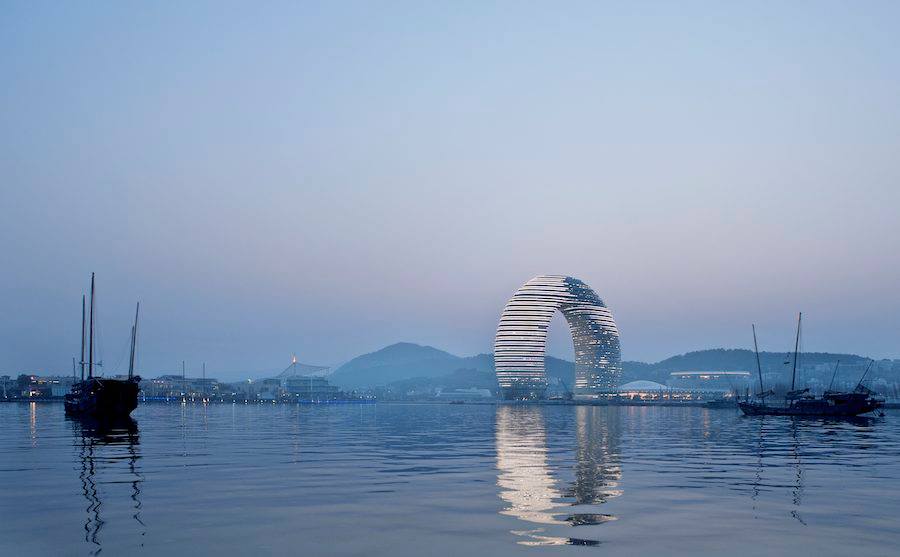 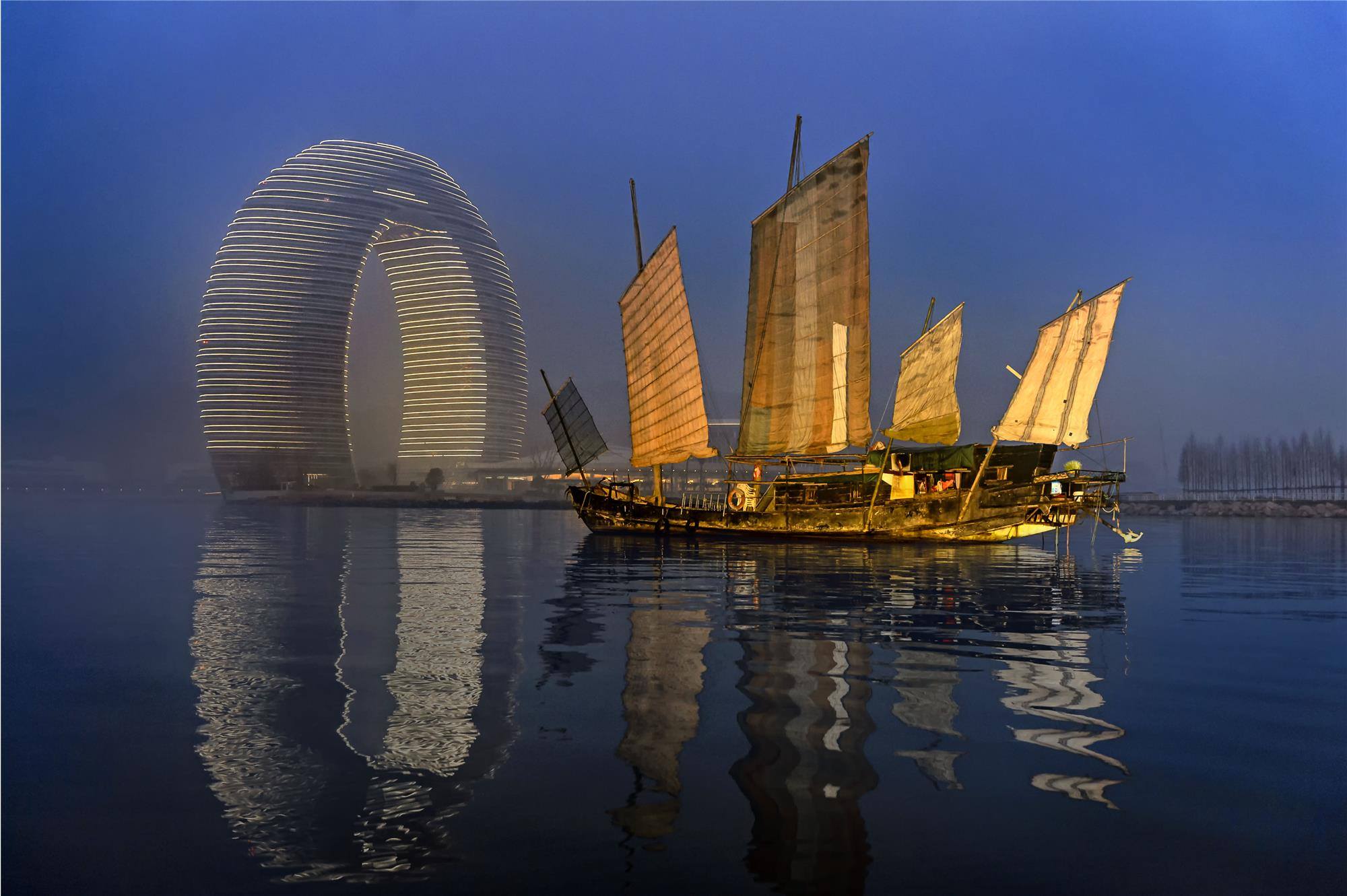 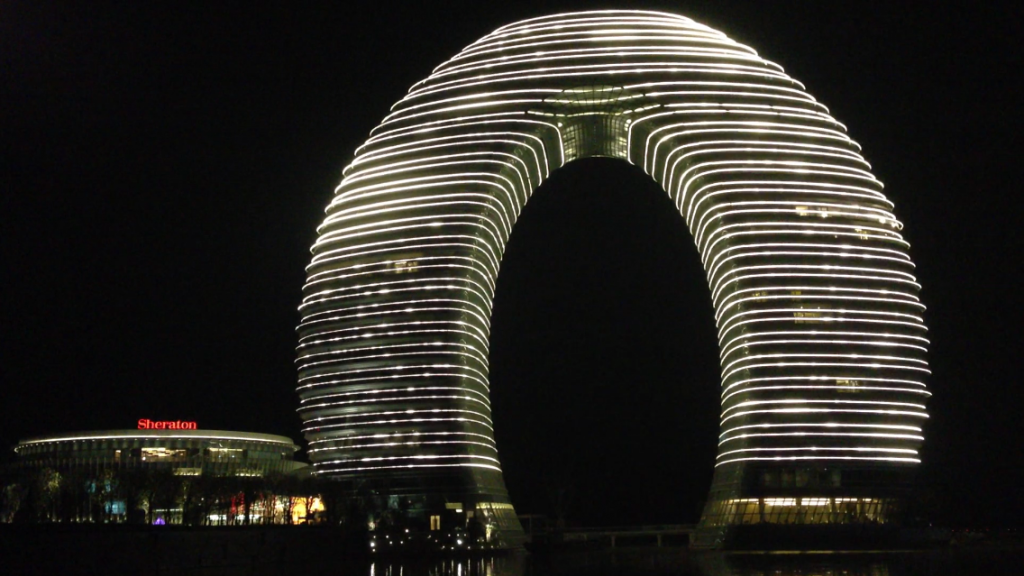