You have to start the story of six Bubbles Cases by something concrete, so we decided to start with a summary document of the facts of the Year 1966 Batiplastique the company founded for the occasion by John Benjamin Maneval. We allowed ourselves to remove all blithely names mentioned in this document to avoid compromising person. We also chose to publish excerpts of the document purporting to us important to read the history.

general meeting of shareholders of the company Batiplastique,
the 01 February 1967

extracts:
The development of a prototype that we judge the least revolutionary continued during the first half of the year 1966 and its implementation was entrusted to Etablissements Toy-Dubigeon Normandy, in the month of March of that year.

The Department "Plastics" of Ets. Dubigeon had to seek the development of certain materials before their implementation. This explains why the delivery of the prototype originally scheduled for late June only take place in late September.

Parallel tests must be performed in the laboratory of Champs, in particular:

Technical meetings continued during the 1is quarter 1966 at regular intervals, every Wednesday afternoon at M. Maneval.

A first sanitary and technical block containing all the equipment and in particular:

The day part will include :

The night will include:

At the same time a brochure was developed.
This pamphlet was released in the month of March.

Thus the 13 July, M. Maneval and I've met the Director General of the Société Centrale Real Caisse des Dépôts, as you know, made many holiday villages with the Villages Vacances tourism agency (V.V.T.)

He was very interested in our project. He shared with us some valid objections, for example the living area that is too large, some reviews on the external appearance and was interested by the price that we had advanced 30.000 F for the fully equipped bubble. He gave us an appointment for a tour of the prototype.

At the beginning of September, M. Maneval went back to work three weeks after proposing a new block SMET, more compact and of a “more flowing” volume which satisfies the eye much better without losing the technical qualities of the first. The assembly lasted all day on Tuesday 20 and ended, all furnishings included, Wednesday 21 at noon. Performed with an unsuitable crane, rapid assembly of such housing was thus demonstrated.

That's when the Ets. Dubigeon Normandy sent us an estimate of the expenses already incurred and still to do to achieve these two prototypes.

Given the magnitude of these expenses I summarized you:

the first prototype with prices and amenities block SMET: 53.000 F

We estimated, with M. Maneval, it was better to stay the execution of the second prototype and had to monitor even more closely the upcoming expenses.

Finally the 14 December was organized by a tour of the prototype:

To receive these people M. Maneval and M. Toy, all day, in extreme cold, sacrificed themselves for the good cause. I take this opportunity to thank them.

M. Maneval a, since, sent to each of these Holiday Villages officials a small file containing plans and bubble flyers so they plan more before their own problems and make us their potential needs.

The year 1966 has allowed us to realize that our project was favorably reviewed by many people, the only criticism of the price and a difference of opinion on interior design types provide.

We completed the program we had set upon incorporation of the company Batiplastique and now we will go to the 3th stage of this program, to know:

the realization of a group of 10 bubbles that we want to install in the holiday village of the Works of S.N.P.A. in Gripp, near La Mongie in the Hautes-Pyrénées. Here again, We were somewhat disappointed because we have only to get this command.

We will therefore strive to achieve as soon as possible as it will allow us to study the problems of starting a small series.

We will study with users the ability to run different types of interiors. We then study the behavior of people.

And it is only then that we will look to do some publicity for this production, that we refused to do so far considering that we were not sufficiently prepared.

therefore it will be necessary 1967, when Dubigeon Normandy Ets have studied closely the price, carefully consider the commercial part of the case.

in parallel, I would suggest that we in the study, in 1967, and achievement, the prototype of a cell 3 shells.

The bills mentioned in this document have been set by the company Ets Batiplastique Dubigeon Normandy with equity primarily from M. Maneval.

The mold & rsquo; a cover made of polyester reinforced by a metal frame ! 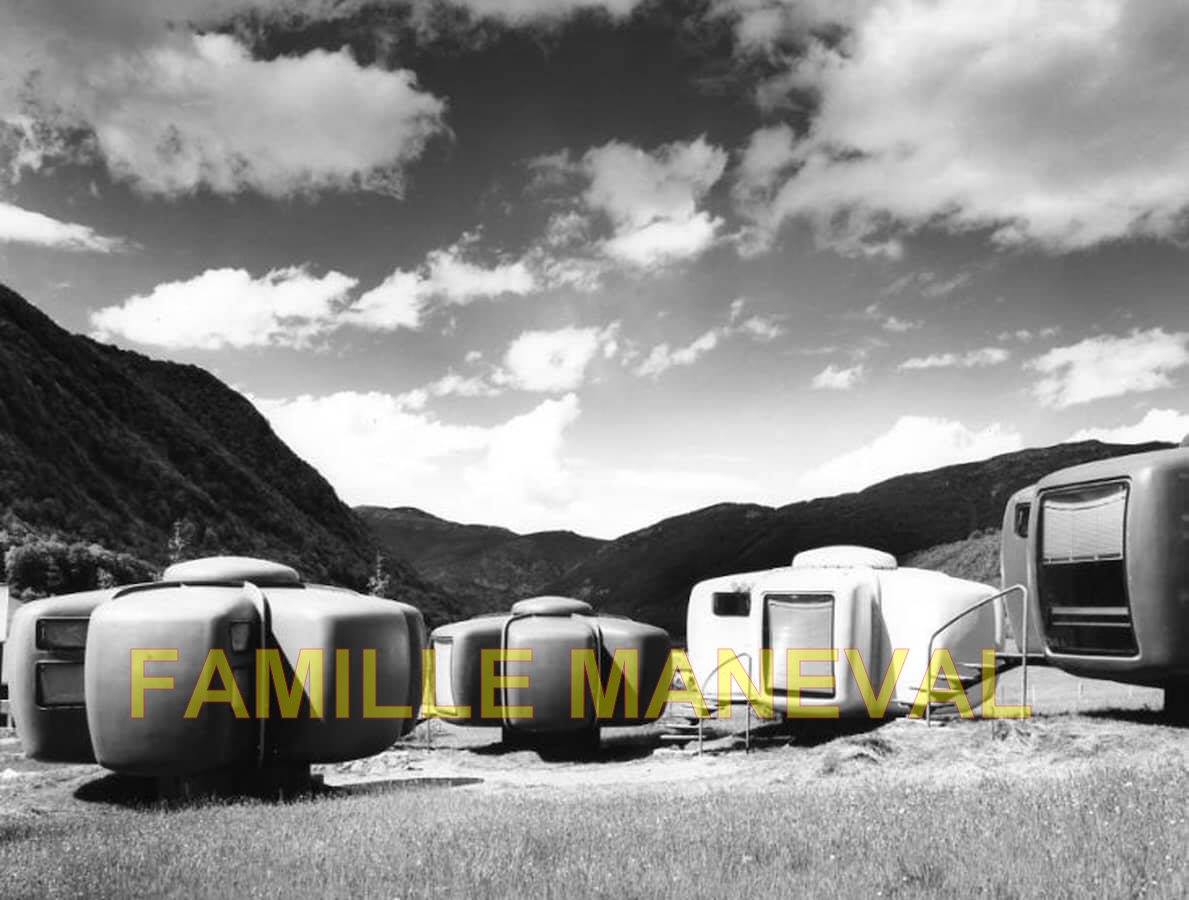 Jean Benjamin Maneval (Amiens) (1923-1986) (Paris) practitioner and urban and sociological researcher Architect, he studied at the School of Fine Arts in Paris and played a central role in the reconstruction of French towns in the years following World War II.
Jean Benjamin Maneval studied at the Ecole des Beaux-Arts in Paris, then at the Urban Institute of the University of Paris. Resident of the Institute in Britain in 1952, he enrolled in the order of architects 1954. His first project involves plans of the industrial area of ​​Lacq, then he designed the first new city in postwar France Mourenx in the Pyrenees for SCIC. in parallel, He is interested in the avant-garde architecture, he knows the research Ionel Schein, he met through Michel Ragon, and interested in those of Jean-Louis Chanéac and Pascal Haüsermann. Furthermore, his stay in England was introduced to the visionary architecture of Archigram (Plastic capsules Warren Chalk ... ) Maneval focuses its research on plastic house, He then developed a partnership with the Petroleum Aquitaine, Elf became today, this relationship is the source of the only successful commercialization of a house entirely of plastic !
House Bulle 6 shells. Jean benjamin Maneval participates in numerous urban studies for new cities and realizes important housing complexes with the Central Real Estate Company of the Caisse des Dépôts and the Central Company for the Equipment of the Territory. It also works to coastal development in Languedoc, then for winter sports resorts in the Alps Belleville, Gourette and Pierre St Martin in the Pyrenees. In the mid 70, he turned to international projects : Beirut port development, reconstruction of Agadir, Buenos Aires projects. After 1977, he works in the United States on the outskirts of Washington.

Postal edition Rex Card
flu, Is a hamlet in the commune of Campan (Hautes-Pyrénées)