The Photo above is an excerpt in this link :

La Futuro and or Maison Futuro, is a prefabricated housing designed by the Finnish Matti Suuronen

One hundred copies of this house were built between the late 1960 and the early 1970. Their distinctive shape in the style of flying saucers and their entry into airline airlock make these very popular among collectors constructions. Futuro consisted of polyester plastic and fiberglass, measures about 3 meters high 8 then a second version of 5 meters in diameter.

The measuring prototype 8 meters in diameter, weighs 4 Tons and can accommodate up to eight people.

Futuros are mass produced after the architect reduced their size to 5 meters in diameter for easy transport.

The art dealer Benoit Ramognino installed a Futuro House in the heart of the Dauphine Market in Saint-Ouen. It is now used as an event space by Benoit Ramognino who is now at the Marché Dauphine:

The FUTURO installed in 1973 in front of the C.N.I.T Defense square

At the Center for New Industries and Technologies on the forecourt of Defense in Paris.

A round house Futuristic The FUTURO 36 square meters fully equipped with plastic furniture, four meters high at the futuristic shaped O.V.N.I. made of polyester reinforced with glass fibers. The Futuro house on display here measures approximately 4 height meters for 8 meters in diameter. Its surface is 50 m2 and its volume 140 m3 : it is divisible for the & rsquo; interior. Originally, this mobile unit was designed by Matti Suuronen at the request of a childhood friend, who wanted a vacation cottage ready to go to the mountains. The prototype was then developed and produced a hundred copies in several colors (blanc, bleu, orange, vert, yellow) but the adventure ended after the oil shock of 1973. The copy that is on sale is not necessarily known to all. He had indeed been purchased 1973 to house a sandwich shop in La Defense. And she stayed there until 1980, start date of construction of the shopping center Les Quatre Temps. After being stored for 20 years and then fully restored, the Futuro house is back on the market.

1973-1980 : 7 years on the forecourt of La Défense, the Parisian business district, the Futuro bubble transformed into a cafeteria.

2010 : Futuro changes hands, it became the property of a passionate collector, determined to offer an active retirement and deserved.

2005 : XXO Design major player in Europe in acquired after years of research.
The futuro is then restored and finds the way its original color orange.

(In the foreground) office ” Boomerang Desk “

Icon space of the space era Maurice Calka – Sculpture, designer and urbanist Maurice Calka (1921 – 1999) The "Boomerang Desk" designed by Maurice Calka and produced by Leleu in Deshays 1969. Late 60 think the Boomerang desk (1969) was both introduced at the Elysee (Georges Pompidou) and adopted by Kanye West.

The Futuro s & rsquo; is put to market Dauphine chips of Saint-Ouen; uNo luck because it is the only visitable copy on French soil...

At the Dauphine Market.. 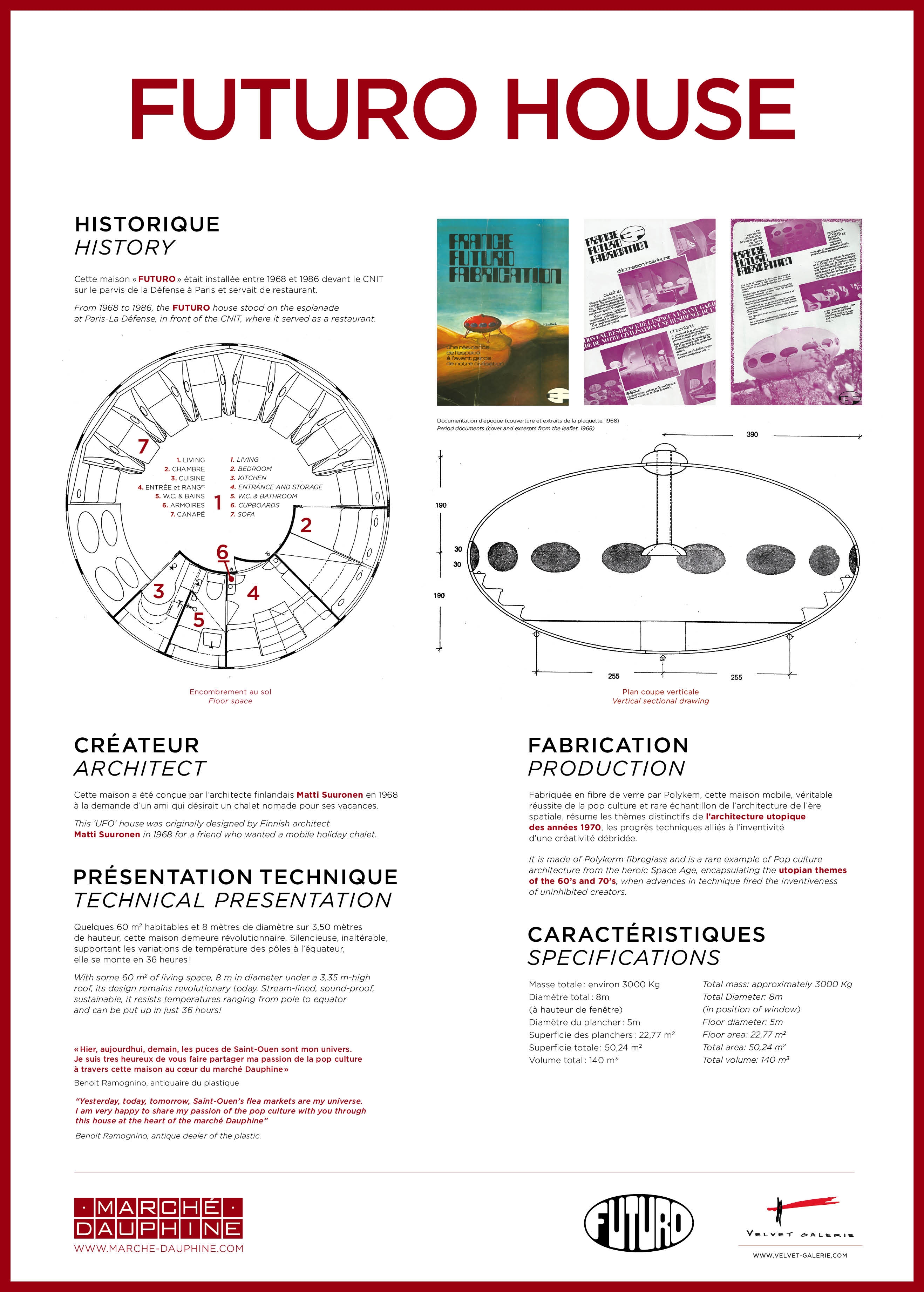 The measuring prototype 8 meters in diameter, weighs 400 kilos and can accommodate up to eight people.

TOMORROW&rsquo;S HOUSE FROM YESTERDAY
Back to the future
FUTURO de Matti Suuronen

The entrance to the folding stairs of a Futuro restored house located in Espoo, Finland.

It wants, for a skiing holiday, a house ready to employment and land on the slopes of the mountains.

Following the general enthusiasm, Suuronen considering mass production of the Futuro, and changes the format, reducing it to 5 meters in diameter, to become more portable.
Extensive international promotion campaign is launched.
Germany 1970 : Flower Power is past, the moon was conquered, optimism related to the love of technology used for motor company, everything seems possible.And this thanks to the plastic material that makes the world so colorful and life so easy. At that time, ASV Stübbe shows the design study carried out by architect Matti Suuronen Finlandois: The Future-House (home of the future) - This vacation home is also on display as a design study at the Museum of Modern Art in New York…

Almost 100 similar copies were made over the following years, but the oil shock of 1973 generates the end of production of this house…

Michael De Vera: Photo of a period of fashion in iInterior of a Futuro House, 1970. 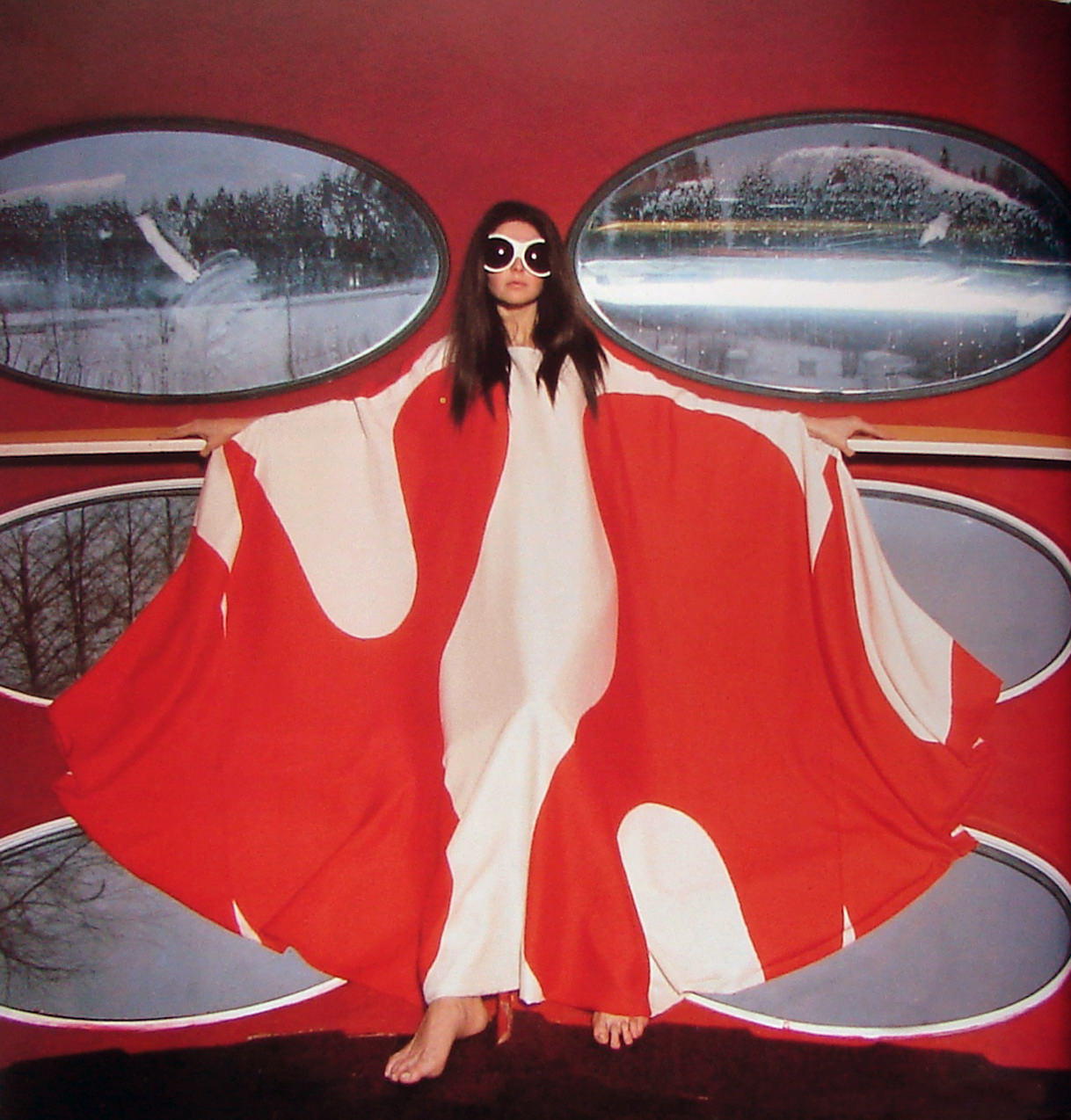 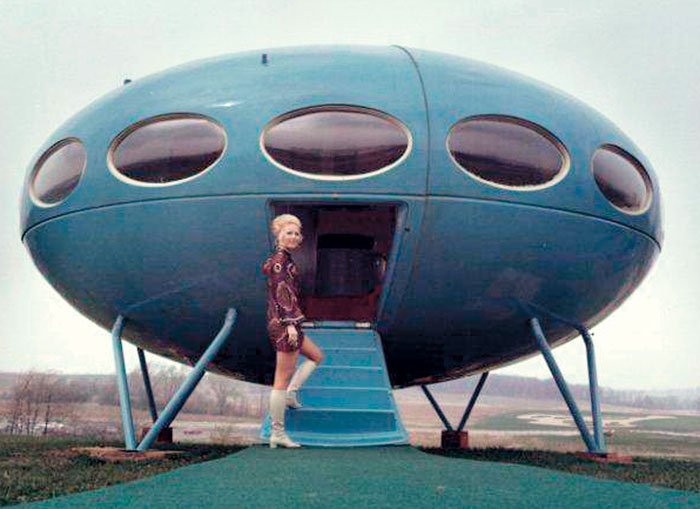 An abandoned road Futuro House in the United States..

Following the general enthusiasm, Suuronen considering mass production of the Futuro, and changes the format, reducing it to 5 meters in diameter, to become more portable.
It wants, for a skiing holiday, a house ready to use and to put on the snowy slopes of the mountains. Space capsule on adjustable pillars, Futuro reflects the optimism of the sixties : the ideal of a new era, plastics as construction material; mass production, assembly in modules mobility, elliptical shapes, pop colors…

FUTURO HOUSE – Matti Suuronen – 1968
It is produced in 1968 to meet the demand of a childhood friend of Suuronen, the doctor. Jaako Hiidenkari. The space capsule on adjustable pillars, Futuro reflects the optimism of the sixties : the ideal of a new era, plastic as a building material serial production, assembling modules, mobility, elliptical shapes, pop colors..

The Design Museum, Helsinki, Finland of a Futuro model and an exploded view
Source : The Futuro House

During summer 2018, a Futuro House has been installed in the Hanging Gardens of Le Havre (France)

Arja Miller, commissaire de Plastic heart, commissioner EMMA, interviews visual artist and director Mika Taanila on the design, the inspirations and the stages of work of the work of the 50th anniversary of Futuro.