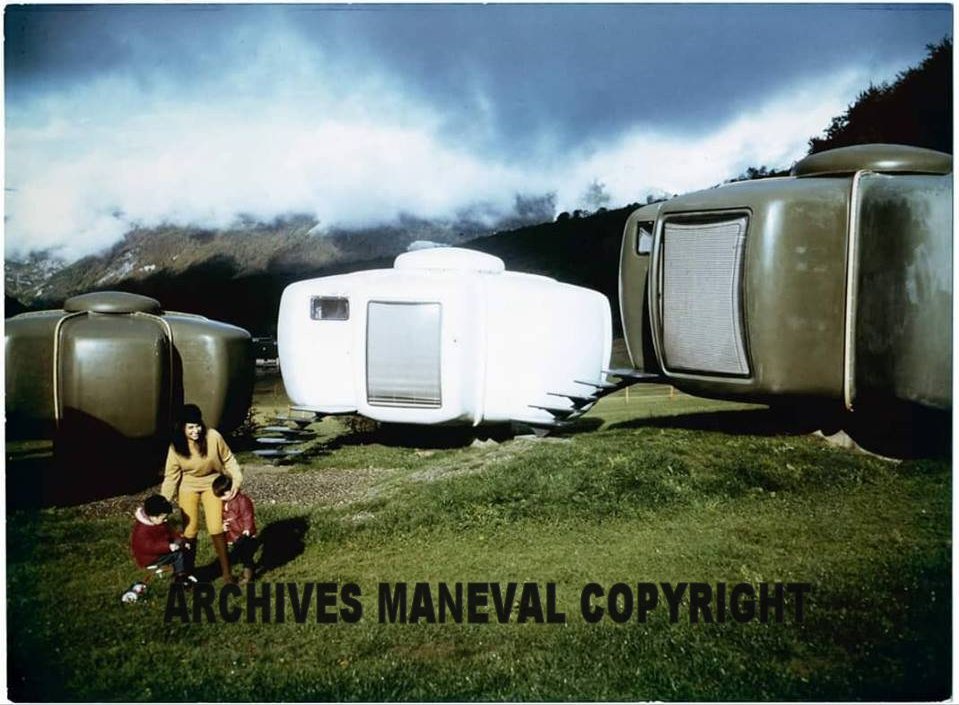 Establish the truth on the Bubble 6 shells

It is marked as nonsense on the Internet, that we felt compelled to correctly rewrite things about him.

The bubble 6 shells is a daisy shaped plastic house to 6 petals. It was created from scratch in the sixties by the architect Jean Benjamin Maneval, Dad Virginia, Webmaster BubbleMania.fr.

It was designed primarily to be a second home.

Nevertheless it was suitable for many other uses because of its originality and its construction principle.

So has she been provided with various development plans :

It was made entirely by Dubigeon Normandy - Plastic Division, Grand Quevilly, Seine-Maritime in the Normandy region, near Rouen. 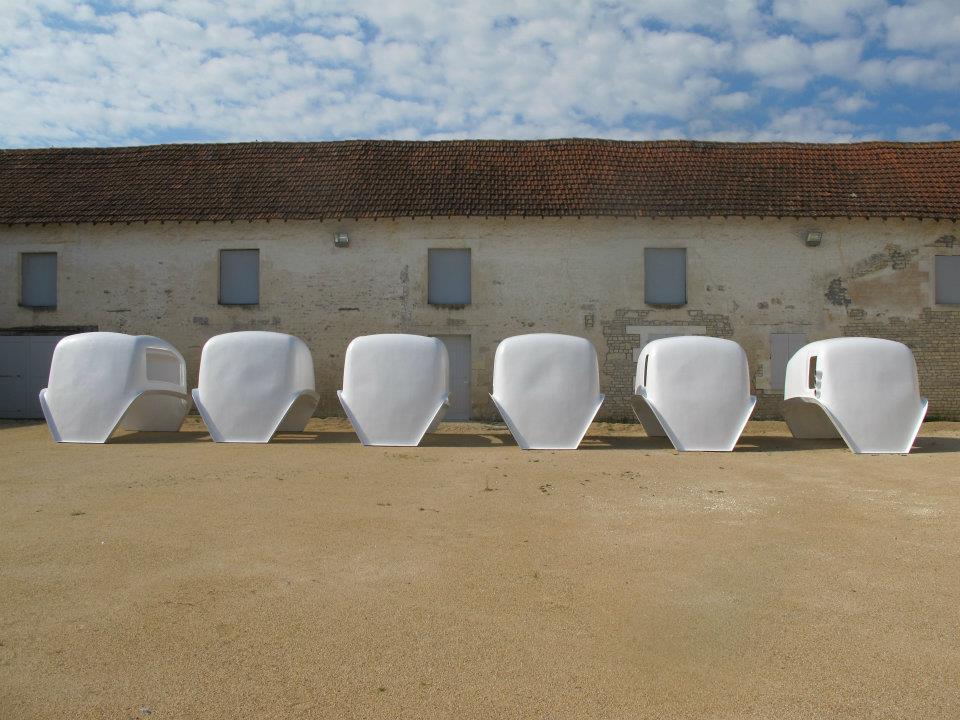 It is a molded plastic house.

Each Bubble element 6 Shells is molded and is constituted by 2 polyester walls, reinforced with a glass fabric with gel coat, between which there is injected an insulating polyurethane foam assayed 40 kg / m3.

It is made up this way :

Detail of the C.P.V profile :

(the boards are taken from one of AQUITAINE PETROLE's patents.)

This construction technique and materials used to provide the envelope of the Bubble 6 Hulls phonic and thermal qualities unmatched. The thermal and sound coefficient is particularly high. K=0,67, which is equivalent to 60cm masonry thickness.
This is the ideal home for all latitudes and all climates, both for winter sports resorts, and for hot countries ranges.

Maintenance is negligible. Reinforced plastic is maintenance and repair eliminates all fees normally charged for a second home.

In fact, 50 years after its creation, it is still often necessary to completely repaint the plastic that tarnished or impossible accumulates layers of grime to clean.

A weighing, reinforced plastic is 2 at 6 times stronger than steel, rot, the bubble 6 shells by the sea will not suffer the attack of sea salt.

It is waterproof, weather-proof : rain, vent, snow.
She is not afraid shocks.

She had a ten-year guarantee. 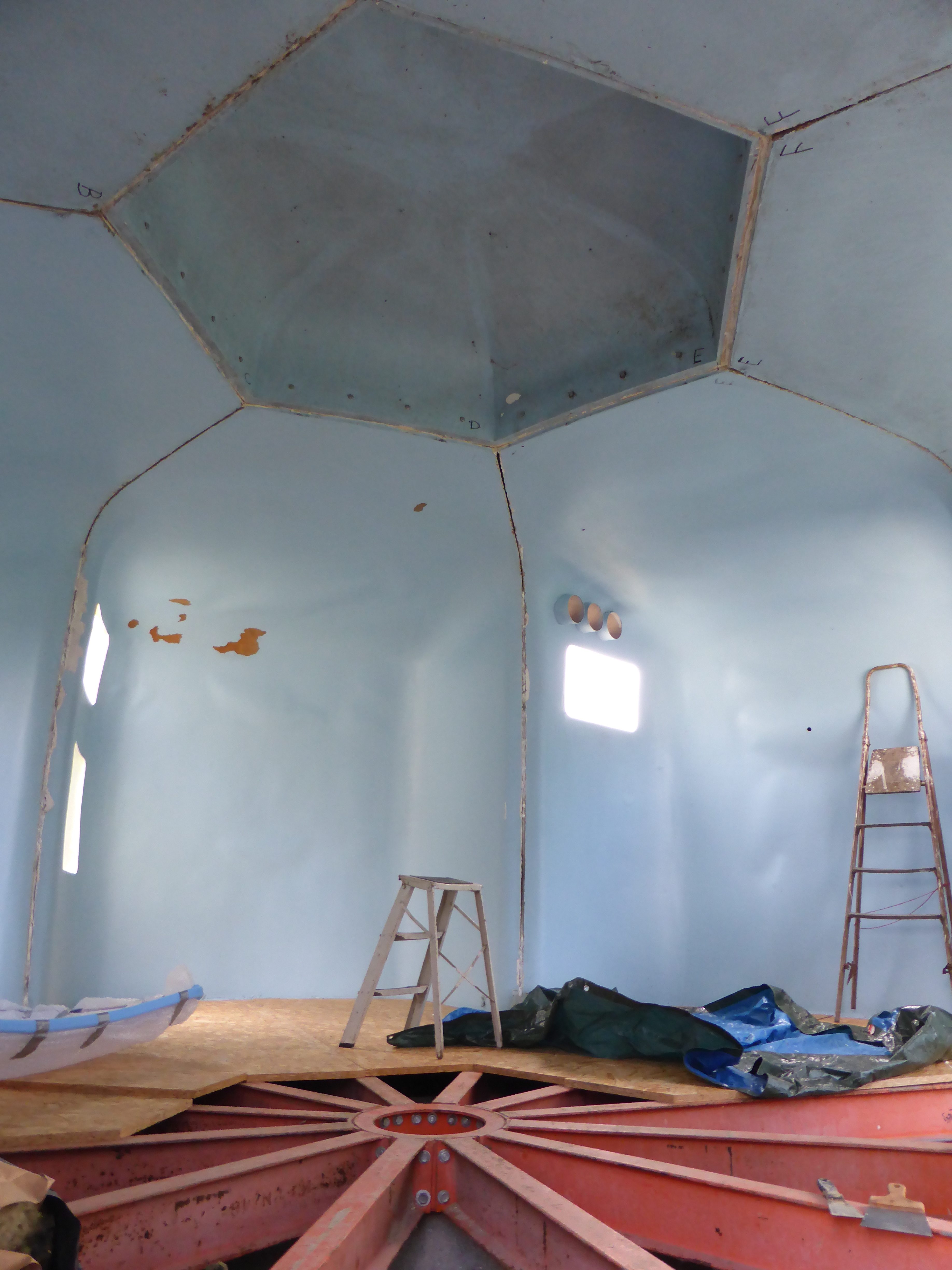 The foundation consists of a hexagonal base masonry on a base slab. This base comprises an access hatch and a louver. It may contain gas cylinders or electric water heater and various piping viability abutting (water, electricity, various evacuations).

The foundation also comprises a metal beam necessary for the central mounting of the frame. The entire door construction about 1 meter of soil.
The bubble is equipped with a metal staircase with one or two ramps, several designs have been made.

A welded metal frame is attached to the foundation, firstly using sealing rods, on the other hand at its central portion on the metal beam. This support consists of IPN 160 assembled by bolting on a central ring braced by cross members IPN 100. The set is painted 2 rustproofing layers, hence its original orange color.

The floor is formed from standard elements, of chipboard 25 mm thick, with the hexagonal central key. It rests on the metal frame and rests on the outer edge of the shells.

All reinforced plastic comprises 6 shells arranged like the petals of a daisy. They are fixed on the metal chassis, screwed on the foundation, but also screwed together and joined at their top by the dome forming keystone.

The assembly of the shells is provided by bolts, with interposition of a sealing profile specially.

The opening of the door is outward, its construction is the same as for the shell. It has specific hinges in stainless steel, providing precise adjustment and equipped with a safety lock. 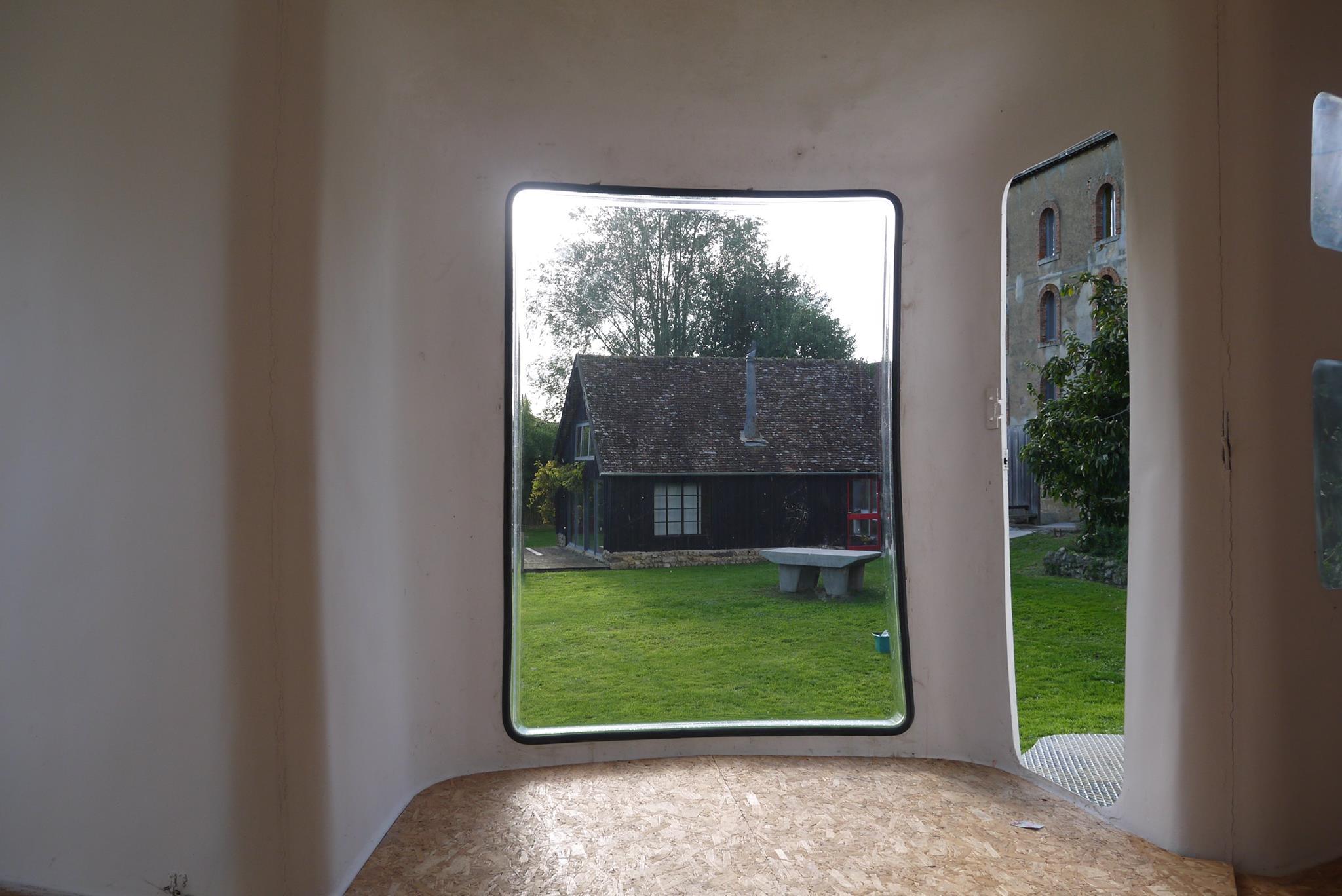 By default, 2 major stationary bays smoked methyl methacrylate are present. They are fixed by profiled aluminum with special gasket, like the old car windshields.

However, this system has a big flaw, over time the cured rubber gasket, Bay no longer in place and ended up falling and often break.

It is now possible to buy new windows, a mold has been recreated, view other articles on the site.

Medium and small bays also equip Bubbles 6 shells, designed as the large bays at first, then as caravan windows years 60, they open with a compass. 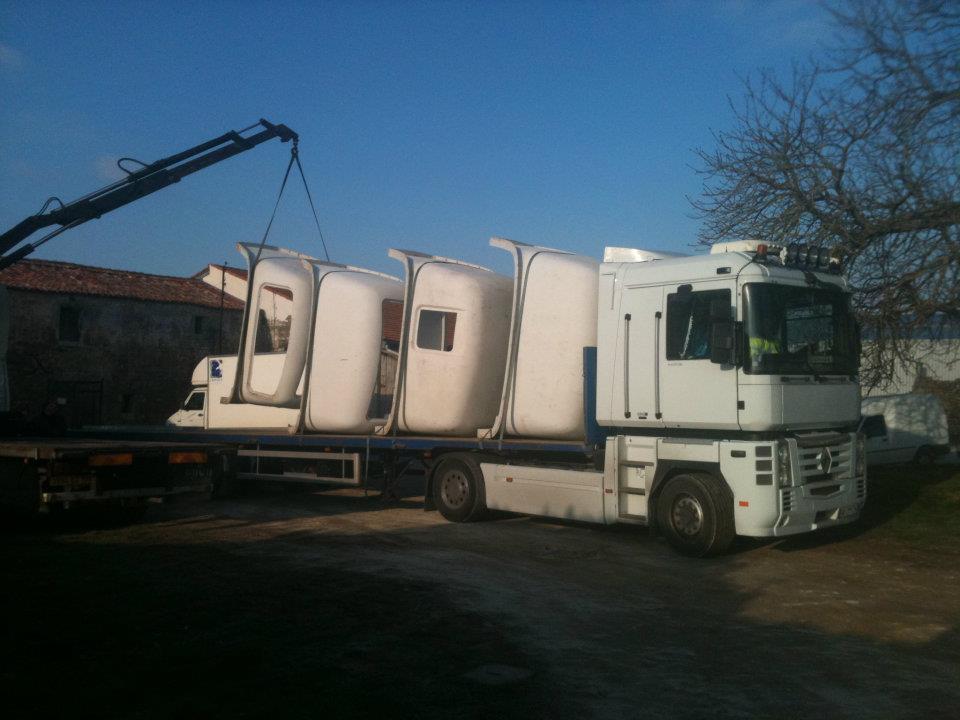 Originally, four hours sufficient to assemble the shells on a previously constructed base.

Designed to size templates of the rail and road, the shells may be transported economically.

On a unit weight of 210 kg, the shells are easily assembled or disassembled with the aid of a lifting device. The set weighs 1516 kg (plastic) for living space 36 m2. 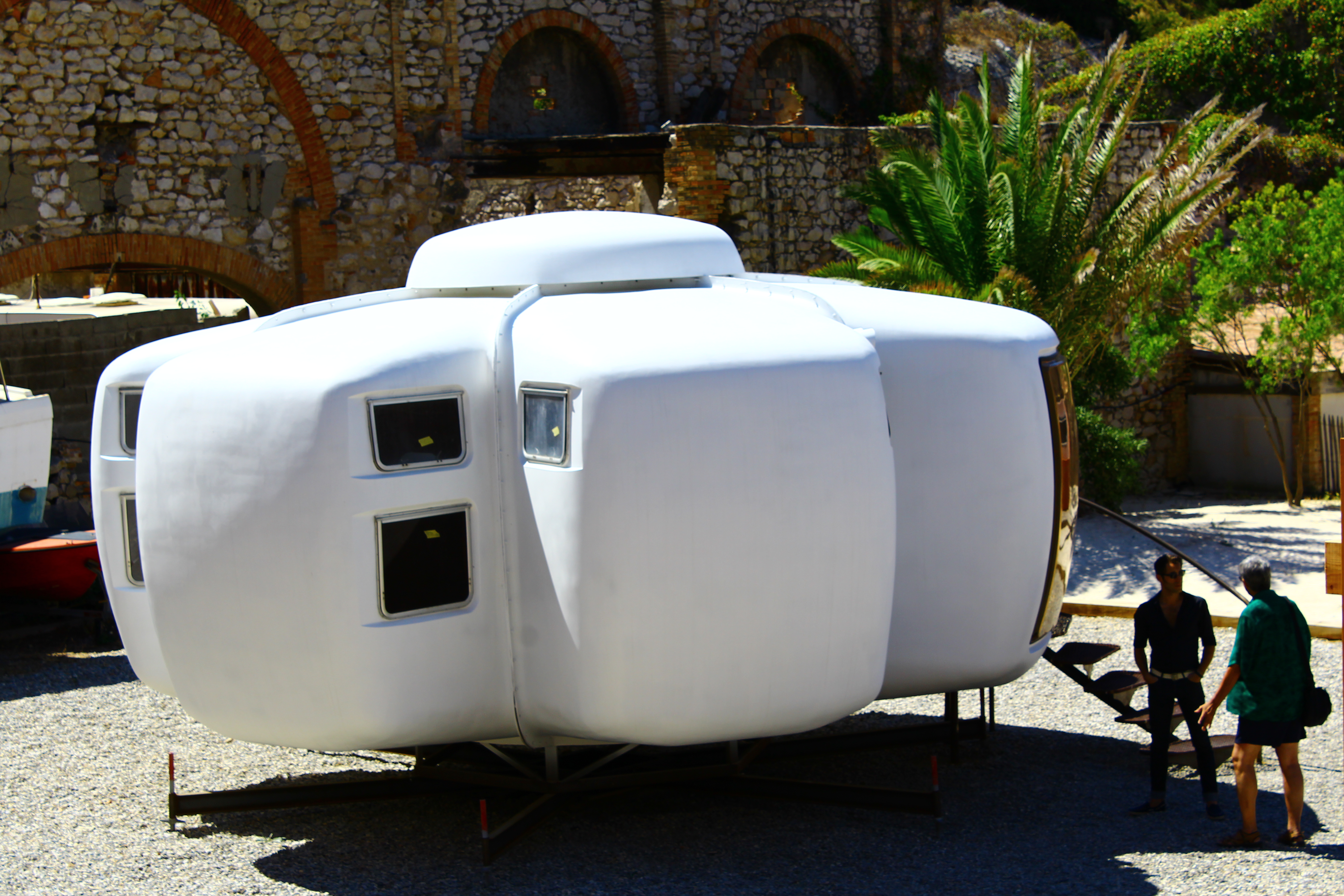 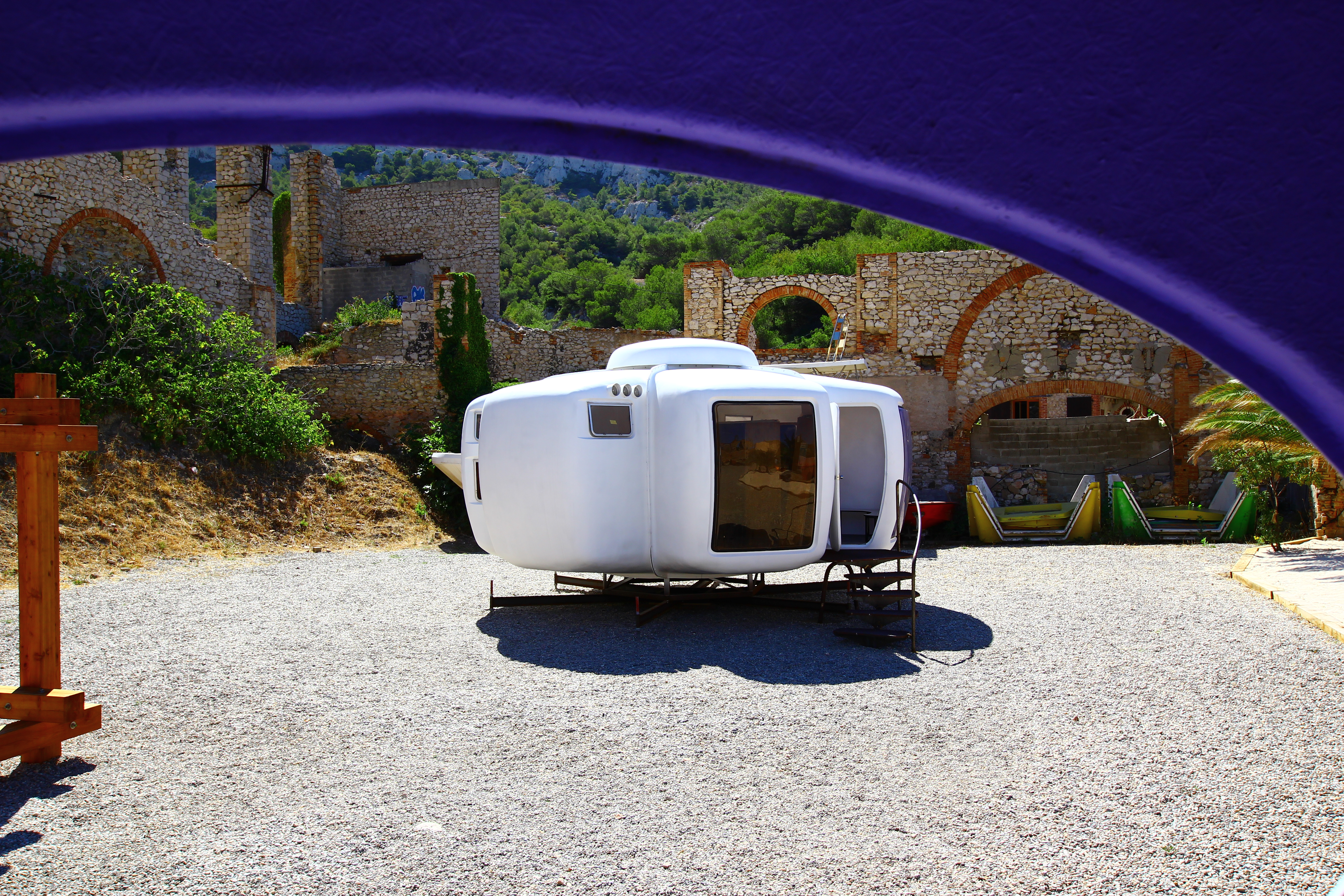 “The building shaped oval or spherical bubble is one of the essential principles of construction in nature : fruits, air bubbles, biological organs, etc.
The angle is a human invention to meet certain now outdated techniques.
Nowadays, the technique emerges from the abstract mathematical design and approaching forms of organic life, it must serve as directly as men.”

Also in order to restore the truths, Here are the records that John Benjamin Maneval was made to be aware of the existing and who probably influenced these technical choices : 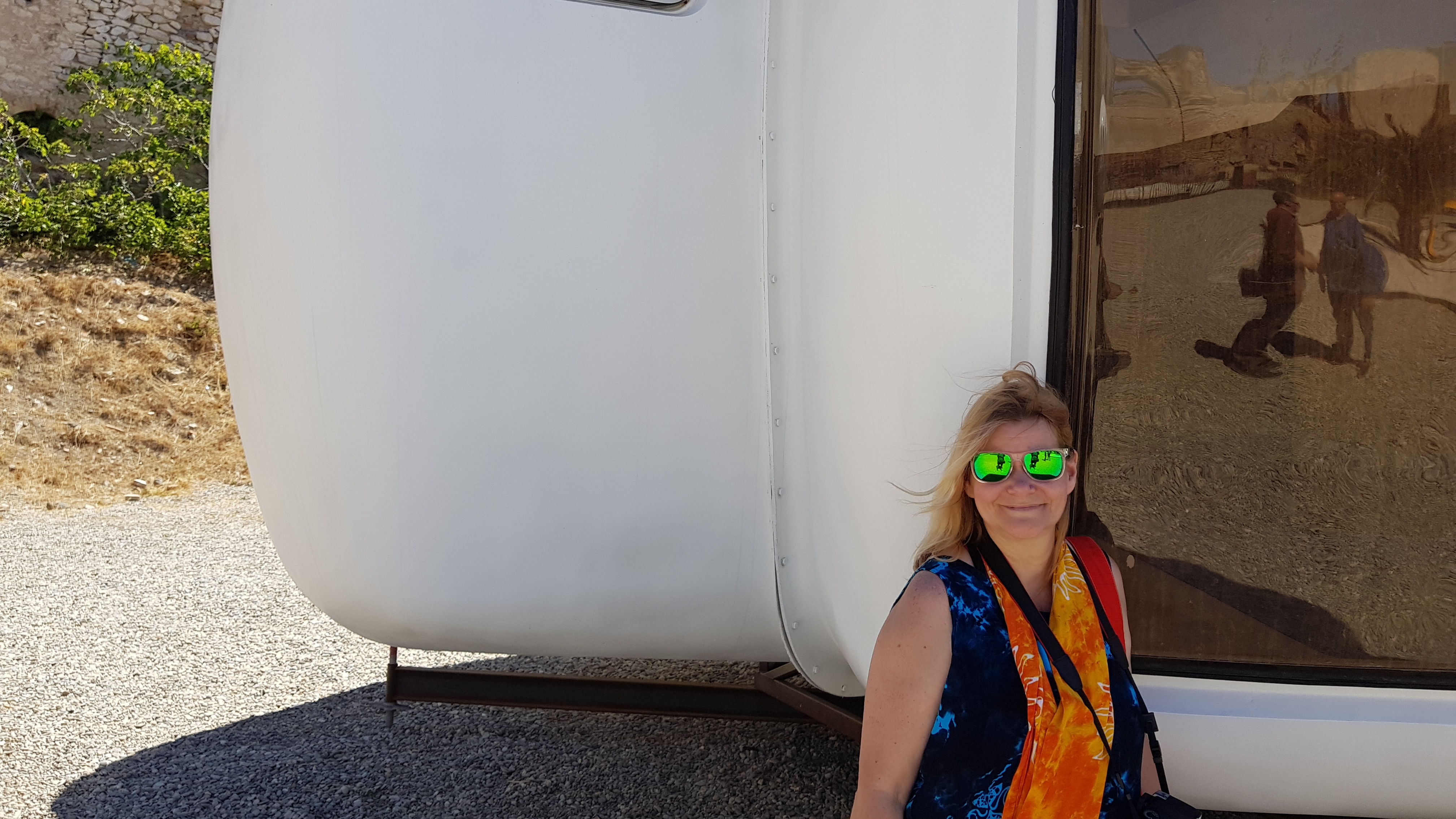 Founder of mm2 France, oto6, then from Sixmania. The 6 wheels and more have always been a passion for me. It started in 1980 thanks to a certain Christian de Léotard, you know ? Find me on my site sixmania.fr