The Bond Bug is the last automobile produced under the Bond Cars Limited name after its acquisition by the British manufacturer Reliant.

made of 1970 -1974
This two-seater coupe with three wheels polyester sports a typical design for years 70 : line corner or “wedge”, signed by Tom Karen of Ogle Design.

The prototype was built on a new chassis design and the mechanical base of the Reliant Regal.

History :
Bond is the automotive branch of & rsquo; an industrial conglomerate named Loxhams and Bradshaw Group. In 1968, when it was bought by the Dutton Foreshaw group, Bond brand is excluded from the transaction. After a takeover attempt by its employees, Bond will become the property of the British automaker Reliant. Reliant Bond decides to position as a premium brand and creates a specific car in this category : la Bond-Bug.

At its output, the Bond Bug is presented as a future means of transport and a great success d & rsquo; believes. compact, Sport Nation, it targets a younger clientele than the cars in traditional three wheels. Its high price (629 £) However, the competition sets with classic cars much more functional : Mini, Lotus Super Seven..

Production :
Almost all models of the Bond Bug are color Mandarine, only color offered by the manufacturer, to & rsquo; except for some advertising vehicles. All models will be produced with the steering wheel on the right, because the bug was only for the domestic market of the United Kingdom. 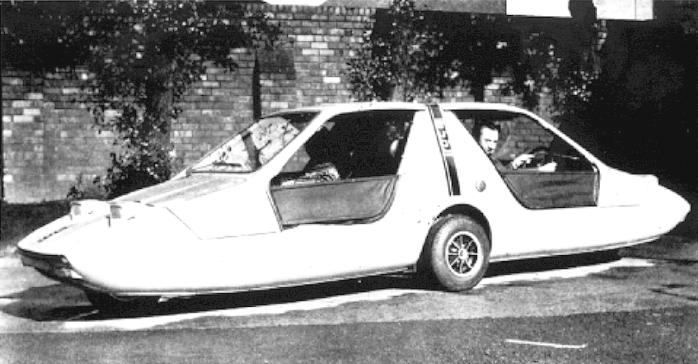 The Bond Bug will be produced 2268 copies, distributed :

And a copy of & rsquo; a prototype 4 wheels.

La Bond Bug 700 was to be the base model :
It was to be sold stripped of all luxury. The side panels were optional.
E models were versions Deluxe :
They had among other panels and side windows series, d & rsquo; a heater, d & rsquo; a door lock and d & rsquo; interior lighting.
ES models (S for Sport) :
had the same elements as the E series, but with the addition of aluminum rims, a spare wheel, a higher compression ratio and d & rsquo; other extras such that & rsquo; a sportier steering wheel.

Technique :
The alloy engine 700 cm3 is mounted longitudinally in & rsquo; before the & rsquo; auto, between the two passengers legs. The rear-wheel drive s & rsquo; exerts a box 4 synchromesh. The mechanical product 22 kW / 29 hp on models 700 and 700E, while the top model, the 700ES, proposes a modified cylinder head and a higher compression ratio delivering power 23 kW 31 ch.
Copies of the final year of production 1974 will be equipped d & rsquo; a 750 cm3 derived from the Reliant Robin, offering more torque and power, which passes 34hp.

WITH THE WHOLE TOP GEAR TEAM

The car of the time of the years 1970 had been modified for water travel with a powerful jet ski and retractable wheels and helped the host break speed for the ” unlimited amphibious experimental class ” This is why Jeremy, Richard and James will try again to create an amphibious car, but this time the goals have become much more serious
– They will set off to set a world water speed record.
Coniston, The Grand Tour's Jeremy Clarkson sets a new speed record in the Bond Bug car on November 1 2017.

VINTAGE SKIDOO BLAZER GEHL (1970-1971)
All Seasons : for its Interchangeable Tracked Vehicles and/or Skis

This adaptable Skidoo snowmobile could change its skis to wheels for the summer dune buggy. Upholstered bucket seats with gear selector on the center console perhaps were the "first more comfortable alongside snowmobile". It reached speeds of up & rsquo; to 65 miles / h on land and 5 miles / h on & rsquo; water.