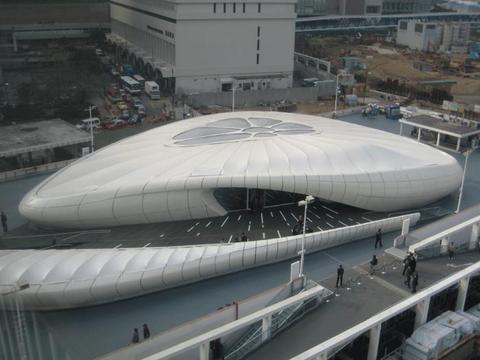 Chanel quilted handbag is a classic creation, it will be updated at a recent Chanel Mobile Art International Art Exhibition of the protagonist, about 20 well known artists from around the world of creativity, in different forms and gives new life to handbags. The exhibition will set up a mobile shop around the parade show, designed by renowned architect Zaha Hadid by, blanc, full curve and streamlined beauty, showing the nomadic style.

Designed for Chanel, the pavilion has traveled the world, in Hong Kong, in Tokyo and New York until his last stop at the Institut du Monde Arabe in Paris. 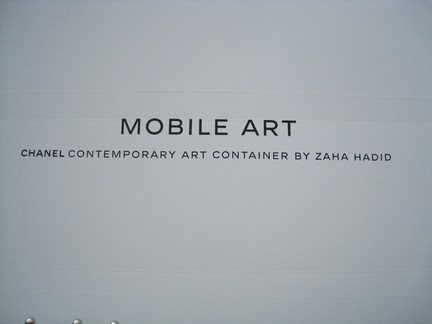 Alan Brookes architect in his book 1985 Cladding of buildings, says one of the advantages of polymer composites is that they can be made by unskilled labor. However, experience has proved this wrong. The key to successful manufacturing in polymer composites is qualified agents and specific quality procedures.

Stage One, the module manufacturer, gives each mold and constituting a single reference which allows it to be followed. He also held materials lots of records and a sample of each laminate layer. This pavilion proved to be a challenge, but its quality control systems have been able to handle comfortably.

Before the flag was shipped in the first place, Hong Kong, a test was undertaken together with the work of the first step in Tockwith, North Yorkshire. This included the erection of the complete steel frame and 50% sheath FRP. This was considered sufficient to test the accuracy and constructability of FRP panels. Once dismantled, The components were then shipped using a combination of sea and air freight, subsequent trips were the only sea. Thanks to 24 Pavilion hours was erected in Hong Kong in just four weeks.

Work pavilion hosted by 20 international artists, dont Tabaimo, Lee Bul and Leandro Erlich all inspired by Chanel quilted handbag strap chain, that appeared in 1955 and was reissued in 2005 by fashion designer Karl Lagerfeld. The pavilion is a spiral flowing space. This is a custom space travel and cleverly designed, a redefinition of dance around the bag to main.La global financial crisis has made the tour of the world waiting pavilion, however, and is currently stored in the United Kingdom. 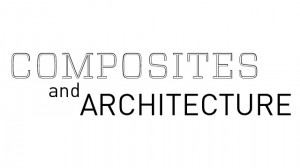 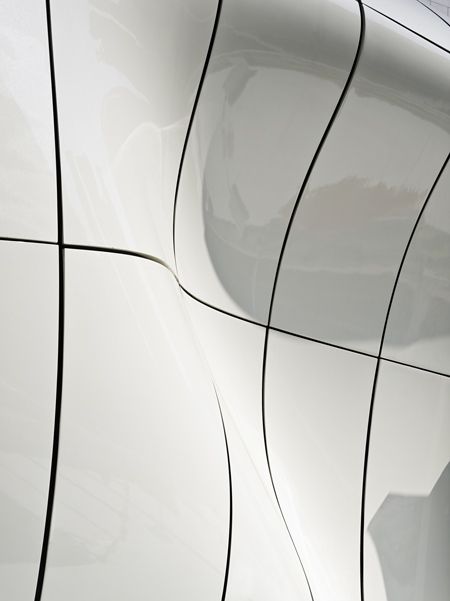 The Mobile Art Pavilion for Chanel, First inspired by the Chanel quilted bag signed and designed by a natural organization system, is also shaped by functional considerations of exposure. However, these new determinations are secondary precarious and dependent on the dominant official language Pavilion. An enigmatic strangeness has evolved between the organic system logic Pavilion and these functional adaptations – sparking the curiosity of visitors even further.

In creating the Mobile Art Pavilion for Chanel, Zaha Hadid has developed the fluid geometries of natural systems in a continuum of fluid and dynamic space – where the opposition between outside and inside, light and dark landscapes, natural and artificial are synthesized. The energy lines converging in the Pavilion, continually redefine the quality of each exhibition space, while guiding the movement through the exhibition. The work of the selected artists was commissioned for the exhibition. Hadid has created an entire landscape for their work, rather than just an exhibition space. Visitors will be guided through space using the latest digital technology developed in collaboration with artists.

“The fascination of the Mobile Art Pavilion is the challenge of translating the intellectual and physical into the sensual – experiment with completely unexpected and totally immersive environments for this global celebration of the iconic work of Chanel. I see the flag as a kind of total artwork that continually reinvents itself as it moves to Asia, the US and Europe “, says Zaha Hadid. 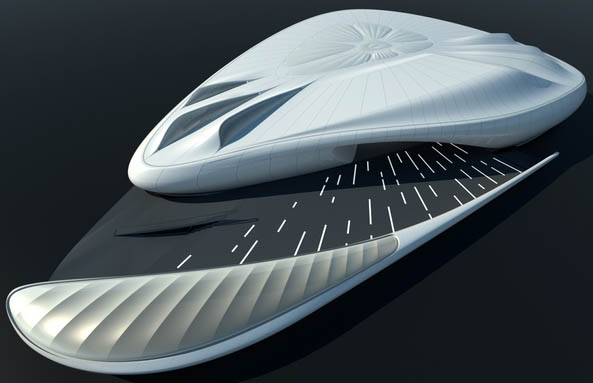 "The pavilion is not composed of repeated elements, but declined, says Zaha Hadid. The digital image software and construction techniques made possible entirely organic forms, instead of these repetitive series that characterize the architecture of the twentieth century industrial. "The architect project manager, Thomas Vietzske, specifies the technical details.

"This is a scale prototype 1, says he, made of 700 unique pieces that ultimately create a continuous surface between facade and roof. Sandwich panels (3 cm thick), attached to metal arches, have an outer layer of reinforced plastic fiber-based (FRP), tinted cream. roof, zenith windows arranged above the patio and to the ends of the project consist of air cushions with translucent ETFE membrane (ethyl tetra ethylene fluorine). "Three weeks will be required for assembly of some 180 tons of the structure (29m x 45m, 6 m maximum height), and only two for the reverse. The size of these structural elements is limited to 2,25 m wide as they will travel city to city within containers (56 in total). 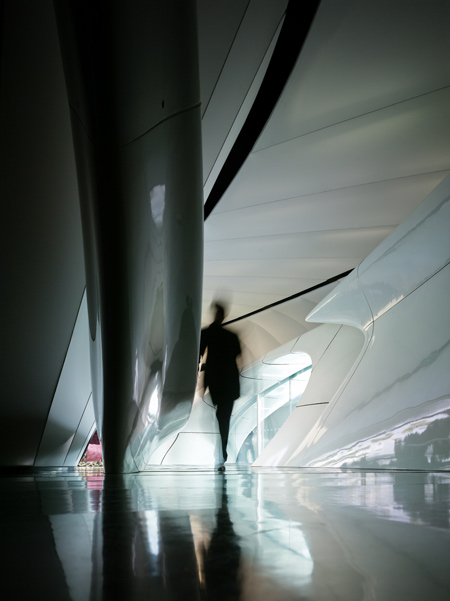 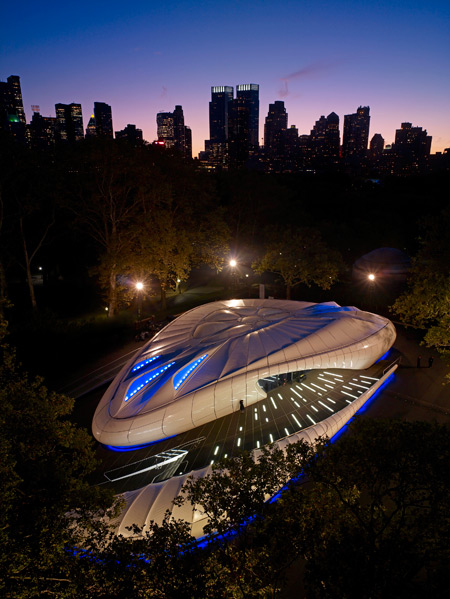 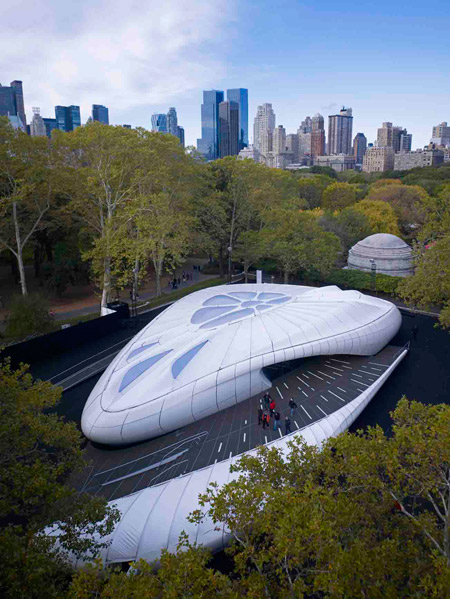 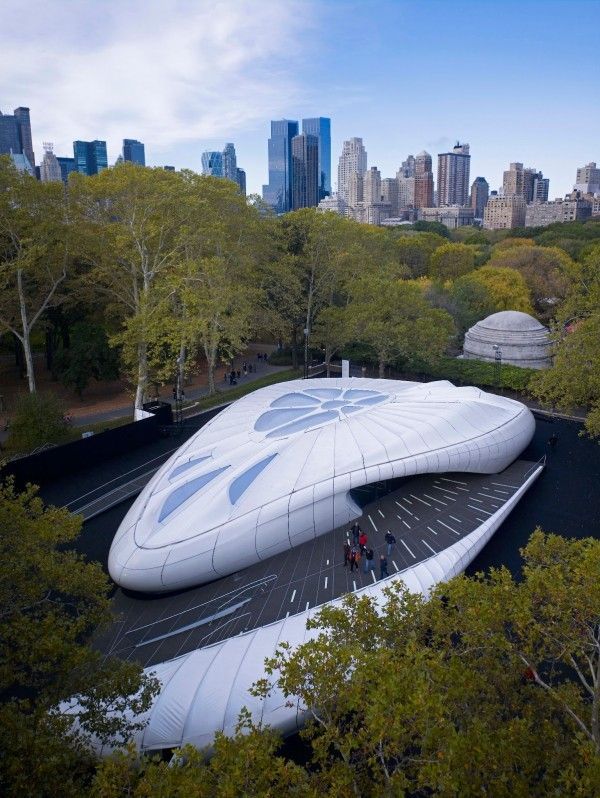 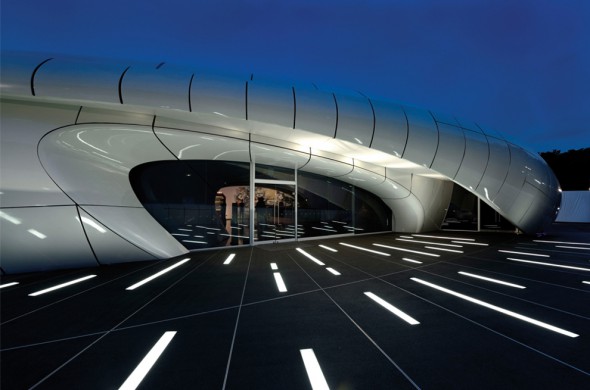 The pavilion has a toroidal shape wrapped around a central courtyard daylit, but it is not optimized geometry for repetitive geometric elements, the shape of the pavilion was explored and delineated by architects. Visitors are invited to enjoy, even enjoy the geometrical accuracy provided by the FRP coating supported by a frame internally steel and also curvilinear. The central courtyard is daylit through ETFE cushions, which were considered as FRP tourable by architects.

FRP panels for Chanel pavilion are detailed as rainscreen with sealing and insulation provided by a general construction as invisible. Wall panels vary in size and are approximately 1.5mx 2m while the roof panels are 2m x 4m. The panels were designed by Optima Project using FEA optimized laminate construction elements, while achieving the required rigidity by the performance specification for the most exposed place. The panels are reinforced with glass fibers in combination of biaxial stitched fabric and mat son cut. The glass fibers are maintained in a fire retardant polyester resin matrix. The panels have a sandwich construction with a core of 5 mm thick low density, mat nonwoven filament yarn containing microbeads (tiny plastic balls) to obtain a rigidity high bending to weight ratio.

FRP panels can be easily detailed to provide a high level of thermal insulation.

FRP panels are sprayed with white acrylic paint high gloss pearlescent. This gloss is visually demanding, revealing the geometry of each panel of FRP and the precision with which it was made. The individual molds for each panel are CNC machined polyurethane foam, a cost effective molding material. The panels were sanded by hand after being removed from the mold for the fine finish. The lining inside the pavilion is mainly formed of FRP panels that were a fire class in accordance with British Standard 476, part 7.

Tokyo The Pavilion of Zaha Hadid.. 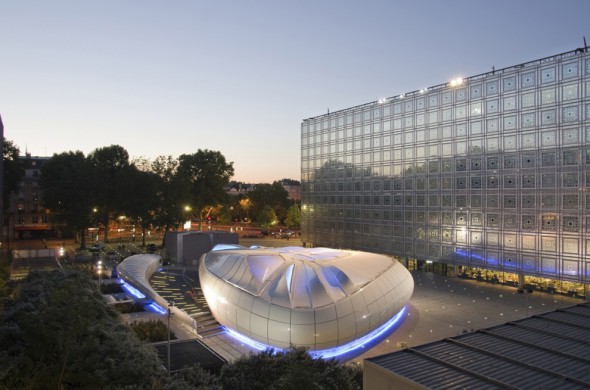 The Institute of the Arab world welcomes in the summer Chanel Mobile Pavilion, a work of Zaha Hadid, an Anglo-Iraqi architect whose futuristic achievements on 5 continents are emblematic of the architecture of the 21st century will not be “Euclidean” (based on straight lines and right angles) but the nature image, with curved shapes, fluid and harmonious.

beginning 2011, a new pavilion will take place on the forecourt of the Institut du Monde Arabe in 75005 Paris (fifth district).

The Institute designed by Jean Nouvel and Architecture Studio was inaugurated in 1987 to improve diplomatic relations between France and the Arab countries.

The new pavilion which will take place in the center of the courtyard of the building is funded by the Chanel house, who entrusted the architectural design to the famous Zaha Hadid. Inside, you can experience up 30 October 1st expo devoted to the creations of Zaha Hadid. This pavilion was commissioned by Chanel fashion house for traveling exhibitions. Established in June 2007, Chanel Mobile Pavilion has been previously installed in New York, The Angels, London, Moscow, Hong Kong et Tokyo. Chanel has now donated it to the Institut du monde arabe where it responds wonderfully to the building Jean Nouvel. 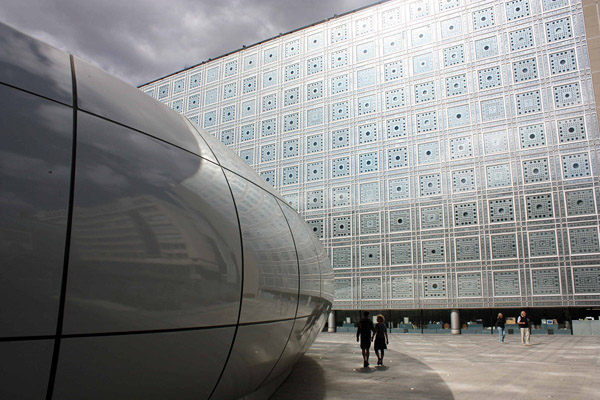 « Mobile Art », temporary structure 720 m2 designed for the haute couture house with "C" intertwined by the winner of the Pritzker Prize 2004, will settle on the forecourt IMA which will be presented contemporary Arab creation. In 2008, this traveling exhibition pavilion 720 m2, where were presented the works of contemporary artists speaking about the values ​​of the Chanel bag, began its world tour : Hong Kong, Tokyo, then New York.

The 13 October 2010, Chanel communicates the will of the IMA to host the temporary pavilion. In order to "sustain this work conceived by one of the greatest contemporary architects" , the fashion house announced his "donation" to the IMA. "This is the beginning of the year 2011 this pavilion will be located on the forecourt of the Arab World Institute, Chanel says, amidst a unique architectural environment and as part of a prestigious cultural institution and accessible to all in the heart of Paris. Since then, the Institute will continue policy oriented exhibitions to contemporary creation in relationship with Arab countries. » 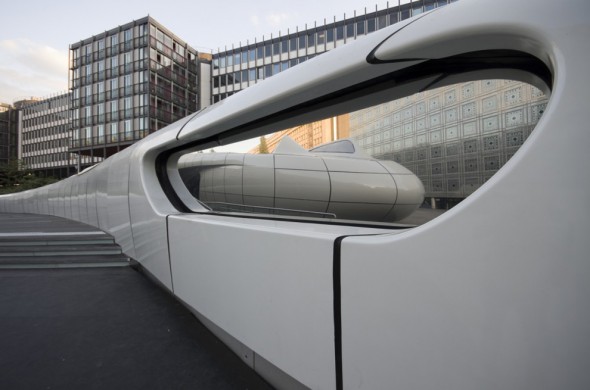 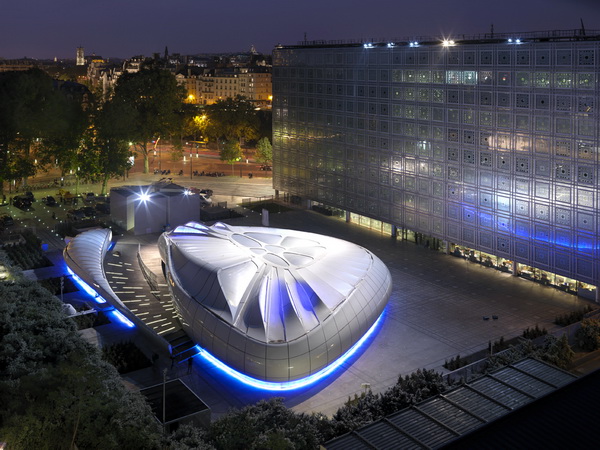 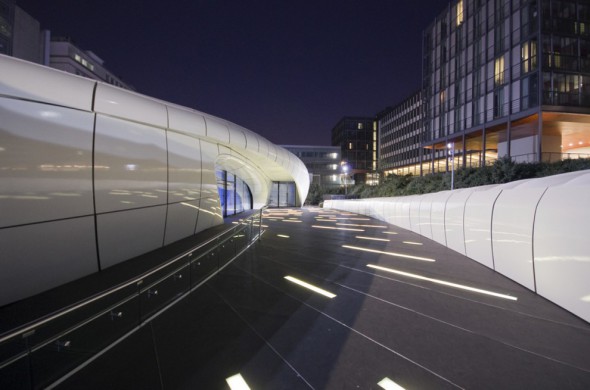 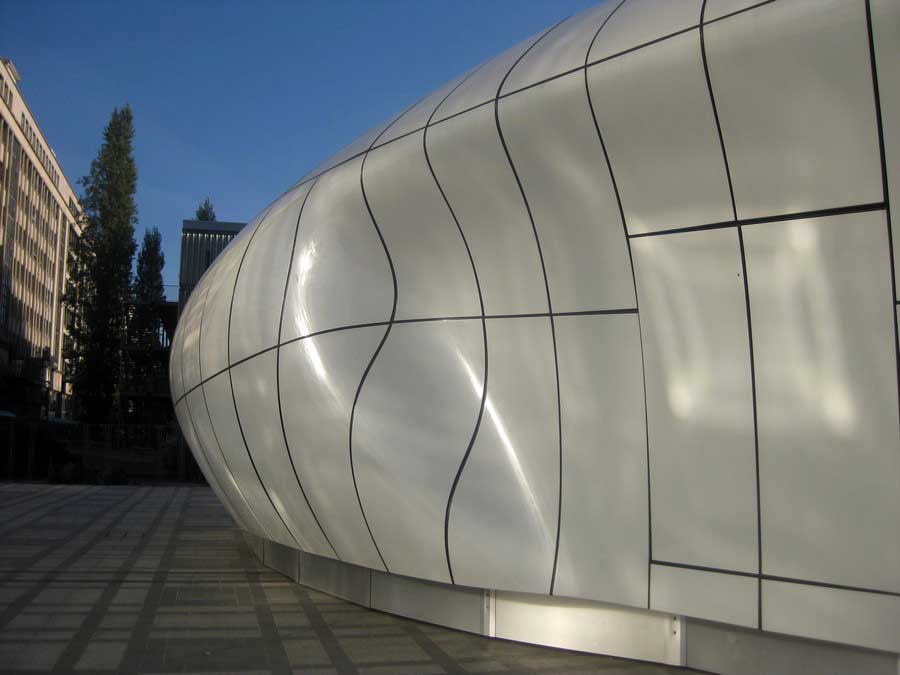 Architects Zaha Hadid and Patrik Schumacher have designed a dining pavilion clamshell open clam. The team Hadid and Schumacher used the design calculation to create the pavilion, which is constructed from laser-cut and perforated steel surfaces, sections aluminum vessel and loops wood. “Defined by numerical methods, the flag has been designed so that its components are, at most, only curve ", said the London-based practice. Volu seems to be made from one continuous piece, and has an oval roof that slopes down on diners, like a mushroom cap. The skeleton of the structure houses 3,2 meters high irregularly shaped sections that form a pattern on the roof and the support shaft cut-out. The pattern is repeated in the floor of the pavilion 20 square meters, although the gaps were filled with wooden boards. “Composed of a series of collection band structure in the backbone and expansion overheads, structuring flag is guided by the various structural conditions of loading ", said the practice in a statement. "Through the analysis of the geometry under load, the structure and the flag of the skin have been digitally optimized to remove unnecessary materials, which results in the lightest possible solution – following an organic structural logic that recreates many of the same principles found in nature.” The structure houses a circular dining table in wood, accompanied by three curved benches that can accommodate up to ten guests. The piece was commissioned by the developer Robbie Antonio to its current project of revolution , inviting international architects and designers to create prefabricated living spaces.

Alice Morby – 5 October 2016
A “data center” provided the backdrop for Chanel's spring summer 2017 spectacle, which included models dressed as robots and bags with flashing LED displays. The Chanel show was held at the Grand Palais in Paris yesterday. creative director Karl Lagerfeld, who is known for creating elaborate sets, transformed the historic site in Chanel data center. The colors observed in the wiring were repeated in the collection, they were applied to the digital printing and signing Chanel tweed. Accessories included brightly colored baseball caps, shaped bags and clutches with robots monochrome LED display . “The robot – which is my idea of ​​the most iconic jacket of the issue on a creature of an unknown future meaning Chanel's timeless ", said Lagerfeld. Chanel penchant for elaborate design is not unique in its parades sets. For a store in Amsterdam, Brand joined Dutch firm MVRDV to replace a traditional façade with glass bricks that are "stronger than concrete”.

Art in the city..In the future, cities might be more colorful and more challenging. Give more room to art, to fantasy and creativity could change the face of our cities, as with the Burnham Pavilion, a creation of Zaha Hadid in Millennium Park in Chicago… 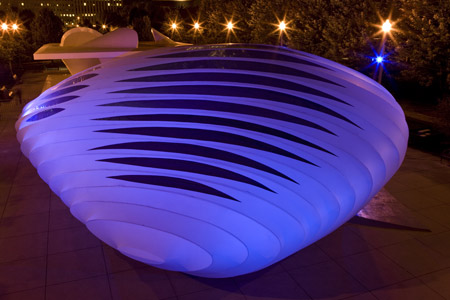 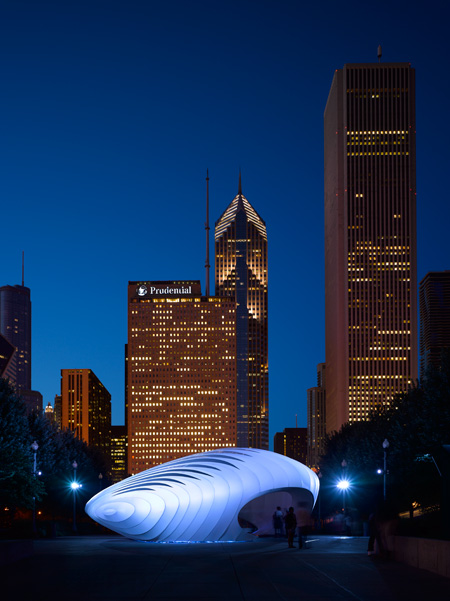 added 15 sept. 2014
This film shows some – Some people and Zaha Hadid Architects projects.
It aims to convey the ideas and ambitions behind our work. Some of our academic research design, with students and the AADRL’ Vienna University of Applied Arts, is also presented.