Ephraim Henry Pavie, born in Paris on 29 January 1947, was a French architect. He alternately carried out in France and the US, then in Israel. Initially known as Henry Pavia, he adds the name Ephraim during its conversion to Judaism 1982. It is characterized by a marked tendency to design structures in thin concrete veil, whose forms in double bends are free and slender.

Its architecture initially inspired by organic architecture and shells evolves towards Biomorphism and Neo-futurism, enrolling, before the time of computers and CAD, in the current of Blob architecture.

Biography Henry Pavie enters the National School of Fine Arts in Paris (ENSBA) in 1967, in the workshop of Guillaume Gillet former grand architectural Prix de Rome. Gillet refuse to note his sketches because of the improper aspect of his architectural vocabulary that resembles the hulls assemblies. He continued his university studies in UP6 (one of the educational architectural units set up by André Malraux. 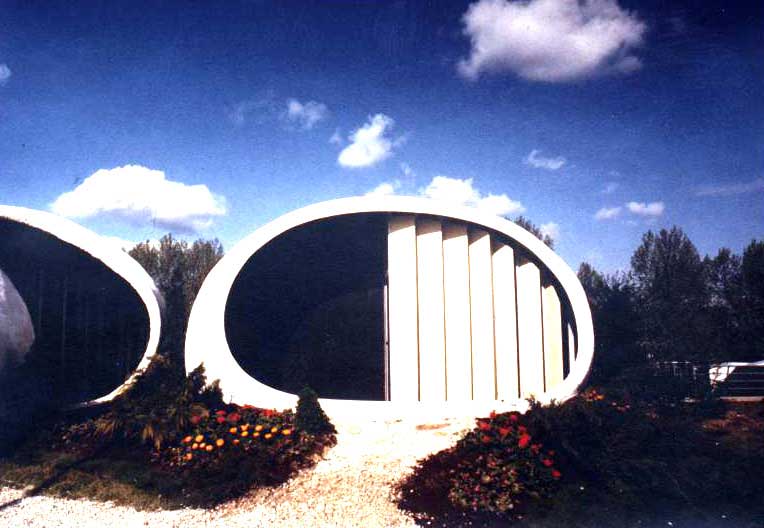 motel cell carried out a day before the press by Henry Pavia. Bulle plaster projected on inflatable formwork. Paris fair (1974). 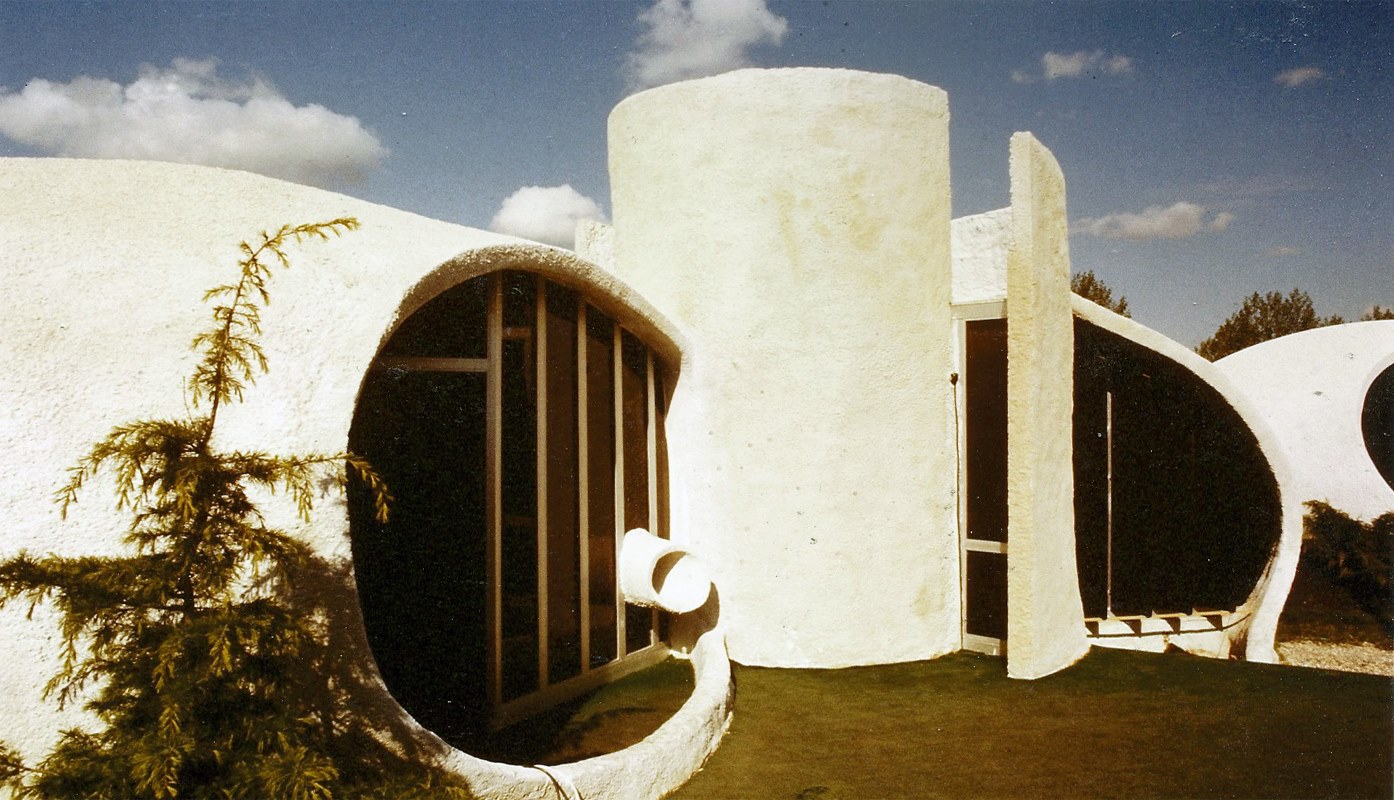 The house facing the Mediterranean Sea from its 1000 meters high. Method panoramic picture windows were shaped like incredible sunglasses overlooking the sea.
NURBS surfaces as glazzing provide ideal support for mounting the brands new types of transparent solar cells. Electricity generated by such an area of ​​PV-Cells units must be converted into hydrogen (Electrolysis by a process of self water – powered) and compressed into containers for later use. This zero-emission pilot project includes the development of a PEM-Fuel Cell Hydrogen-powered generator, providing electricity while the only ones “emissions” are reusable heat and’ pure water. 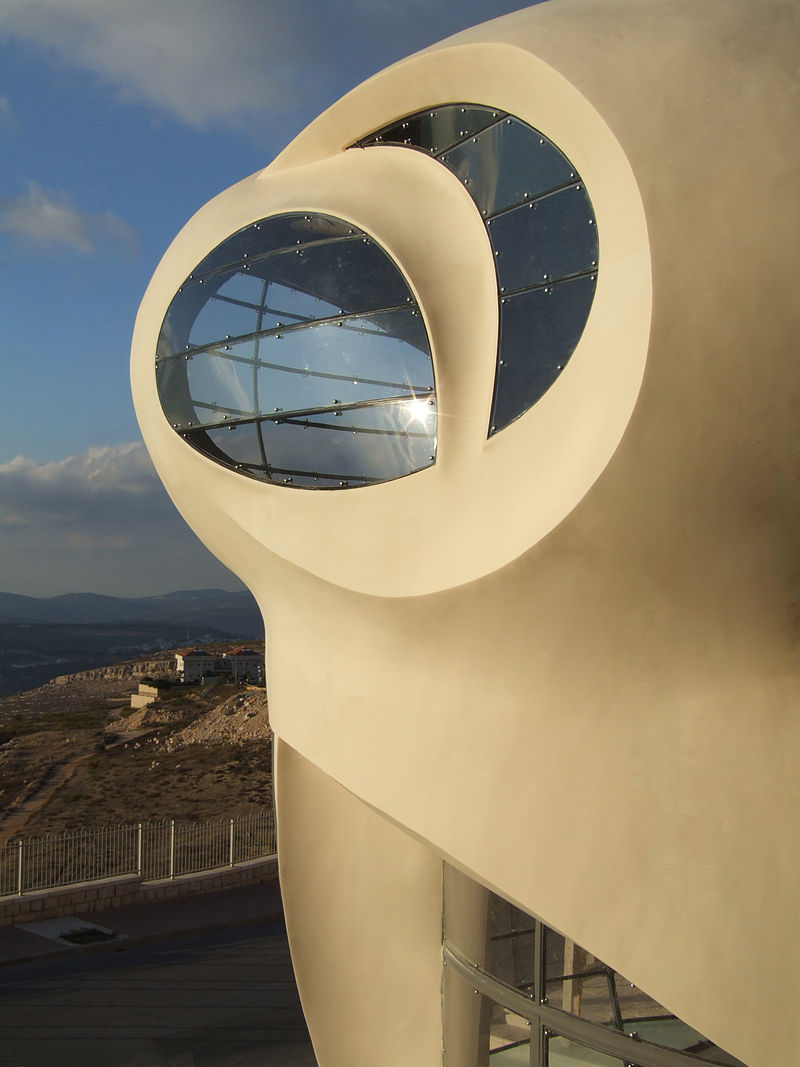 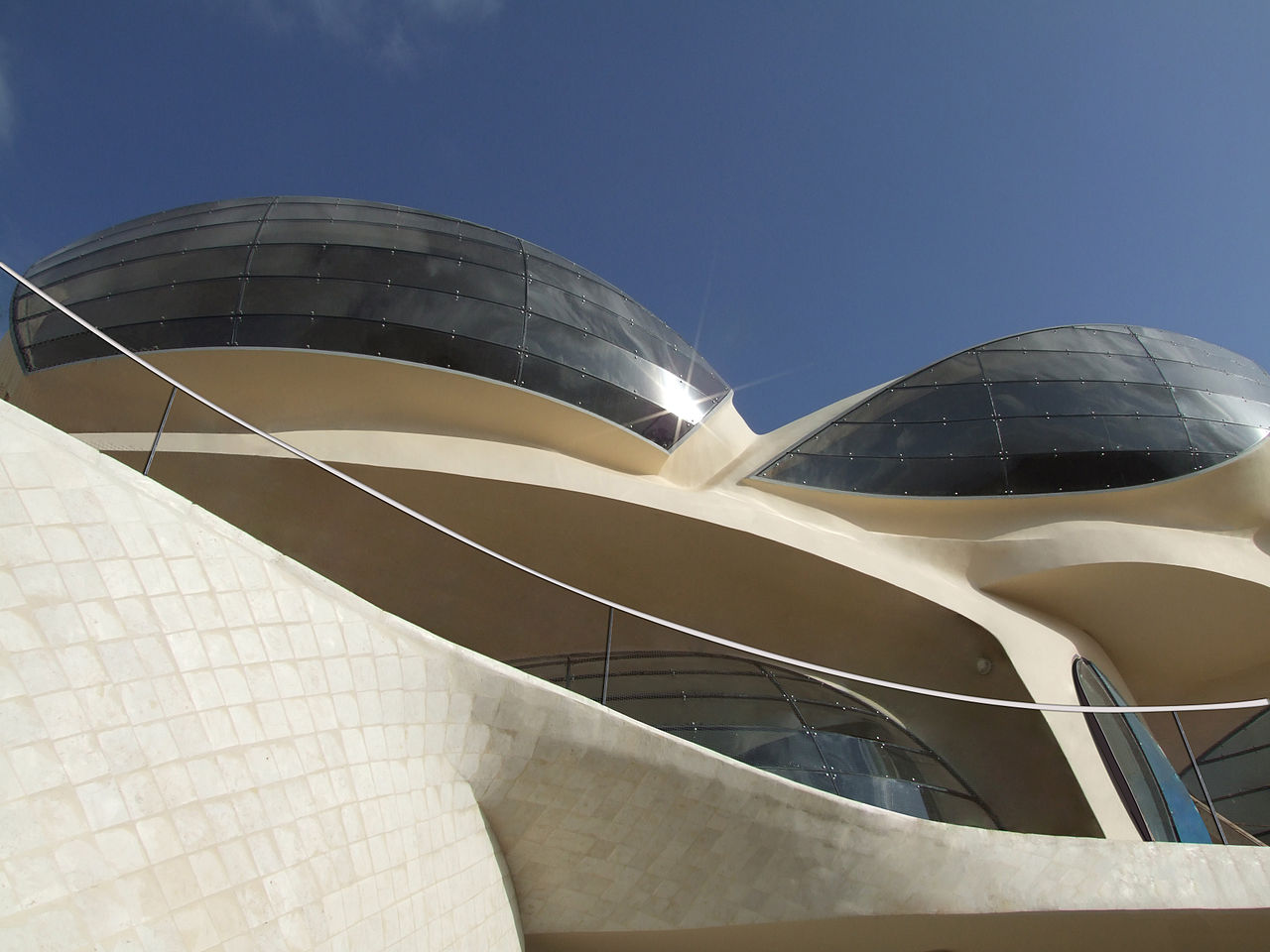 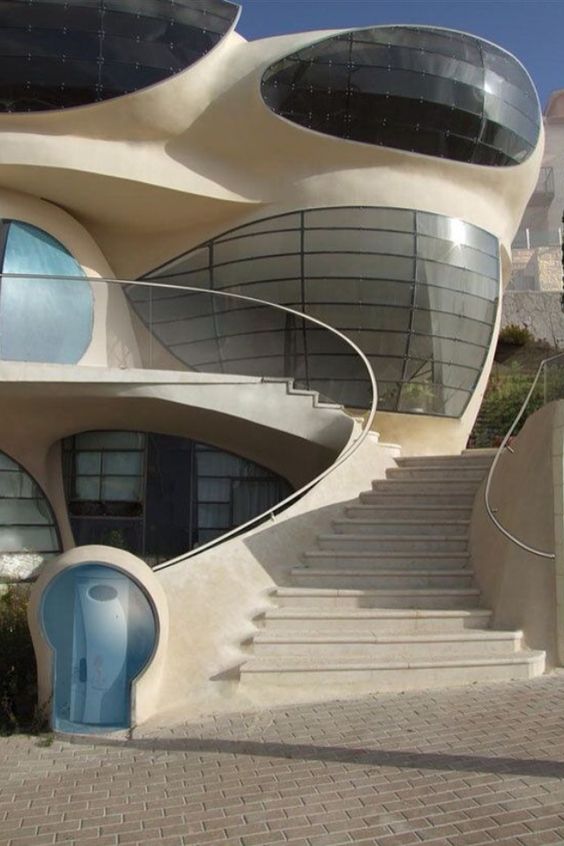 The main feature of the method is to construct in contrast to usual methods : the tire casing serves as a mold, Negative exact volumes to build. Prior to the implementation of materials, operators set on this mold inflatable elements intended to be incorporated in future wall (electrical boxes, recovery ducts and pipes of various cables, Pre-door frames and windows, seals of blister assemblies, expansion joints, coffered cabinets and niches, furniture embedded in the walls). The projection of the materials constituting the structure thus made starting with which serve as inner coating, followed by an insulating layer (polyurethane foam, polystyrene parts, Straw, cork block, vermiculite aggregate, etc.). Structural reinforcements (reinforcement, Timber frame etc ..) are then positioned on the spacers so as to be incorporated in the layer of structural material (concrete, gunite, plaster, polymers…). After drying of all applying the sealing material (sealant, sika or derivatives, resin reinforced with fiberglass or carbon or vegetable fibers, etc.), then finally the outer cladding materials (pierre, ceramic, coating, painting, etc.) When the implementation process is completed, inflatable formwork is drained of air and collapses, discovering walls whose surface appearance is an exact replica of the membrane constitutes the mold, requiring only very little finishing.

In spring 1974 – As part of the Village of France in the Paris Fair, after a first crushing defeat, they realize in one day house a plaster-bubble projected on inflatable formwork. The "feat" is mentioned in one of many daily France. The following day they add the construction of a more complex house made of concrete thin veil, projected on pneumatic formwork.

At the end of 1974 while it is still only in architecture diplômable, Pavia Henry interrupted his studies and decided to follow his partner in the project of emigration to the United States, at Miami. They then work together there to renovate several hotels in Miami Beach, and several construction projects, including a building on inflatable formwork in Hialeah and a floating home in Indian Creek. Henry Pavia conceives and designs 35 years in advance, a twisted tower project that is presented to the company Hyatt Hotels, but then the project is denied, considered unrealistic. Since the advent of 3D computer-aided architecture, concept has been widely used by many architects in the world (Turning Torso, Twist Tower de Dubai, International Business Center Moscow and other). 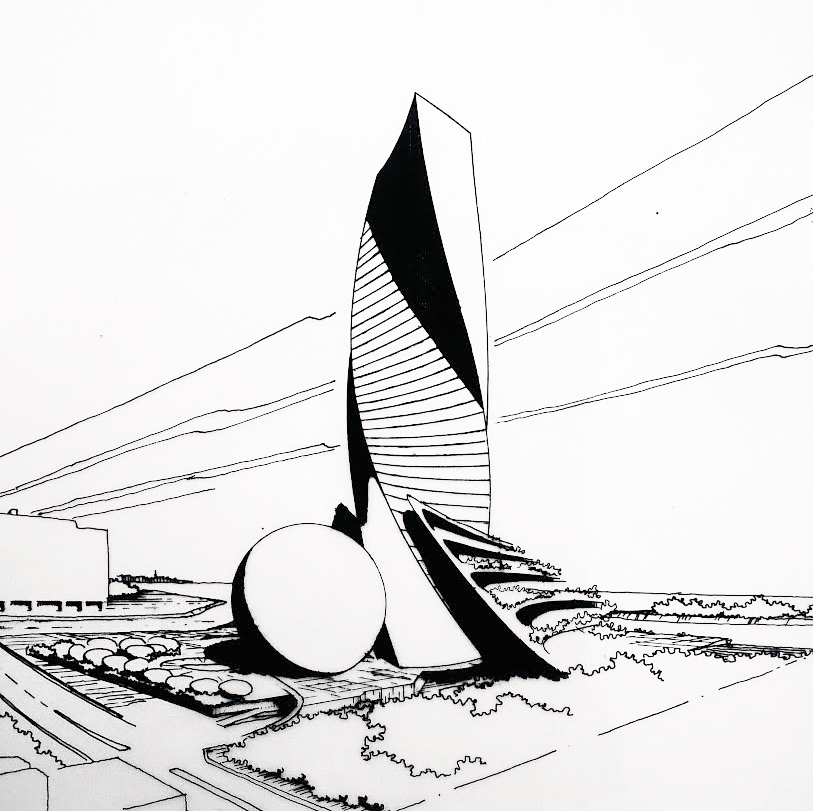 In 1970, his meeting with John Lasry creator of Tekki (sports club now disappeared, made in Paris rue de Sèvres by architect Pascal Häusermann) marks the beginning of an association that leads them to develop together different structures construction techniques in "shells" by spraying on forms swollen materials. Pavie even meets Antti Lovag.

Together they begin to experiment with new construction techniques combining inflatable forms with stretchy knits as material projection brackets.

Structural materials such as concrete, the plaster, cob, being implemented by mechanical projection (Gunite) or manual.

Summer 1977, the two partners split. Henry Pavia leaves the United States and re-dwelt in Paris. He devoted himself to writing a titled memory “technical research to reflect on habitat” . Based on this work, he obtained his degree in architecture D.P.L.G.

In spring 1978. He is then recruited by Rodney Fitch to the Parisian agency Fitch & Company. He held the position of Director of Architecture department and is responsible, as such, create and implement the new concept shops “Louis Vuitton” in the world.

He created, on the other hand, several concepts of hyper markets chains for retailers that built in the main cities of France. He participated in a project of underwater hotel “submabull” to be carried off Dubai, but it is interupted.

In 1980 Pavia Henry created his own architecture firm.

He wins a competition organized by the city of Roubaix for the development of the White-knit urban island, and it accesses the public commission (Fund deposits and Consignment). Ephraim Pavia Henry continued his research in order to develop technical means for the release of architectural forms he wants to see freed from the usual constraints of symmetry and geometry. It considers that the funding of housing must, like a garment, cover (sometimes find) interior spaces and functions, flexibly, fluidity and elegance. This envelope must incorporate the interactions of habitat and the different components of the external environment. He obtained a building permit for an experimental solar house in La Gaude, in the Alpes-Maritimes, but the election of a new mayor leads cancellation of the license.

1981 Ephraim Henry Pavia is interested in Israel and it extends its activity. It proposes the creation of a futuristic leisure complex in Mikhmoret (in) a new solar architecture. Without funding, the project was finally abandoned .Pavie undertakes its activity in Israel by conventional projects including studies on behalf of the Consulate General of France in Jerusalem, the Air France headquarters in Tel Aviv, the building that serves as home to the Egyptian ambassador in Israel in Herzliya, residential and commercial projects in Ramat-gan, Tel Aviv, Jerusalem, and the Jerusalem area. It is continuing her research on the construction techniques of inflatable forms and file a new international patent. It develops and grows still further its architectural style staff, freeform double curvatures.

In 1998, he was invited by the municipality of Rishon LeZion to participate in a limited competition for Yaacov Agam.Le biomorphism Museum and the neo-futurism 14 emerging from the buildings constructed in the years 2007-2013, are not appreciated by all, but encounters a rather laudatory echoes in the press.

Pavie-House 15,16, located in Neve Daniel in Gush Etzion,, undoubtedly a pole of tourist attraction and attracts many architecture students. Pavia is currently developing new projects in the areas of southern Negev and Mateh_Yehuda.

In his studies, it emphasizes the aerodynamic structures, harmonious harvest rainwater, the integration of solar collectors as natural constituent elements of the concept particularly in bends double glazing. 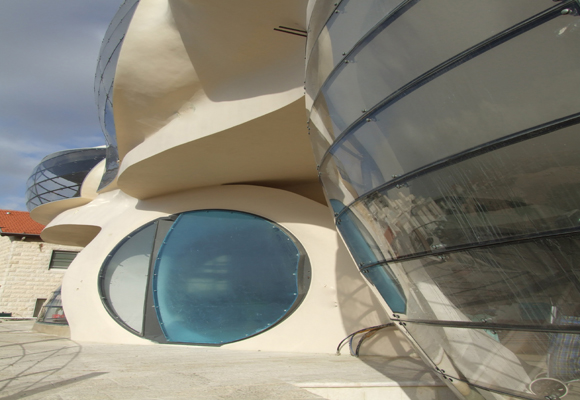 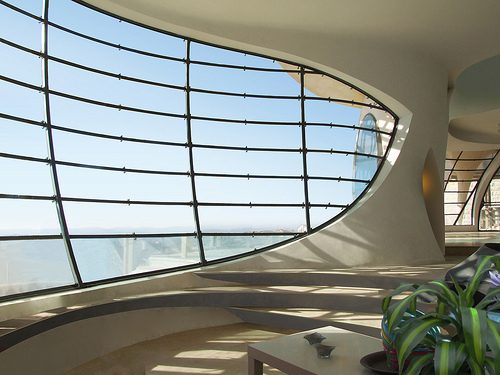 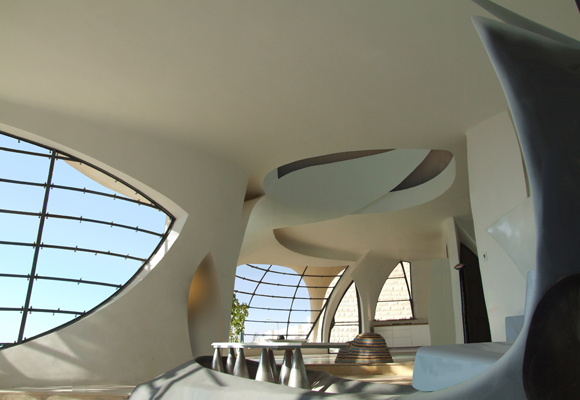 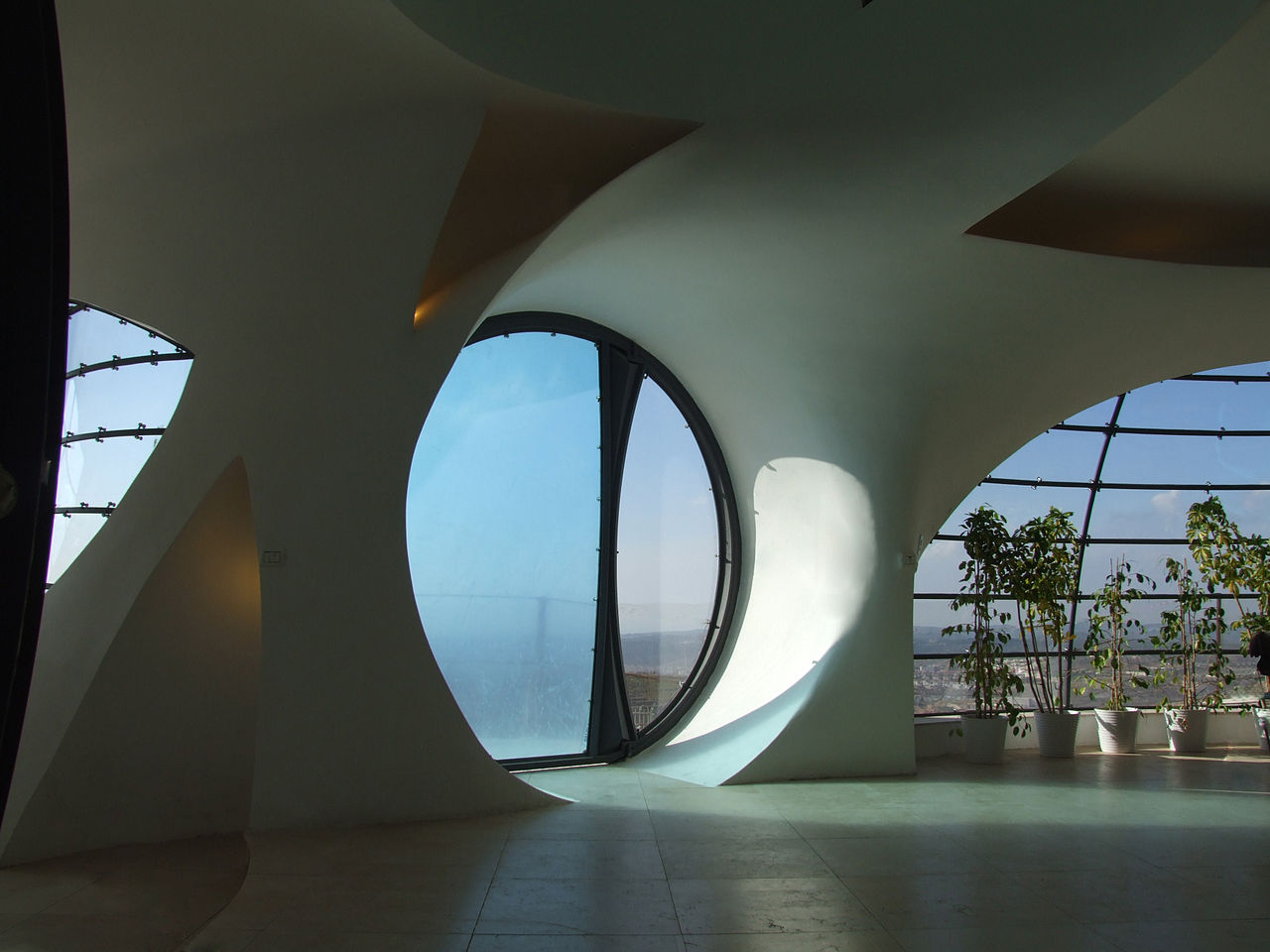 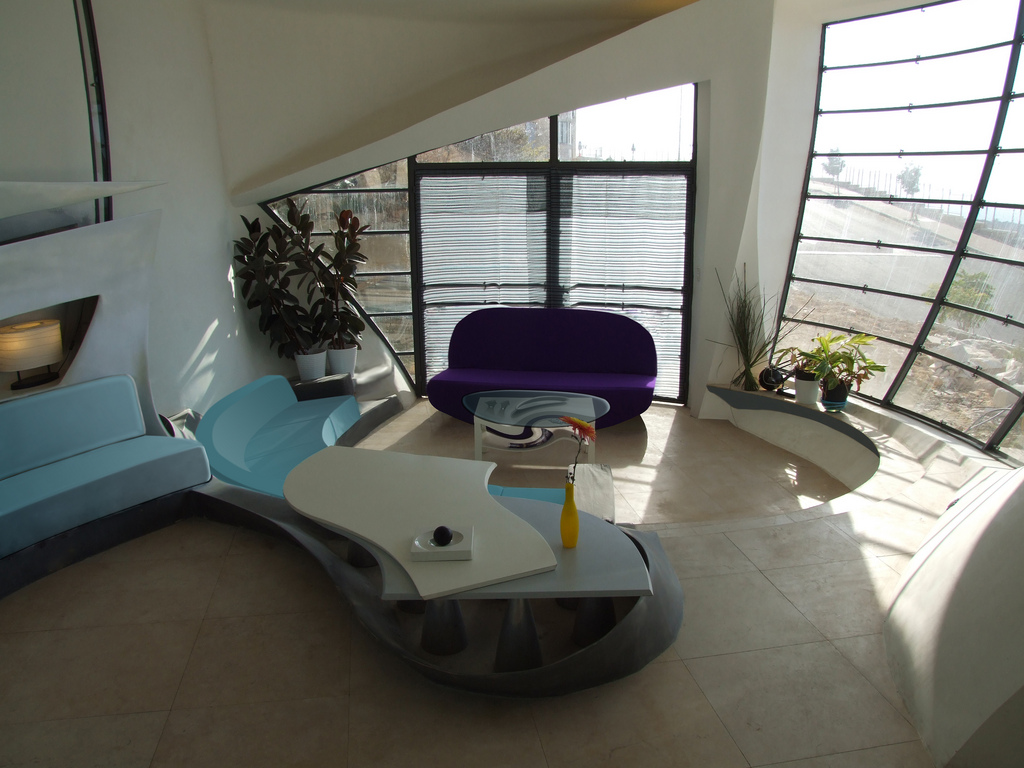 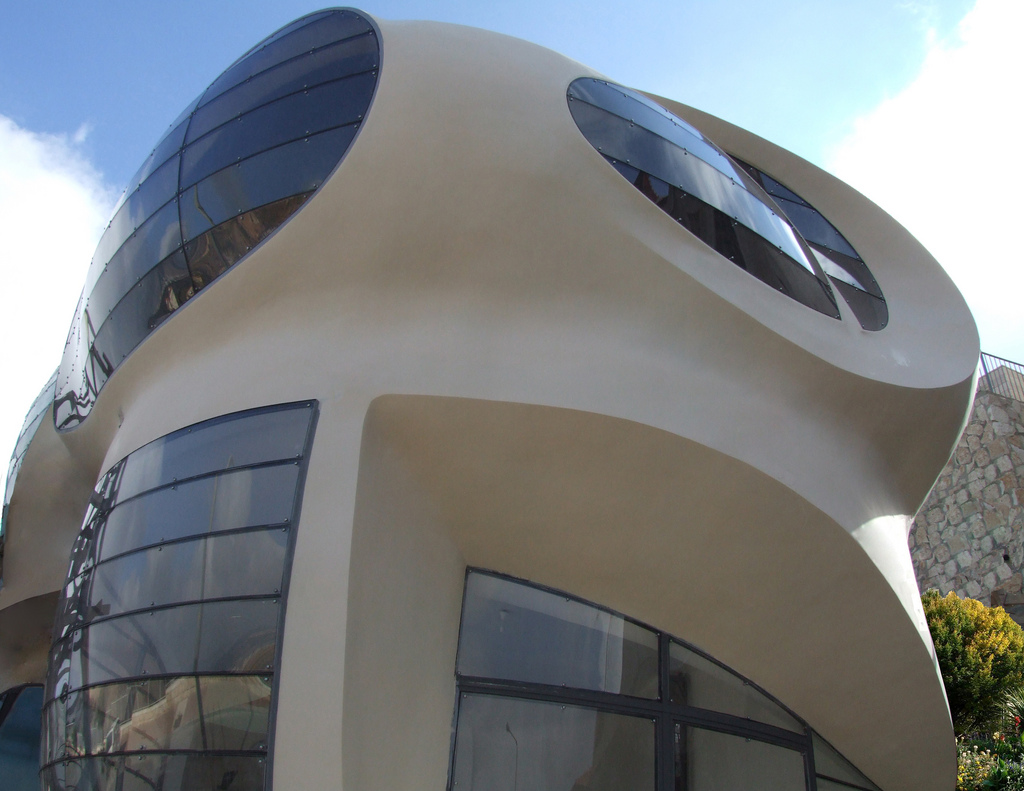 1:04 futuristic house, expression of a sensitive architectural approach. The concept freed of the usual techniques and geometric constraints, unfolds as a natural. The soft shapes, curves, the game of
overtures, gloss and smooth perfect finish of this piece in the workforce are the architect's response to users interested in the integration of fengshui art eco-requirements in a futuristic architectural design. 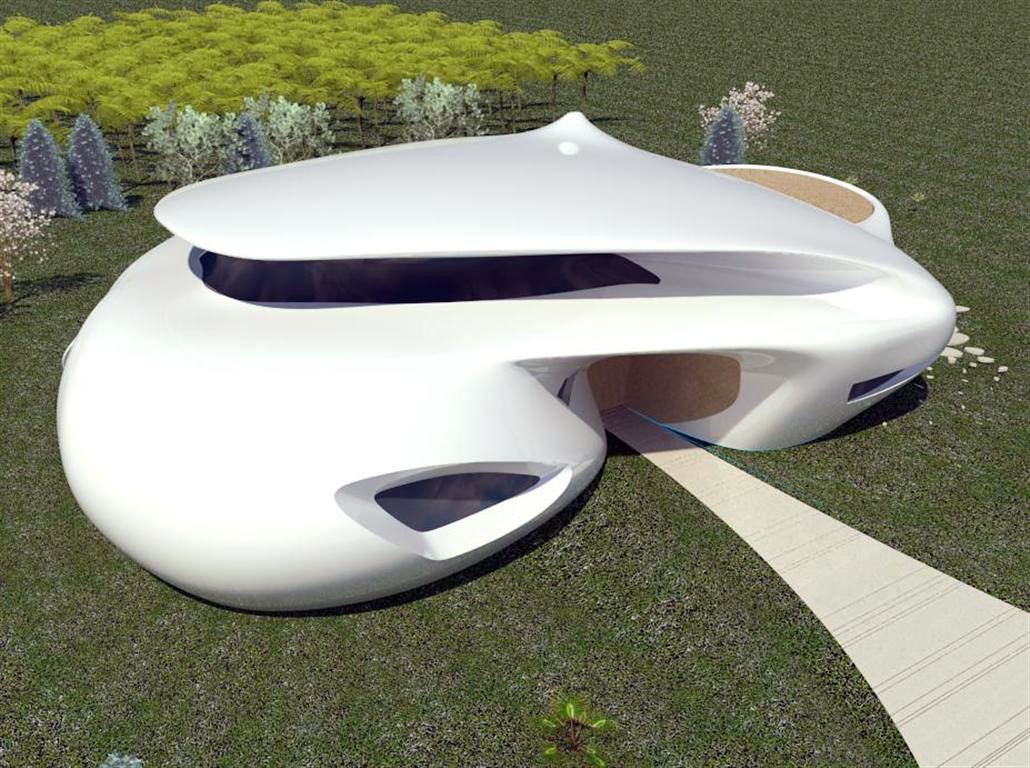 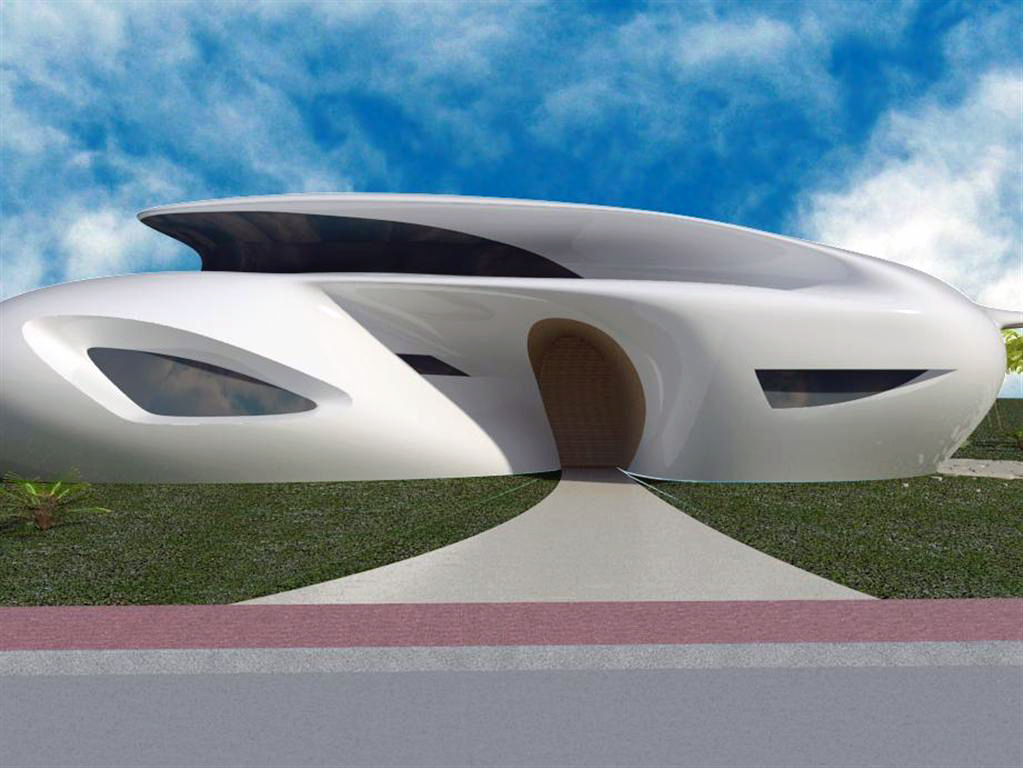 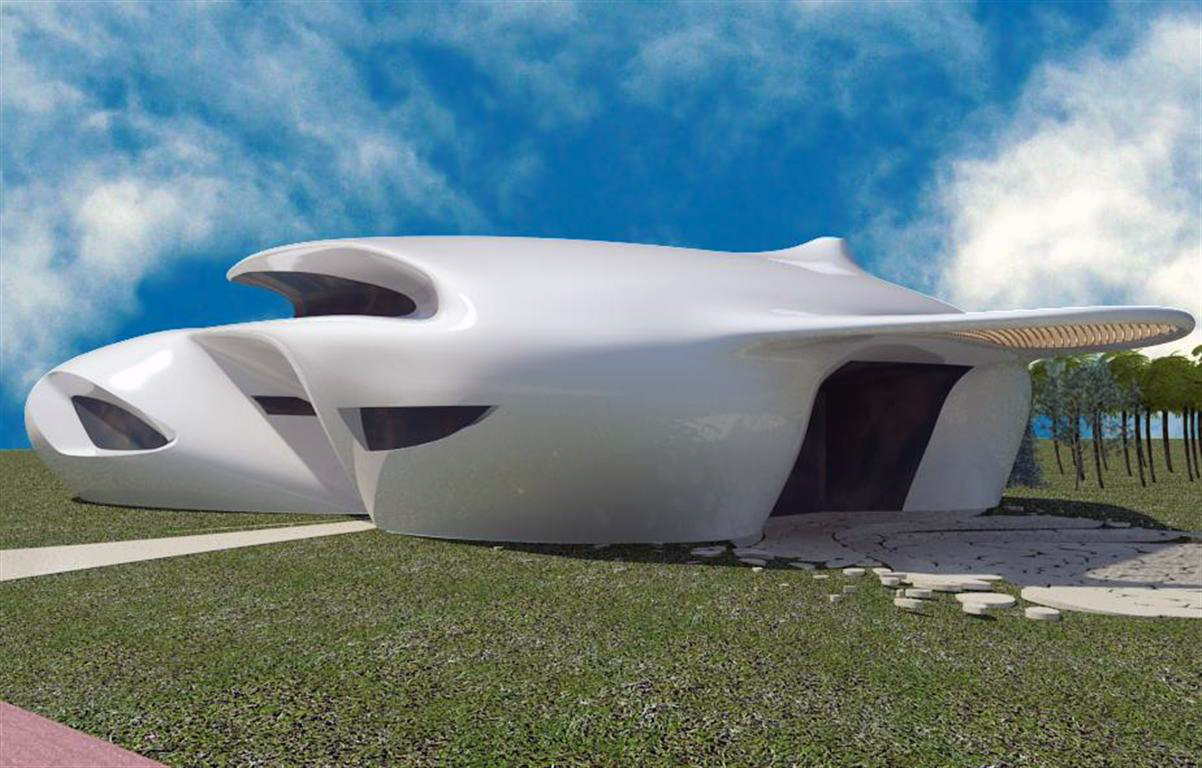 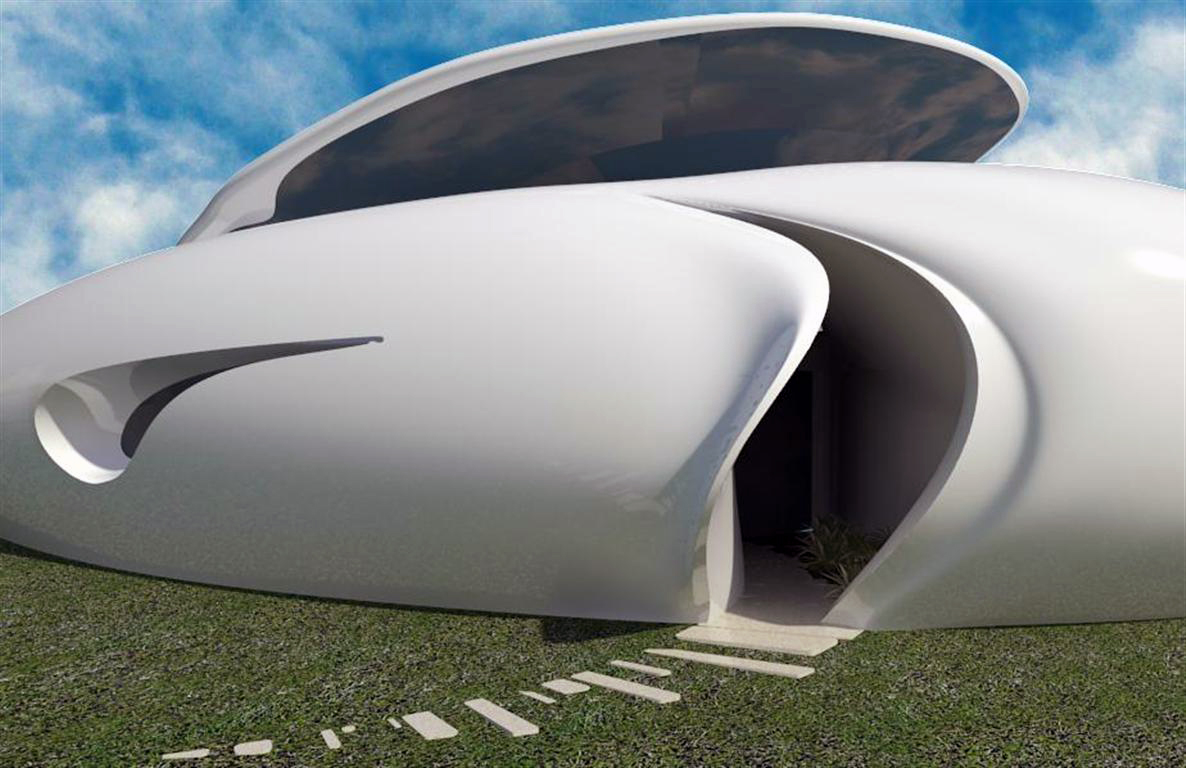 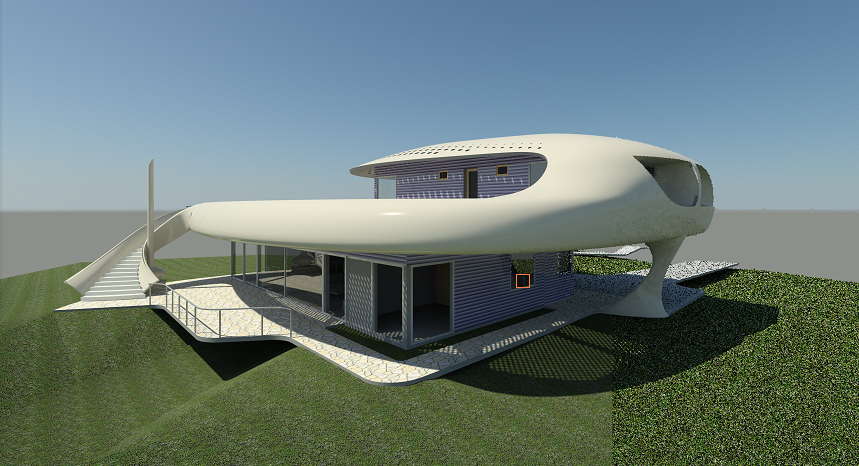 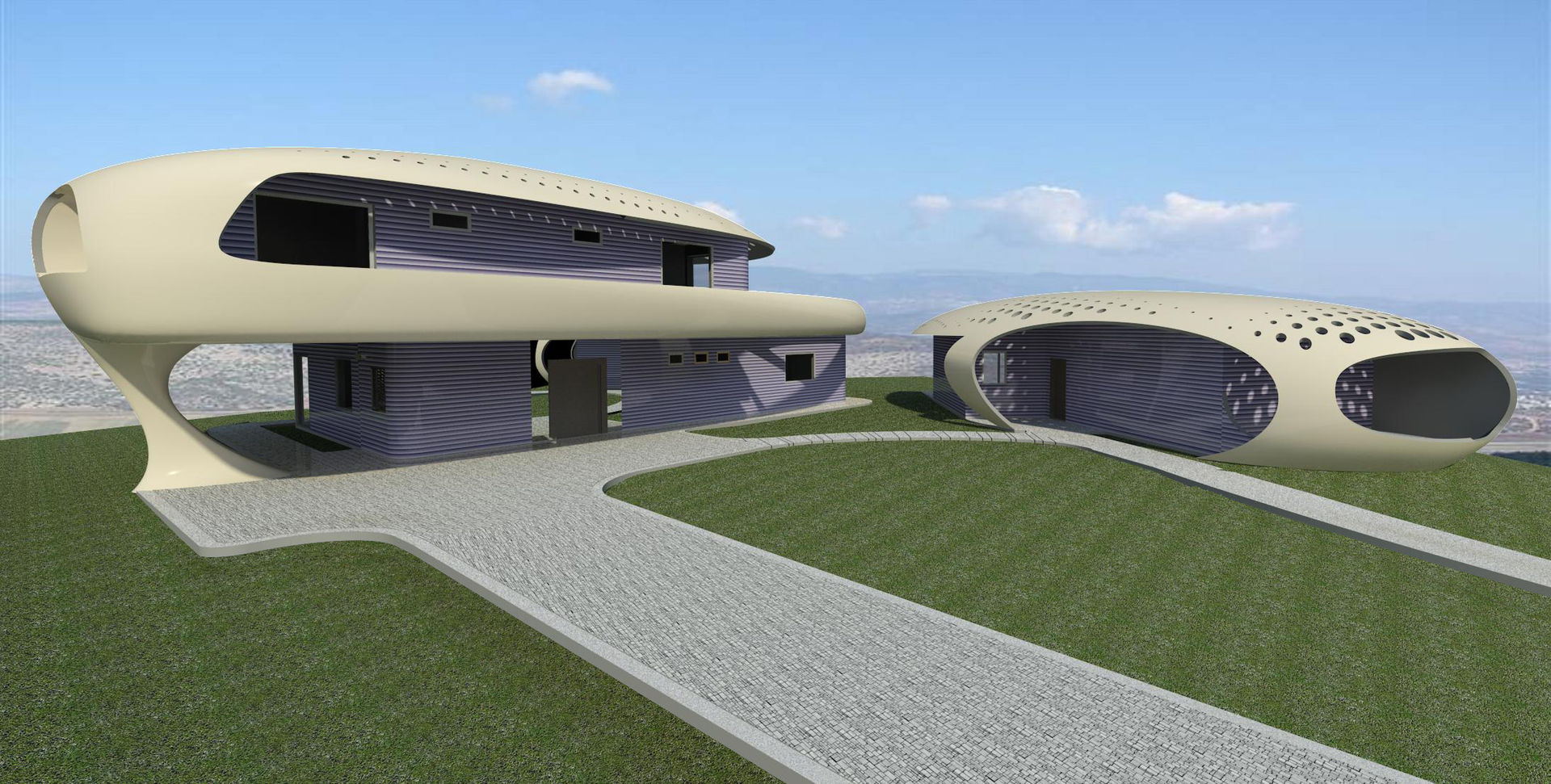