The elevator single rotating boats in the world

“This works on the Archimedes principle of displacement. In other words, the mass of the sailing boat in the gondola move exactly proportional to a volume of water such that the final combination of boat plus water balance total original mass”. 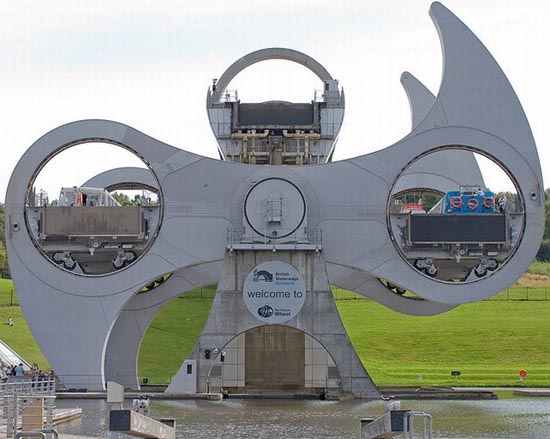 The Falkirk Wheel – How it works?

The Falkirk Wheel is at the end of an aqueduct that connects reinforced concrete, Roughcastle via the tunnel and’ a double lock staircase, the Union Canal. Ships entering upper gondola of the wheel are lowered, and they float in water, in the basin below – below. At the same time, weighing up, lifted in the other boat. This works on the principle of’ Archimedes displacement. In other words, the mass of the sailing boat in the gondola move exactly proportional to a volume of water such that the final combination of "more boat water balance total original weight. Each nacelle rotates on small wheels which run in a curved rail fixed on the inner edge of the opening on each of the arms. In theory, that should be enough to ensure that they always remain horizontal, but any friction or sudden movement could cause the platform to tilt or paste. To ensure that this could never happen, and the water and boats always perfectly remain level throughout the entire cycle, a series of related machinery acts as a back up. Hidden at each end, behind the nearest arm of the aqueduct, are two 8m diameter sprocket to which one end of each gondola is attached. A third cog size, is exactly equivalent in the center, attached to the main fixed amount. Two smaller teeth are mounted in the spaces between, each gear having teeth that enter the adjacent tooth and push against each other, rotating around’ a fixed central. The two gondolas, being fixed on the outer gearwheels, will therefore run at exactly the same speed, but in the opposite direction to the roue.Compte given the precise balancing of cable cars and this simple but intelligent system of teeth, a very small amount of energy is actually then required to turn the wheel. Indeed, it is a group of ten hydraulic motors located at’ within the central column which provide small amount, simply 1.5kW, electricity turn. 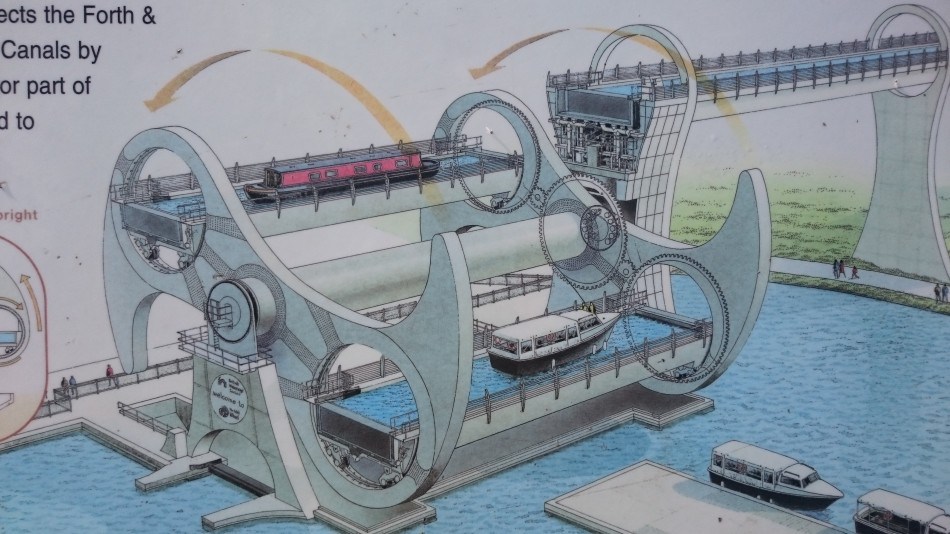 The Falkirk Wheel and Falkirk Wheel is a rotating boat lift, located in Scotland, Falkirk, near Edinburgh, linking the Forth and Clyde Canal with the Union Canal. This spectacular elevator is recent, puisqu'inauguré by Queen Elizabeth during her Golden Jubilee, the 24 May 2002.

The Falkirk Wheel is capable of raising the boat 24 m once, but the Union Canal is still located below 11 m, river boats and other craft must still go through two locks to join the. The concept of the Falkirk Wheel is unique, which became a self attracton, attracting many tourists. Note that Britain welcomes Anderton boat lift to the oldest in the world, built in 1875, but according to a more classical concept.

La Falkirk Wheel is a spectacular lift rotary boats diameter 35 meters, which replaced an old system of long and laborious passages 11 locks which were spread over a day. dismantled in 1933 since fallen into disuse, the system remained without replacement project and canals remained closed.

The restoration of a waterway between the North Sea and the Atlantic Ocean will wait until 2002, Year of the Falkirk Wheel commissioning. 20 architects and engineers to a roundabout turn 98 million francs.Sous by Tony Kettle of RMJM agency, a team of 20 experienced engineers and architects are involved rethinking the aesthetics and the overall design of a first draft looked like a big fair wheel, with four nacelles. After a summer of research, Kettle uses Legos daughter of 8 years to present the final model, as "very gracious". The project was approved and funded by British Waterways, Scottish Enterprise and various European funds. The ground on which the wheel has to be asked once home of clay and coal mines and a factory polluting tar. piles of 30 x 22 meters must be implemented to reach bedrock and stabilize the anchor. Due to the wheel rocking motion, the weight imposed on the structure being changeable, sections were bolted rather than welded to avoid any risk of cracking. 14 000 bolts and 45 000 bolt holes were needed.
A canal bridge inconstructible First described as "unbuildable" finally saw the bridge construction is achieved through reinforcing bars of 40 mm. Two of the wheel arms are attached to the central axle 3.8 m in diameter and 28 m long. The arm ends are located caissons 250 000 liters of water which carry a total mass in each passage 500 tonnes. The weight of the boat and water is added that of the car itself, is around 50 tonnes. The water level must be kept identical on both sides to balance the mass at both ends of the arm. When the boat is placed in the basket, the mass of the water that comes out is equivalent. This is made possible by maintaining the water level in the range of about 37 mm on each side through an extensive computer system to the entire site. This system contains in particular detectors of the water level as well as pumps and automated locks. The power of ten hydraulic motors requires only 22,5 kilowatts, either by rocking 1,5kWh, This corresponds to the energy needed to bring to boiling eight kettles. 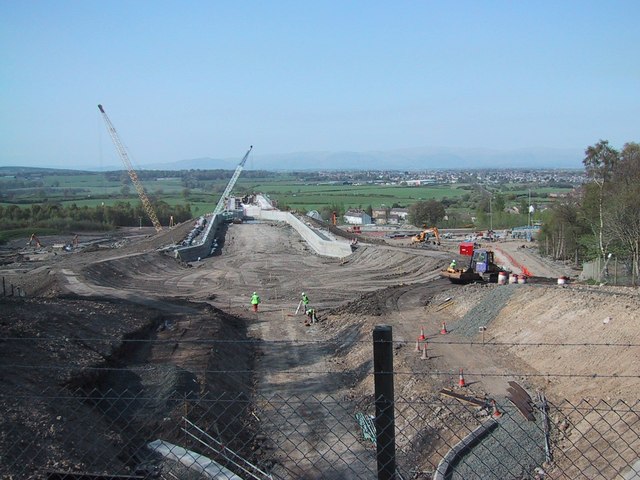 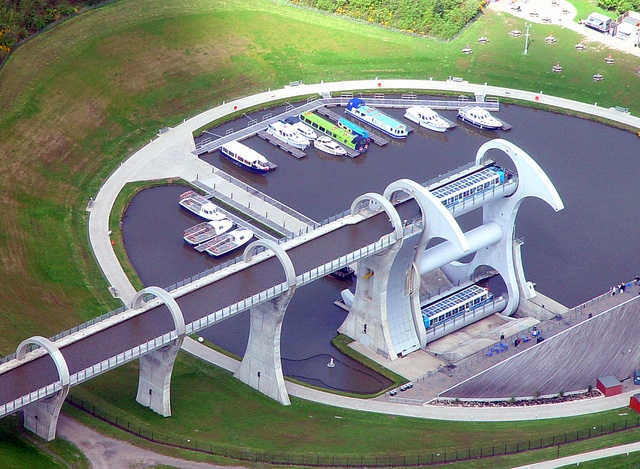 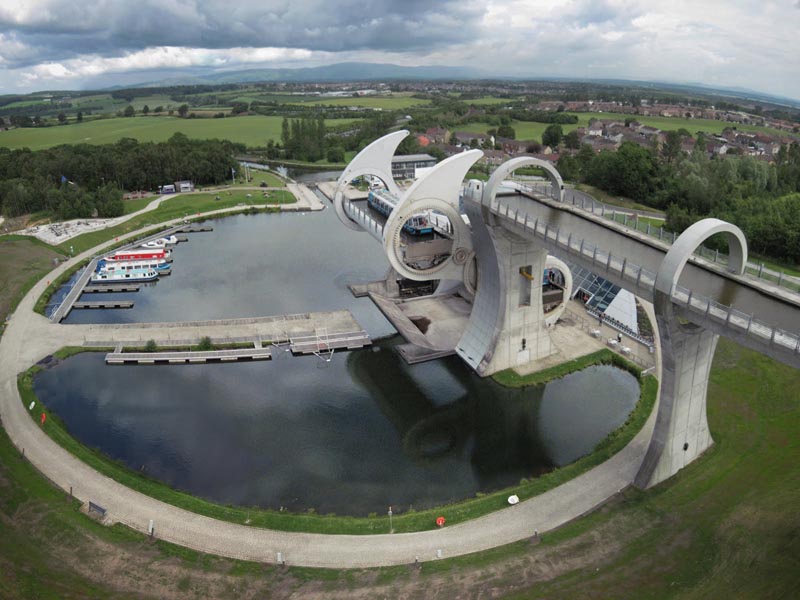 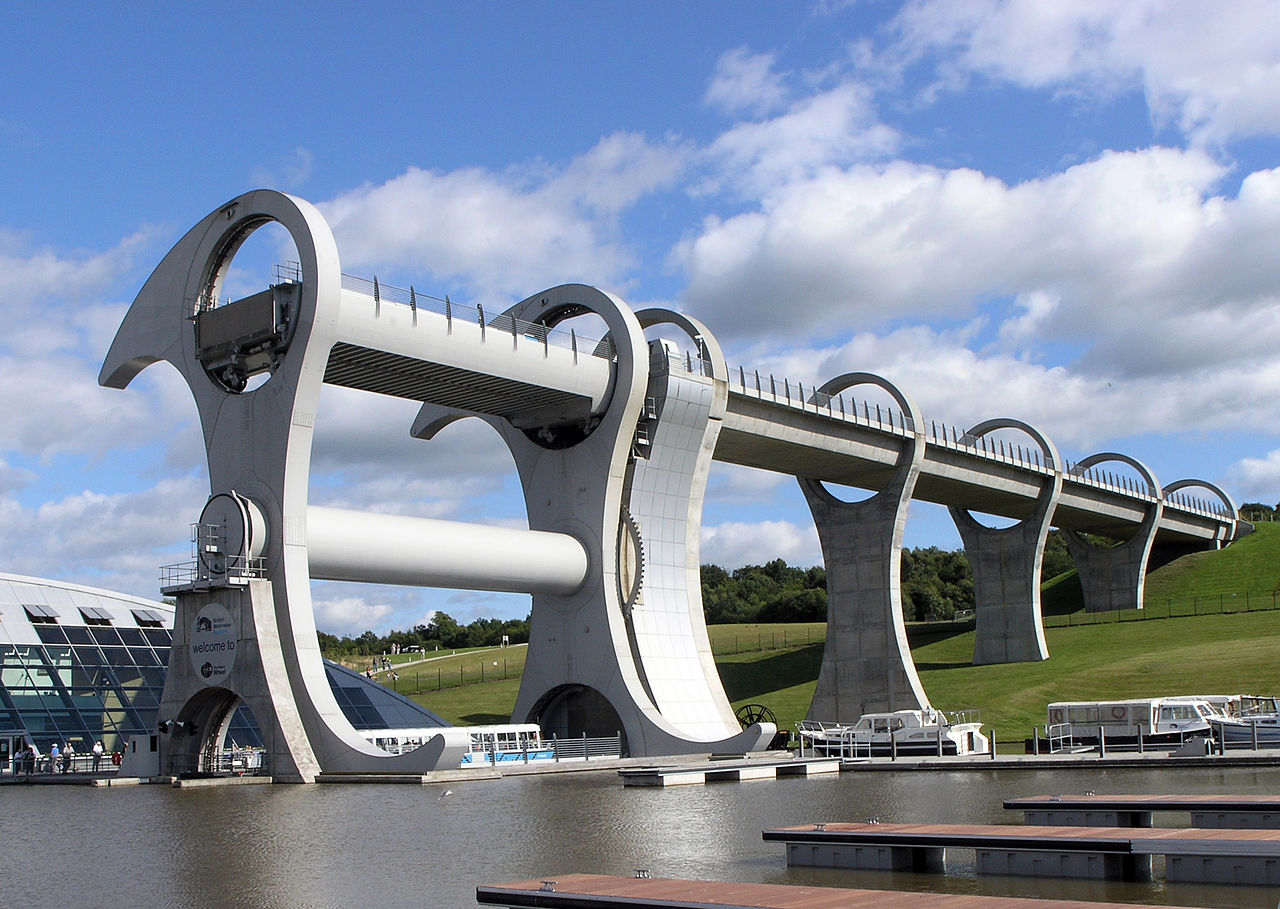 Documentary 8: 02 –
To cross gradients, the channels are provided with locks, sometimes very numerous and close together. The boat lift is a more technical climbs impressionnante.La wheel boats 35 meters to another channel only 4 minutes. 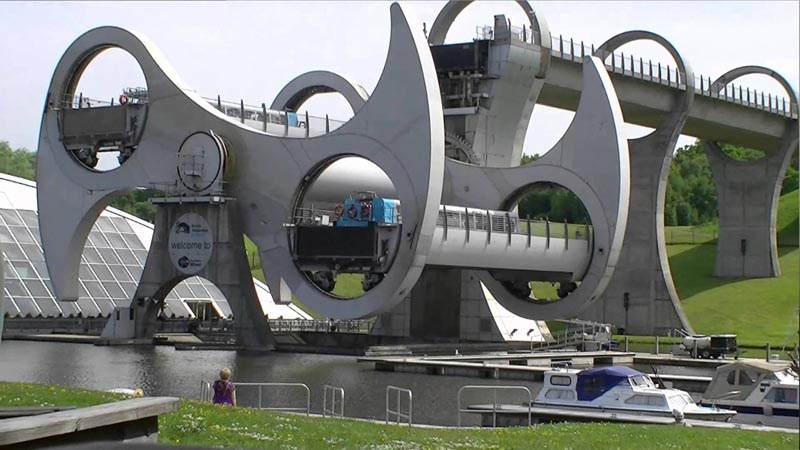 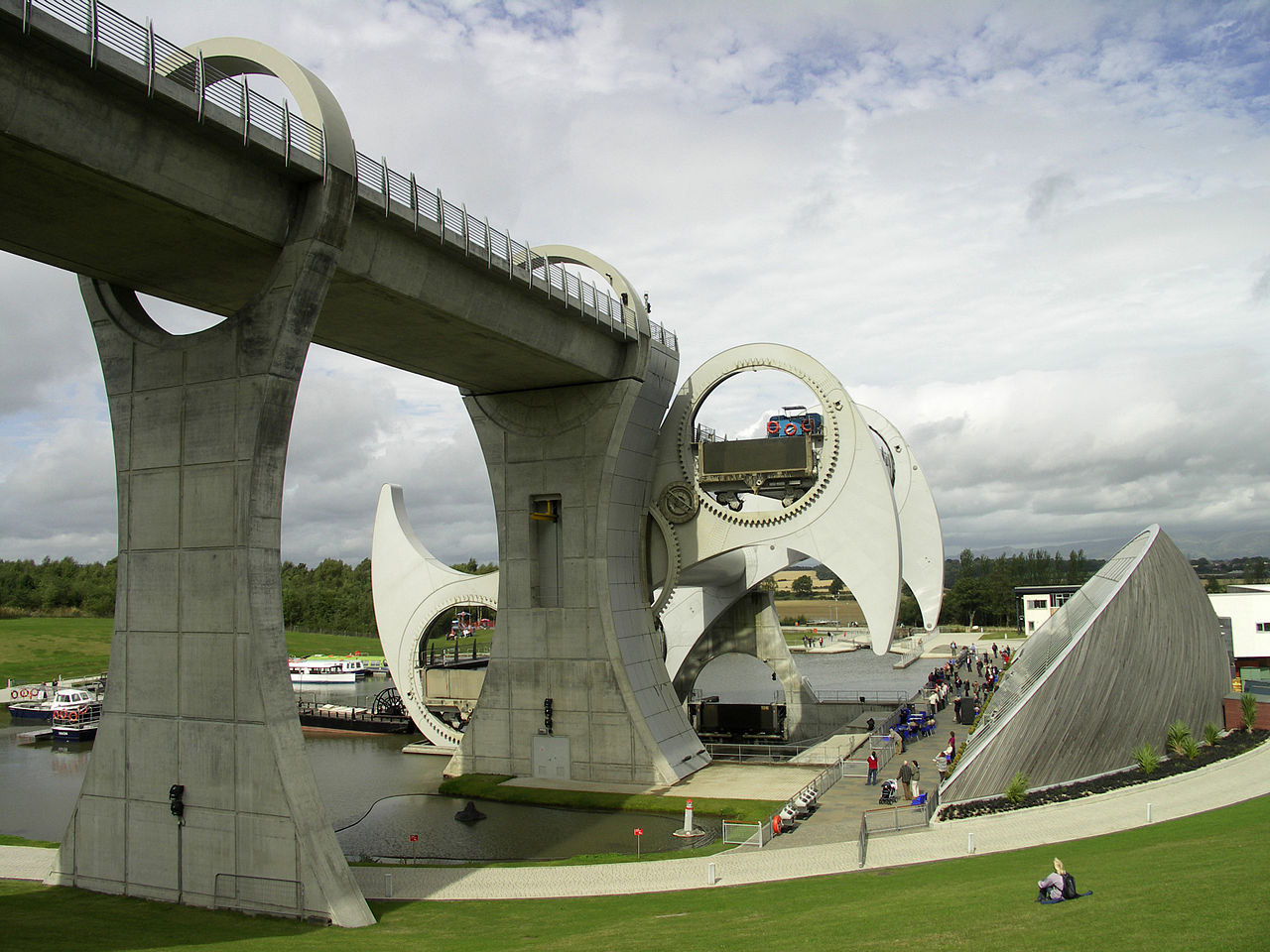 Wheel in motion. The building on the right is the visitor center.
The dry tank is visible in the center. 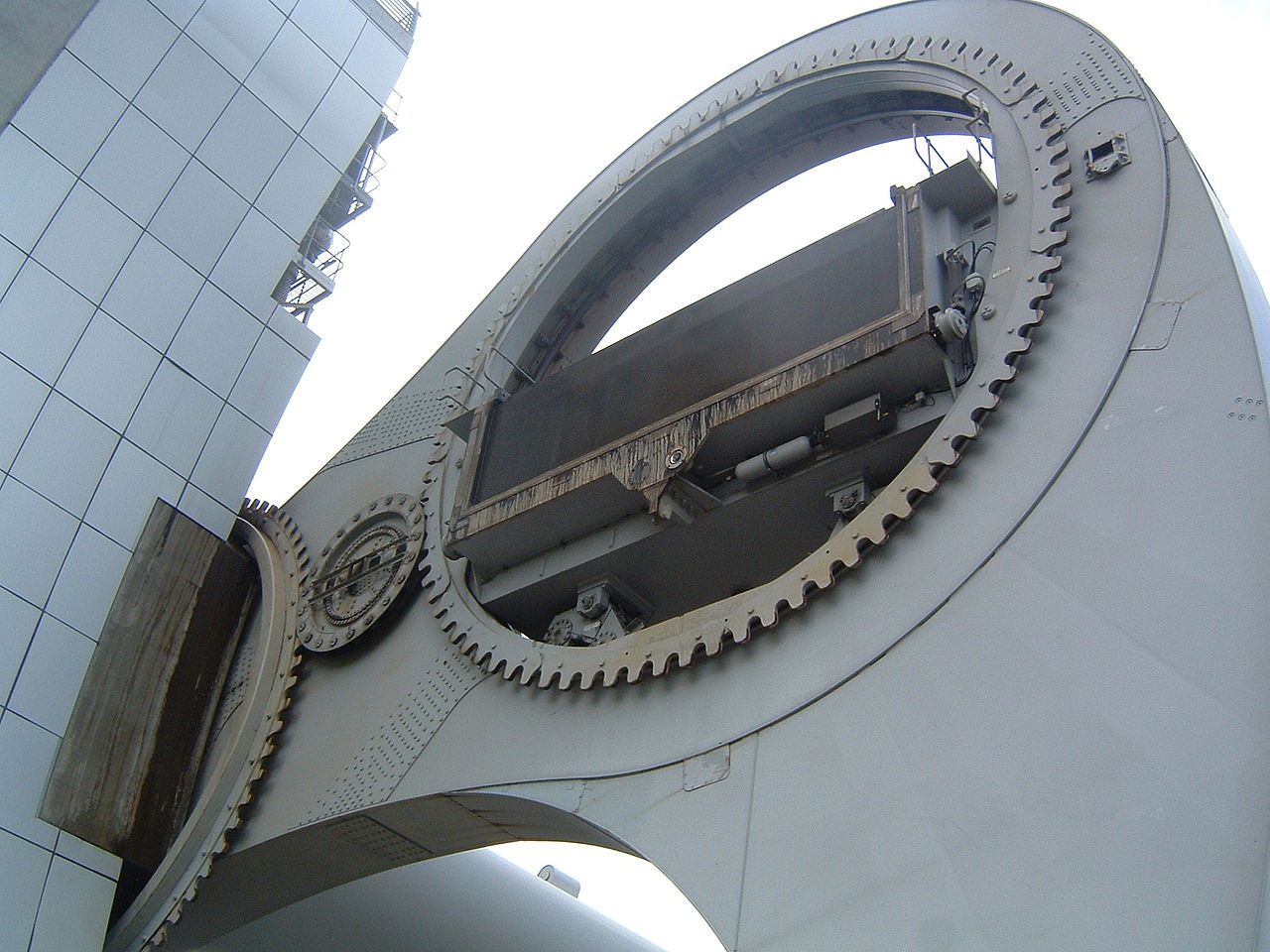 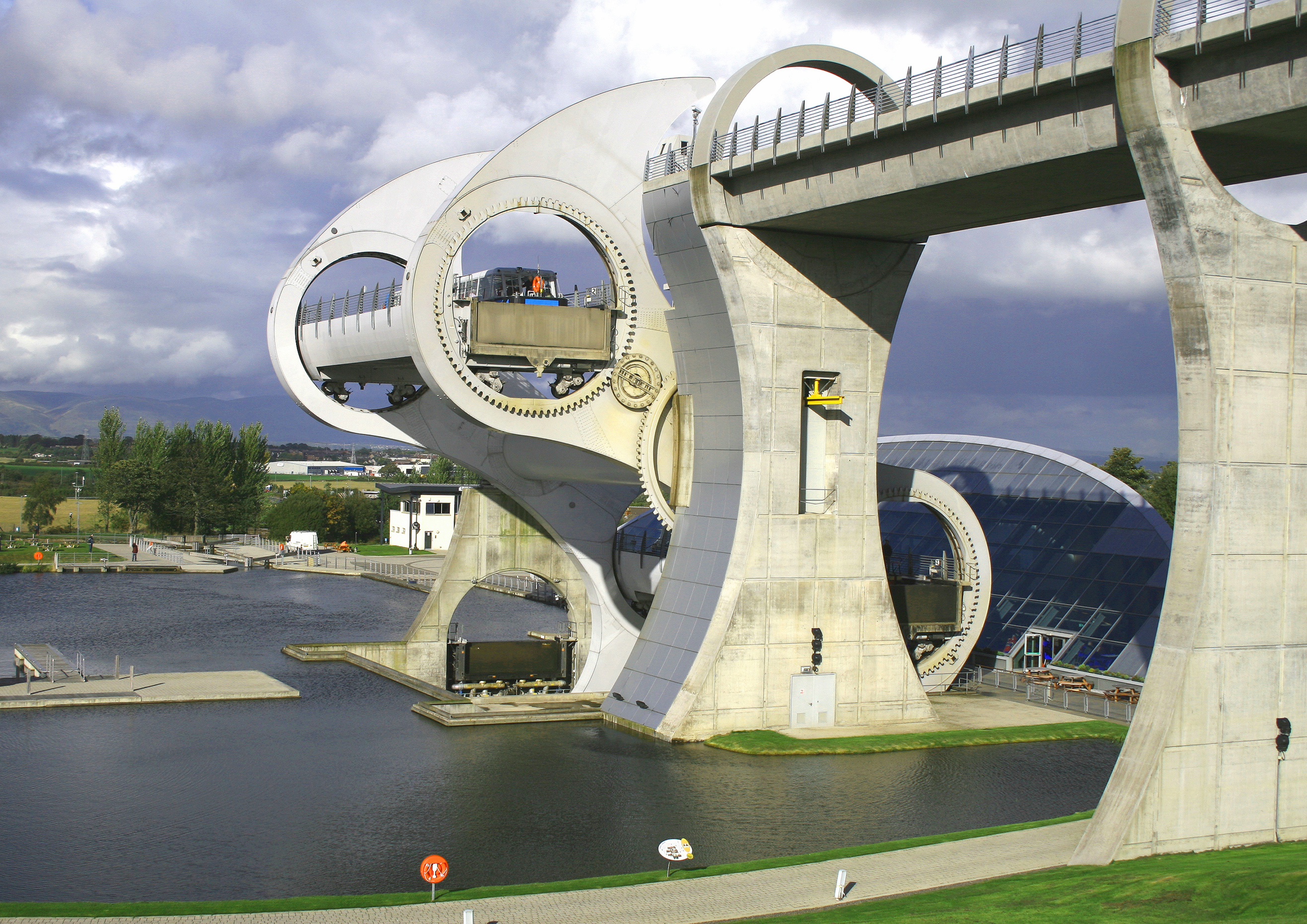 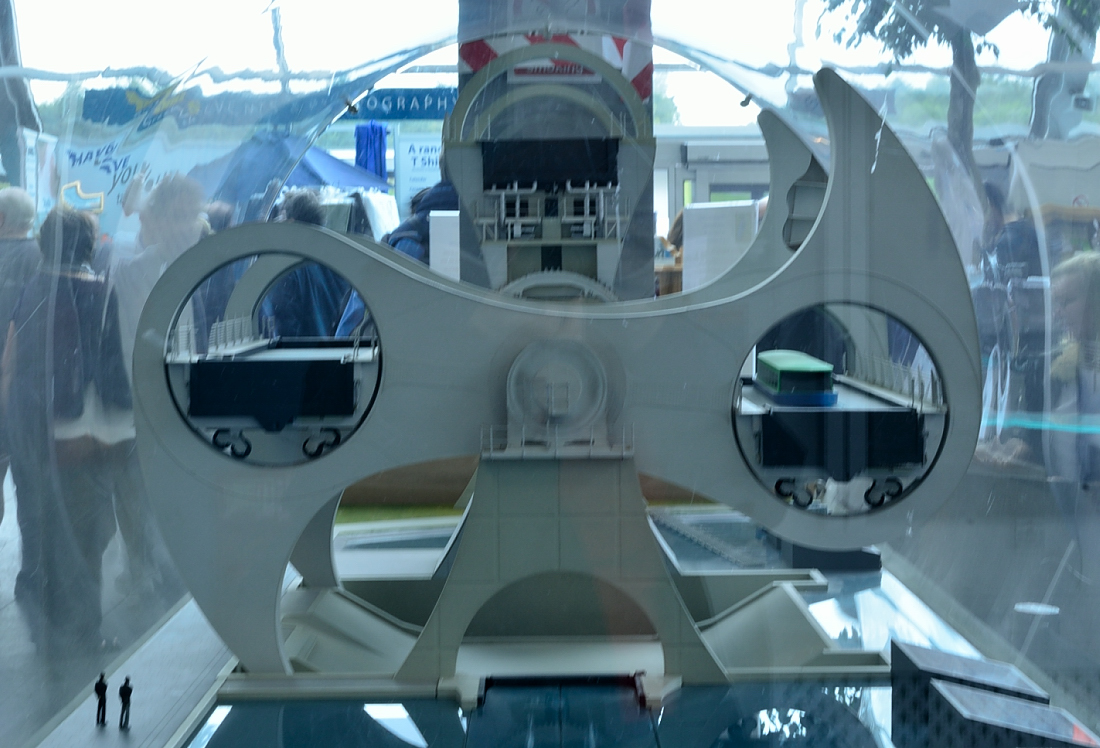 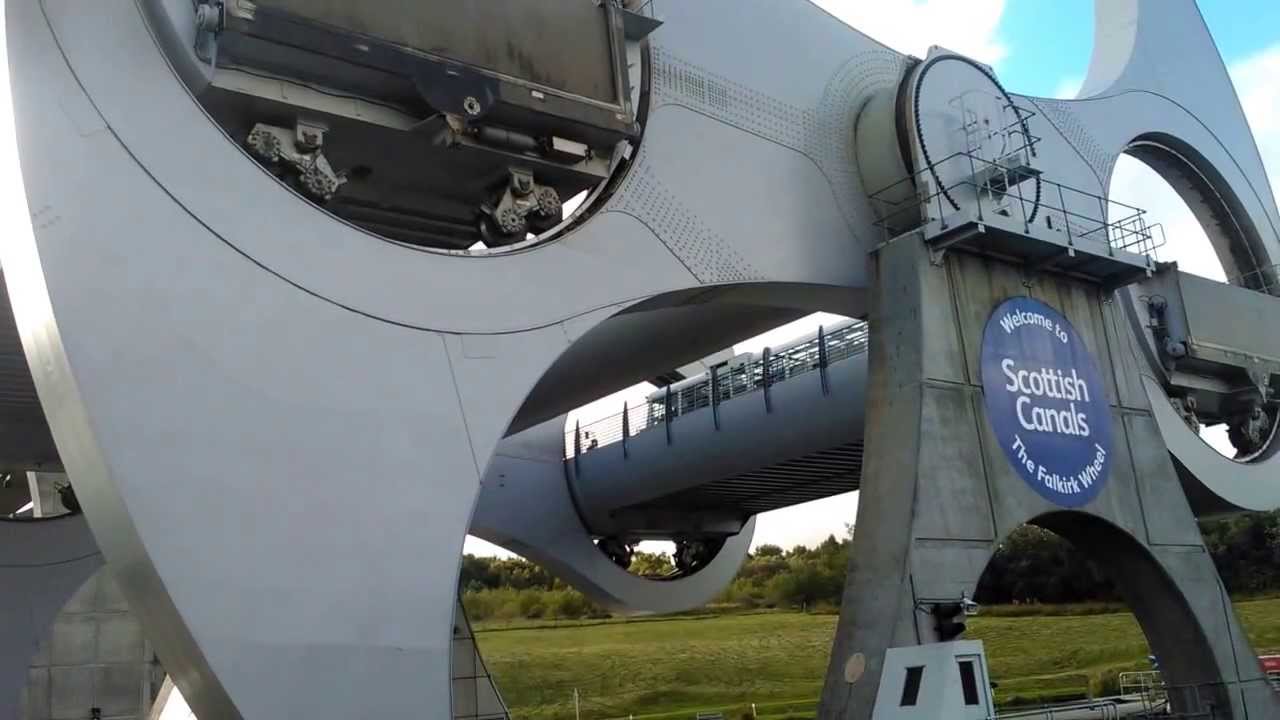 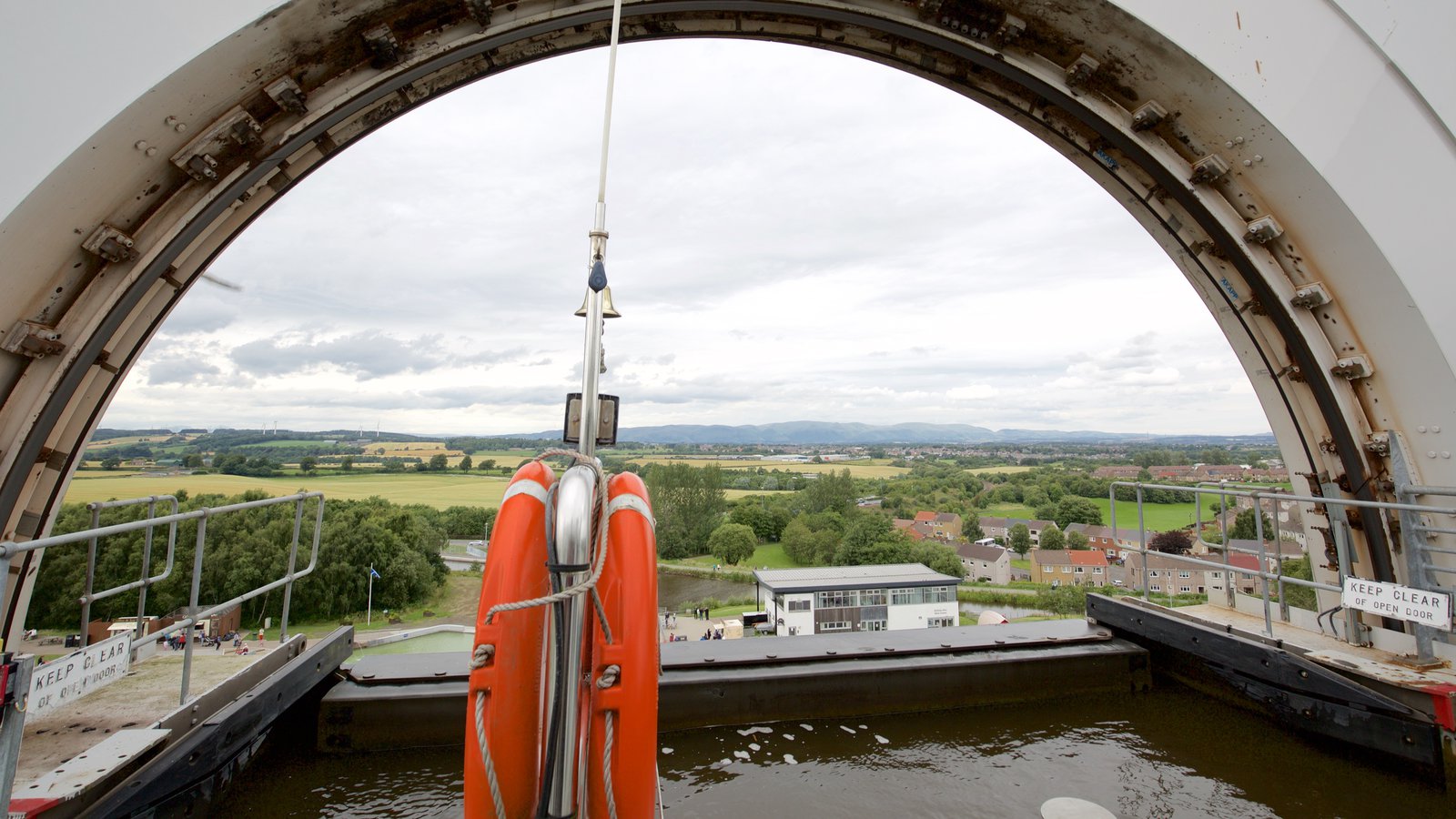 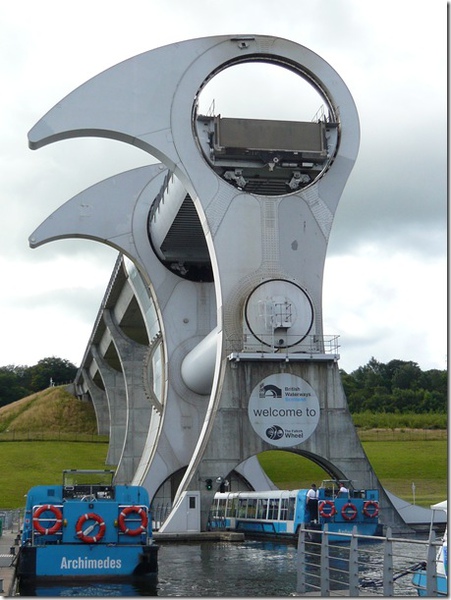 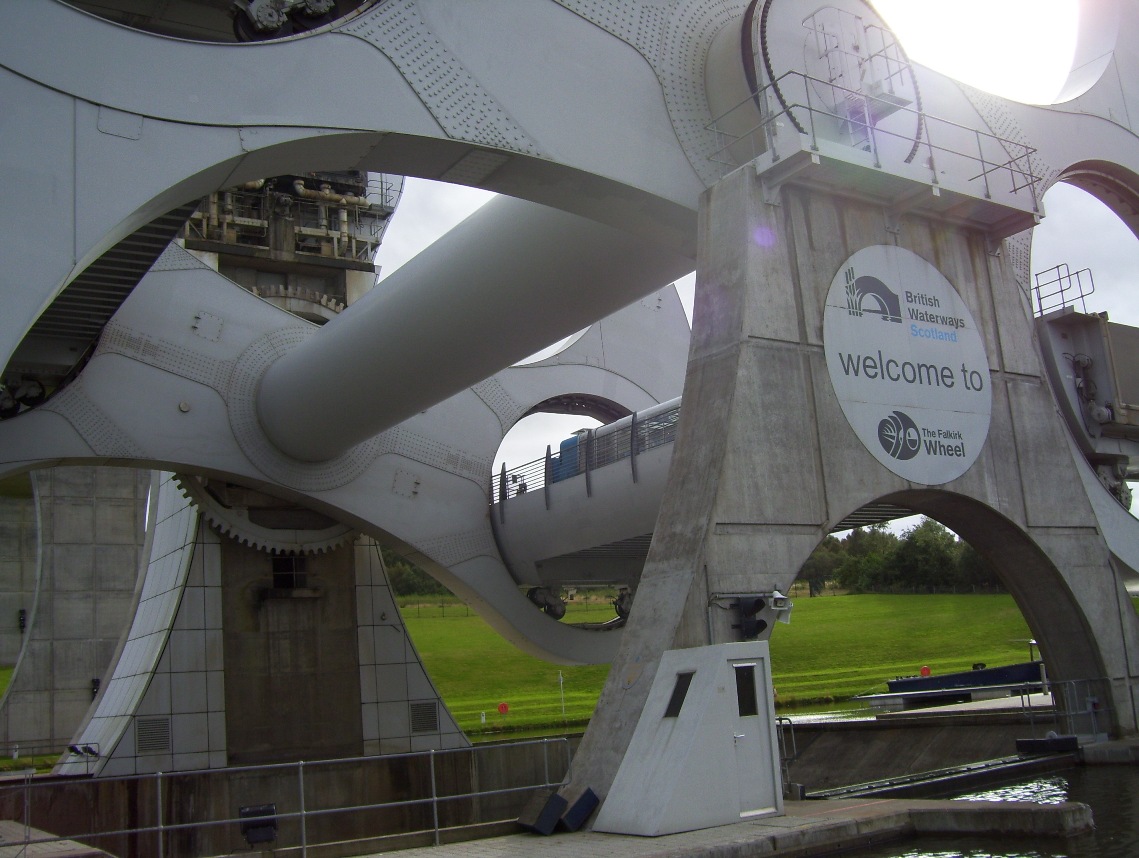 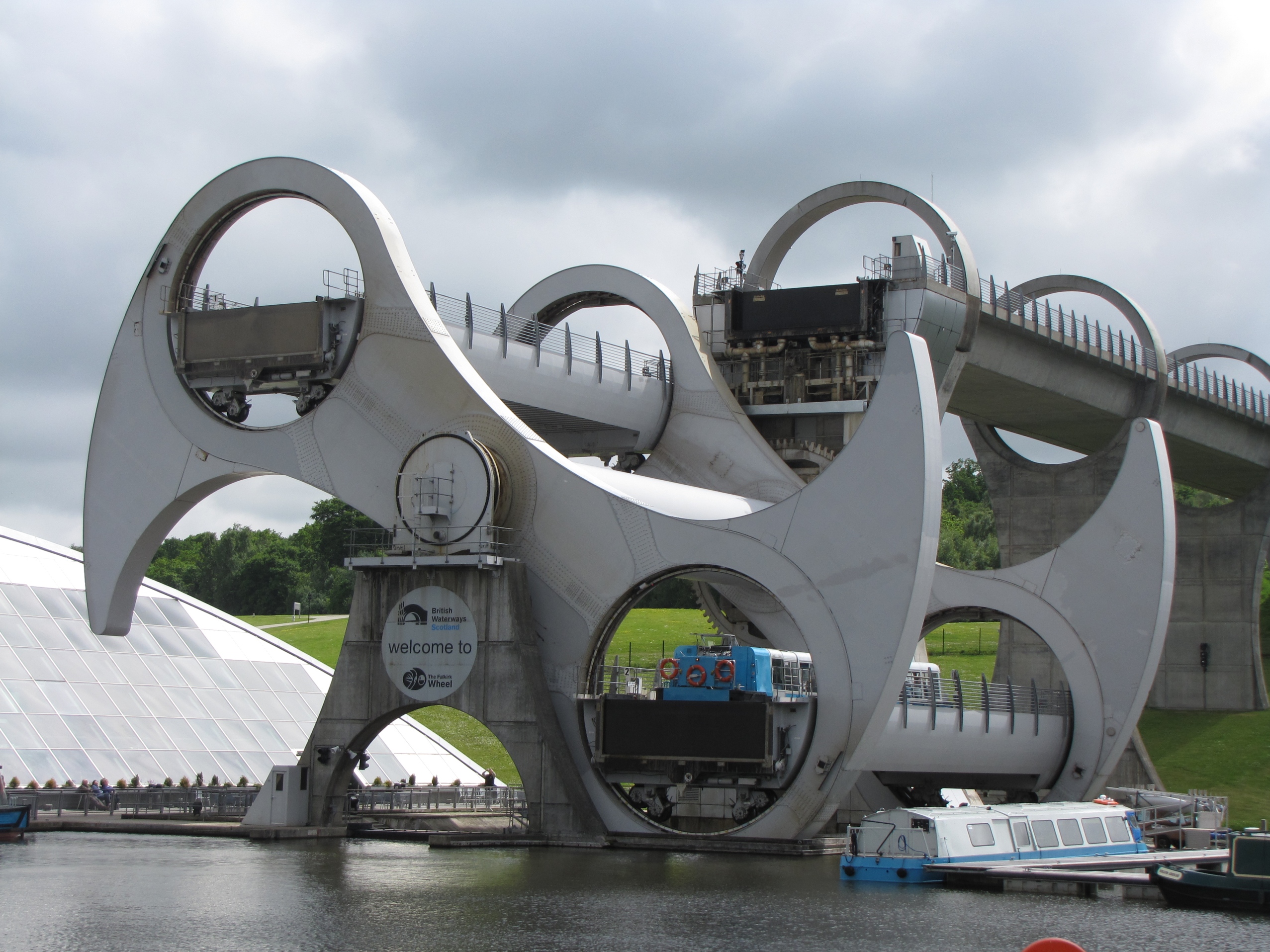 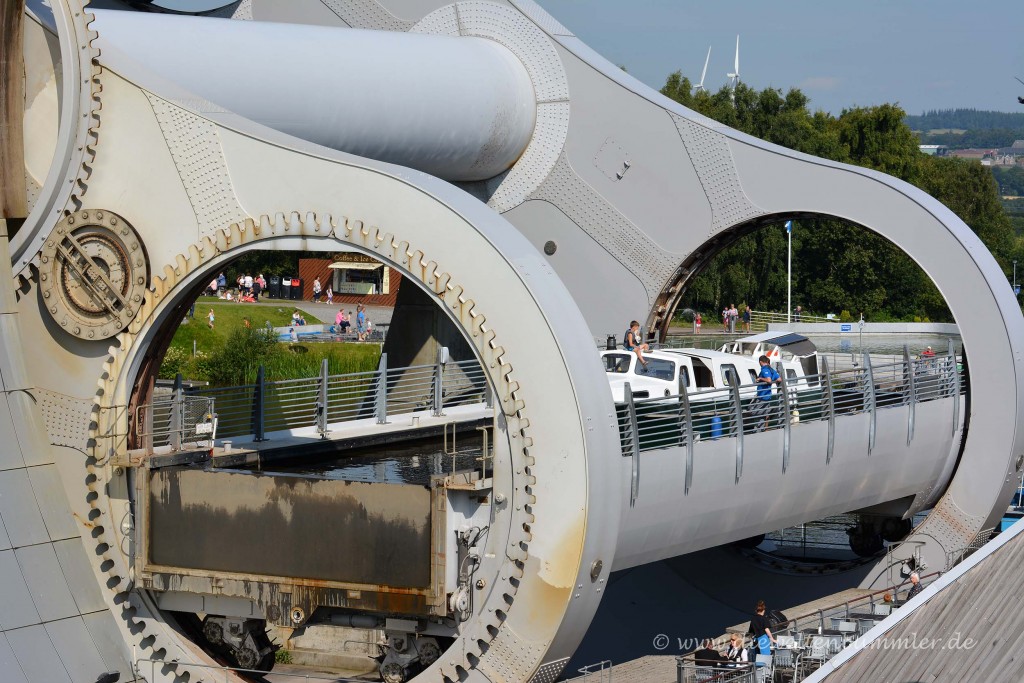 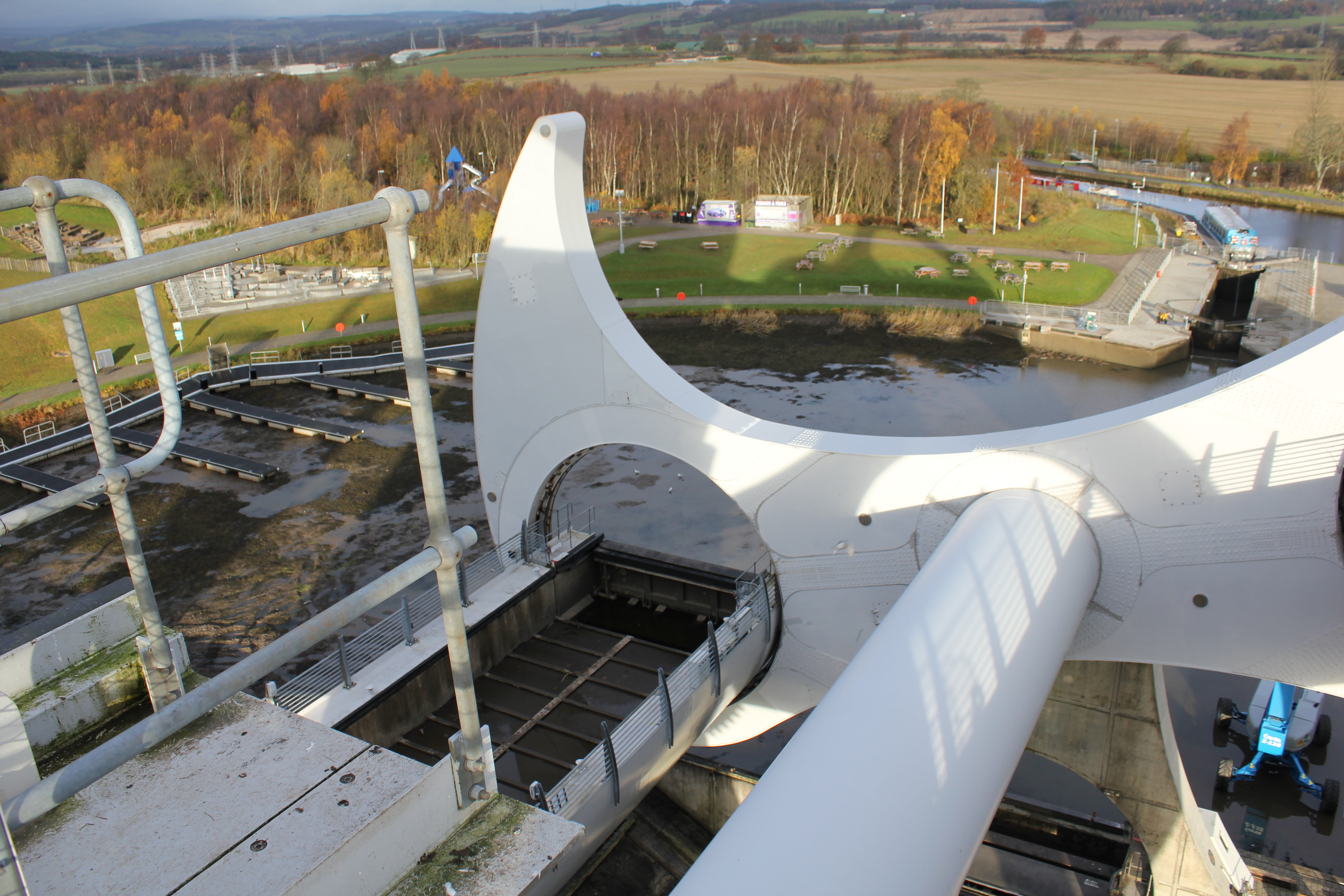 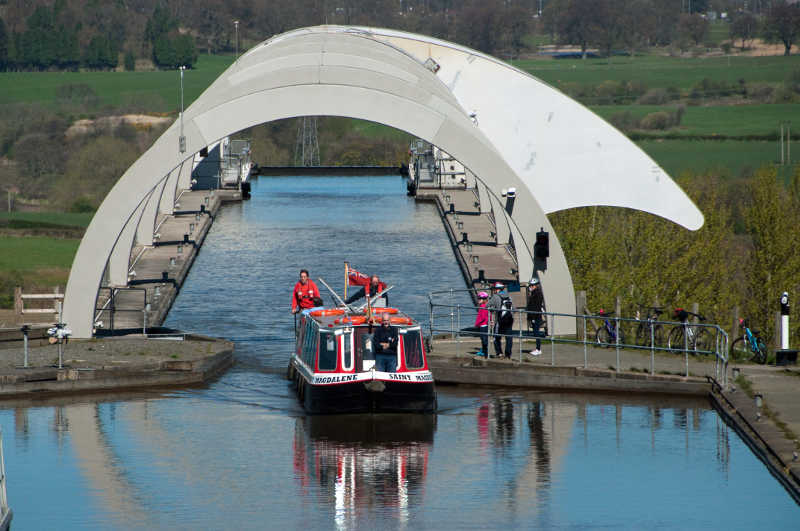 5:02 – Falkirk Wheel – 1st June 2016. Boat Lift Falkirk Wheel which joined the Union Canal with the Forth & Clyde. Filmed using a 3A Phantom and Osmo. 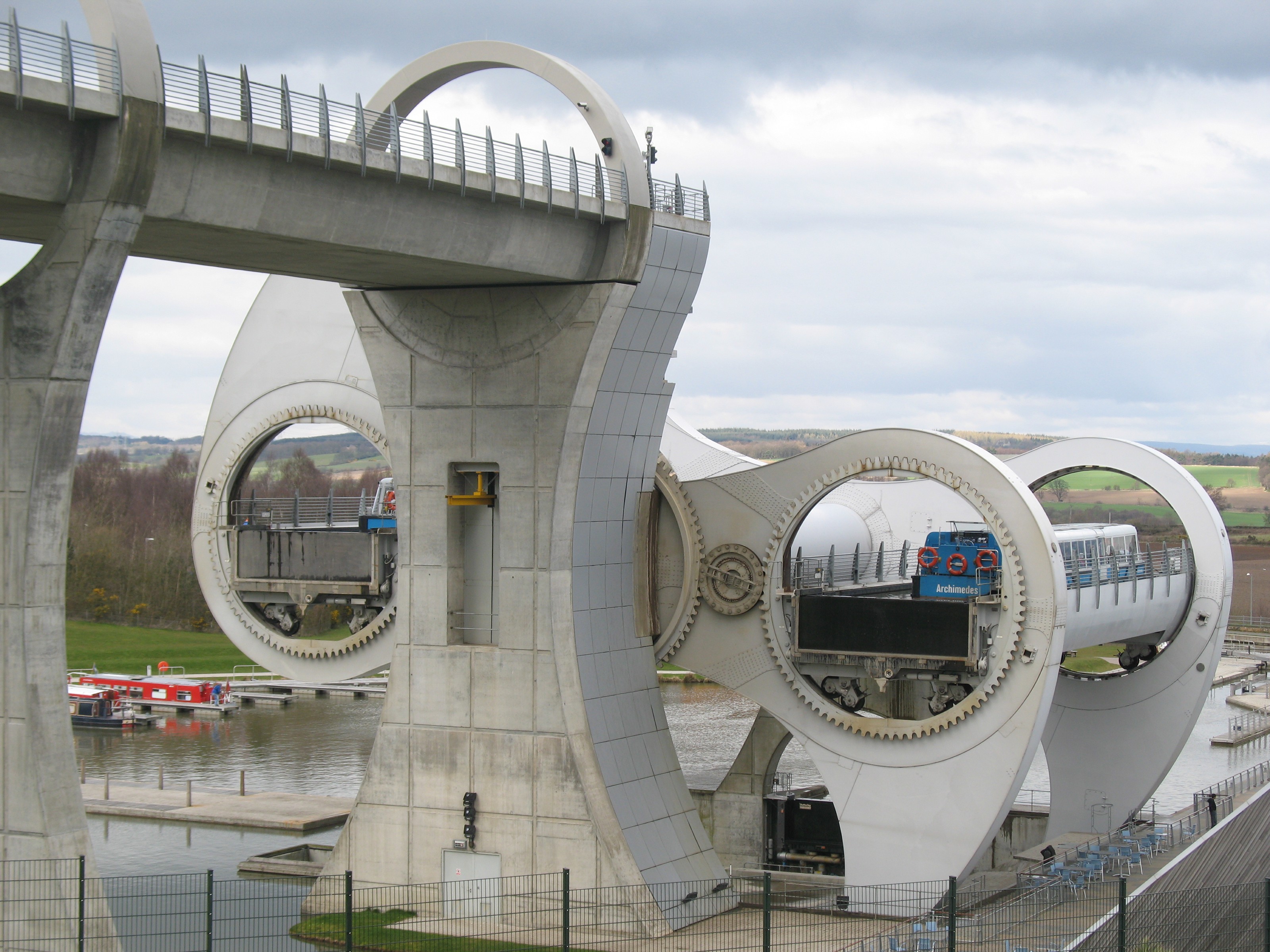 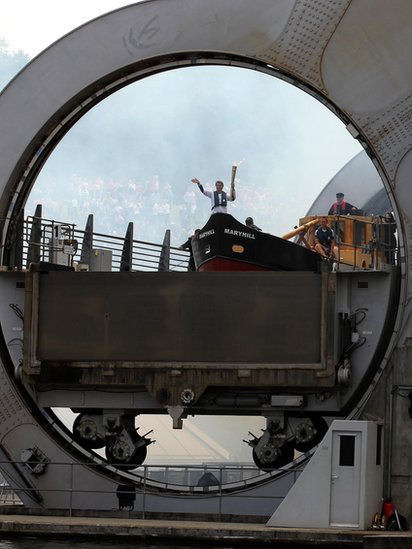 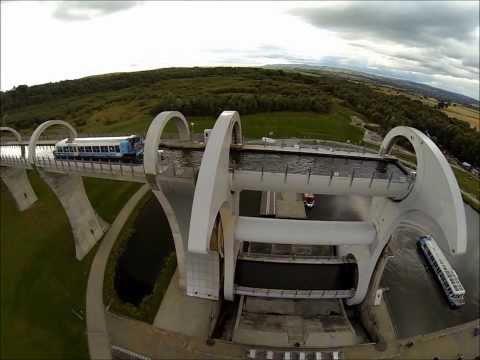 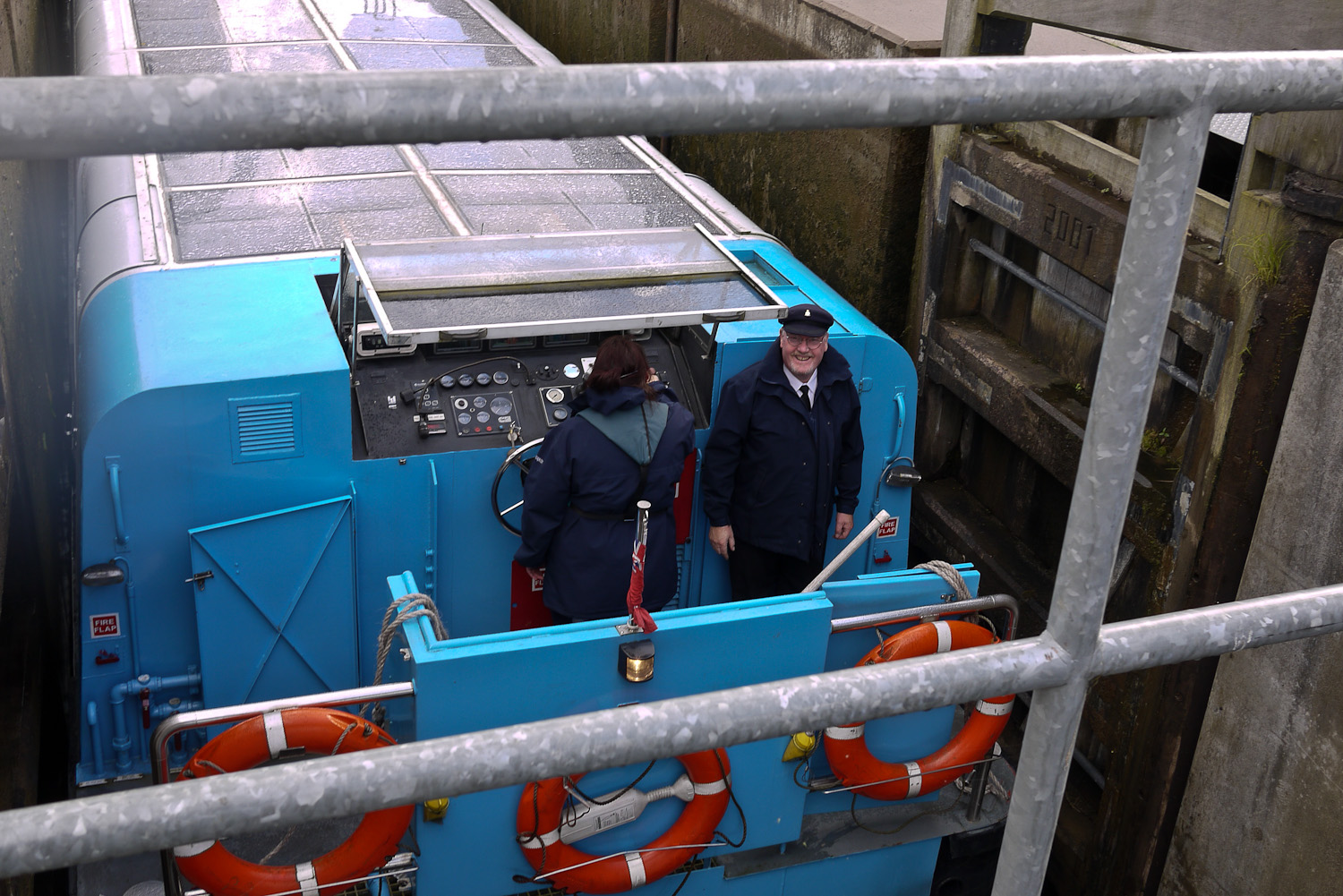 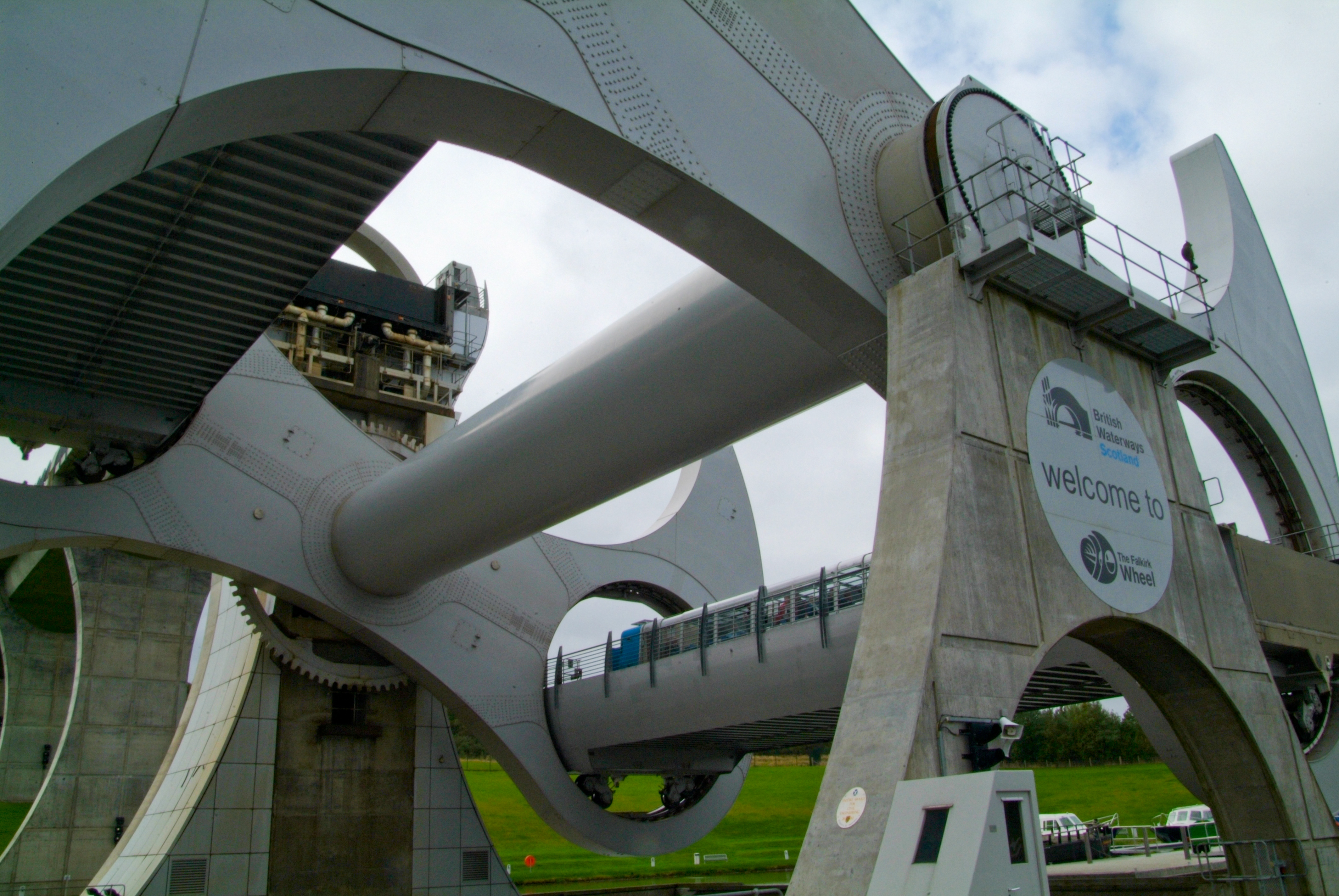 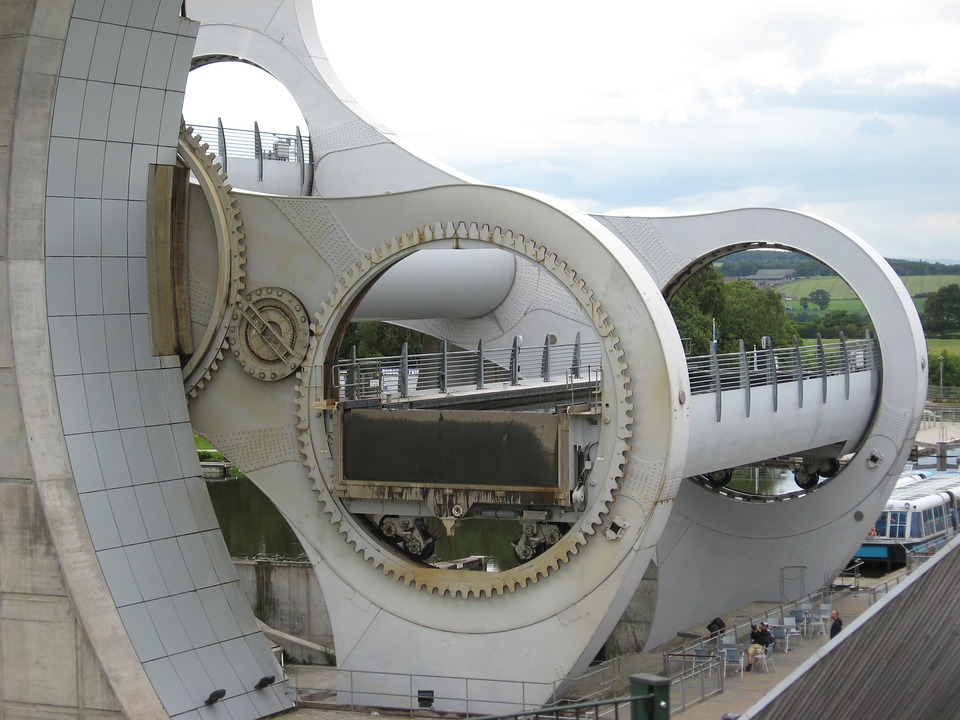 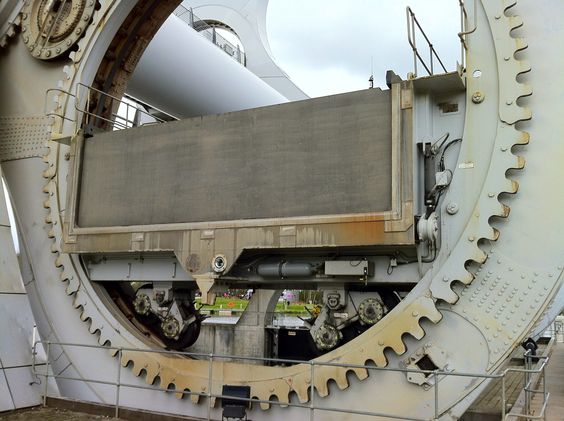 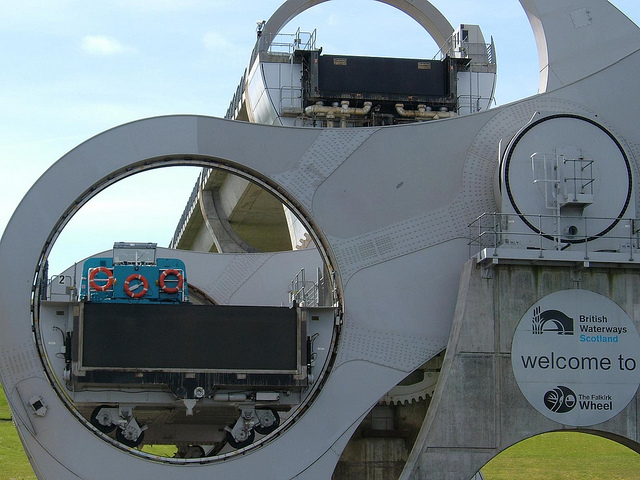