Designed by Slovenian architect Saša J. Mächtig in 1966.
The project was patented in 1967 and production began in 1968..

The K67 is a kiosk designed 1966 by the Slovenian Designer Architect Saša J. Powerful
This product, also called ” Multifunctional unit”, was manufactured in reinforced polyester

L & rsquo; history of the modular design mass produced in years 1960,
which is actually input in the production.

As their name suggests, K67 kiosks appeared in 1967 and were a sign of the modern city, primarily selling newspapers at a time when they were widely read. The K67 design was available in red, green and orange, and additional units could be added according to the spatial needs of the suppliers. Their production ended in 1999. For thirty-two years, 7500 kiosk units were manufactured. The kiosk in front of the Rilindja Media Tower is one of the last to be found in the city of Pristina.

The design is based on polyfiber reinforced modules, which can be used as individual units or combined with large agglomerations. It can perform many different functions; throughout its history, it was used for newsstands, parking booths, copy shops, market stalls, shelters, chip shops, student cafes and lottery stands. It appears in different color combinations (red is the most common), and it is easily visible and accessible. The modular design of the units allows the K67 to adapt to almost any location.

Its system is based on poly-fiber reinforced modules, that could be used as single units or combined for large agglomerations. He lives in cities as newspaper kiosks, parking kiosks, copies of stores, market stalls, d & rsquo cabins, shelter, stalls, d & rsquo cafes, students or lottery booths, easily visible and accessible, different colors and combinations. The unified functional design of the units allows them to adapt to almost any location and context as well as many various functions.

With the & rsquo; courtesy of the Museum of Architecture & Design, Ljubljana

The K67 kiosk is an internationally renowned industrial facility designed in 1968 by Professor Saša Mächtig. Thanks to its modularity, its flexibility and design system, the Kiosk has become one of the most beloved icons in the history of international industrial design and is reappearing in the urban spaces of Ljubljana, Belgrade, Berlin et New York. The kiosk also lands in Koper, where he will assume the role of new content generator of the city on the initiative of Avtomatik Delovišče until 20 December 2021 on Anton Ukmar Square. The K67 exhibition, which is part of the permanent collection of the Piran Coastal Galleries, takes on a new role in the development of public space in the city of Koper.

From 1968 at 1999, about 7 500 units were produced throughout Yugoslavia. Some of them were exported to Poland, Japan, New Zealand, and Kenya, Iraq, the Soviet Union and the United States. The system allows unlimited configurations and variations, making it perfect for a variety of customizations and programs. The K67 Kiosk can be used for various purposes, from border patrol posts, ski lift ticket offices, florists, retail outlets and fast food stands. After more than 50 years, it is not only always present, because its popularity continues to grow in many cities. The first K67, which became part of the MoMA design collection in New York in 1970, was originally placed on the 53rd Street sidewalk.

the K67 is a kiosk design, introduced 1966 by the architect and designer slsheep Sasha J.. Powerful.

Its system is based on poly-fiber reinforced modules, that could be used as single units or combined for large agglomerations. He lives in cities as newspaper kiosks, parking kiosks, copies of stores, market stalls, d & rsquo cabins, shelter, stalls, d & rsquo cafes, students or lottery booths, easily visible and accessible, different colors and combinations.

With the & rsquo; courtesy of the Museum of Architecture & Design, Ljubljana

The concept of BIO 50 was designed by the Belgian curator Jan Boelen, which is the center of the & rsquo; event instead of traditional d & rsquo presentations brand items made some universal dilemmas of society and the & rsquo; environment. They undertook the thematically divided into eleven sections: Affordable Living, know your food, public water public sector, walking around town, l & rsquo; hidden crafts, System Mode, hack appliances, engine block, and observe the universe and the formation of life.

The oldest international biennial of industrial design in the world, BIO Ljubljana, which will be officially opened, the Museum of & rsquo; architecture and design (MAO), is already fifty exciting event. The first, in 1964, drew & rsquo; attention like the junction of the design of the & rsquo; East and & rsquo; West, and this year as a difficult conceptual event. With concerns of skeptics that & rsquo; a radically different concept of BIO 50 Biennial too much deviation from the original mission of Saša Mächtig , architect, Designer and member of the International Jury, disagrees. His 50 years of design overlap the 50th anniversary of the Biennale. The link of the Jubilee Biennial with the past is an international color, in principle, Industrial Design, only the content is different from that used in the past.

since February, he studies and designs ideas 120 designers and representatives d & rsquo; other professions 20 pays. They participate in a modern way – around the web, conferences and live conversations. The triennial international jury will evaluate the value of the best ideas of the day & rsquo; opening of the Biennale. What specific design solutions will be offered to the representatives of different disciplines on specific topics, Mächtig as a member of the jury BIO 50 yet that & rsquo; he did not know when we talked to him a few days before & rsquo; opening of the Biennale. Talk about the role of the & rsquo; former Biennale, missed opportunities Slovenia since the & rsquo; independence to build awareness and designing & rsquo; identity, and also on his career. It started about the same time that the first biennial. As the & rsquo; author & rsquo; brand items has been involved in at least seven biennials, for the first time as a student in 1966 with folding drawing table, booth K67 LVS system and shelters postajališčnih received the d & rsquo medals; gold BIO 1973 then in 1981. Both times the very successful international market industrial product series.

Saša Powerful he retired in 2012, and & rsquo; last year, He awarded the title of Professor Emeritus for his contribution to life in the development of & rsquo; University.

K’67 kiosk success story at BIO50 and across Oculus Rift

ICT support the cultural heritage, an interpretation booth K67 (designed by Saša J. Powerful , 1966) using 3D technologies will be presented. The photographic and video material was shot in the Jakopič Gallery in Ljubljana, where the scale model 1:20 Kiosk is presented as part of the Biennale’ Design exhibition (industrial) sure 50 years . The Jakopič Gallery is one of the main venues of the 24th Design Biennale, BIO 50 .

At the Museum of Architecture and Design (MAO) Saša J. Mächtig we tested a presentation of virtual reality of a set of kiosks to’ aide Oculus Rift , a stereoscopic HMD. A virtual visit to the first person makes an immersive exploration of the full-scale booth K67, walking and entering the interior of the object. We are working on this VR presentation (virtual reality) in collaboration with media engineer Žiga Pavlovič. A 3D model of the kiosk of my doctoral thesis is used. An identical composition was printed in 3D for’ Silent Revolutions exhibition : Contemporary design in Slovenia (MAO) . The same printed 3D models, but of different composition, exposed to Jakopič Gallery.

The video equipment and photo was shot by Matej Kristovič . Photos (gallery): Dejan Pestotnik and Kaja AntlejLe eCultValue project is co-funded by FP7 program of the European Commission.

A kiosk has become a beehive in Kromberk, Slovenia , Former Yugoslavia.

The districts of Kensington and Chelsey asked the Heatherwick workshop to develop a new draft newsstands. Distributors will be replaced by kiosks equipped with photos visible from afar.It is made from plastic and fiberglass scratches and fades with age while the flat parts it needs to protect it from vandalism force the kiosk to the shape of a box and invite perversely to put stickers or graffiti.

The stepped shape of the kiosk comes from tiered levels that keep stores up, where they can be left overnight, ready for the next day. Its top floor is a window that brings natural light inside the booth and allows light to shine out of the booth the night, which gives the impression of being a pilot for the street.

We have set ourselves the task of designing a newspaper stand that could be installed in a quarter hour and looked for a way to secure the kiosk without dishes shutters or hinged panels. Instead of a door or flap, we gave it a geometry that allowed the curved walls at each end of the booth rotate. Manufactured in bronze, These kiosks can be seen on the streets of the Royal Borough to Sloane Square and Earl's Court. 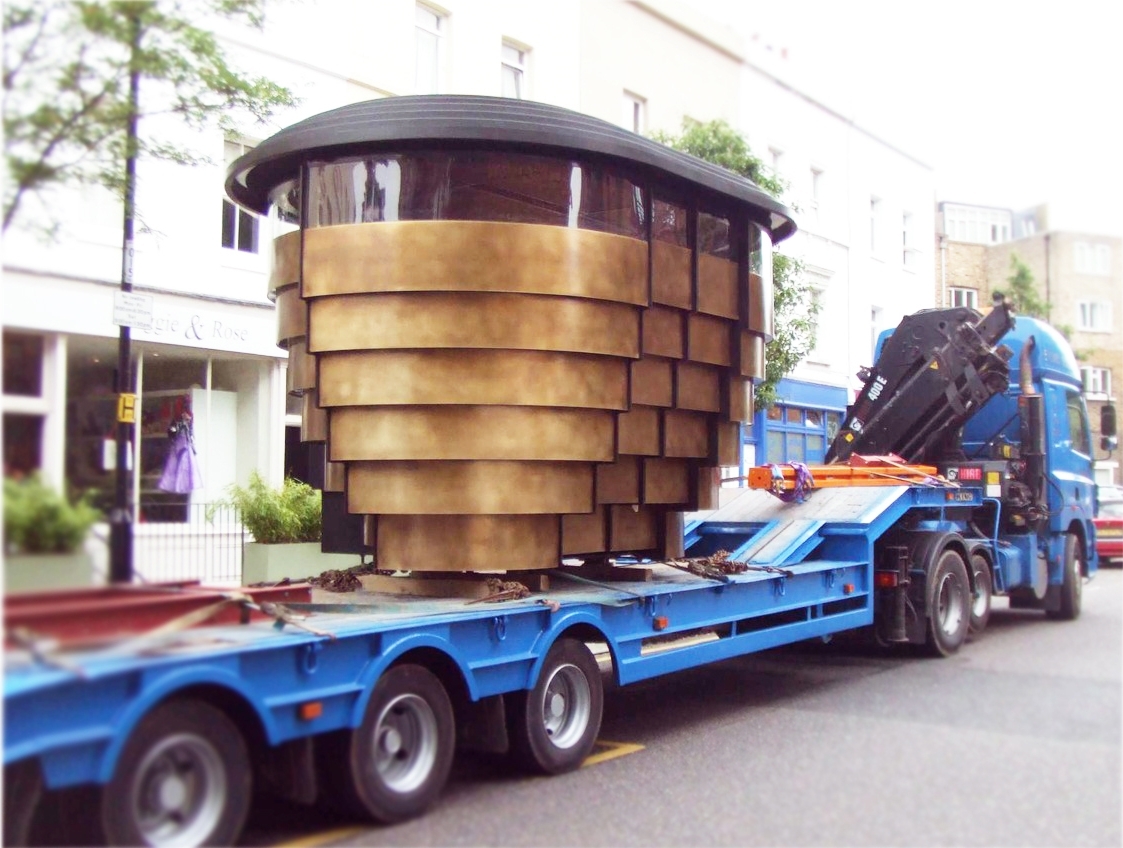 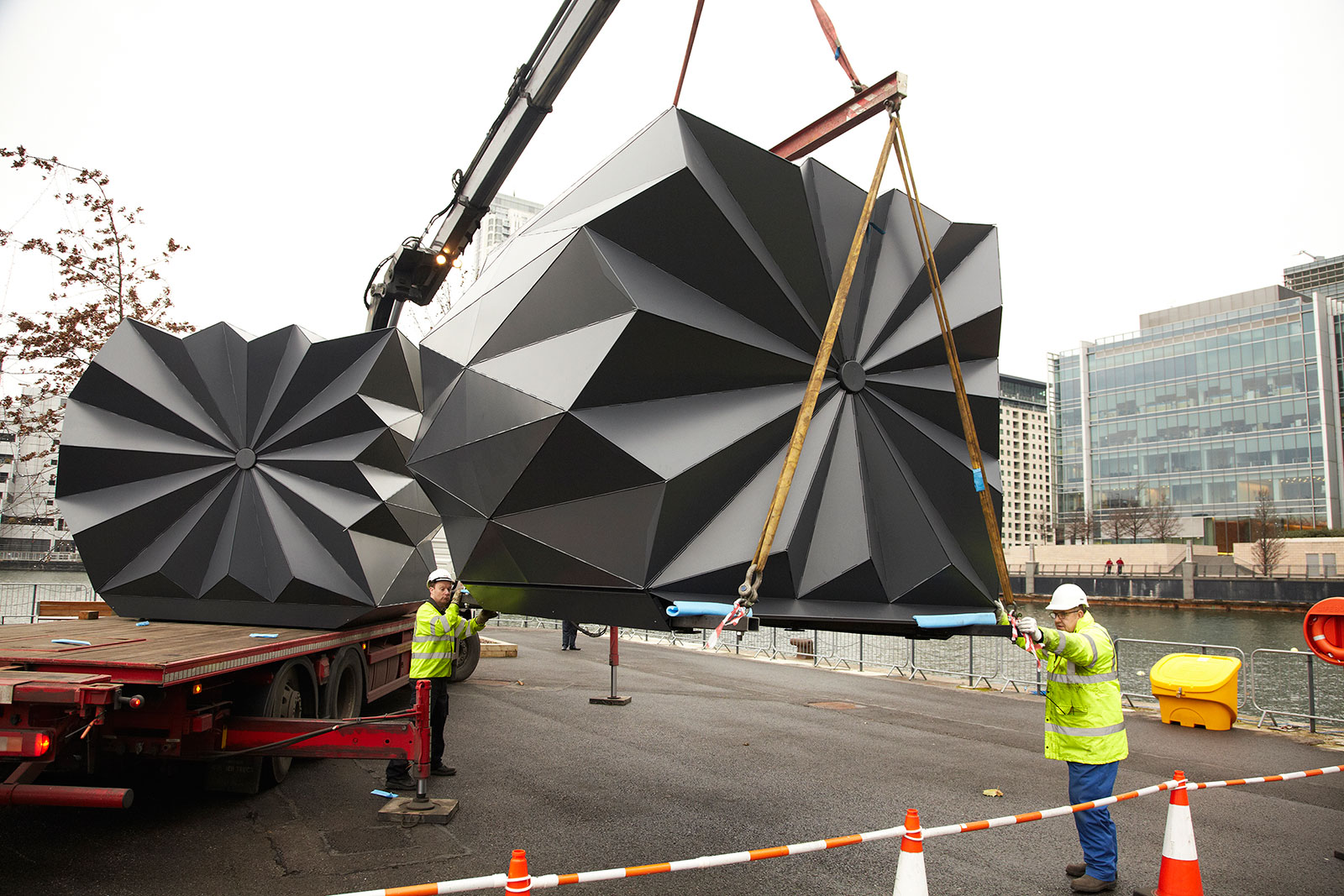 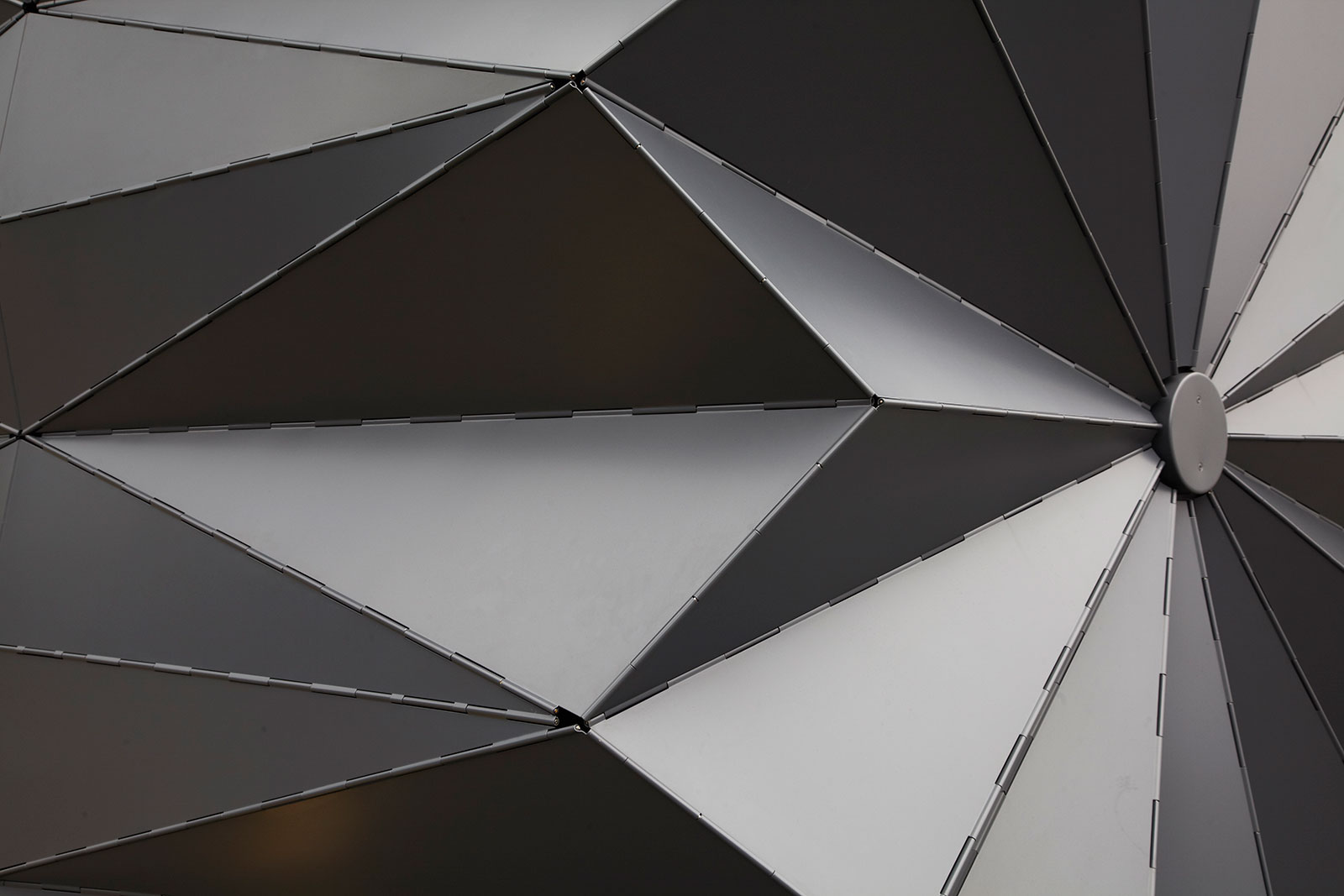 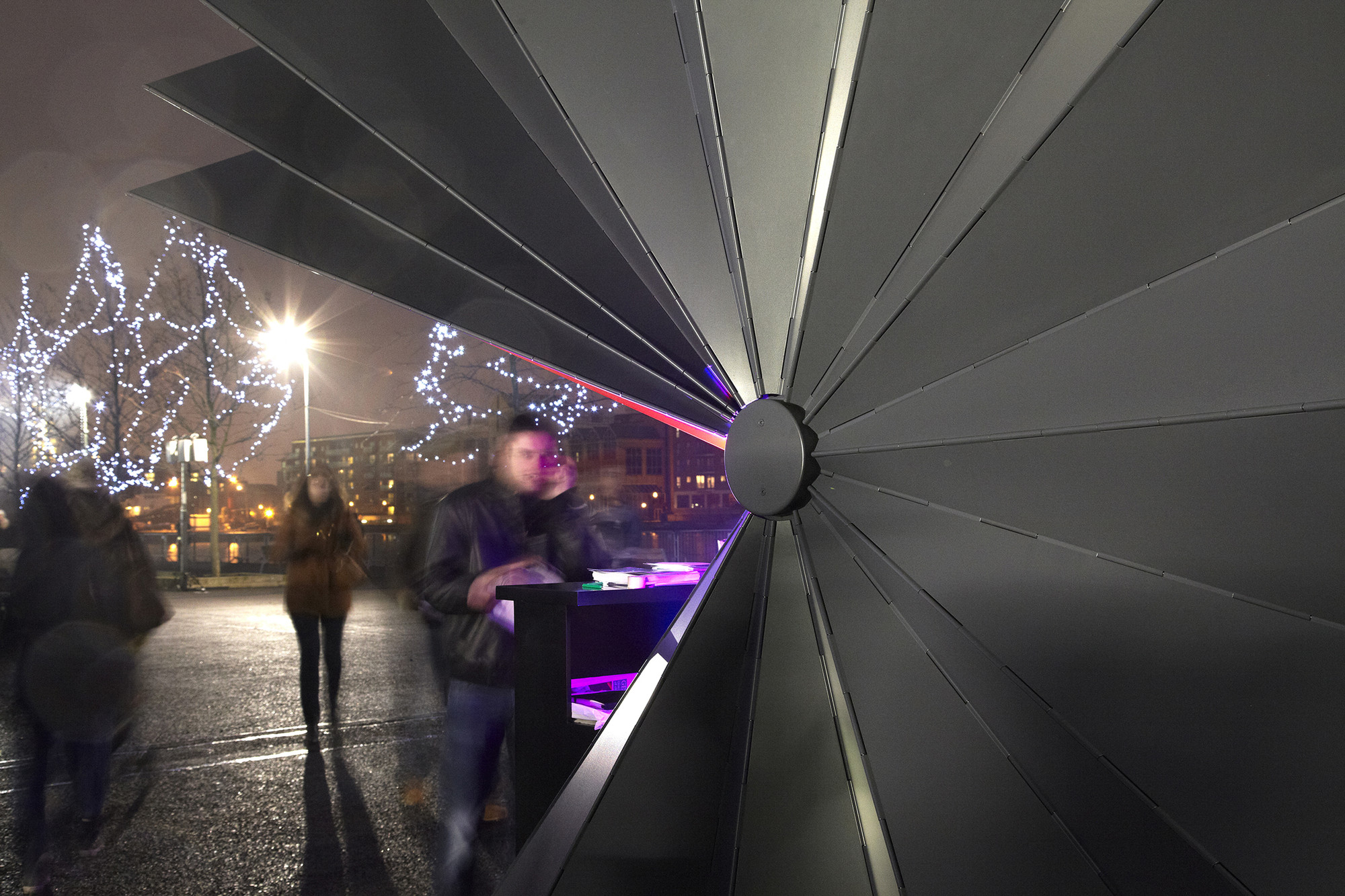 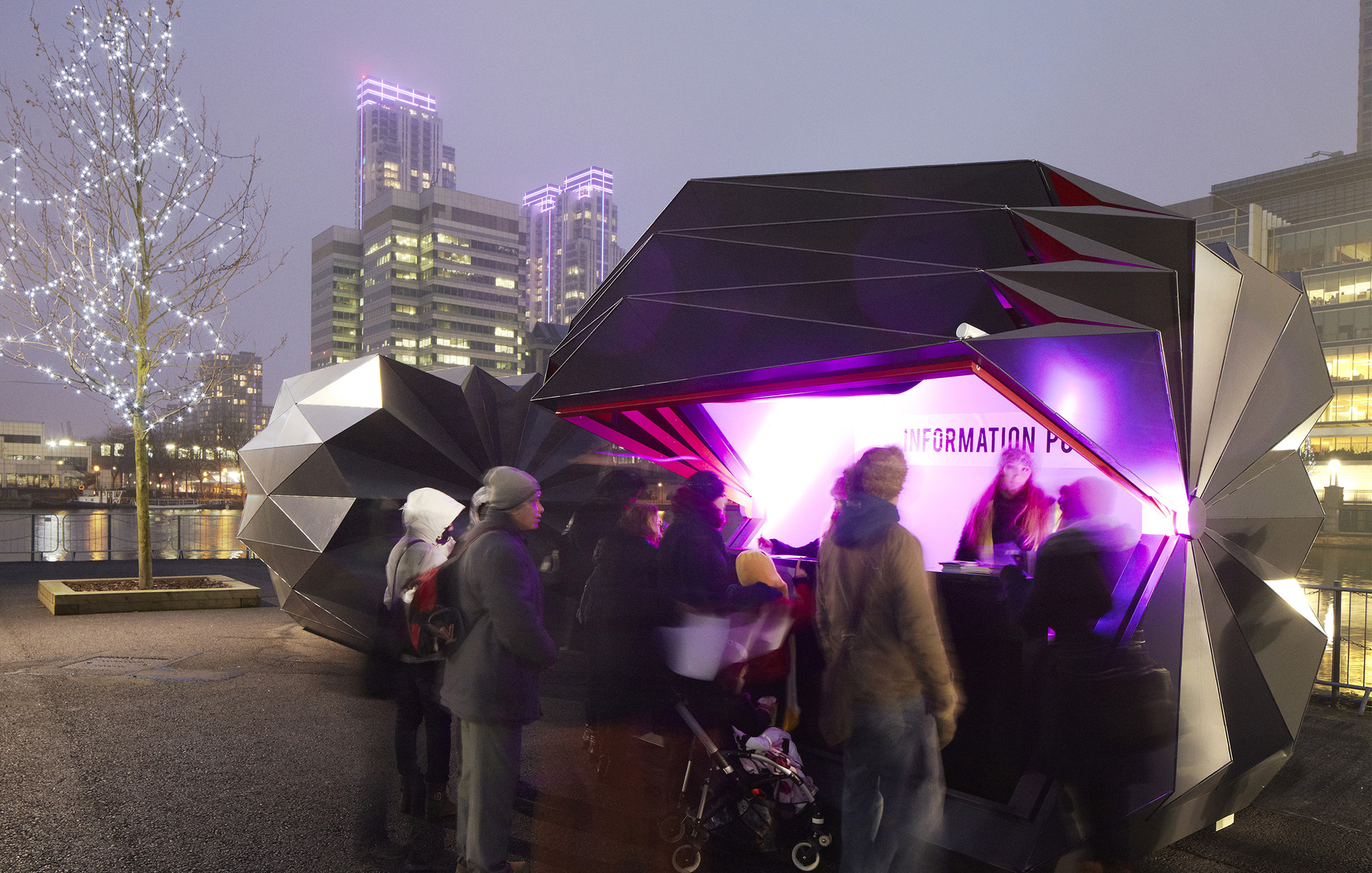 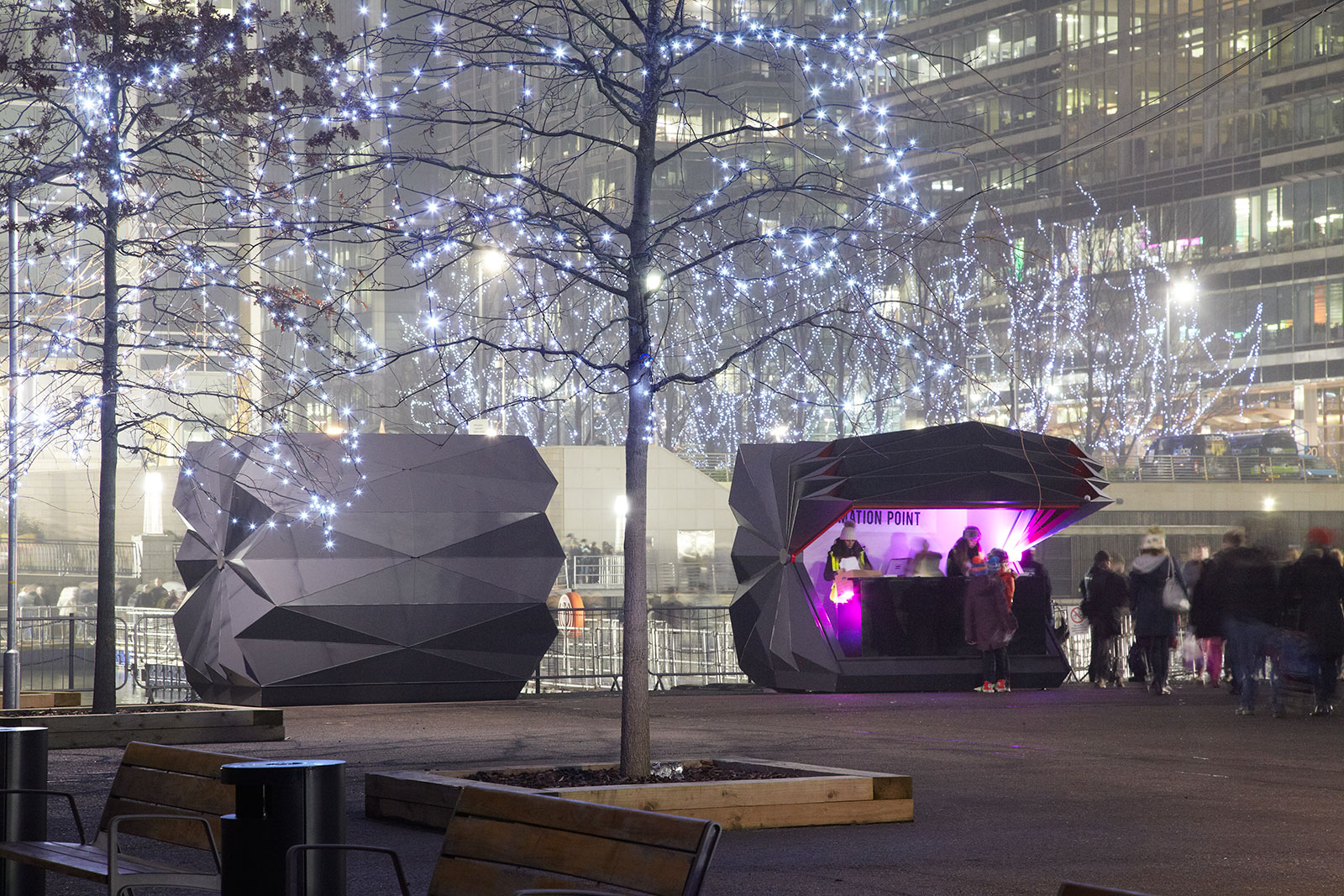