This gem of futuristic architecture is a funicular designed by Zaha Hadid. 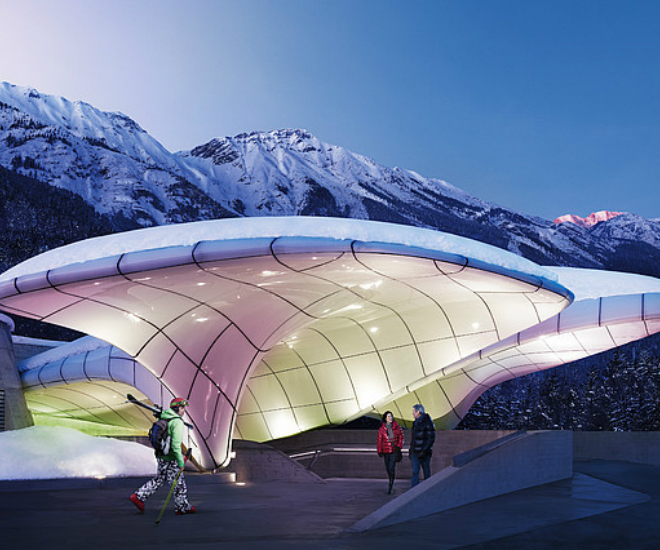 Has a snow white translucent glass roof that has the shape of a bird's wings, this majestic building makes you feel like flying. 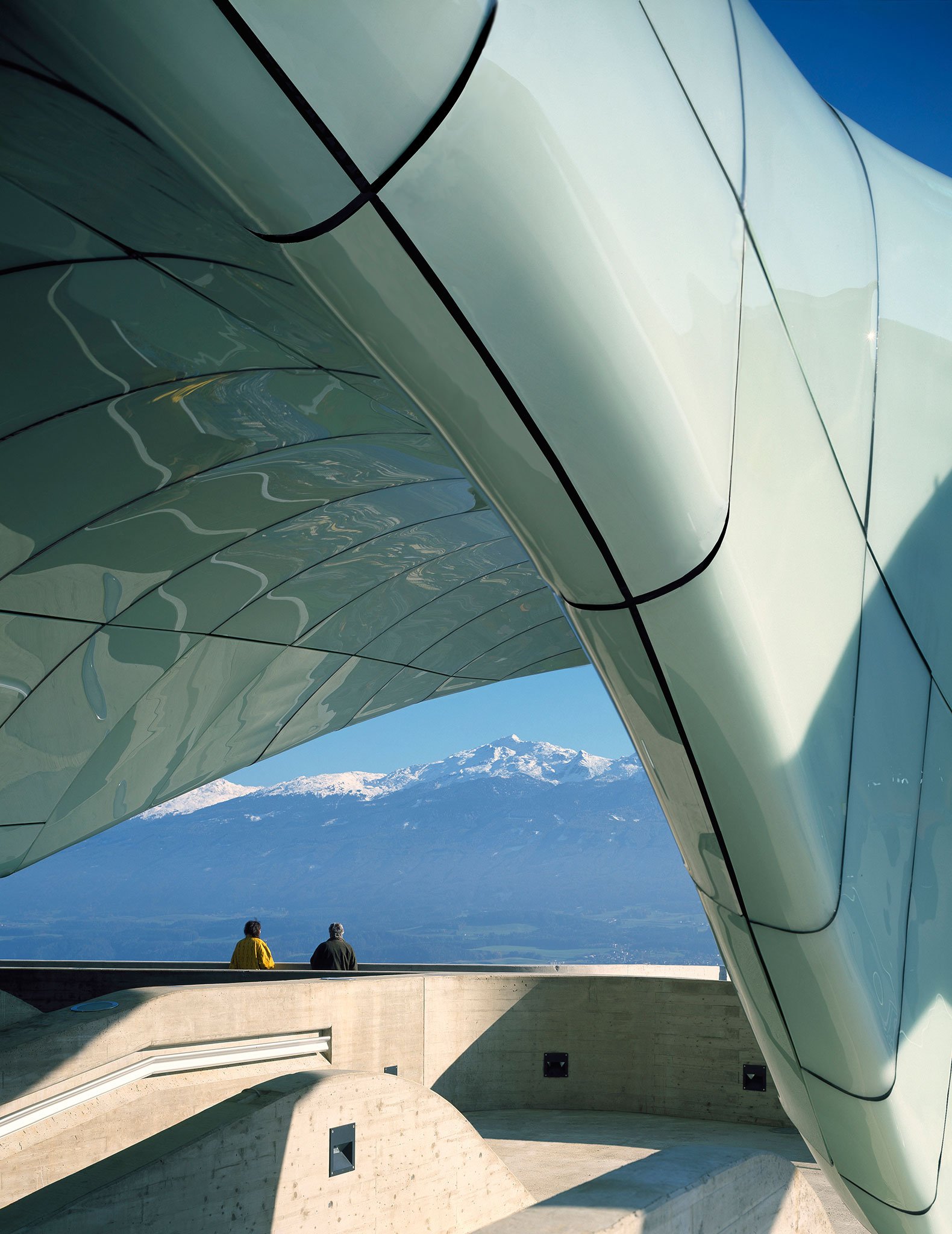 In 2017 only, more than 600 000 passengers traveled between the four stations designed by Zaha Hadid Architects for the Austrian city. Located in a charming natural setting, they are in the heart of the Karwendel Alpine Park, Austria's largest natural park with more than 700 km2 of surface.
Appreciated by locals and tourists….
Stations designed by Zaha Hadid Architects are now an integral part of the cityscape of the city of Innsbruck and have become an important tourist attraction.

Celebrations of the tenth anniversary of the funicular continue until 06 avril 2018 and plan various events including guided tours of the station architectures.

The projects carried out by (Zaha Hadid Architects) for the four stations :
The line connects the center of Innsbruck (Congress station is near the historic center and the Imperial Palace) with the Nordkette mountain range to Hungerburg.

the Congress Center Station in the historic center Innsbruck, two intermediate stations (Loewenhaus et Alpenzoo) and finally the arrival station at Hungerburg are different from each other although they have formal elements in common.

Each station adapts to its unique setting by its topography, its altitude and its passenger route but is also characterized by certain common elements such as the panoramic terrace or the roof which recalls the natural forms covered by the ice, like the ones you can see in the mountains.

Each station generally consists of a concrete base, which contains the passenger flow, on which the light structure of the cover "floats". In 2007, the stations were at the forefront of the construction technique used. Expression of a visionary futuristic architecture, who used innovative design and production methods to translate the project's fluid geometries into constructed structures. Indeed, these were the tallest structures in the world that used double curved glass in construction.

Zaha Hadid's project also introduced an important technological innovation with the development of a new hydraulic railcar tilting system.. New technology makes it possible to exceed the maximum slope reached by the route in the Alpenzoo station, keeping the wagon platform horizontal throughout the journey and ensuring maximum comfort for passengers. Once in Hungerburg, the journey continues with the panoramic cable cars of the Seegrube and Hafelekar railways and the situation begins to change:
carefully renovated station buildings, originally designed by the Tyrolean historical architect Franz Baumann, become the center of attention. As the cable car climbs and gets closer and closer to the top of the mountain, the bustle of the city gets lost in the beauty of nature. 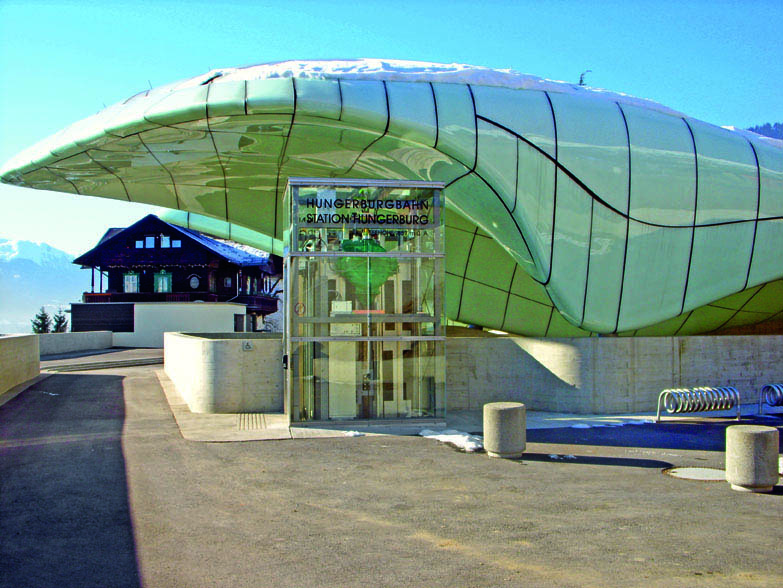 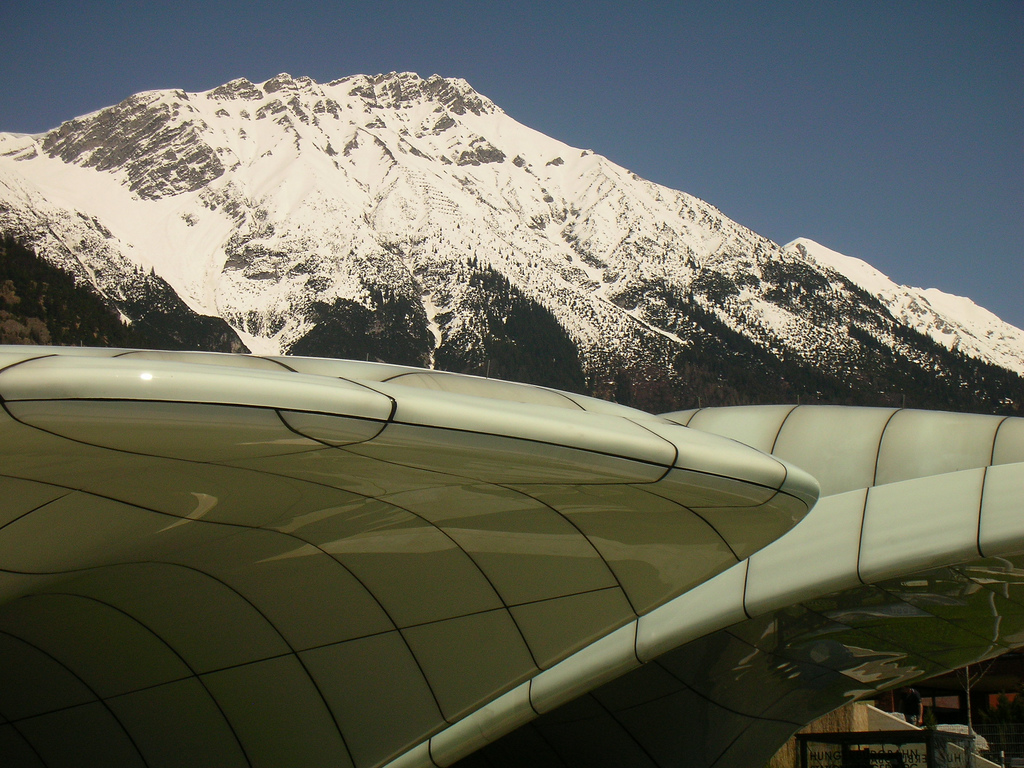 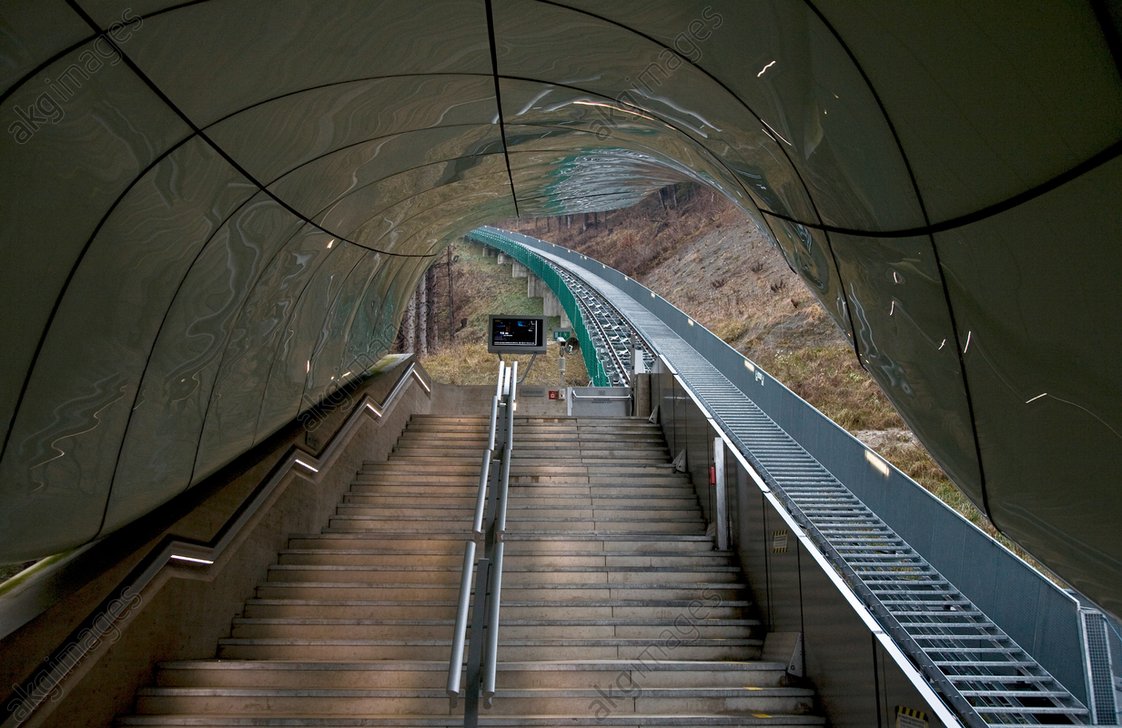 One of Zaha Hadid's masterpieces in Innsbruck, le Hungerburgbahn. The funicular connects the inhabitants of Innsbruck from the city center to the Hungerburg plateau in just 8 minutes. 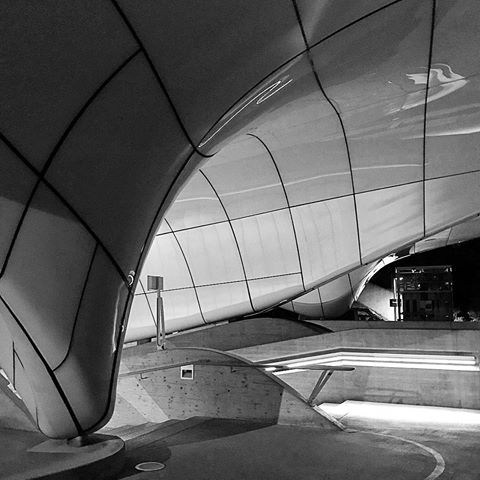 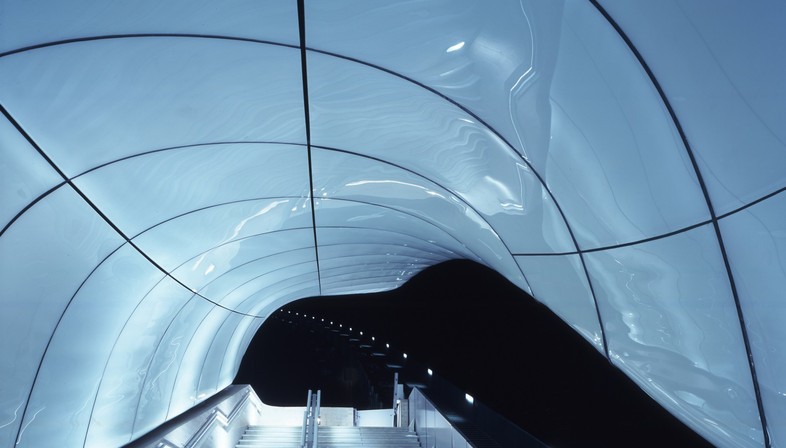 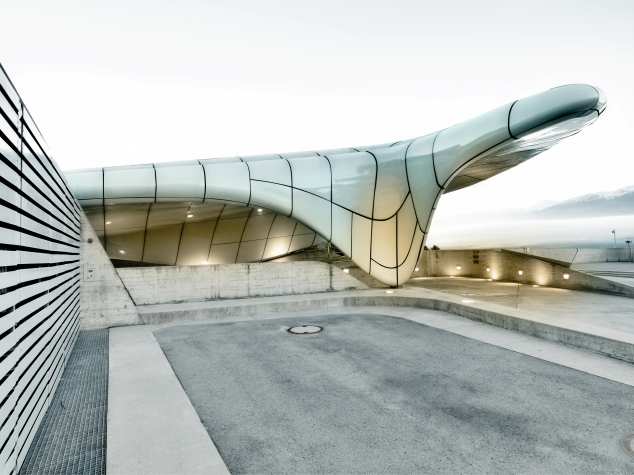 The new Hungerburg funicular was designed by star architect Zaha Hadid and was inaugurated in 2007. The funicular has set new international standards for modern architecture thanks to the extraordinary design of the stations. According to Zaha Hadid herself, she was inspired by the ice and snow landscapes of the region. Consequently, the four stations, Congress, Lion house, Alpine Zoo and Hungerburg look like frozen glaciers, which gives the impression that the nearby mountain is right in the heart of the city. The contrast between the arched shape of the roofs and the solidly anchored concrete bases makes the stations unique and gives them an almost magical feeling of weightlessness. 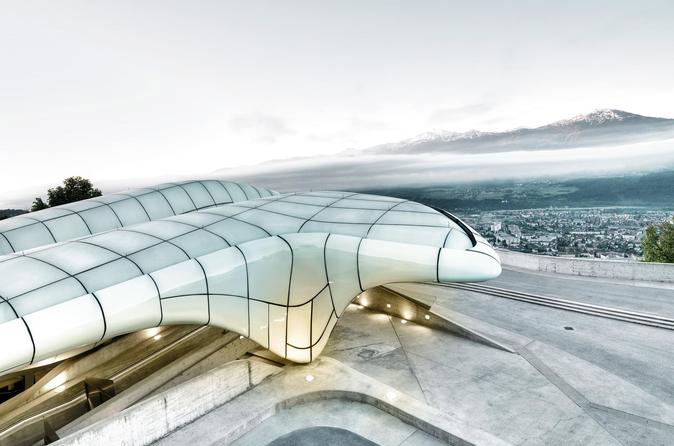 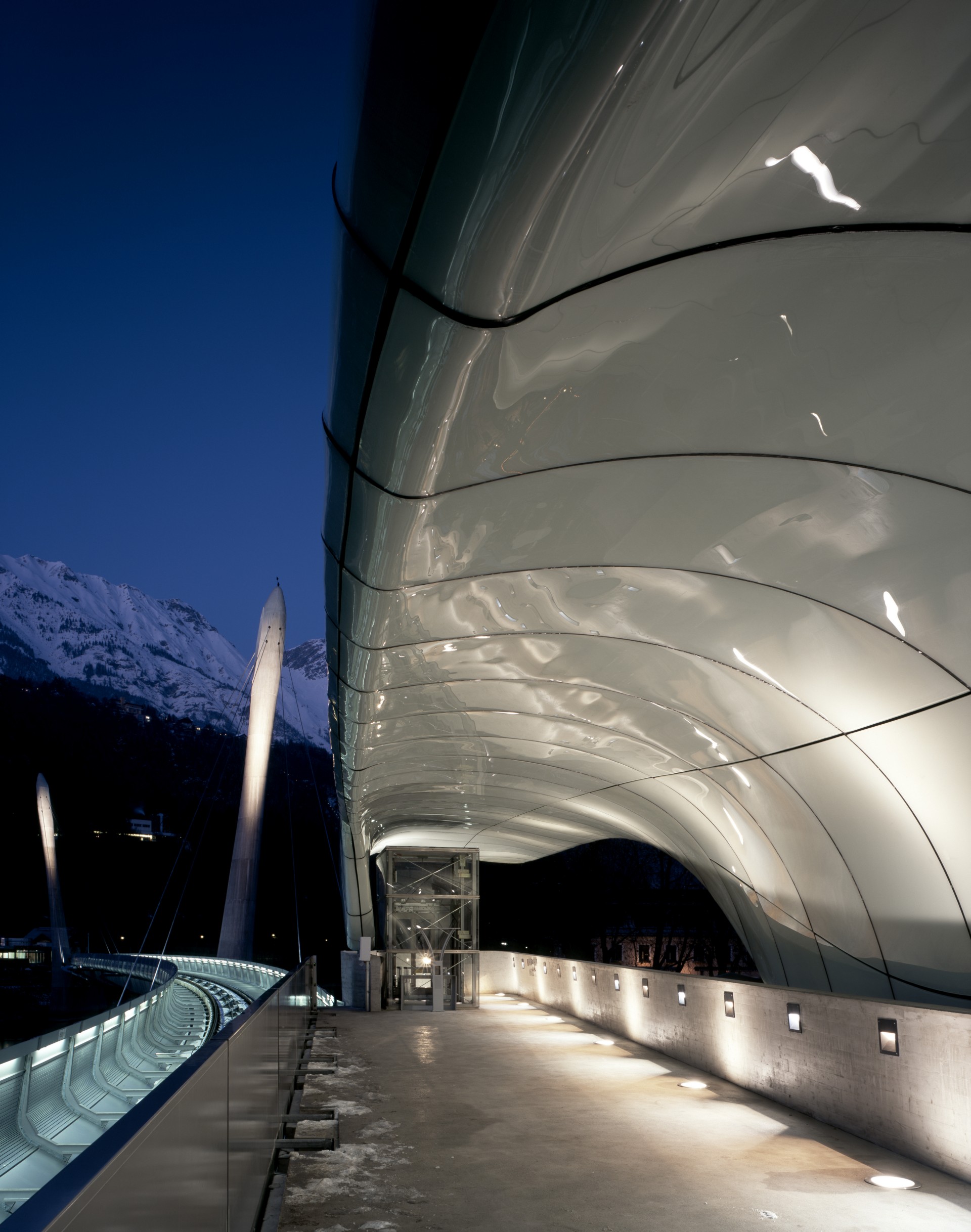 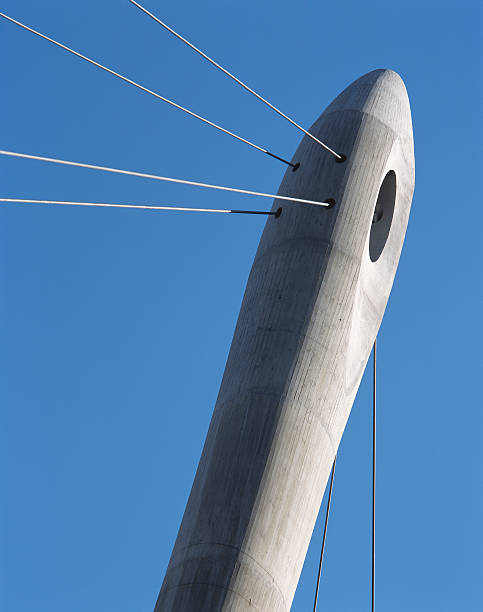 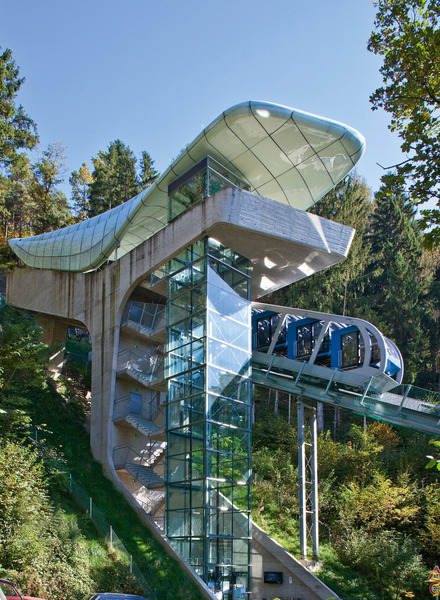 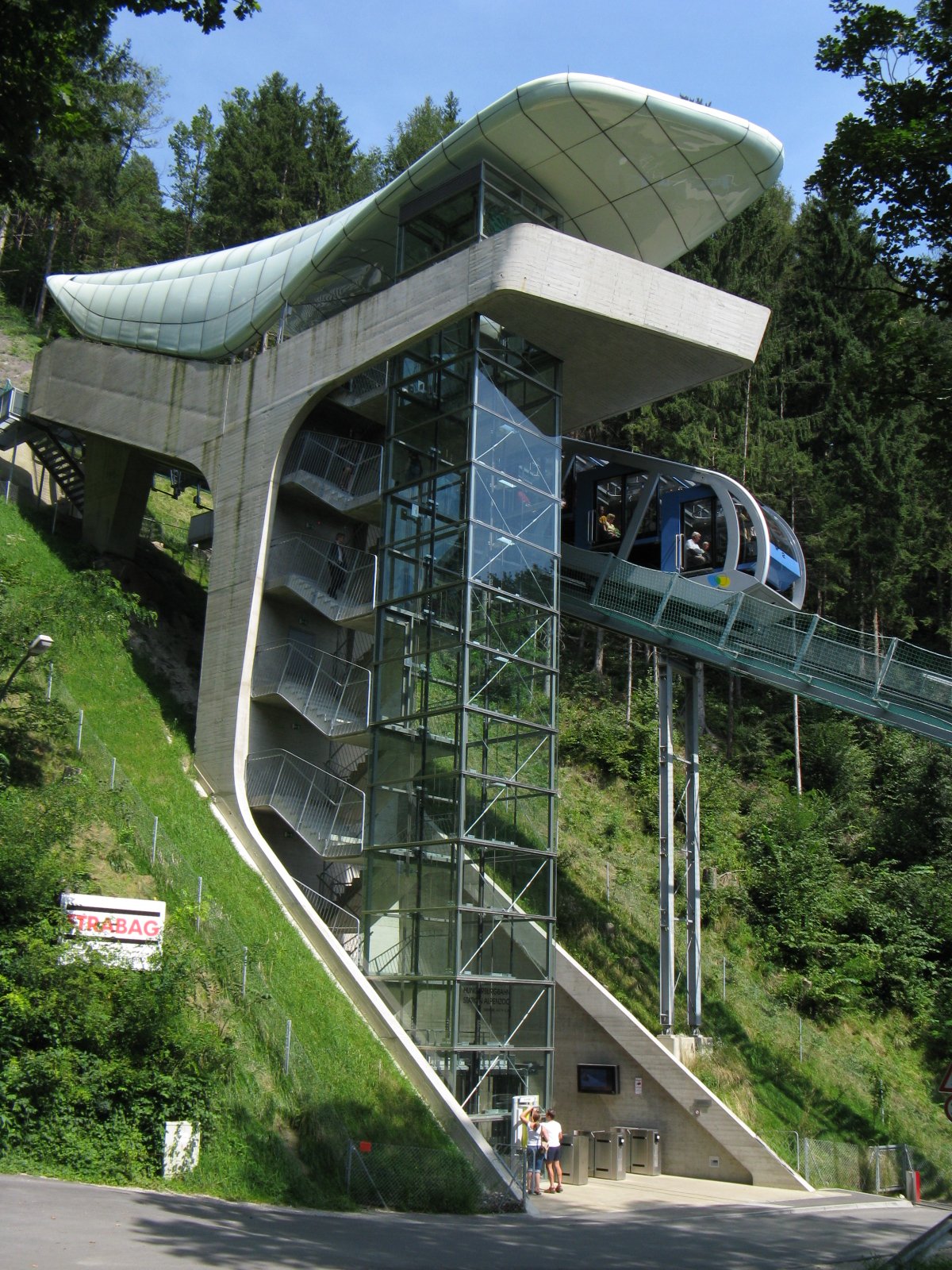 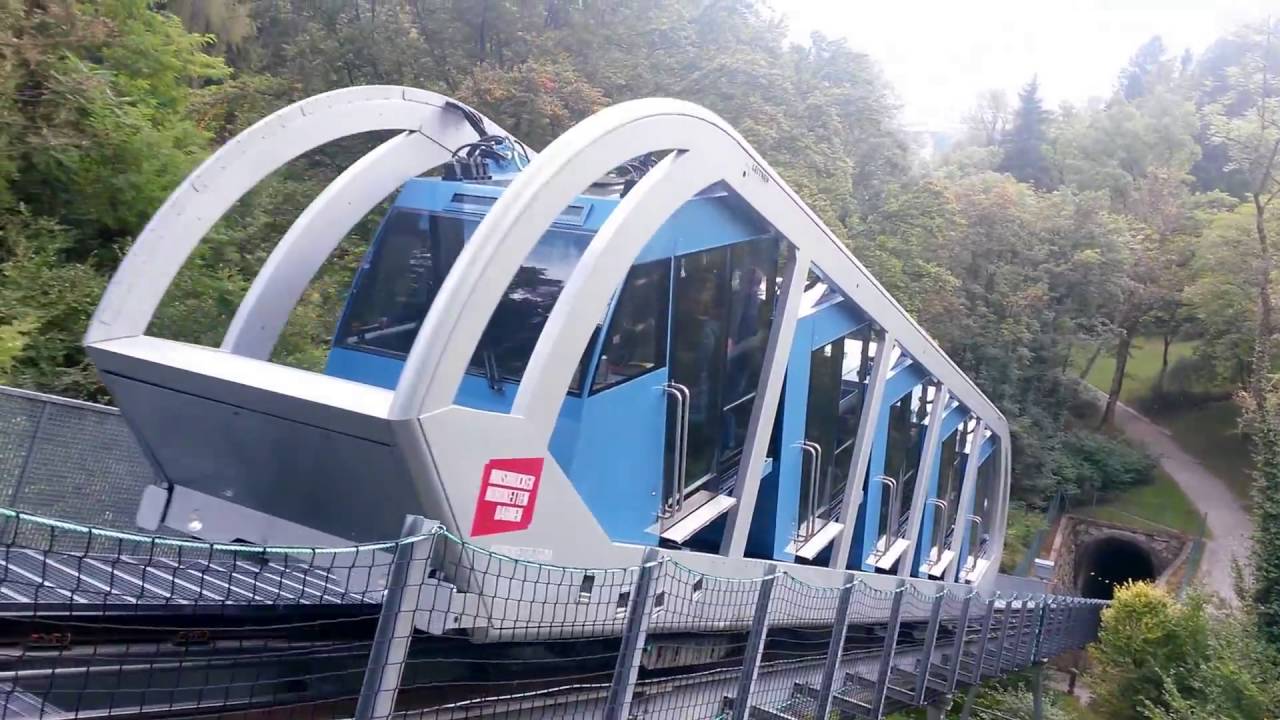 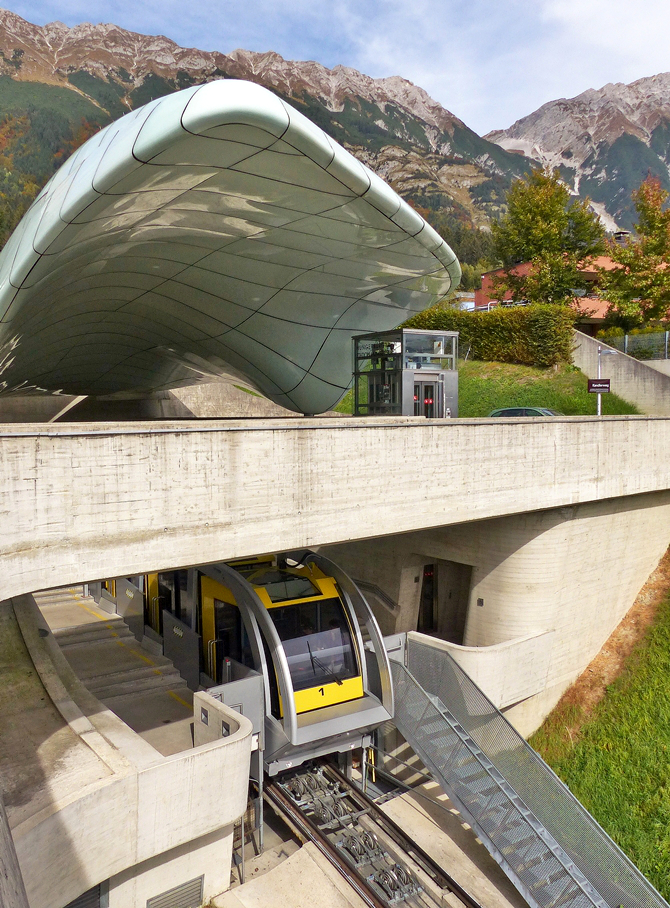 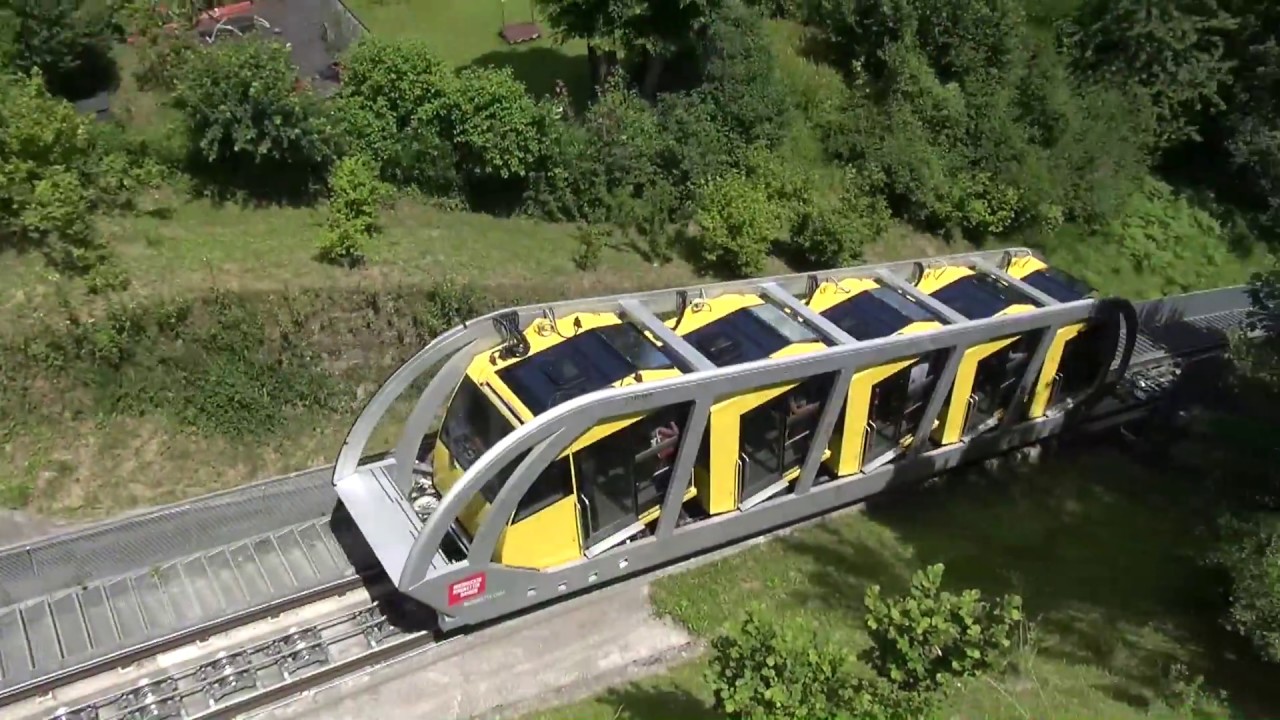 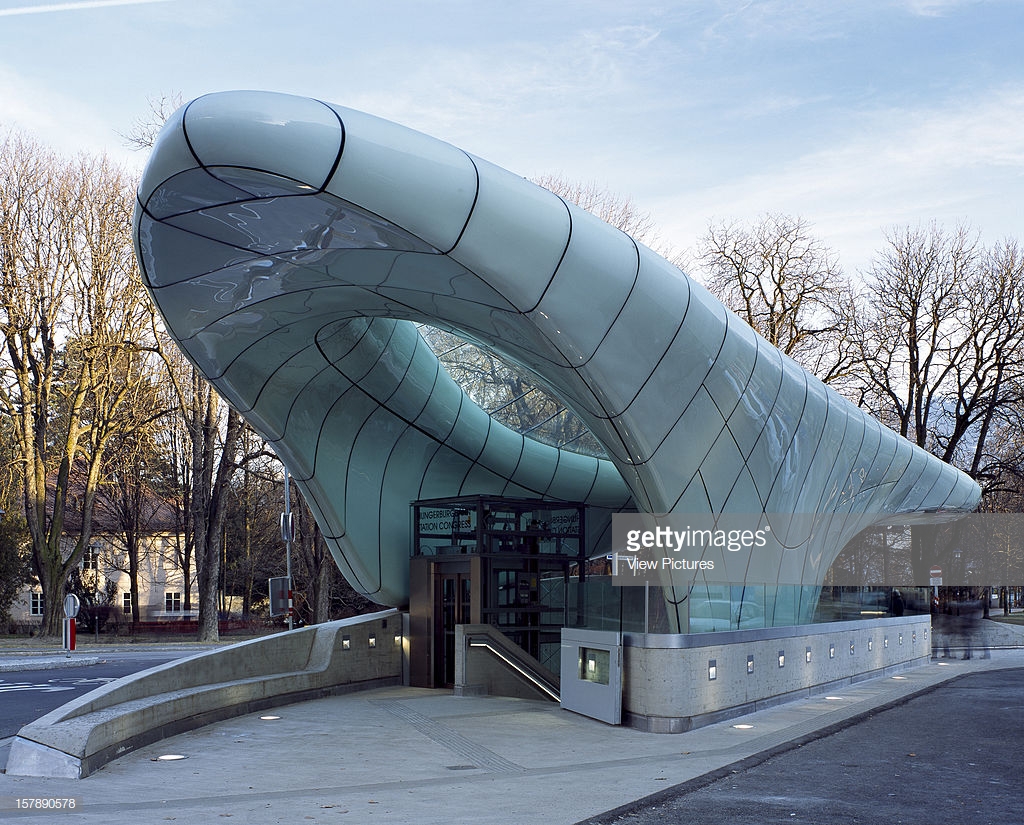 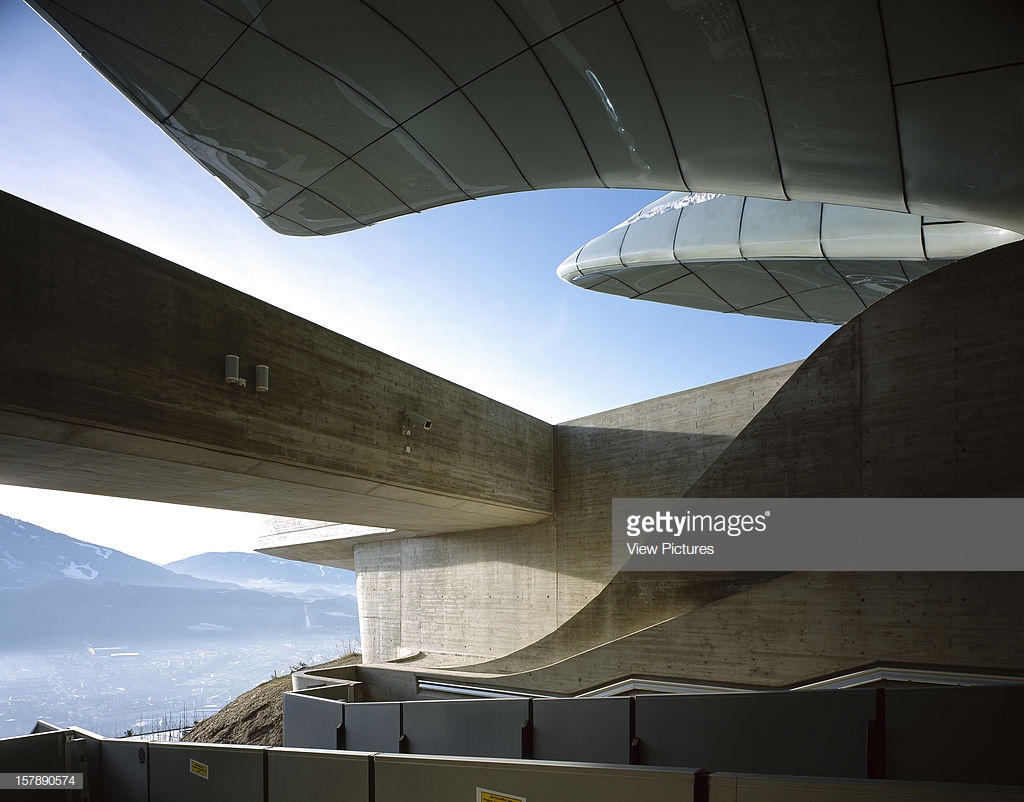 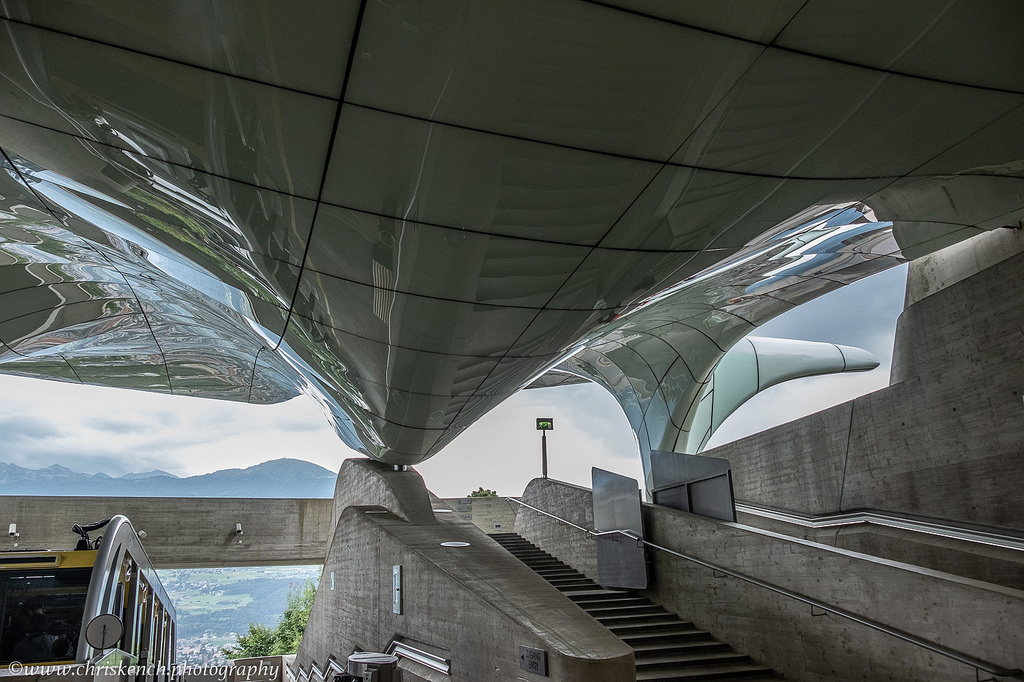 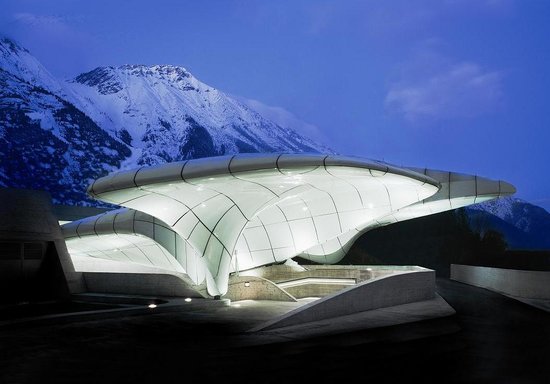 Once in Hungerburg, passengers can continue their journey on the direct cable car to Seegrube, at 1 905 m, then take a second cable car to the Hafelekar in 2 300 m d’altitude, highlight of the Nordkette mountain range. A fascinating journey that mixes architecture and nature, splendid panoramas of the Alps and the city, and that brings the mountain to town. Tourists and athletes can reach high altitudes and ski resorts directly from the city center in a few minutes. 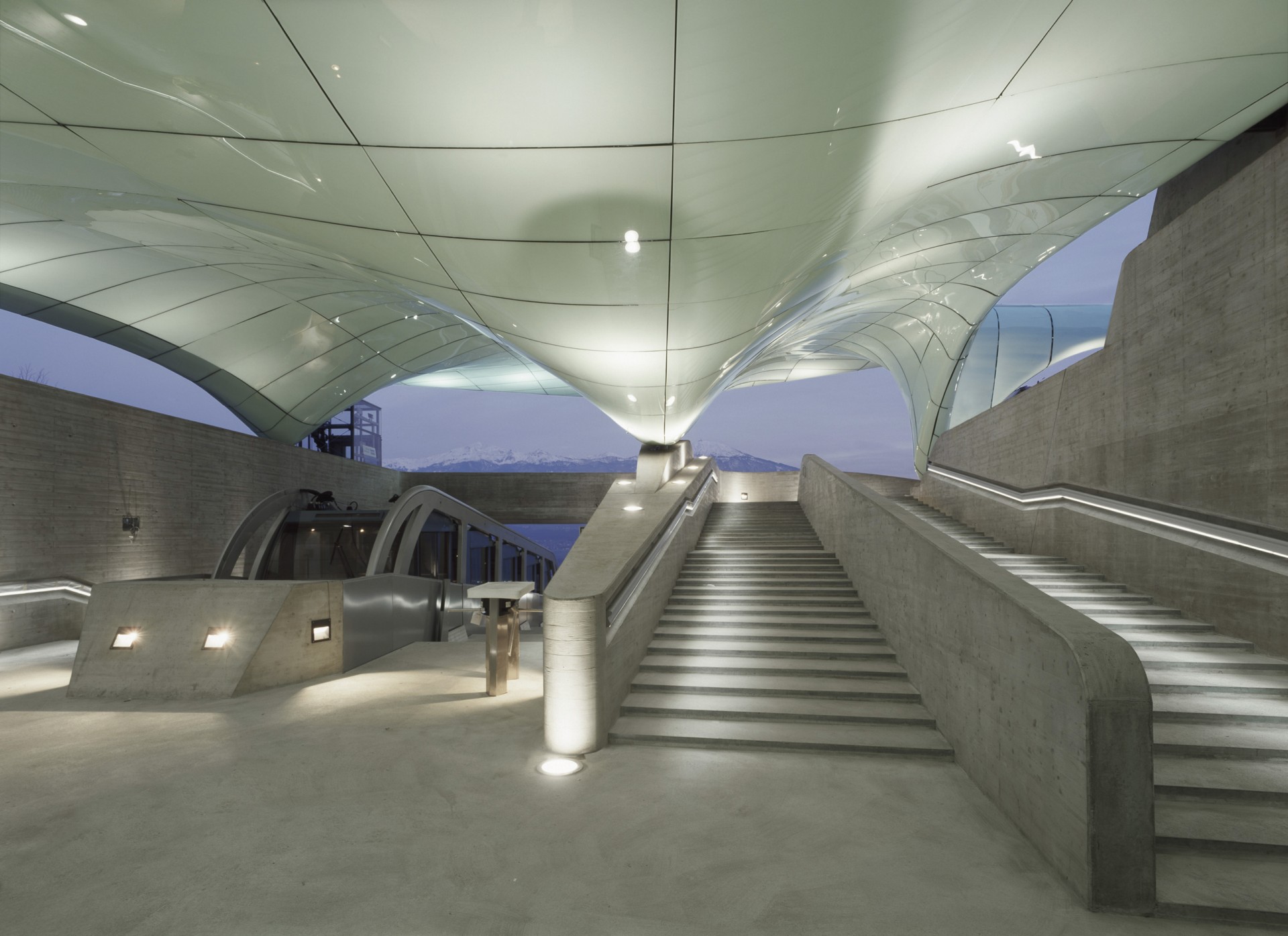 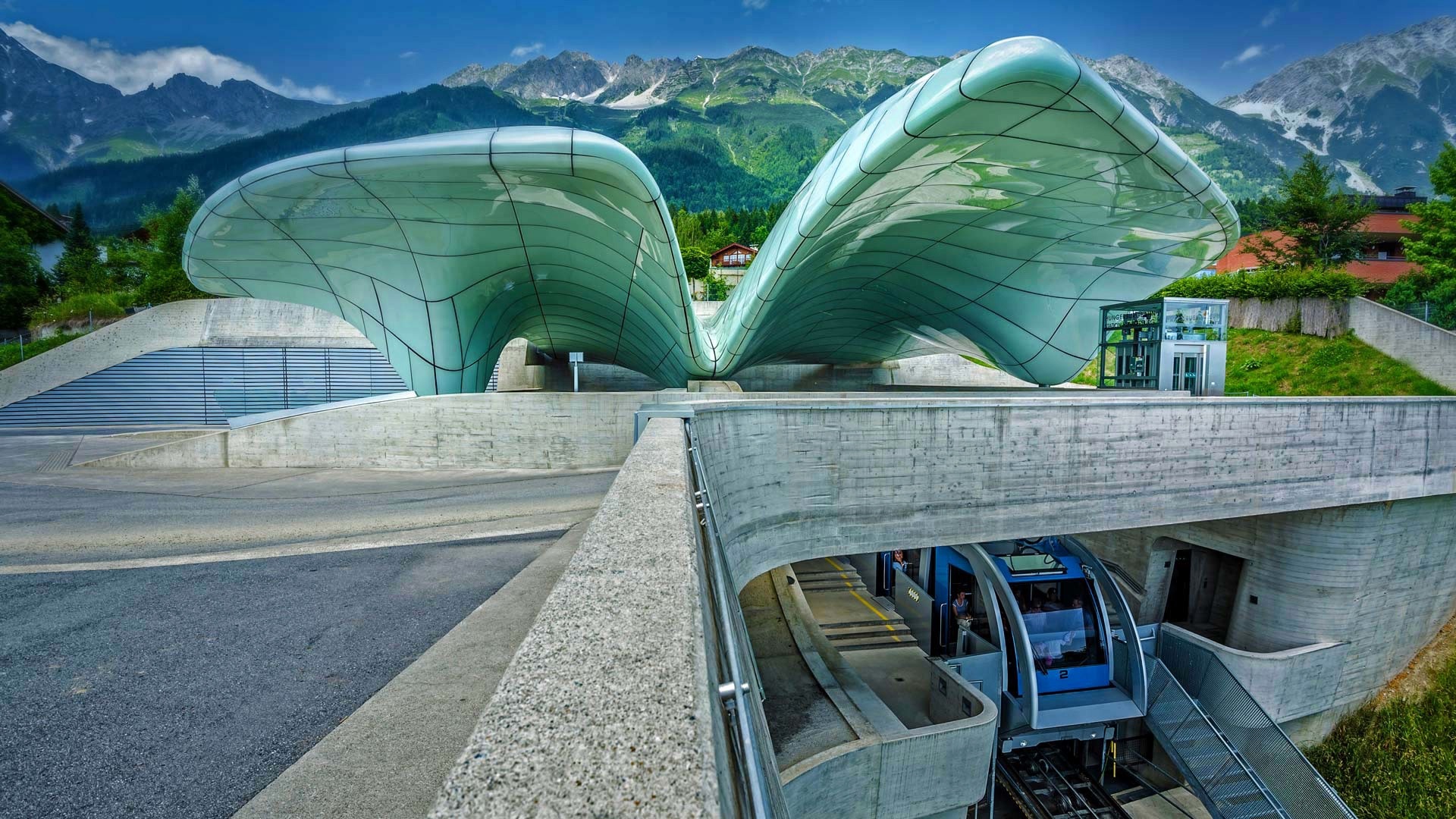 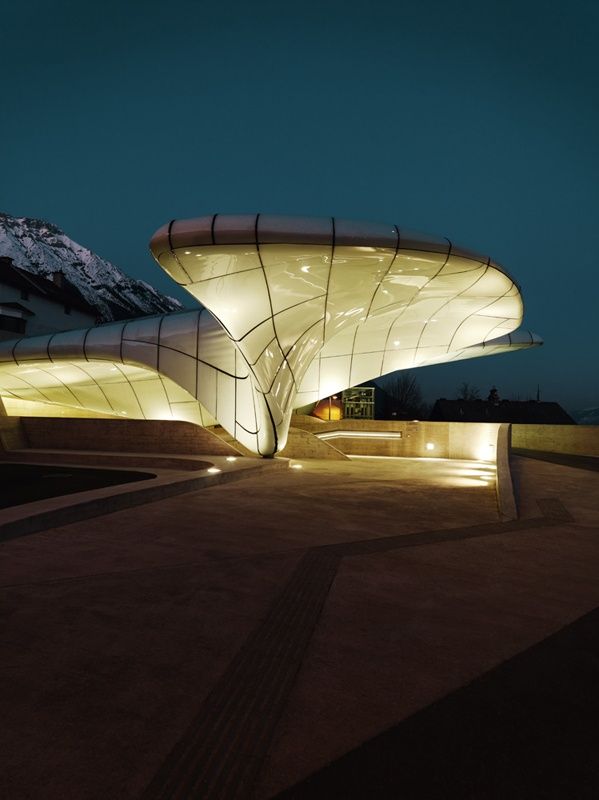 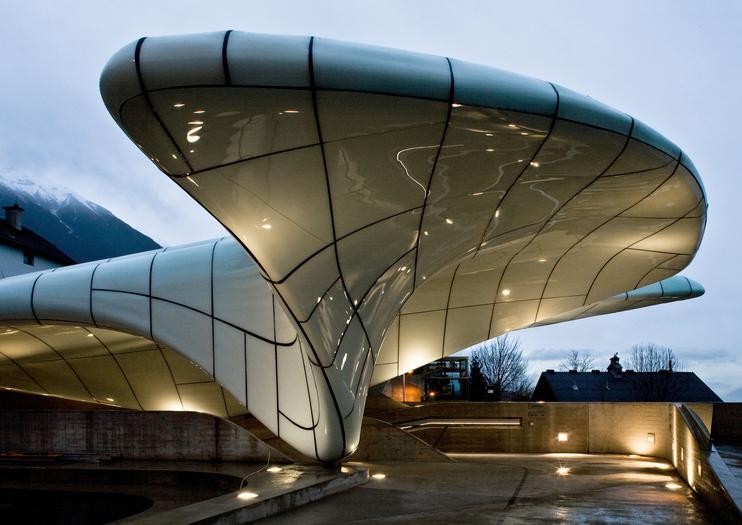 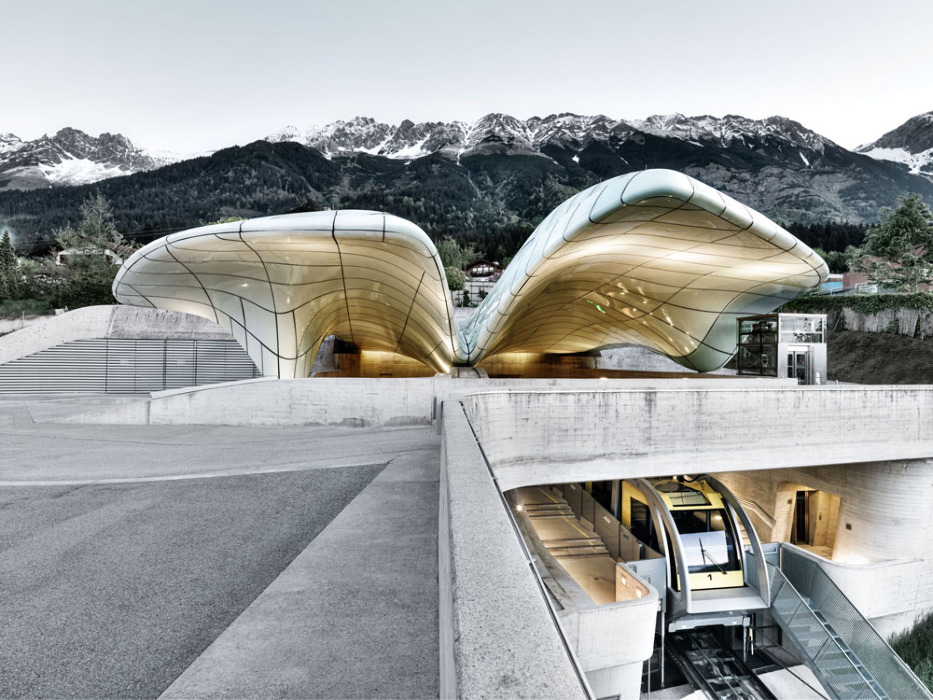 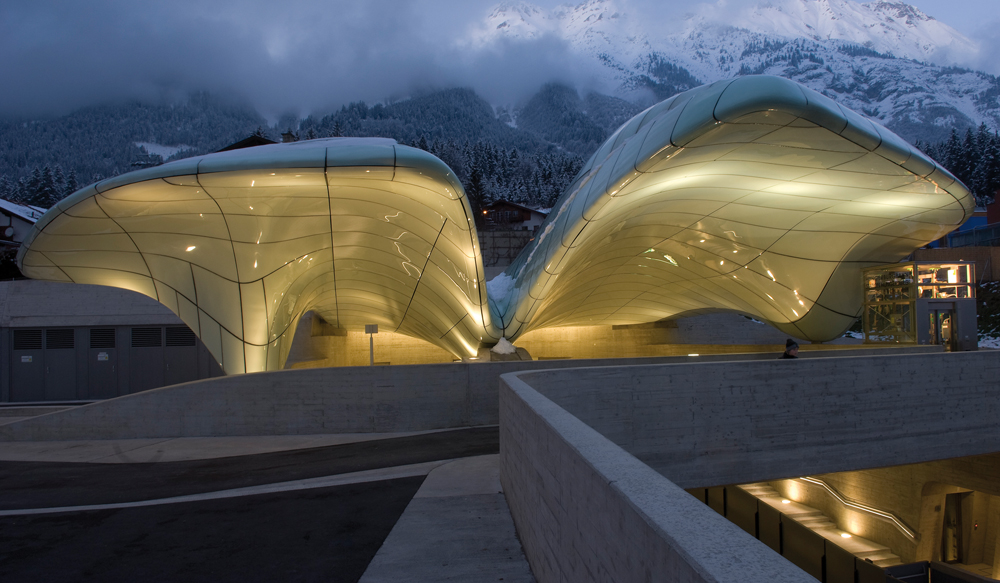 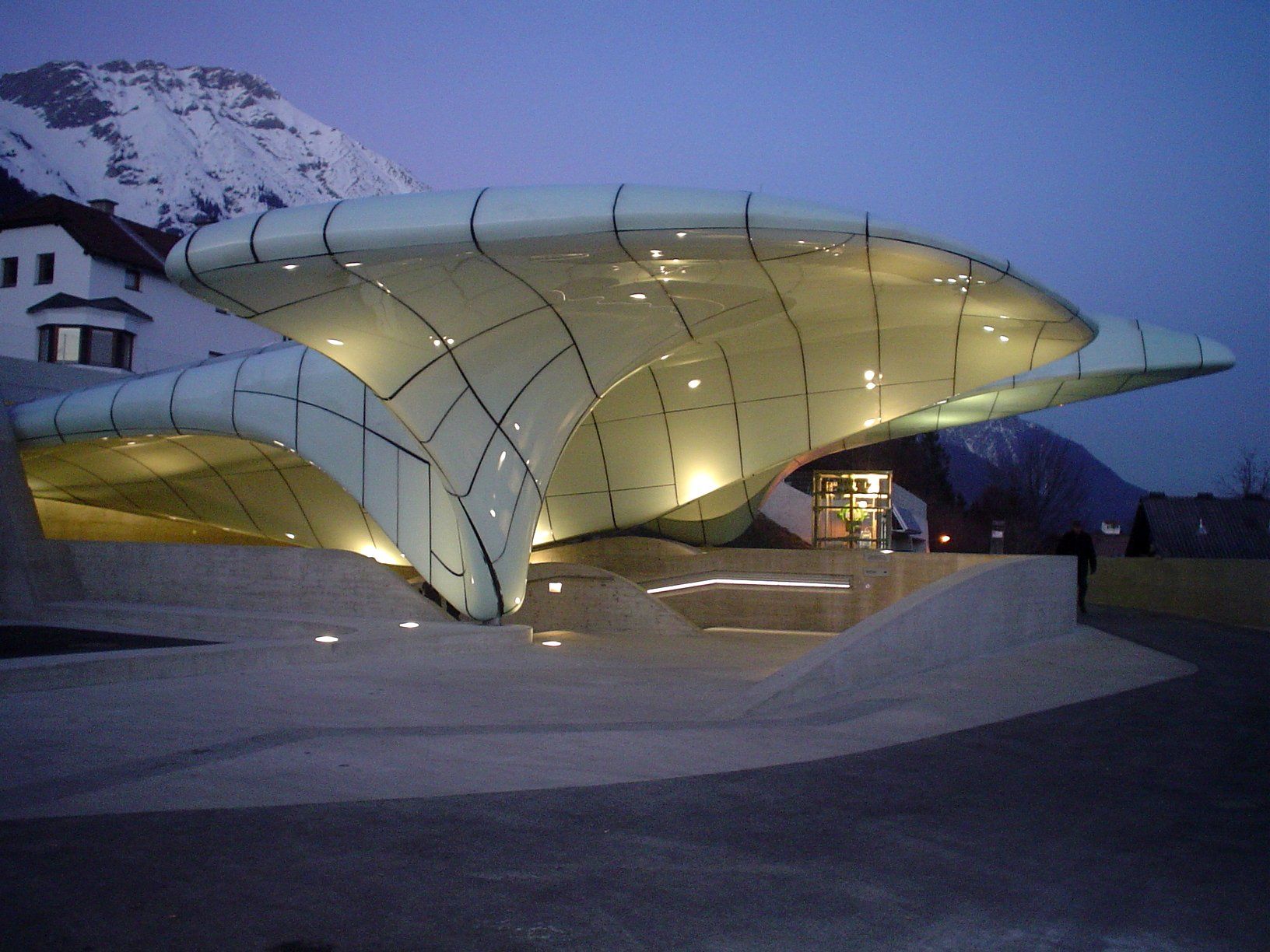