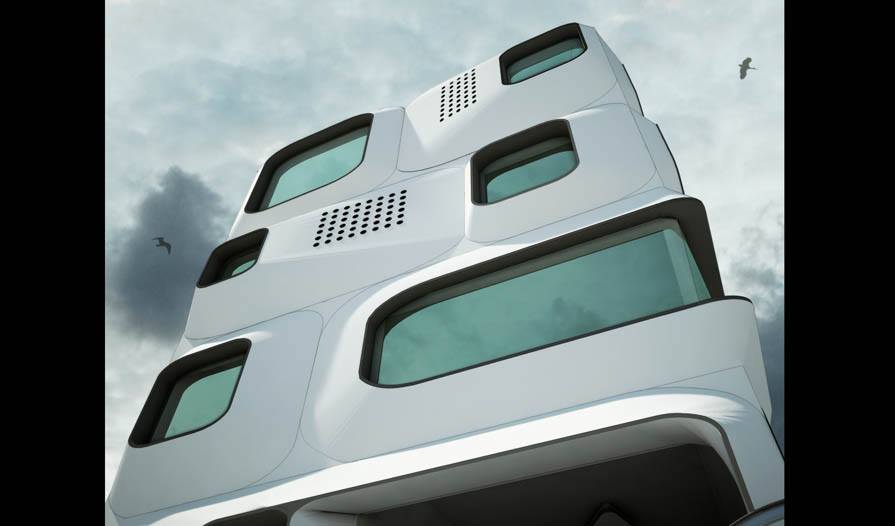 About SDEG office (Sujit Nair Design Group) was founded in 2007 and is currently involved in various types and scales of projects.
Practice is interested in the many opportunities that emerge flows and complex urban travel in the culture, politics, socio-economic models, beliefs and capital systems, resulting in a large architecture circumstances.

In seeking to be still experimental and switch tactics quickly, the design can be released predetermined notions and preservationists – SDEG believes in an architecture & rsquo; attitudes that overlap, technology techniques, which respond to fluid situations and projects of contemporary urban transformations. 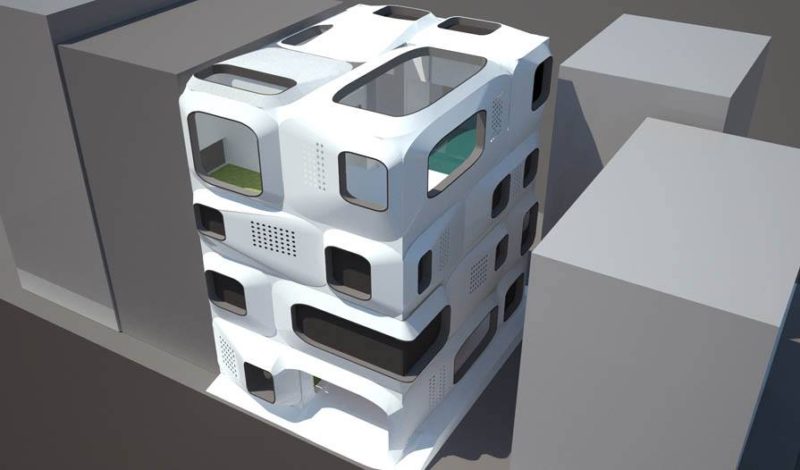 To make a private house located in a densely populated area of ​​the city of Chennai, l & rsquo; individuality, Architects Office SDEG its facade designed in & rsquo; retro-futurism of mind for years 1960. 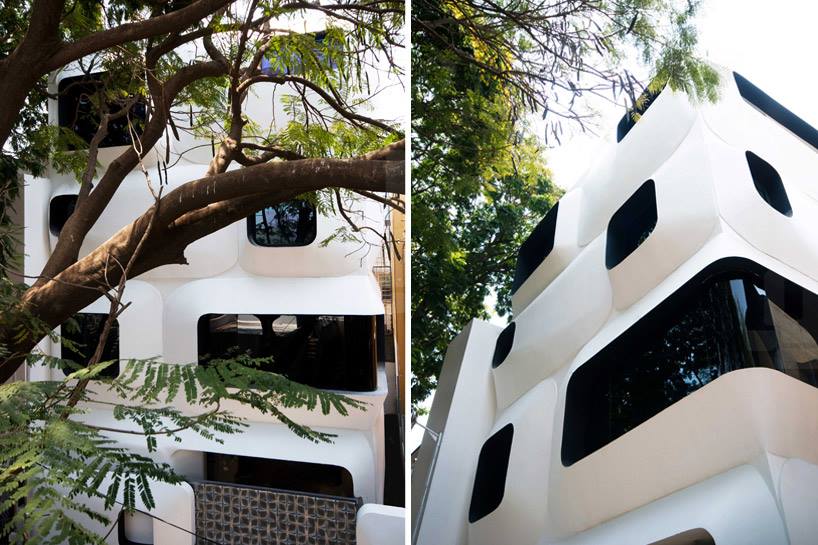 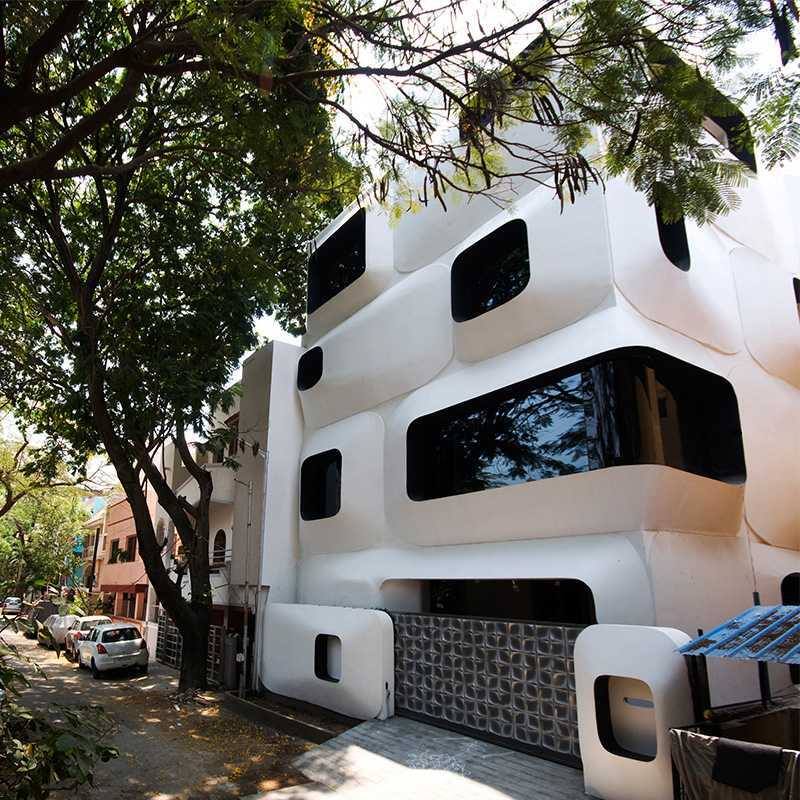 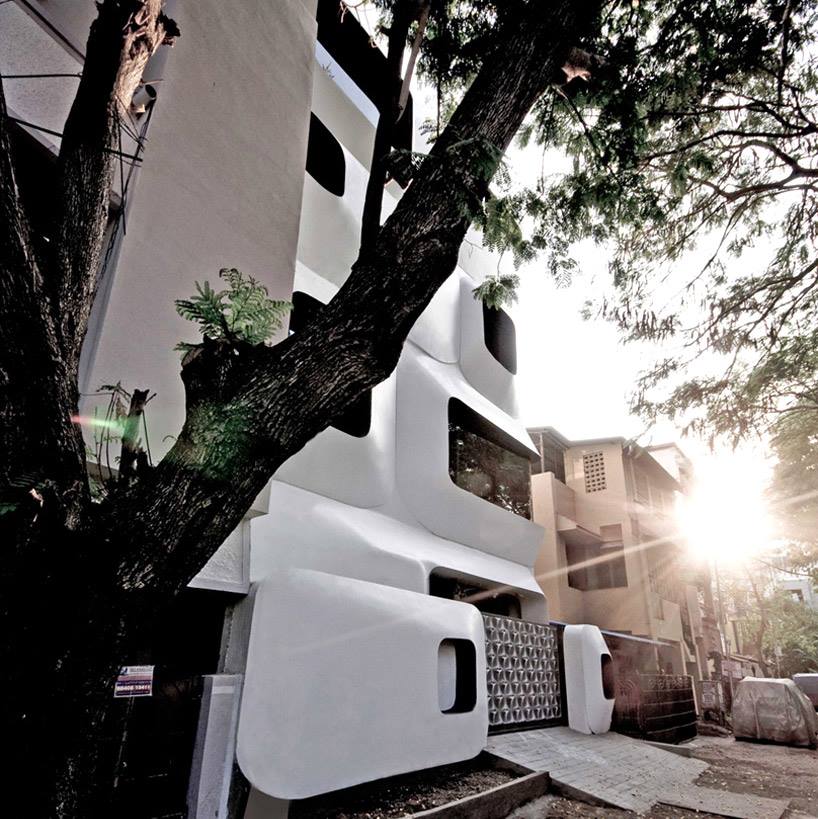 the residence is located on a plot of 110 m² in a dense urban environment. its undulating appearance clearly sets apart in the neighborhood.
this was done consciously to challenge the rigid edges of the site, and formally absorb all visible in a grid in the environment.
the & rsquo; concrete shell bulbous is doubled wall, thickened to reduce heat gain and designed to form spaces of & rsquo; air, while the housing glazing management systems and custom built.
It was built using reinforced concrete, light cast up on wood, fiberglass and sheet- in mold steel.
most parties involved in the construction skilled masons and very little mechanized processes, to cut costs.

Rows of d & rsquo mouths round ventilation complement this impression. The walls, such as gelatin, double layer of cement: so the architects have provided a place for d & rsquo systems, insulation and thermal control of the house. To create a complex facade concrete blocks on wooden bases, cast in situ were used, Steel glass and the mold. In the center of the house is a courtyard.

Several staircases connect the private and public spaces, and the output on the roof around the pool. Despite the fact that the area of ​​ground on which the house is built in only 110 square meters, the sponsors were able to place here, three rooms, parking, bureau, room d & rsquo; guests, public space, a swimming pool and a lift.

He is principal designer and founder of SDEG in Bangalore, Inside one.

L & rsquo; University of Calgary hosted Sujit Nair of SDEG for his lecture, In a constant d & rsquo; commitment , in the context of the series of conferences Design Matters. With work experience as architect Zaha Hadid Architects in London, Nair project teams to have won several international design competitions – including the Aquatic Centre built for the London Olympics 2012. He was active in the education of architects as design critic invited to several schools & rsquo; architecture, and has lectured at d & rsquo forums; architect, design schools and’ public events.

M. Nair started his own business in Bangalore, which was something of & rsquo; architect always planned to do because he felt that & rsquo; it was important to & rsquo; be engaged in’ architectural environment of India.

Bangalore, l & rsquo; India is a big city, modern enough 8,5 millions of people, but like many emerging cities of & rsquo; India, there are a lot of contrasts in the way the city looks and feels. For me. Nair, the challenge for his firm & rsquo; architects is how to balance traditional and modern influences.

L & rsquo; India is a country with five thousand years & rsquo; history and it can be tricky managing architectural and urban issues difficult. For me. Nair, it is about "the way you use the traditional to create the & rsquo; abstract”. It was wonderful that M. Nair was able to travel so far to come visit and share experiences EVDS, designs and visions for the & rsquo; s future & rsquo; Indian architecture. 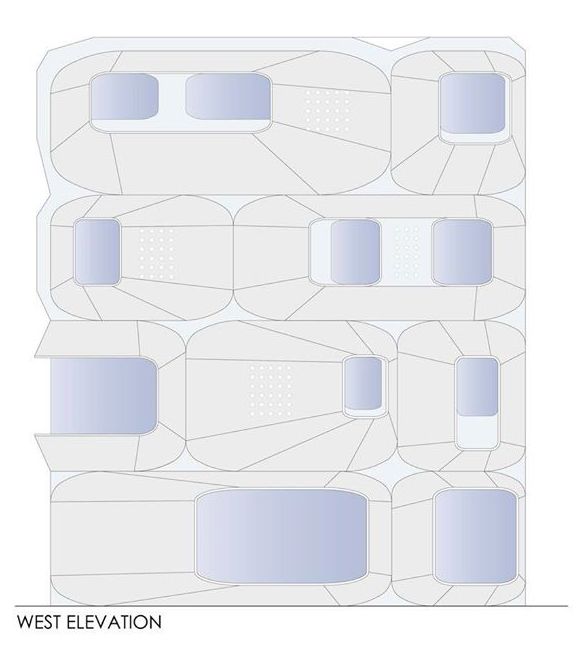 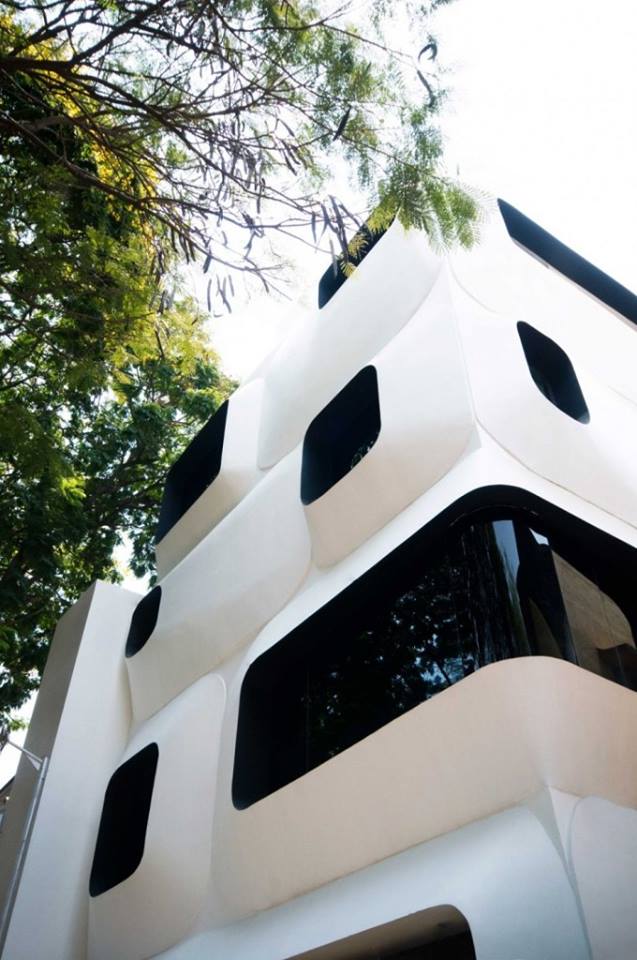 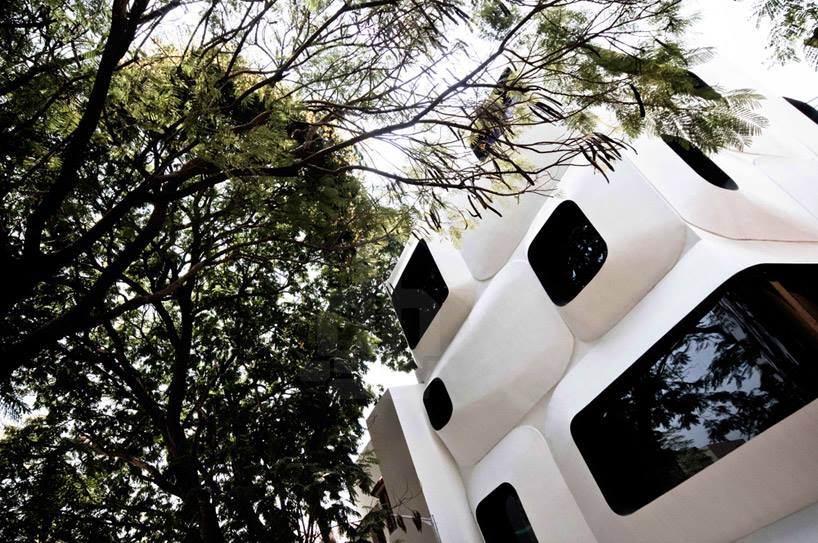 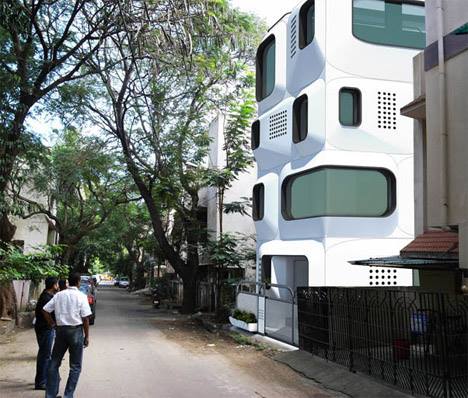 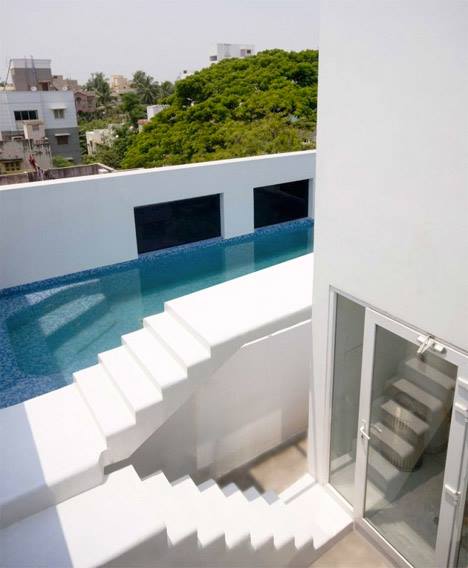 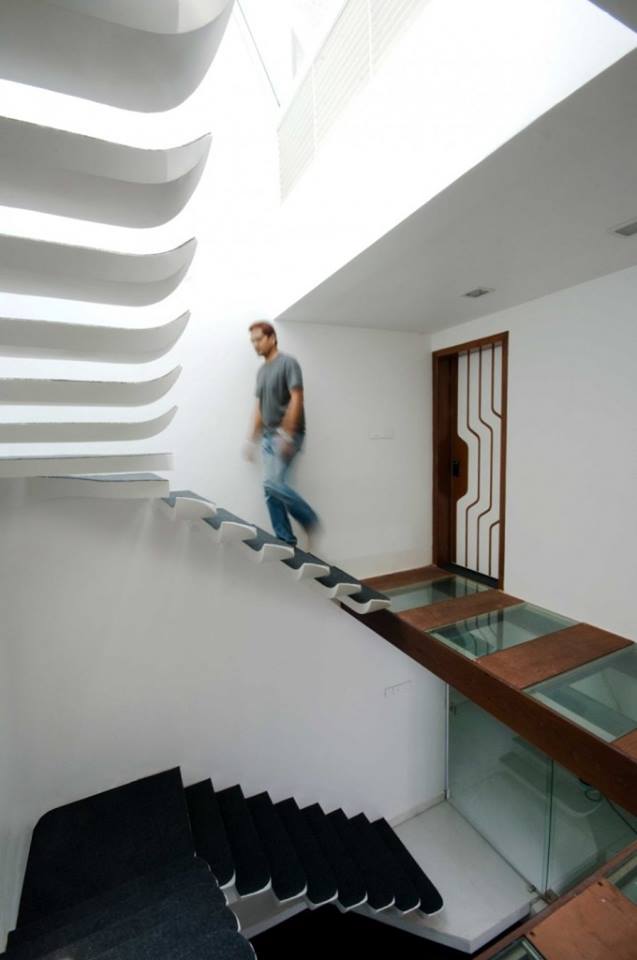 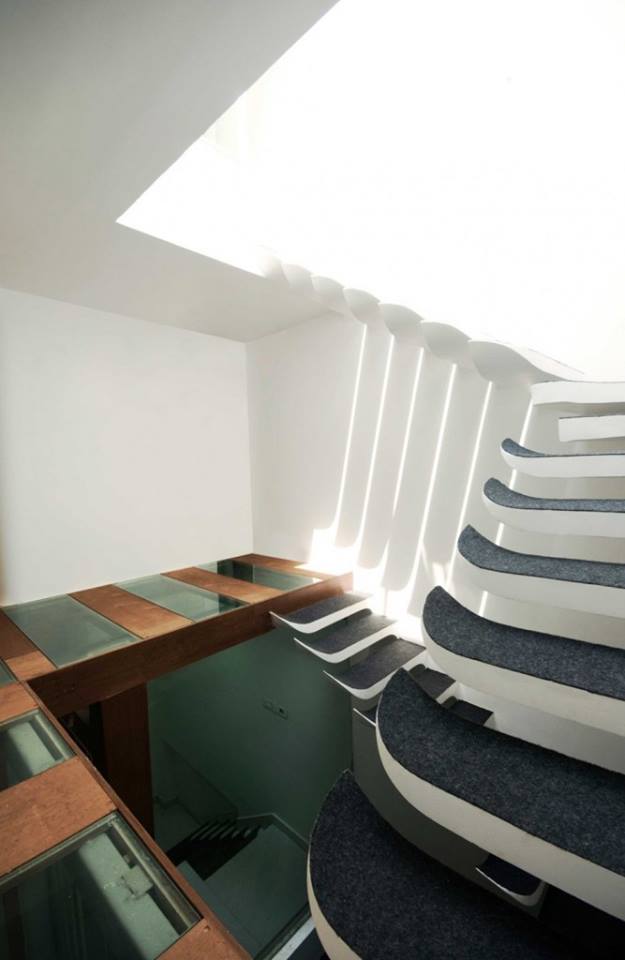 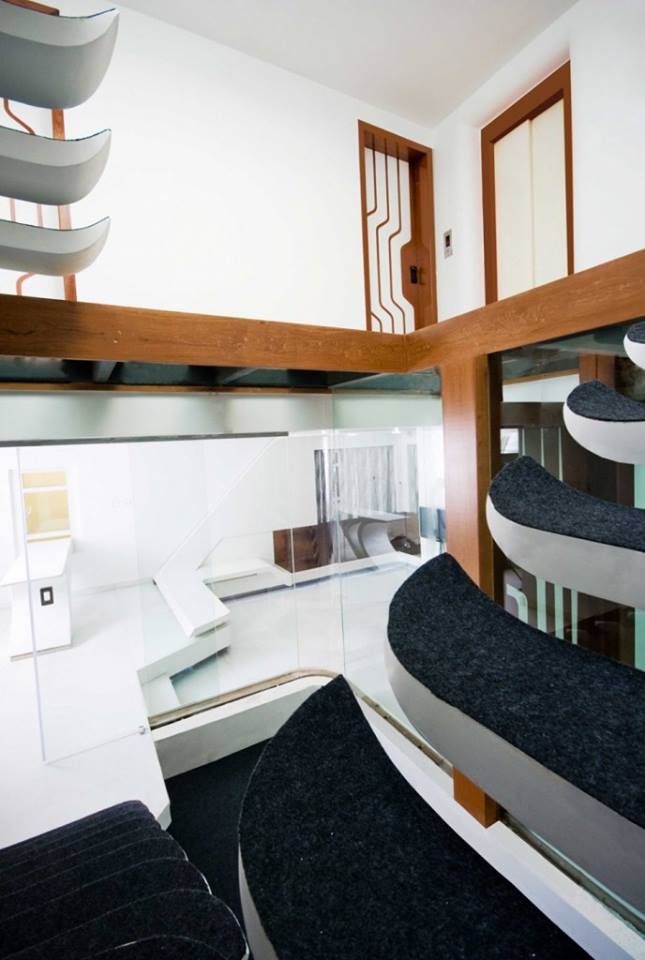 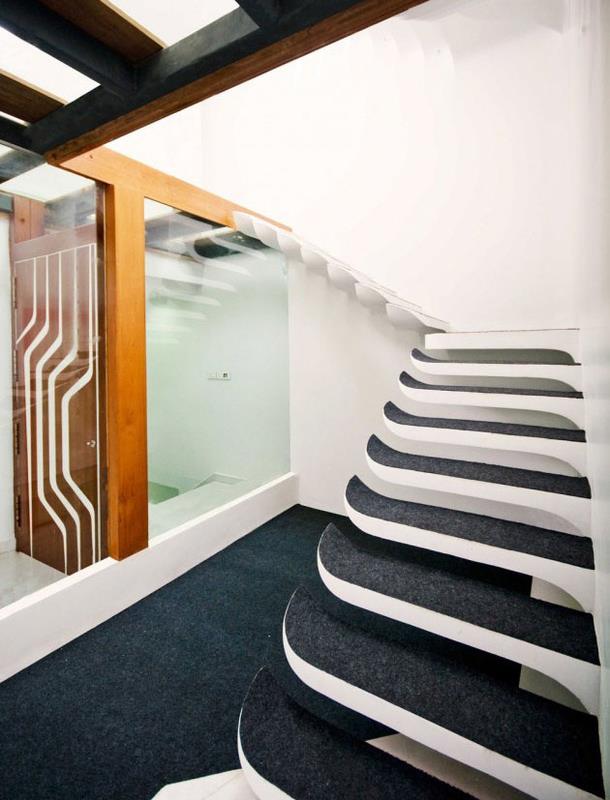 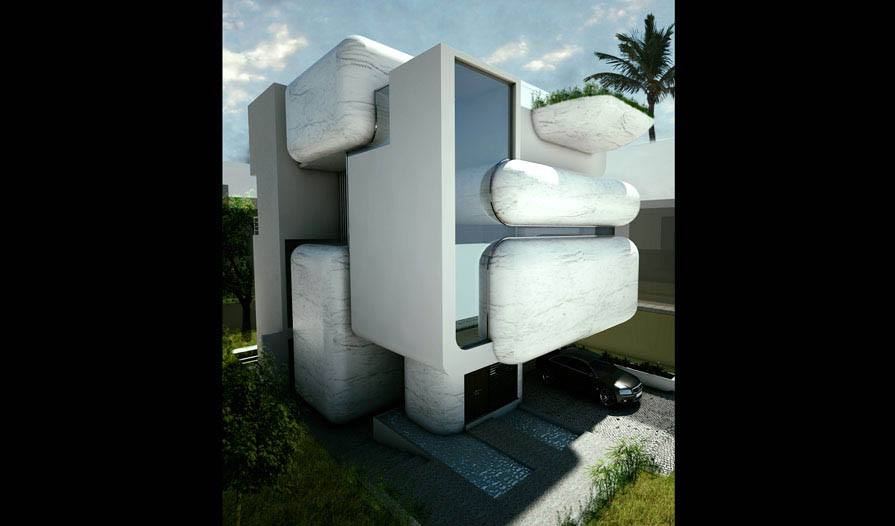