Represents a unique design of flowing shapes never before achieved-. The buildings housing cultural facilities, including a library and a concert hall, glow in the sunlight as bare five stones. Some of these free forms in three spectacular dimensions, wearing a futuristic metal facade, raise an ambitious 90m in the sky. For architects Snøhetta, This composition of horizontal and vertical buildings reflects the conflicts in Arab culture -among its ancient roots and visions for the future.

A cultural center, including a library and a concert hall, glow in the sunlight as bare five stones. Some of these free forms in three spectacular dimensions, wearing a futuristic metal facade, raise an ambitious 90m in the sky. For architects Snøhetta, This composition of horizontal and vertical buildings reflects the conflicts in Arab culture -among its ancient roots and visions for the future.

New photographs reveal forms of form rollers- Snøhetta cultural center of Saudi Arabia, which is nearing’ completion before its opening date scheduled for 2017. Snøhetta won a competition for the King Abdulaziz Center for World Culture in the city of Dhahran 2007, and began construction the following year.

The King Abdulaziz Center for World Culture will have a tangible impact by inspiring a passion for knowledge, creativity and intercultural commitment to the future of Saudi Arabia. The Centre consists of several components, and includes a library, a museum, visual installations and arts, Discovery Kids Zone, and a table of learning spaces at its plant in 80.000 square meters. The Centre is set to positively impact and influence millions of lives each year through its website, off-site and online programs.

The complex includes a collection of bulbous forms covered in metal pipe lengths. The tube follows the contours of the building, windows and doors surrounding, but bands of the facade are left uncovered to reveal the metal structure. 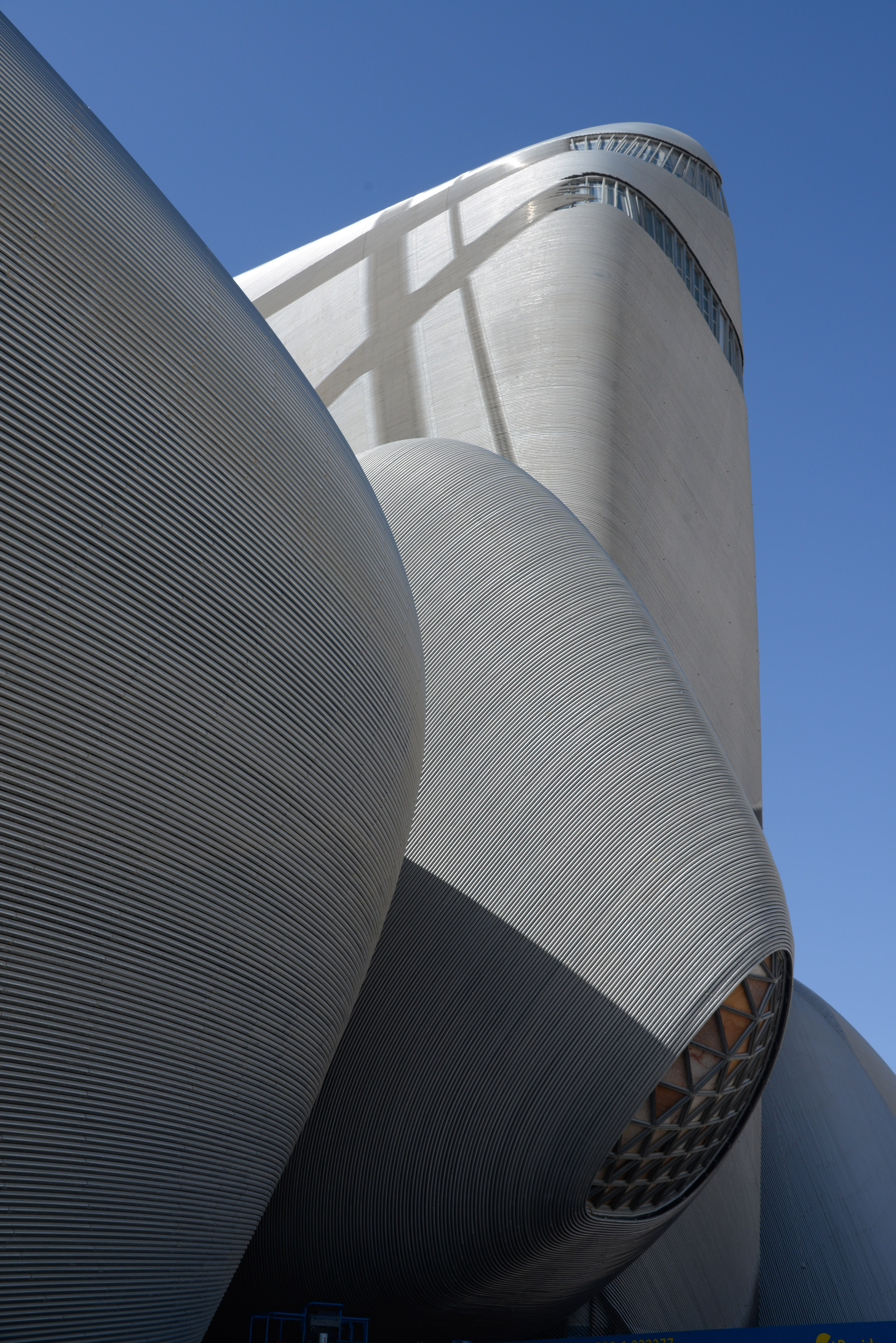 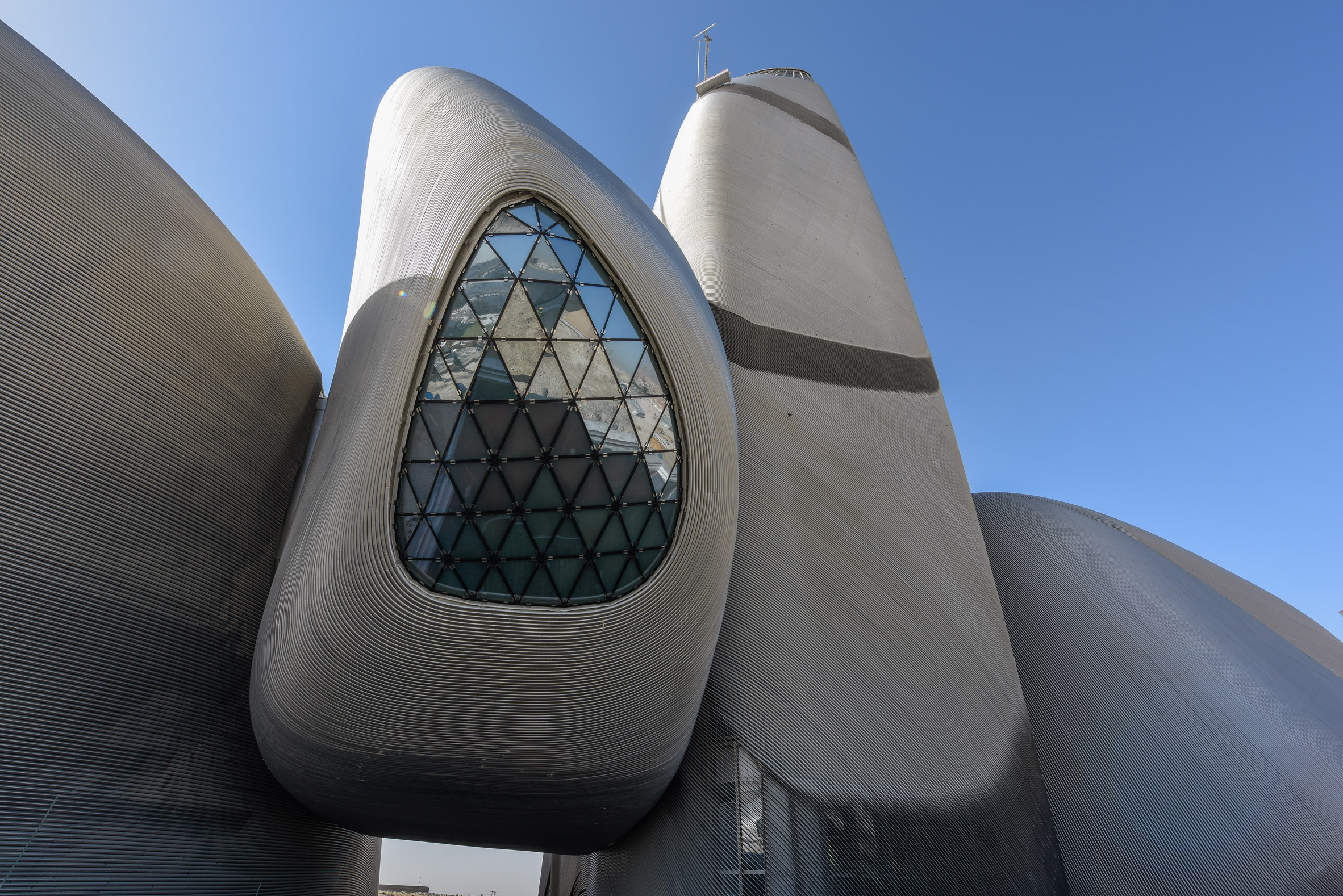 “The facilities of the museum and archives connect the cultural life of the past in the center and the roots of the company from which the center is designed”, said the studio, which opens its become a “cultural landmark on a regional basis, national and global horizon ".

mapping the video KACWC building in Dhahran in Saudi Arabia

Nov-Dec 2016. The King Abdulaziz Center for World Culture in Dhahran was inaugurated by Filmmaster MEA. Visual Solutions of Belgium has technically designed the show in less than 1 month. 52 projectors (barco mix of HDQ40 and HDF W30).

Each tube surrounding the King Abdulaziz Center for World Culture in Dhahran Saudi Arabia is as unique as the Dynobend machine that created them and measured. The absolute centerpiece of Dynobend portfolio.

It is a wonderful building project, coated rolled 3D, Both round and flat oval tubes with a total length of 365 km, wherein each length of 6 meters has a unique geometry. A feat of architecture at an extremely high level. This tube circus together, including the five buildings were built, was bent on 2 bending machines that were built and developed here Dynobend. Each individual folding machine is connected to a, by Dynobend developed, a measurement system for 6 counters products, Therefore, the entire system is self-learning and correcting for efficiency and maximum control. All products have been produced in Europe, after which the ready products were transported by ship to Saudi Arabia. Corrections on site are not possible therefore, Products must be manufactured 100% certainty with total loss only 0,5%.

rolling 6 meters of flat oval tubes in each desired geometry
rolling heads controlled separately for varying distances roll
Driving with a mandrel causing the flat oval tube to be locked inside and outside during the whole process
Especially for this technology and application process tools developed
DYNOBEND® MS6000: Measure up tube installation 6 meters

marking unit for applying indicia to the attachment points, sawing lines, axis and barcode for unique identification on round and flat oval tubes.3D software was customized products can be prepared offline included. simulation and validation.

To help promote world culture and proud heritage of Saudi Arabia, King Abdulaziz Center for World Culture designed by Snøhetta is rising in the desert near Dhahran in the east. As part of this project, we created two short films - one to tell the story of the concept and the creation of the building, and the other to show the excitation and the potential of the building in use.

The movies start with intriguing images of growing Saudi soil building, then weave new images of the Saudi landscape and people, high quality animations, graphics and music specially controlled. Our biggest challenges included modeling 500 kilometers of steel tubes that wrap the building is expected to open in 2017.