Kurokawa Kisho (Nagoya) 1934-2007 (Tokyo) is a Japanese architect and a founder of the movement called the "metabolism".

The metabolism has had very few opportunities to translate its principles into built projects, Capsule Tower and Nakagin, built between 1970 and 1972 par Kisho Kurokawa dans le quartier de Shimbashi à Tokyo, is probably the most famous example. The two concrete towers of the building, from 11 and 13 floors, are connected to each other and have a staircase and elevator shaft in the center of each. They are home to a total of 140 prefabricated capsules, each independent of its neighbor, set as a projection from the central supporting frame.

The Capsule Tower Nakagin ( The central bank Capsule Tower Nakagin Kapuseru TAWA ) Tower is a mixed use of’ residential and office designed by architect Kisho Kurokawa and located in Shimbashi , Tokyo , Japan . Completed in only 30 days 1972, the building is a rare surviving example of Japanese Metabolism , an iconic architectural movement of cultural resurgence postwar Japan.

It was the first capsule architecture example in the world built for permanent use and practical. The building still exists but has fallen into disuse. In October 2012, thirty capsules on 140 were still used as apartments, while others were used for storage or offices, or simply abandoned and left to the state of deterioration. After joining in September 2015 EYExplore the photography company, Tokyo-based, transferred its office in one of the capsules, declarer: "We wanted to take a stand and be part of this unique historic building instead of being helpless spectators. No later than August 2017, capsules could still be rented (relatively inexpensive, given the locality of Ginza ), although the waiting list remains long.

Designed by architect Kisho Kurokawa is located in the Shimbashi district. This round 13 floors, 144 individual capsules (140 homes / offices) modular installed in the Tokyo neighborhood EST, its first tenants came from 1972.

By Katie Forster This photo taken on 9 September 2014 shows Nakagin Capsule Tower resident Masato Abe in his room in Tokyo. The 140 Nakagin units represent a special part of architectural history and one that deserves to be protected from demolition projects. About half of the capsules, designed by Japanese architect Kisho Kurokawa in 1972, are currently used as offices, art studios and second homes, more 20 small spaces are full time homes. PHOTO AFP / Yoshikazu TSUNO (Photo par Yoshikazu TSUNO / AFP).

Scheduled to last 25 years, the Nakagin Capsule Tower still stands today despite the threat of destruction hanging over this experimental monument which could or should have been listed with UNESCO. 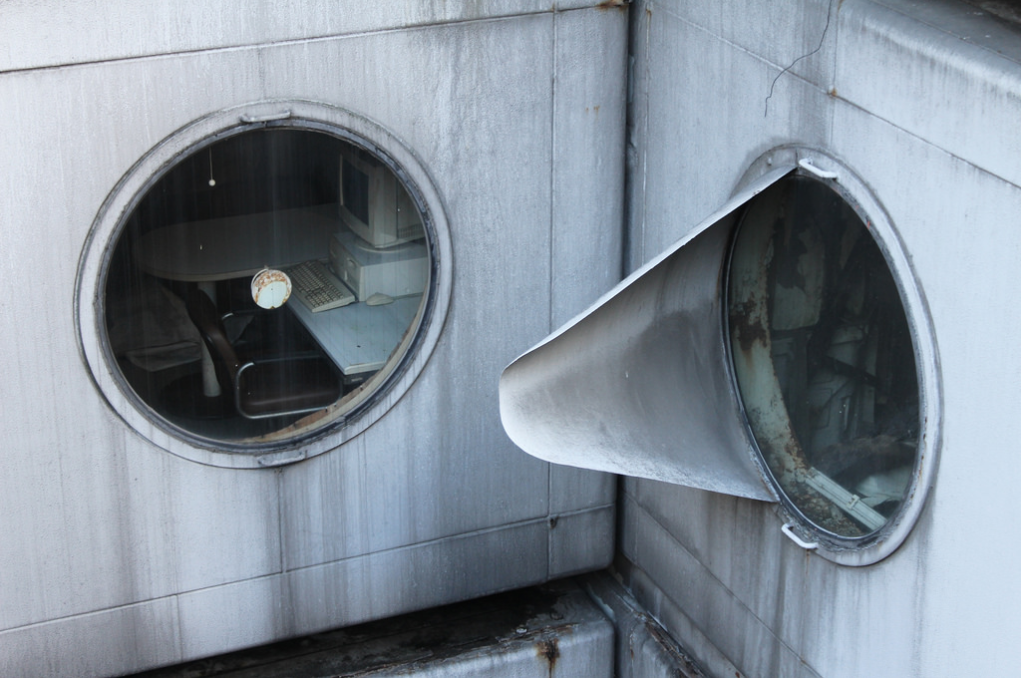 The structure has been somewhat neglected, poorly maintained over the 30 last years..

These capsules will be dismantled to be saved !

The Takara Pavilion Expo '70 represented the brand Takara Japanese furniture and contained a large sample of items sold by the company. The main structural parts of the building consisted of 12 metal pipes, assembled in fours, generating a cubic space which housed each exposure capsules. The entire construction was dry and it took a few days to build all the main skeleton of the pavilion, since the capsules were already equipped with the sample of the Takara Company. The design of the structure is addressed through the fallen petals of the cherry blossom, that evokes the Japanese spirit of bushido, which in the Buddhist ritual encourages living beings and generates in harmony with nature beauty.

Archeology of the Future