Robert Eugene Winfield (1927)
The Reactor (1965) is an American automobile designer for the cinema. 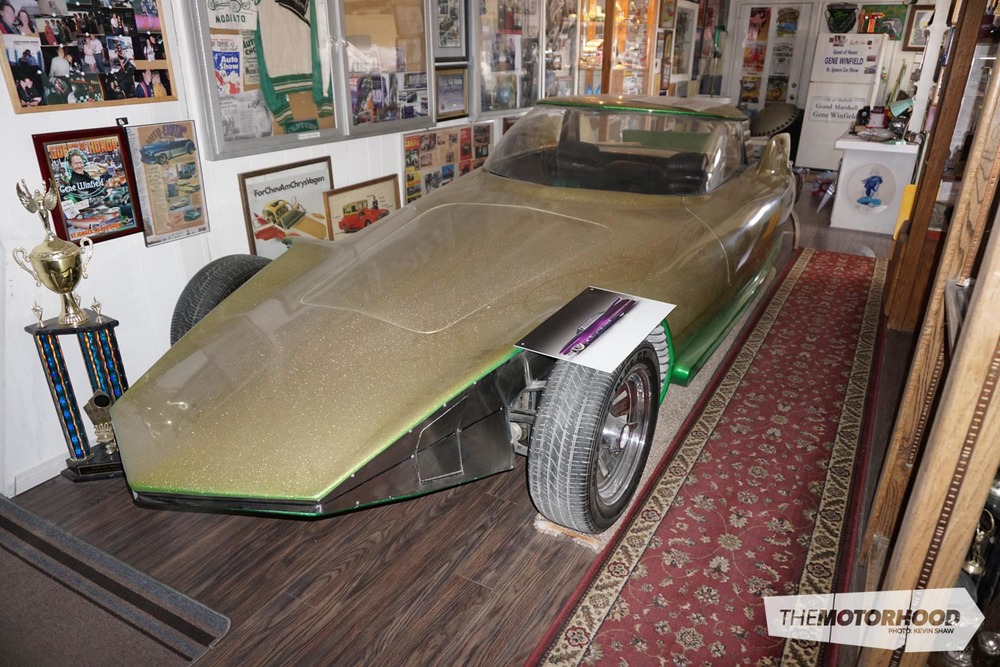 A visit to the shop and its Gene Winfield Museum

He returns to travel back in time and give a fantastic insight into his life.

The Reactor is an aluminum car built by Gene Winfield for the Connecticut Auto Show in 1965.

It costed $ 20 000 dollars to build it. The car was low and elegant, with a long, angled front end and a striking concave curve at the back. The doors, retractable headlights, the windshield and the plexiglass roof were activated by a switch. The car was created around a Citroën DS chassis and its unique hydropneumatic suspension, which allowed him to go up and down, a characteristic far ahead of its time. “The inspiration I had for the car was to do something different, something wild”, said Winfield. He installed a turbocharged engine of 180 horses on a Chevrolet Corvair Corsa and associated it with the transmission of the Citroen DS. Reactor started as a two-seater, mid-engine car. Its most obvious feature is its very low profile. With tip, Winfield used the Corvair flat-6 engine as a styling tool, because he wanted the reactor to be as low and as close to the ground as possible. The original Citroën air suspension was left intact. The reactor, l’Autorama Special, as the owner Kizis said then could be considerably raised and lowered. The car was a hit at the Hartford Autorama, but Kizis sold it to Winfield soon after, and it was officially renamed The Reactor.

After a little interview, Winfield toured Hollywood with the car, where he featured prominently in episodes of several television shows, notamment «Bewitched», the Super Car, «Star Trek», known as Jupiter 8. and even "Batman", where he developed ears and a tail to become the Catmobile.

Pebble Beach, California (29 June 2017) Astronauts whose dreams are too big for a small town often pack their bags and head to a Hollywood town.

Winfield originally imagined and built The Reactor for the annual auto show 1965 by Joe Kizis in Hartford, in Connecticut. After spending his time touring the east, Winfield brought the reactor back to California, where he went to the Grand National Roadster Show. Against the tough competition, the reactor won the coveted tournament of fame award. Winfield quickly realized bigger dreams for his car. So, he packed the reactor and brought it to Hollywood, where he caught the attention of the main directors. "I did not know anyone", recalled Winfield, "But I found the 20th Century Fox studios and went up to the door to bring them to show me my car at their transportation service. Of the, the transport coordinator gave me the names and addresses of all the other studios and for two days, I took the car and distributed my business card. Two weeks later, Bewitched called me and said they wanted the reactor to be on their shelf. The Reactor starred in an episode of Bewitched titled "The Super Car", designed to showcase the exciting capabilities of the futuristic car. suspension adjustable in height.