Entirely made of plastic, this completely circular villa was designed by Swedish architect Staffan Berglund for Danish airline magnate Simon Spies ; for years ignored by architecture critics, it has recently been revisited in a monograph.
A futuristic pavilion designed by hedonistic 1969 by the young Swedish designer Staffan Berglund visionaries and wealthy Danish business genius Simon Spies. It is located on the crest of a rock Torö, Sweden, overlooking the ocean and the archipelago around Stockholm, the Swedish capital.

The Spies Villa also called Villa Fjolle a villa on the island Torö outside Nynäshamn in the Stockholm archipelago, which was built in 1969 for the Danish businessman Simon Spies was designed by architect Staffan Berglund.

Swedish architect Staffan Berglund won the competition with a single story building which showed a circular building with a concrete roof. Staffan Berglund got the job to design the Spies Simon private villa on a high ledge west of Toro.

There are several differences between Spies Villa and the original competition project, including the villa has two floors, the lower level is similar to a large circular bowl concrete. The roof is a self-supporting dome consisting of a prefab of fiberglass elements and a thickness of 10 centimeters. The center of the roof releases a dome of light. The house was built in three months. The Dome was delivered in triangular segments which could be lifted in place by two men. No cranes were needed. It was precisely the plastic ceiling that delayed the municipal building permit, it was feared that the storms could lift and blow away, but the meticulous calculations by KTH has proven otherwise.

In 1967, an architectural competition is organized by the Danish travel agency and the charter airline Spies, Scandinavia’s greatest travel success story of its time.
A number of architects from Scandinavia and Spain are invited. The task is to design a prototype of a mass-produced holiday home for Scandinavian tourists traveling to Spain who do not wish to stay in a traditional hotel.

Villa Spies was in an architecture competition launched by Spies travel companies 1967. guests were a number of architects from Scandinavia and Spain. The project was to create new housing for charter flights in Spain instead of traditional rooms and simply designed.

Swedish architect Staffan Berglund wins competition. His proposal concerns a circular one-story house, surmounted by a dome, completely plastic. The holiday home adapts to any site, at the beach and in the mountains, and wants to be exciting, an experience in itself.

One feature of the villa is a round dining room of the house in the middle that can be raised and lowered between floors. Lowering his group to the kitchen on the lower level or raised above the dome roof, where you can enjoy the view. Other technological innovations are electric blackout windows, the adjustment of the indoor environment by climate change, lighting and sound as well as several slide projectors that project images on the walls and ceiling. Everything is controlled from an orange plastic panel, Built in sofa.

In return, Staffan Berglund gets to control make this house in Sweden for Simon Spies in Toro. Some technical changes have been made compared to the initial project, but the spirit remains the same, and all interiors are white. 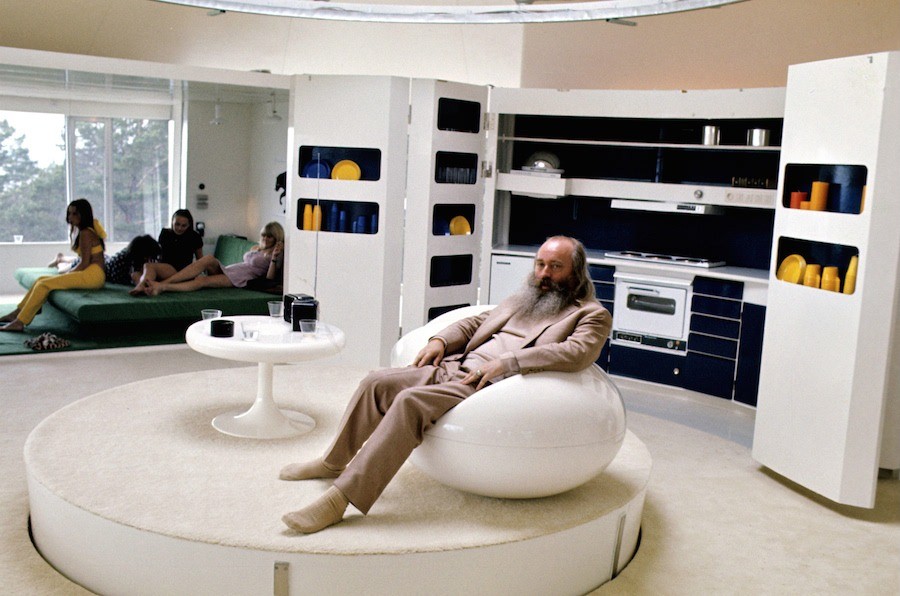 The only exception is the very seventies warm red color of the control panel conveniently located on top of the backrest of the long curved white sofa from which all the technical finesse of the house is monitored and controlled..

The sofa in the picture sitting on a wall with a large window. The window below the surface of the water in the pool so that he can sit and watch the girls bathe.

The aim of the competition was to design a prototype of a vacation home for mass production for Scandinavian tourists to stay in Spain.

This circular house, a dome was entirely of plastic, and adaptable to any site (beach, Mountain), and conceived as an experience in itself with movable walls, storage sections and screens rather than cardboard partitions to let the light, headphones for those who wish to listen to music or watch TV without disturbing other diners. Only the main room was completely separated behind soundproof walls.